The prize distribution function is important for encouraging the efficient working of a school. It comes only once a year. This generates new enthusiasm in the students. A strong link is established between the parents of the students and the school staff. This function holds great significance in the school diary.

This year the prize distribution function attracted a large audience consisting of parents and invitees. This prize-giving function of the school was held on the fifteenth of January. The director of education was invited to grace the occasion as the chief guest. The preparations for the function started a month earlier. The school building was whitewashed. The school hall where the function was to be held, was beautifully decorated with pictures and charts.

On the appointed day, a beautiful table and some chairs were placed on the stage. The carpets were spread to accommodate the children and in the remaining part of the hall, chairs were arranged. The front rows were reserved for teachers and invitees. The function was supposed to start at 4 p.m. By 3.45 p.m. the hall was jam-packed with visitors who were very impressed with the arrangements made by the students. In one corner, there was a table where the prizes and trophies had been arranged. Now, all of us were eagerly waiting for the arrival of the chief guest.

At the appointed time, the director of education arrived. He was accorded a warm welcome by the principal and the senior members of the school staff. As he entered the hall, the school band played in his honour. All the students and the audience stood up as a mark of respect. The director of education was garlanded by the principal and by some senior members of the staff. As soon as the chief guest occupied his seat, there was pin-drop silence in the hall.

The principal began by giving a brief introduction and a life sketch of the chief guest. Later, she read the annual report of the school, giving an account of the past achievements of the school. At the same time, she requested the chief guest to enhance the annual grant which was quite insufficient in view of the students’ interest in manifold activities. 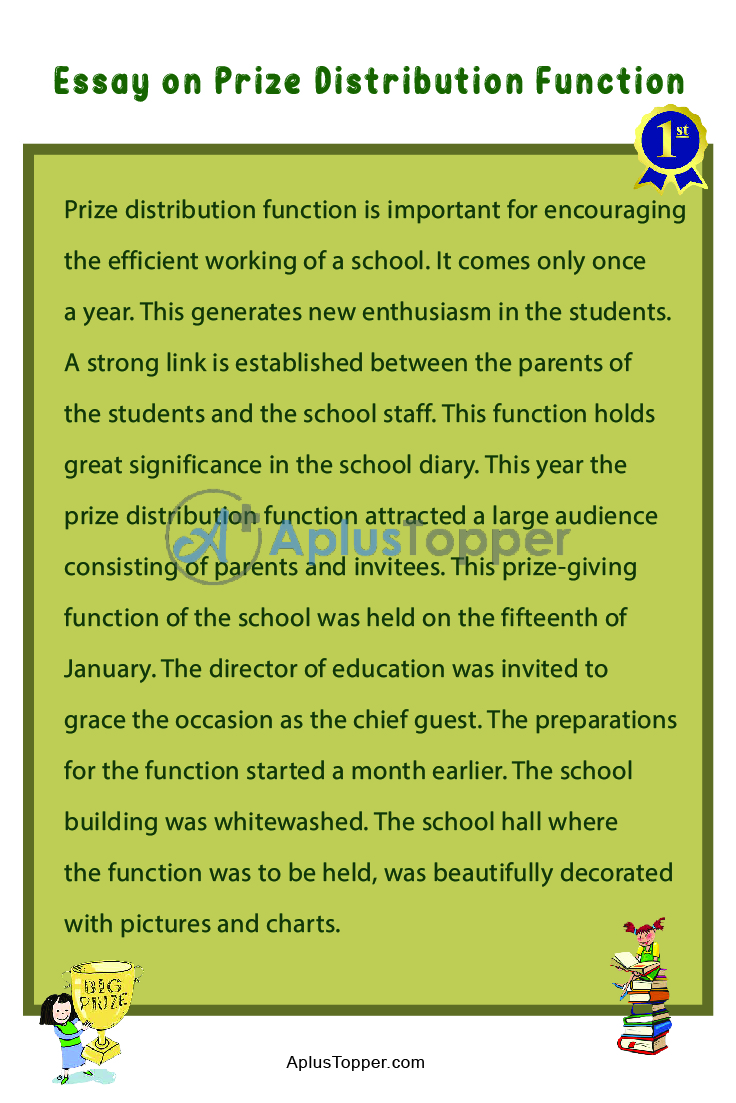 The principal instructed the president of the Literary Club to begin with the cultural programme. Some students sang melodious songs. “Prince and the Wood Cutter” of Six One-Act Plays were staged next. The participants got thunderous applause from the audience for the wonderful talent that they displayed in acting and presentation. The students who took part in this play seemed to be well-prepared. Folk dances added a colourful touch to the show.

The chief guest who presided over the function gave away the prizes to the winners. I got a trophy for getting the first rank in my class and a certificate for my runner-up position in the drawing competition. I felt elated as my parents and my little sister encouraged and praised me. The director delivered a short speech wherein he praised the performance of the students and encouraged them to participate still more enthusiastically. He also admired the sense of discipline imbibed by the students during the entire function. Then the principal got up and thanked the director for his kind visit to the school.

Finally, the function came to an end with everyone singing the National Anthem. The following day was declared a holiday by the principal.