Pollution and Its Effects Essay: Coronavirus pandemic has thought us many things but one of the most important things that it has made us realize is that how irresponsibly we have overexploited nature that nature itself has to start intervening so that the Earth starts healing. Many environmentalists and experts have suggested that the coronavirus pandemic, the locust swarms attack, the Australian wildfires and many more catastrophic events that we have been seen in 2020 are just the beginning of the effects of climate change and global warming.

In this particular essay on pollution and its effects, we shall be talking about the effects that we have been seeing in 2020 and what the future holds for us if we don’t control the overexploitation of our nature.

600-word long Effects of pollution essay and 200-word short essay on effects of pollution are provided in this article. Both the essays can be used by students of class 6, 7, 8, 9, 10, 11 and 12 for test, examination, homework, assignment and essay writing competition.

Long Essay on Pollution and Its Effects 600 Words in English

Long Essay about Pollution and its Effects is usually given to classes 7, 8, 9, and 10.

The nation has started to the consequences of pollution and before the man realises it, the world as we know it would have been changed. Terms like social distancing, cleanliness and hygiene have become a household word in the past few months, all thanks to the COVID-19 pandemic that has gripped the entire world. In this year alone we have seen earthquakes in certain parts of India, the pandemic that started from China, the forest fires in Australia, the volcanic eruptions in parts of New Zealand and many more catastrophic events that are trying to send out a message to humankind. In the last 60 years, the world has seen exponential economic growth and the cost of this economic growth is borne by the natural resources of the world.

The health of the economic engine that our leaders are worried about has conveniently forgotten the kind of negative impact that we are having on our environment because of this economic growth. From air pollution and water pollution to soil pollution and land pollution, we have not spared any aspect of our ecosystem from getting polluted. It can be said without an ounce of doubt that the greed of man and the hunger to make money has resulted in the events that we are witnessing in the year 2020.

In this pollution and its effects essay, I shall be talking about the effects that we are seeing in the year 2020 alone and how this effect can be traced back to the pollution that has been happening in the last 60 to 70 years in the world.

The Australian forest for that we witnessed in the month of January in the year 2020 was not something that happened all of a sudden. It was the effect of air pollution and global warming that has been gradually happening in the world in the last hundred years because of rapid industrialization and urbanization. Accumulation of greenhouse gases in the atmosphere has resulted in an increase in the average temperature of the earth as a result of which many wildlife has been wiped out of the face of the planet. To fill the growing population, forest lands are being converted into agricultural lands and many forests have been converted into cities as a result of which the oxygen content in the atmosphere is being reduced. An amalgamation of all these effects was what the world witnessed in the Australian forest fires at the start of the Year.

Recently we witnessed one of the worst cyclonic storms which hit the east coast and the west coast of India. The cyclones created massive havoc across the states of West Bengal, Orissa, Andhra Pradesh, Telangana, Maharashtra, Karnataka and Gujarat. Thousands of people were killed, lack of people displaced from their homes and properties worth of billions of dollars were damaged. Such cyclonic events and storms are a result of constant climate change and global warming around the world. The carbon footprint from each country has been increasing every year as a result of which the ocean currents on the planet have taken a different route leading to such floods, storms and earthquakes.

I would like to conclude by saying that the above two examples are a very minute example of the effects of pollution on our planet. If governments, citizens and the international community do not come forward to find long-lasting solutions to the problem of pollution, then it won’t be too long before the entire human race to be wiped out from the face of the planet because humans are no match to the force of nature. Short Essay on Pollution and Its Effects 200 Words in English

Pollution has been a growing concern around the world and the effects of which people are not able to comprehend fully. In the year 2020 itself, we have been seen the effects of pollution, climate change and global warming in every country through floods and massive earthquakes, forest fires and volcanic eruptions. The greed of every country, every government and every business to make profits at the cost of exploiting nature has been resulting in the depletion of natural resources and pollution of our ecosystem. Urbanization, industrialization, population explosion and expansion of agricultural lands have been putting enormous pressure on our air, water and soil resulting in changing the structural dynamics of our ecosystem.

From air pollution to soil pollution to water pollution, every impact of this pollution ultimately is suffered by human beings and other living beings that we share our planet with. It is because of the greed and irresponsibility that we have polluted these natural resources and as a result of which innocent animals in forest and wildlife are facing the brunt of our actions. Before the impacts of this pollution go out of our control, the international community has to come forward to reduce the carbon footprint to use alternative energy and green energy such as nuclear energy or electric energy and create a better place for the next generation to live without having to face the negative impacts of the pollution that we have created for them.

10 Lines on Pollution and Its Effects Essay in English 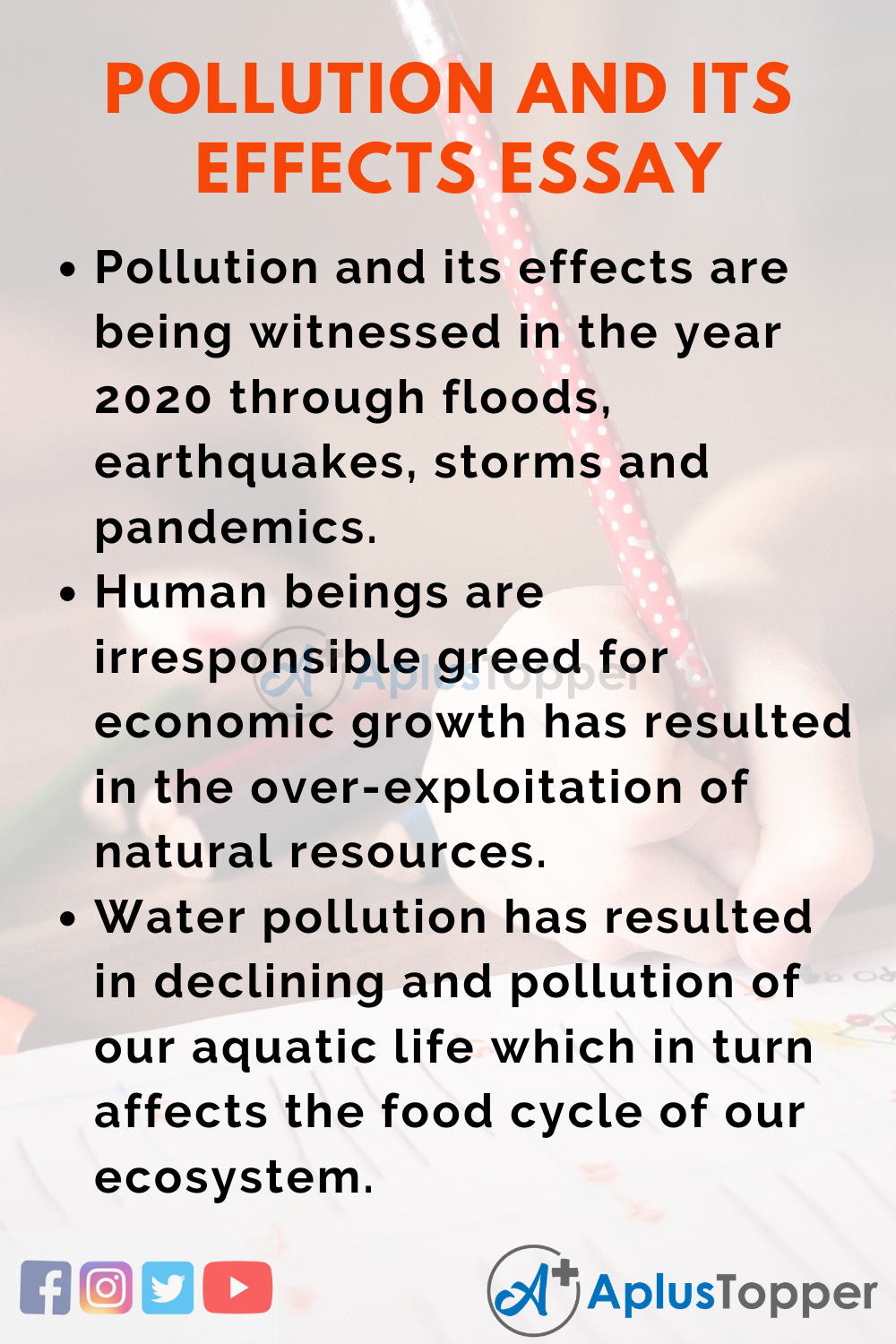 FAQ’s on Pollution and its Effects Essay

Question 1.
What are the main effects of pollution on our planet?

Answer:
Floods, earthquakes, an increase in global warming, increasing the average temperature of the earth, storms, volcanic eruptions and decline in natural resources are some of the very few effects of pollution that we are already witnessing.

Question 2.
How to prevent pollution of our natural resources?

Answer:
Use of the alternative renewable source of energy such as nuclear energy or oceanic energy or wind energy or solar energy is the first step in preventing pollution and exploitation of our natural resources.

Question 3.
How to keep the economy and the ecosystem in a healthy condition?

Answer:
use of alternative forms of energy and giving priority to scientific and engineering innovations to create sustainable economic growth, without harming the ecosystem is the way forward

Question 4.
Which is the worst country in terms of carbon footprint?

Answer:
In terms of carbon footprint being produced, China and the USA are the worst countries on the planet.