Kerala Plus Two Macroeconomics Chapter Wise Questions and Answers Chapter 5 The Government: Budget and The Economy

Plus Two Economics The Government: Budget and The Economy One Mark Questions and Answers

Question 2.
Which among the following is a tax revenue?
(i) Fees
(ii) Fine
(iii) GST
(iv) Profit
Answer:
(iii) GST

Plus Two Economics The Government: Budget and The Economy Two Mark Questions and Answers

Question 3.
Find the odd man out and reason.

Question 5.
Classify the following into revenue expenditure and capital expenditure. (2)
(a) Interest payment on debit.
(b) Investment in share
(c) Land and advances by central government to state.
(d) Grant given to state government.
Answer:

Question 6.
MGNREGA aims to increase the purchasing power of the lower income group.

Question 7.
Which of the following diagrams represent proportional taxation? Substantiate your answer.

Answer:
C. Because of tax rate increases in proportion to the change in income.

Plus Two Economics The Government: Budget and The Economy Three Mark Questions and Answers

This helps limit the upward fluctuation in consumption spending. During a recession when GDP falls, disposable income falls less sharply, and consumption does not drop as much as it otherwise would have fallen had the tax liability been fixed. This reduces the fall in aggregate demand and stabilizes the economy.

Question 3.
‘Deficits are not desirable for a government’ discuss the issue of deficit reduction.
Answer:
Government deficit can be reduced by an increase in taxes or reduction in expenditure. In India, the government has been trying to increase tax revenue with greater reliance on direct taxes (indirect taxes are regressive in nature -they impact all income groups equally).

There has also been an attempt to raise receipts through the sale of shares in PSUs. However, the major thrust has been towards reduction in government expenditure. This could be achieved through making government activities more efficient through better planning of programmes and better administration.

2. It is desirable for the modem state to spend more for the welfare of the people. However, huge expenses have caused burden for the government.

3. Therefore, I do not support external borrowings for meeting public expenditure. This is because; borrowing from abroad will again bring another burden on the government in the form of interest payment.

Question 5.
Are fiscal deficits necessarily inflationary?
Answer:
Fiscal deficits are generally treated as inflationary. Increase in govt, expenditure and cuts in taxes both leads to government deficit. Increased govt, expenditure and reduced taxes tend to increase the aggregate demand. Generally firms are not able to produce higher quantities that are demanded at the going prices.

Two features of public goods are nonrivalry in consumption and non-excludability.

Plus Two Economics The Government: Budget and The Economy Five Mark Questions and Answers

Question 2.
If the marginal propensity to consume
a) Govt. Expenditure multiplier
b) Tax multiplier
Answer: 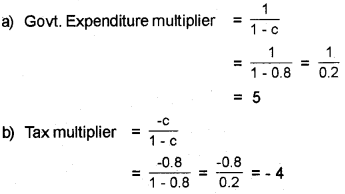 Question 3.
Match column B and C with column A.

Question 4.
Find the odd one out 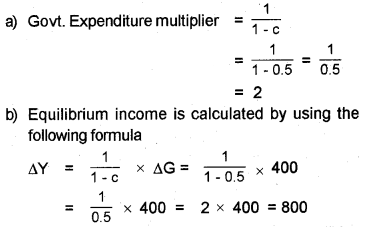 The deficit reduction influences the different sectors of an economy in different ways. The government is trying to fill the gap of reduced fiscal deficit by making government activities more efficient through better planning of programmes and better administration.

The cutting back government programmes in vital areas like agriculture, education, health, poverty alleviation has adverse effect on the economy. The same fiscal measures can lead to a large or small deficit government by the state of the economy. During recession period GDP falls which reduces tax revenue which increase the fiscal deficit.

Disposable income influences the consumption expenditure of households. Therefore, the tax multiplier is always less in absolute value than the govt, expenditure multiplier. 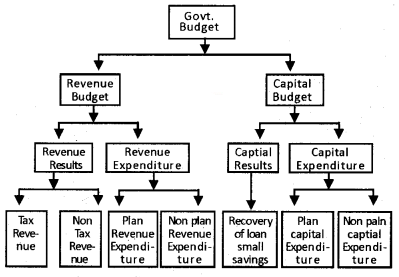 Question 10.
Match column B and C with Column A. 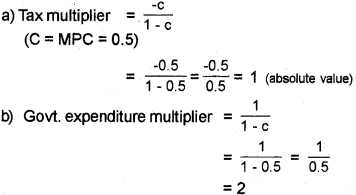 It is also argued that the consumer spending is based not only on their current income but also on their expected future income. There is another argument, debt does not matter because we owe to ourselves. This is because although there is a transfer of resources between generation, purchasing power remain within the nation. Any debt from foreign involves a burden.

Question 14.
Calssify the following into allocation, distribution and stabilization function of the government. (5)

Question 15.
“Provision of Public good is inevitable to maintain social justice.”
Evaluate the statement in light of the experience of our State in General Education and Public Health.
Answer:
Health and Education Indicators of Kerala. Government can achieve this which Market economy can’t.
\(=\frac{1-c}{1-c}=1\)

Plus Two Economics The Government: Budget and The Economy Eight Mark Questions and Answers 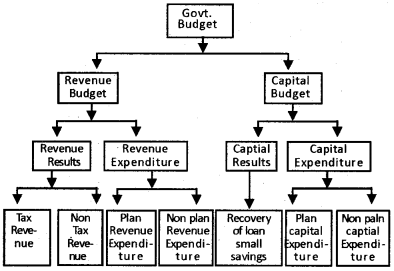 1. Revenue Deficit:
The revenue deficit refers to the excess of government’s revenue expenditure over revenue receipts.

3. Primary Deficit:
We must note that the borrowing requirement of the government includes interest obligations on accumulated debt. To obtain an estimate of borrowing on account of current expenditures exceeding revenues, we need to calculate what has been called the primary deficit. It is simply the fiscal deficit minus the interest payments.
Gross primary deficit = Gross fiscal deficit – net interest liabilities.

Question 4.
Represent in the diagram the effect of the following on the equilibrium level of income

2. Effect of a reduction in taxes
When there is a tax cut, there will be an increase in consumption and output. Therefore, the equilibrium level Of income increases as shown in the diagram.

Question 5.
The equilibrium of an economy is given below.

Govt, expenditure is one of the components of AD. AD = C + I + G + (x – m)
So the AD curve shifts upward when there is an increase in the govt, expenditure. As a result, the equilibrium changes from e to e1. The level of output increases from y to y1.

It can be seen from the diagram that the increase in govt, expenditure is from A to A1 But the output increased from y to y1 This is because of multiplier effect. The effect of an increased tax on the level of output is given in the diagram below.