Plus Two Economics Money and Banking One Mark Questions and Answers

Question 1.
Match columns B and C with A.

Question 3.
‘Every loan creates a credit’. How can you connect this with the function of commercial bank?
Answer:
Banks can create credit. When a person goes to the bank and asks for a loan by providing required security, the bank grants the loan. The loan amount is not directly paid to the borrower in cash. Instead, it is deposited into an account operated by the borrower. Thus, every loan creates a deposit. This is known as credit creation.

Question 4.
How do changes in cash reserve ratio affect the availability of credit? Explain.
Answer:
The commercial banks have to keep a fraction of its deposits as reserves in the form of cash with the central bank. When this cash reserve ratio is increased, the liquidity of banks reduces and so does their credit creating capacity. This lowers excess demand in an economy. To increase demand, the cash reserve ratio is lowered so that the banks can create more credit.

Question 9.
Identify and explain the situation shown in the diagram.

Answer:
Liquidity Trap:
A situation in the economy may arise when everyone will hold their wealth in money balance. If additional money is injected into the economy, it will not be used to purchase bonds. It will be used to satisfy the people’s drawing for money balance without lowering the rate of interest. Such a situation is called ‘liquidity trap’.

Question 1.
Make a tabular presentation of the measure of money supply in India.
Answer:
The total stock of money in circulation among the public at a particular point of time is called money supply. RBI publishes figures for four alternative measures of money supply, viz. M1 M2 M3and M4. They are defined as follows.

M = CU + DD = (1 + cdr) DD where, cdr = CU/DD. Assume, for simplicity, that treasury deposit of the Government with RBI is zero. High powered money then consists of currency held by the public and reserves of the commercial banks, which include vault cash and banks’ deposits with RBI. Thus H = CU + R = cdr.DD + rdr.DD = (cdr+ rdr)DD Thus the ratio of money supply to high powered money.

Question 4.
Prepare a note on High Powered Money.
Answer:
The total liability of the monetary authority of the country, RBI, is called the monetary base or high powered money. It consists of currency (notes and coins in circulation with the public and vault cash of commercial banks) and deposits held by the Government of India and commercial banks with RBI.

If a member of the public produces a currency note to RBI the latter must pay her value equal to the figure printed on the note. Similarly, the deposits are also refundable by RBI on demand from deposit – holders. These items are claims which the general public, government or banks have on RBI and hence are considered to be the liability of RBI.

High powered money then consists of currency held by the public and reserves of the commercial banks, which include vault cash and banks’ deposits with RBI. Thus H = CU + R. 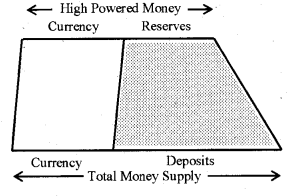 Question 5.
Rewrite statement if they are wrong. 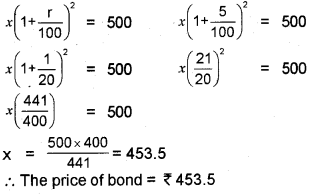 Thus everyone becomes ready to convert the speculative money balance into bonds. When rate of interest falls and reach its minimum level, everyone put whatever wealth they acquire in the form of money and the speculative demand for money is infinite. 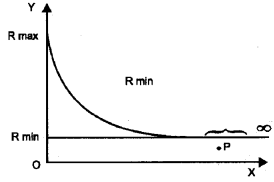 Question 9.
Distinguish between the CDR and RDR, CDR, RDR
Answer:
Currency Deposit Ratio (CDR) is the ratio of money held by the public in currency to that they hold in bank deposit.
Cdr= CU\DD

Question 1.
The central bank adjusts the monetary instruments in relations with economic situations.

1. Bank Rate:
The rate of interest payable by commercial banks to RBI if they borrow money from the latter in case of a shortage of reserves.

2. Cash Reserve Ratio (CRR):
The fraction of their deposits which the commercial banks are required to keep with RBI.

3. Statutory Liquidity Ratio (SLR):
The fraction of their total demand and time deposits in which the commercial banks are required by RBI to invest in specified liquid assets.

4. Repo rate:
The rate at which commercial banks borrow from the central bank.

5. Reverse Repo Rate:
The rate at which the central bank borrow from the commercial banks. 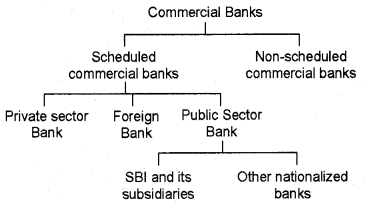 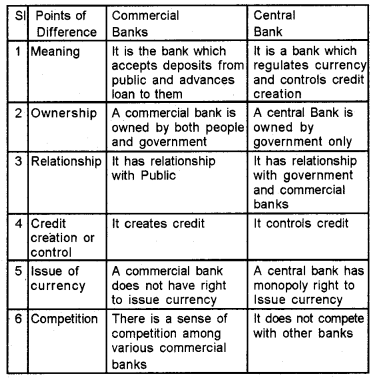 Question 5.
Anand, a 12th class student went to SBT and met the manager. He asked manager about major functions performed by the bank. What may be the answer given by the manager?
Answer:
Functions of commercial banks
A. Accepting deposits of 3 kinds

B. Giving loans and advances

Question 6.
The data is related to the money supply in India

Functions of central bank The central bank in every country performs some common functions which are pointed out below (explain them in detail).

Thus it is clear that a central bank performs various functions in order to control the economy as a whole.

Answer:
Monetary policy is the policy used to control inflation. Its three instruments are
1. Open market operation:
The RBI sells and buys government securities in the open market. This is known as open market operation. At the time of high inflation, RBI sells government securities to the public. The money from the economy flow to the RBI. Since the money in the economy falls the demand for goods and services too will fall and the price will come down. So the inflation is controlled.

2. Changes in the bank rate:
When inflation is high RBI will raise the bank rate. At higher bank rate people will demand less loans, they will save more. This will lead to a reduction in the demand, the price level too will fall. An increased bank rate also will lead to a fall in the money supply.

Question 3.
Mr. Ramu is a farmer. He has a surplus of rice which he wishes to exchange for clothing. But he may not be able to find any person who demand rice with a surplus of clothing. This is one of the problems in Barter System.

2. Standard of value:
Money acts as a conve-nient unit of account. When we purchase or sell goods, its value can be expressed in monetary terms. We express the value of goods in terms of money. Examples are : price per Kg of sugar is Rs. 30, price per meter of cloth is Rs. 25 and price per liter of milk is Rs. 20, etc.

Question 4.
a. Identify and explain the theory behind the diagram.

1. Transactions Motive:
The transactions motive relates to the demand for money or the need of cash for the current transactions of individual and business exchanges. Individuals hold cash in order to bridge the gap between the receipt of income and its expenditure. This is called the income motive.

The businessmen also need to hold ready cash in order to meet their current needs like payments for raw materials, transport, wages, etc. This is called a business motive.

Similarly, businessmen keep cash in reserve to tide over unfavorable conditions or to gain from unexpected deals.
Keynes holds that the/ransaction and precautionary motives are relatively interesting inelastic, but are highly income elastic. The amount of money held under these two motives (M1 is a function (L)) of the level of income (Y) and is expressed as M1 = L1 (Y)

Since M1= (Y) and M2= L2 (r), the total liquidity preference function is expressed as M = L (Y, r). Supply of Money : The supply of money refers to the total quantity of money in the country. Though the supply of money is a function of the rate of interest to a certain degree, yet it is considered to be fixed by the monetary authorities. Hence the supply curve of money is taken as perfectly inelastic represented by a vertical straight line.

Determination of the Rate of Interest: Like the price of any product, the rate of interest is determined at the level where the demand for money equals the supply of money. In the following figure, the vertical line QM represents the supply of money and L the total demand for money curve. Both the curve intersect at E2 where the equilibrium rate of interest OR is established. , 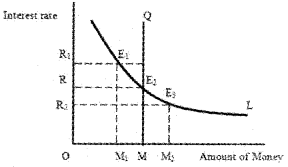 If there is any deviation from this equilibrium position an adjustment will take place through the rate of interest, and equilibrium E2will be re-established. At the point, E1the supply of money OM is greater than the demand for money OM1.

It may be noted that, if the supply of money is increased by the monetary authorities, but the liquidity preference curve L remains the same, the rate of interest will fall. If the demand for money increases and the liquidity preference curve shifts upward, given the supply of money, the rate of interest will rise.