Plus Two Economics Introduction Macroeconomics One Mark Questions and Answers

The pictures are related to the impacts of recession in 2008. Can you identify some impacts of the Great Depression of the 1930’s?
Answer:
Unemployment, Fall in Aggregate Demand, etc.

Question 4.
List out any two features of a capitalist economy.
Answer:
Private ownership of the means of production. Production takes place for selling in the market.

Question 5.
Identify the sectors of the economy from the given below sentences.

Question 6.
Some variables are given below. Classify them under two branches of economics.

Question 1.
Prepare a note on Macroeconomics.
Answer:
Macroeconomics deals with the aggregate economic variables of an economy. It also takes into account various interlinkages which may exist between the different sectors of an economy. This is what distinguishes it from microeconomics, which mostly examines the functioning of the particular sectors of the economy, assuming that the rest of the economy remains the same.

Macroeconomics emerged as a separate subject in the 1930s due to Keynes. The Great Depression, which dealt a blow to the economies of developed countries, had provided Keynes with the inspiration for his writings. In this book, we shall mostly deal with the working of a capitalist economy.

Hence it may not be entirely able to capture the functioning of a developing country. Macroeconomics sees an economy as a combination of four sectors, namely households, firms, government and external sector.

Question 2.
Choose the appropriate answer
a. The Greek word‘macros’ means

b. Partial equilibrium analysis is the methodology of

Question 5.
Below is given a few features of a phenomenon.

Question 1.
Fill in the blanks.

Question 2.
Find the odd one out. Justify your answer. 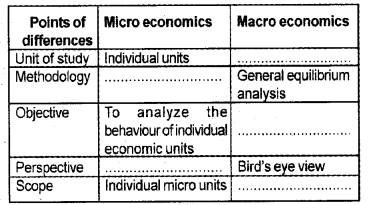 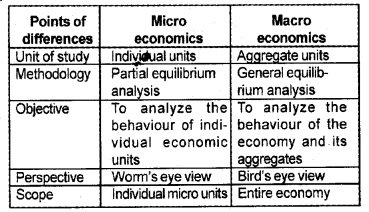 3. Economic planning:
The main objective of economic planning is to implement various police and programmes for the welfare of the people on priority basis. Macroeconomic helps economists to examine the interrelationship between various macroeconomic variables and choose the programmes best suited for the welfare of the people.