Question 1.
What is the co-ordination number of particles present in FCC crystal structure?
Answer:
12

Question 2.
Identify the order of reaction if the unit of rate constant is mol L-1s-1.
Answer:
Zero order

Question 3.
What is the structure of chromate ion ((CrO4)2-)?
Answer:
Tetrahedral
OR

Question 6.
What is the crosslinked polymer obtained by the polymerisation of phenol and formaldehyde?
Answer:
Bakelite

Question 7.
……….. is an artificial sweetener which is unstable at cooking temperature.
Answer:
Aspartame

Question 8.
a) Based on the nature of intermolecular forces, classify the following solids:
i) SiO2
ii) Ice
b) ZnO turns yellow on heating. Why?
Answer:
a) i) SiO2 – Covalent/Network solid
ii) Ice – Molecular slod/Hydrogen bonded molecular solid.

b) This is due to metal excess defect caused by the presence of extra cations at interstitial sites. ZnO is white in colour at room temperature. On heating it loses oxygen as, 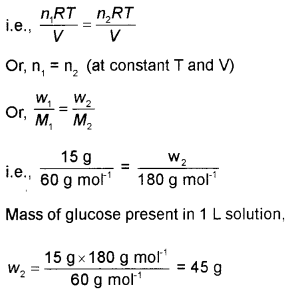 Question 12.
Explain how the complexes of nickel, [Ni(CN)4]2 and [Ni(CO)4] have different structures, but do not differ in their magnetic behaviour. (Ni, Atomic No: 28)
Answer:
In [Ni(CN)4]2-, Ni (3d8 4s2) is in +2 oxidation state (Ni2+ – 3d8) and it undergoes dsp2 hybridisation. So the ion has square planar geometry. But in [Ni(CO)4], Ni is in 0 oxidation state and it undergoes sp3 hybridisation. So it has tetrahedral geometry. Due to the absence of unpaired electrons both the complexes are diamagnetic.

Question 14.
During the β-elimination reaction of 2-bromopentane in an alcoholic solution of KOH results Pent-2-ene as major product and Pent-1-ene as minor product. State the rule to explain the reaction.
Answer:
Zaitsev rule/Saytzeff rule. The rule states that “in dehydrohalogenation reactions, if there is a possibility of formation of more than one alkene, the preferred product is that alkene which has the greater number of alkyl groups attached to the doubly bonded carbon atoms.”

Question 16.
Briefly describe Gatterman Koch reaction.
Answer:
Gatterman – Koch reaction: When benzene or its derivative is treated with carbon monoxide and hydrogen chloride in the presence of anhydrous aluminium chloride or cuprous chloride, it gives benzaldehyde or substituted benzaldehyde.

Question 17.
How can it convert methyl iodide to ethanamine?
Answer:
Methyl iodide when treated with KCN or NaCN gives methyl cyanide or ethane nitrile which on reduction with LiAlH4 or H2 in presence of Ni/Pt/Pd or by sodium amalgam and ethanol we get ethanamine.

Question 20.
a) What are drugs?
b) Write an example for a drug classified based on its chemical structure.
Answer:
a) Drugs are chemicals of low molecular mass (~ 100 – 500u) which interact with macro molecular targets and produce a biological response.
b) Sulphonamides or Sulpha drugs like arsphenamine/salvarsan, prontosil, sulphapyridine.

Question 23.
For hydrolysis of methyl acetate in aqueous solution, the following results were observed.

The rate constant for a pseudo first order reaction, 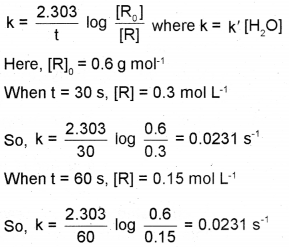 From the above results it can be seen that k = k’ [H2O] is a constant and hence, it is a pseudo first order reaction.

Question 24.
a) State Hardy-Schulze rule with the help of example.
b) Why lyophilic colloids are used as protective colloids?
Answer:
a) The Hardy-Schulze rule states that the greater the valence of the flocculating ion added, the greater is its power to cause precipitation.
For example, in the coagulation of a negative sol like AS2S3, the flocculating power is in the order: Al3+ > Ba2+ > Na+
Or, in the coagulation of a positive sol like Fe2O3.xH2O, the flocculating power is in the order:
[Fe(CN)6]4- > PO43- > SO42- > Cl–

Question 27.
Assign the possible reason for following:
a) Stability of +5 oxidation state decreases and that of +3 oxidation state increases down to 15th group elements.
b) H2O is less acidic than H2S.
c) H3PO2 act as a good reducing agent while H3PO4 does not.
Answer:
a) It is due to inert pair effect. In the case of heavier elements the lowest oxidation states are more prodominent due to non-participation of the s-electrons in the formation of bonds. 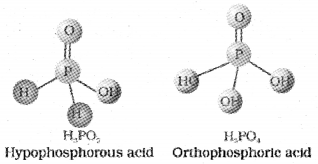 Question 28.
Give reasons for the following:
a) Transition metals and many of their compounds act as catalyst.
b) Scandium (Z = 21) does not exhibit variable oxidation state and yet it is regarded as a transition element.
c) Write the step involved in the preparation of Na2CrO4 from chromite ore.
Answer:
a) Transition metals and their compounds are known for their catalytic activity. This is due to their ability to adopt multiple oxidation states and to form complexes. Thus they can form with lower activation energy for the reaction. Also because the transition metal ions can change their oxidation states, they become more effective as catalysts.

In some cases transition metals provide a suitable surface for the reaction to take place. The reactants are adsorbed on the surface of the catalyst where reaction occurs. This has the effect of increasing the concentration of the reactants at the catalyst surface and also weakening of the bonds in the reacting molecules.

b) Scandium is regarded as a transition element because it has incompletely filled 3d orbitals in the ground state of the atom (3d1 4s2).

Question 29.
How would you account for the following:
a) Aldehydes are more reactive than ketones towards nucleophilic addition reaction.
b) Boiling point of aldehydes are lower than alcohols.
c) Addition reaction of sodium hydrogen sulphite is useful for separation and purification of aldehydes.
Answer:
a) This is due to steric and electronic reasons.
Sterically, the presence of two relatively large substituents in ketones hinders the approach of nucleophile to carbonyl carbon that in aldehydes having only one such substituent.

Electronically, the two alkyl groups reduce the electrophilicity of the carbonyl carbon more effectively in ketones than in aldehydes.

c) The hydrogen sulphite addition compound is water soluble and can be converted back to the original aldehyde by treating it with dilute mineral acid or alkali. Therefore, these are useful for separation and purification of aldehydes.

Question 30.
a) What are primary batteries?
b) The cell potential of a mercury cell is 1.35 V, and remain constant during its life. Give reason.
c) Write the equation of the reactions involved at each electrode in a H2-O2 fuel cell.
Answer:
a) Batteries in which the reaction occurs only once and after use over a period of time they become dead and cannot be reused again.
b) This is because the overall reaction does not involve any ion in solution whose concentration can change during its life time.
c) Anode reaction: 2H2(g) + 4OH– (aq) → 4H2O(l) + 4e–
Cathode reaction: O2(g) + 2H2O(l) + 4e– → 4OH– (aq)

Question 31.
a) Draw the structures of geometrical isomers of [Fe(NH3)2(CN)4]–
b) Write the formula of pentaammine carbonate cobalt (III) chloride.
c) Wife any two limitations of valance bond theory.
Answer:
a)

Question 32.
a) Grignard reagents are important class of organometallic compounds used to prepare alcohols. Identify the compounds A and B and write the formula.

b) Write the name of products formed when salicylic acid is treated with acetic anhydride in acid medium
Answer:
a) i) Compound A : Ethanol/Ethyl alcohol – CH3CH2OH
ii) Compound B : Ethanal/Acetaldehyde – CH3CHO
b) Acetylsalicylic acid/Aspirin and Acetic acid/Ethanoic acid

b) Lucas reagent is a mixture of conc. HCl and anhydrous ZnCl2.