Question 3.
a. Represent the galvanic cell based on the cell reaction given below:

Question 6.
Leaching is a process of concentration of ores. Explain the leaching of alumina from bauxite.

Question 7.
Nitrogen forms a number of oxides and oxoacids.
a. Which of the following is a neutral oxide of nitrogen?
i. N2O
ii. N2O5
iii. NO2
iv.N2O4
b. Prepare a short write-up on Nitric acid highlighting its laboratory preparation, chemical properties and uses.
OR
Phosphorous forms a number of compounds, a. The gas liberated when calcium phosphide is treated with dil.HC/ is
i. Cl2
ii.H2
iii. PH3
iv. All of the above
b. Prepare a short write up on PCl3 and PCl5 highlighting the preparation and chemical properties of PCl3 and structure of PCl5

Question 8.
a. Transition elements are d block elements.
i. Write any four characteristic properties of transition elements.
ii Cr2+ and Mn3+ have d4 configuration. But Cr2+ is reducing and Mn3 is oxidizing. Why?
b. Which of the following is not a lanthanoid element?
i. Cerium
ii. Europium
iii Lutetium
iv. Thorium

Question 10.
a. An ambident nucleophile is
i. Ammonia
ii Ammonium ion
iii Chloride ion
iv. Nitrite ion
b.Haloalkanes and Haloarenes are organohalogen compounds.
i. Suggest a method for the preparation of alkyl chloride.
ii. Aryl halides are less reactive towards Nucleophilic substitution reactions. Give reasons.

Question 11.
a. Arrange the following compounds in the order of increasing boiling points: Ethanol, Propan1 o 1, Butan1 o 1, Butan2ol
b. In the lab, students were asked to carry out the reaction between phenol and cone. HN03. But one student, ‘A’ carried out the reaction between phenol and dil. HNO3 Do you think that the student ‘A’ got the same result as others. Substantiate with suitable explanations. [Also write the chemical equations wherever necessary]

Question 12.
a. The product obtained when benzene is treated with carbon monoxide and hydrogen chloride in presence of anhydrous AlCl3 is
i. Chlorobenzene
ii. Phenol
iii. Benzaldehyde
iv. Benzoic acid
b. How will you carry out the following conversions? 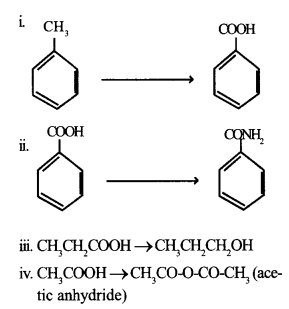 Question 13.
a. Classify the following amines as primary, secondary and tertiary 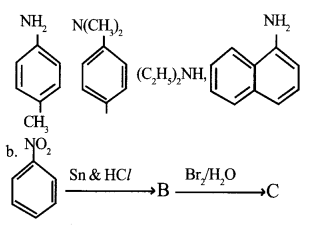 Identify products B and C and write their formulae.

Question 14.
a. Which of the following is a polysaccharide?
i. Maltose
ii. Sucrose
iii. Fructose
iv. Cellulose
b. Explain the amphoteric behavior of amino acids.

Question 15.
a. Which of the following is not applicable to Nylon 6, 6?
i. Synthetic polymer
ii. Fiber
iii. Addition polymer
iv. Condensation polymer.
b. Differentiate between thermoplastics and thermosetting plastics. Write one example for each.

Question 16.
‘Antibiotics, antiseptics, and disinfectants are antimicrobial drugs.
Explain any one of the above-mentioned drugs with examples.