Biomolecules – orgainic compounds which build up living organisms and are required for their growth and maintenance.

1. Classification of carbohydrates:
(i) Mono sacharides:
Carbohydrates that cannot be hydrolysed further to give simple units of polyhydroxy aldehydes or ketones.e.g. glucose, fructose, ribose.

(ii) Oligosacharides:
Carbohydrates that yield 2 to 10 monosacharide units on hydrolysis. Depending upon the number of monsacharides they are further classified into disaccharides, trisaccharides, etc. e.g. Sucrose, maltose.

Non-reducing sugars-disacchrides in which the reducing group of monosaccharides are bonded, e.g. Sucrose.

Glucose:
Preparation:
(1) From sucrose (Cane sugar):
If sucrose is boiled with dilute HCl or H2SO4 in alcoholic solution, glucose and fructose are obtained in equal amounts.

(2) From starch (commercial preparation) – by hydrolysis of starch by boiling it with dilute H2SO4 at 393 K underpressure.

Structure:
Glucose is an aldohexose and is also known as dextrose.
(1) On prolonged heating with Hl, it forms n-hexane this indicates that all the 6 C atoms are in a straight chain.

(2) Glucose reacts with hydroxylamineto form an oxime and adds a molecule of HCN to give cyanohydrin. These reactions confirm the presence of a CO group.

(3) Glucose get oxidised to gluconic acid, on reaction with Br2 water. This indicates presence of -CHO group.

(4) Acetylation of glucose with acetic anhydride gives glucose pentaacetate which confirms the presence of 5 -OH groups, in different C atoms since glucose is stable.

(5) On oxidation with HNO3, glucose as well as gluconic acid both yield a dicarboxylic acid saccharic acid. This indicates the presence of a primary -OH in glucose. 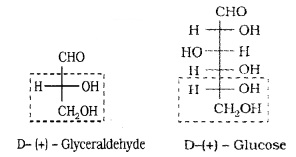 2. Cyclic Structure of Glucose:
Reactions and facts that could not be explained by the open chain structure of glucose:

To explain this behaviourthe following six membered cyclic structure (Hemiacetal structure) has been proposed. In this the -OH group at C-5 is involved in ring formation.

The two cyclic hemiacetal forms of glucose differ only in the configuration of the -OH group at C1, called anomeric carbon. Such isomers, α-form and β-forms are called anomers. The six membered cyclic structure of glucose is called pyranose structure (Haworth structure).

3. Structure of Fructose:
The open chain structure of fructose can be represented as

Fructose also exists in two cyclic forms which are obtained by the addition of -OH at C5 to the keto group.

The cyclic structures of two anomers of fructose are represented by Haworth structure.

Disaccharides:
In disaccharides, the monosaccharides are joined together by glycosidic linkage.

(i) Sucrose:
This on hydrolysis gives an equimolar mixture of D-(+)-glucose and D-(-)-fructose. The two monosaccharides are held together by a glycosidic linkage between C1 of α-glucose and C2 of β-fructose.

Since the reducing groups of glucose and fructose are involved in glycosidic bond formation sucrose is a non-reducing sugar.

Thus, hydrolysis of sucrose brings about a change in the sign of rotation from dextro to laevo and the product is named as invert sugar and the process is termed as an inversion of sugar.

(ii) Maltose:
Disaccharide, composed of α -D-glucose. The glycosidic linkage is between C1 of one glucose and C4 of another glucose. The free aldehydic group can be produced at C1 of second glucose in solution. Hence, maltose is a reducing sugar.

(iii) Lactose:
It is commonly known as milk sugar. It is composed of β-D-galatose and β-D-glucose, The glycosidic linkage is between C1 of galatose and C4 of glucose. It is also a reducing sugar.

4. Polysacharides:
They contain a large number of monosaccharide units joined together by glycosidic linkage.

(1) Starch:
Main storage polysaccharide of plants. It is a polymer of α -Glucose and consist of two components.

(iii) Cellulose:
Occurs in plants, the most abundant organic substance in plant kingdom, a straight chain polysaccharide composed only of β-D-glucose units joined by glycosidic linkage between C1 of one glucose unit and C4 of the next glucose unit.

(iv) Glycogen:
The carbohydrates are stored in animal body as glycogen. It is also known as animal starch because its structure is similar to amylopectin. It is present in liver, muscles and brain.

5. Importance of Carbohydrates:
Essential for life in both plants and animals, honey is instant source of energy, cell wall of bacteria and plants is made up of cellulose, from cellulose we make furniture and cotton fibre, they provide raw material for many important industries like textiles, paper, lacquers, and breweries.

Proteins
(In Greek ‘proteios’ means primary or of prime importance). Chief sources of proteins-milk, pulses, fish, meat etc. They are also required for growth and maintenance of body. All proteins are polymers of a-amino acids.

The hydrolysis of protein gives only a-amino acids. All amino acids have trivial names. Amino acids are generally represented by a three-letter symbol, e.g. Glycene – Gly, Alanine – Ala.

2. Classification of Amino Acids:
Amino acids are classified as acidic, basic or neutral depending upon the relative number of amino and carboxyl groups in their molecules.

Properties:
Colourless, crystalline, water soluble, high melting solids and behave like salts. In aqueous solution, the -COOH group can lose a proton and – NH2 group can accept a proton, giving rise to a dipolar ion known as zwitterion. 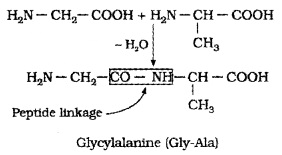 Classification of Proteins:
(a) Fibrous Proteins:
When the polypeptide chains run parallel and are held together by hydrogen and disulphide bonds, then fibre-like structure is formed. They are insoluble in water, e.g. Keratin (present in nail, wood, silk), Myosin (present in muscles).

(b) Globular Proteins:
The chains of polypeptide coil around to give a spherical shape. They are soluble in water, e.g. Insulin, egg albumins.

(i) Primary Structure of Proteins:
It refers to the sequence of amino acids in a polypeptide chain.

(ii) Secondary Structure of proteins:
It refers to the shape in which a long polypeptide chain can exist. They are found to exist in two different types of structures.
α -helix and β-pleated sheet structure.

In β-Helix a polypeptide chain forms all possible hydrogen bonds by twisting into a right handed screw (helix) with the -NH2 group of each amino acid residue hydrogen bonded to the C = O of an adjacent turn of the helix.

In β -structure all peptide chains are stretched out to nearly maxium extension and then laid side by side which are held together by intermolecular H-bonds. The structure resembles the pleated folds of drapery.

(iii) Tertiary structure of proteins:
It represents overall folding of the polypeptide chains. It gives rise to two major molecular shapes such as fibrous and globular.

(iv) Quaternary structure of proteins:
It refers to the spatial arrangement of the subunits (polypeptide chains) with respect to each other.

Enzymes
They are biological catalysts. Almost all enzymes are globular proteins. They are very specific for a particular reaction and for a particular substrate. The ending of the name of an enzyme is -ase. They are generally named after the compound or class of compounds upon which they work.

e.g. Maltase (catalyses hydrolysis of maltose into glucose). They are also named after the reaction, where they are used. e.g. Oxidoreductase-enzymes which catalyse the oxidation of one substrate with simultaneous reduction of another substrate.

Vitamins
Organic compounds required in the diet in small amounts to perform specific biological functions for normal maintenance of optimum growth and health of the organism. Vitamins are designated by alphabets A, B, C, D, etc.

1. Classification of Vitamins:
(i) Fat Soluble Vitamins:
Vitamins soluble in fat and oils but insoluble in water, e.g. Vitamins A, D, E, and K. They are stored in liver and adipose tissues.

(ii) Water Soluble Vitamins:
vitamins soluble in water, e.g. B group vitamins and vitamin C. These must be supplied regularly in diet because they are readily excreted in urine and cannot be stored in body (except vitamin B12).
Some Important vitamins and Deficiency Diseases 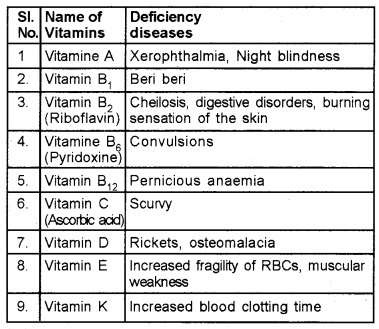 Nucleic Acids
The particles in nucleus of the cell, responsible for heredity, are chromosomes, which are made up of proteins and another type of biomolecules called nucleic acids. These are mainly of two types: DNA (Deoxyribo Nucleic Acid) and RNA (Ribo Nucleic Acid).

1. Chemical Composition of Nucleic Acids:
Complete hydrolysis of DNA (or RNA) yields a pentose sugar, phosphoric acid and nitrogen containing heterocyclic compounds (called bases). In DNA molecules, the sugar is β -D-2-deoxyribose where as in RNA molecule it is β-D-ribose.

DNA contains 4 bases – adenine (A), guanine (G), cytosine(C) and thymine (T). RNA contains the first three bases and Uracil (U) instead of thymine(T).

Nucleotides are joined together by phosphodiester linkage between 5′ and 3′ carbon atoms of the pentose sugar.

James Watson and Francis Crick gave a double strand helix structure for DNA. Two nucleic acid chains are wound about each other and held together by hydrogen bonds between pairs of bases.

The two strands are compementary to each other because the H-bonds are formed between specific pairs of bases. Adenine forms H- bond with thymine (-A=T-) whereas cytosine forms H-bonds with guanine (- c = G-).

3. Biological Functions of Nucleic Acids:
DNA- chemical basis of heredity, regarded as the reserve of genetic information, exclusively responsible for maintaining the identity of different species of organisms, capable of self duplication during cell division and identical DNA strands are transferred to daughter cells. Another important function of nucleic acids is the protein synthesis in the cell.

Supplementary Material
Hormones:
Molecules that act as intercellular messengers .produced by endocrine glands in the body and are poured directly in the blood stream which transports them to the site of action. Chemically, they belong to different classes of compounds such as steriods (e.g., estrogens and antrogens), polypeptides (e.g., insulin, endorphins) and amino acid derivatives (e.g., epinephrine, norepinephrine).

Functions of Hormones: Helps to maintain the balance of biological activities in the body. e.g.

Thyroxine:
Produced in thyroid gland. It is an iodinated derivative of amino acid tyrosine. Abnormally low level of thyroxine leads to hypothyroidism, characterised by lethargyness and obesity.

Increased level of thyroxine causes hyperthyroidism and enlargement of the thyroid gland. This condition can be controlled by adding Nal to commercial table salt (“Iodised” salt).

Hormones released by adrenal cortex play very important role in the functions of the body. e.g.

Addison’s disease:
Caused by the malfunctioning of adrenal cortex. It is characterised by . hypoglycemia, weakness and increased susceptibility to stress. It is a fatal disease unless treated by glucocorticoids and mineralocorticoids.

Sex hormones: Released by gonads (testes in males and ovaries in females). These are responsible for the development of secondary sex characters, eg.