Classification
1. Mono, Di, Tri or Polyhydric Compounds:
Alcohols and phenols are classified as mono-di-tri-polyhydric depending upon number of -OH group. 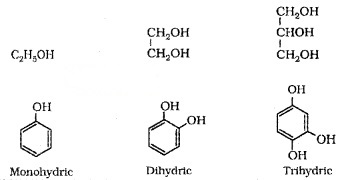 Allylic Alcohols:
The -OH group is attached to a sp3 C next to the C = C.

Benzylic Alcohols:
The -OH group is attached to a sp3 C next to an aromatic ring. 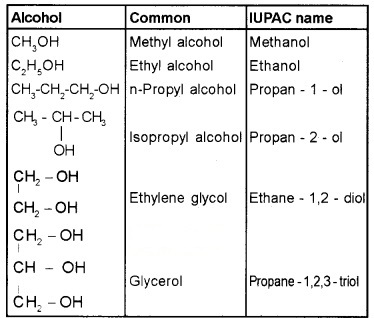 (b) Phenols:
These are hydroxy derivative of benzene. The name phenol is also accepted by IUPAC.

Structure of Functional Group
Alcohols:
C of C – OH bond is sp3 hybridised. Bond is formed by sp3 – sp3 overlap. C – OH bond angle slightly less than the tetrahedral bond angle(109°28’) due to the repulsion between the unshared electron pairs of oxygen.

Phenols:
The -OH group is attached to sp2 C of an aromatic ring. The C – O bond length is slightly less than that in methanol. This is due to

Ethers:
The 4 electron pairs (2 bond pairs and 2 lone pairs) on O are arranged approximately in a tetrahedral arrangement. The bond angle is slightly greaterthan the tetrahedral angle due to the repulsive interaction between the two bulky -R groups.

Alcohols and Phenols
1. Preparation of Alcohols
(1) From alkenes:
(i) By acid catalysed hydration:
Alkenes react with water in presence of acid as catalyst. The addition is according to Markovnikov’s rule.

(ii) By hydroboration – oxidation:
Diborane – B2H6 or (BH3)2 reacts with alkene to given trialkyl borane which is oxidised to alcohol by H2O2 in presence of aq. NaOH.

(2) From Carbonyl Compounds:
(i) By Reduction of Aldehydes and Ketones:
These are reduced using LiAlH4, NaBH4, H2Pd etc.
Aldehyde gives 1° alcohols, while ketones gives 2° alcohols.

(ii) By the Reduction of Carboxylic Acids or Esters:

(3) From Griguard Reagents:
By the reaction of Grignard reagents with aldehydes and ketones. The adduct formed by the nucleophilic addition of RMgX to carbonyl group on hydrolysis yeilds alcohol.

2. Preparation of Phenols:
(a) From Hatoarenes:

(b) From Benzene Sulphonic Acid:

Solubility:
Solubility of alcohols and phenols in water is due to their ability to form hydrogen bonding. The solubility decreases with increase in size alkyl/aryl group.

4. Chemical Reactions of Alcohols:
(a) Reactions Involving Cleavage of O-H Bond
(1) Acidity of Alcohol and Phenols:
(i) Reaction with Metals:
Alcohols and phenols react with active metals such as Na, K and Al to yield corresponding alkoxides/phenoxides and H2.

(ii) Acidity of Alcohols:
It is due to the polar nature of O-H bond. Electron releasing groups increase electron density on O tending to decrease the polarity of O-H bond. The acid strength of alcohols decreases in the order: 1°> 2° > 3° alcohols.

(iii) Acidity of Phenols:
The reaction of phenol with aqueous NaOH indicates that phenols are stronger acids than alcohols and water. Acidity of phenols can be explained by resonance.

The delocalisation of negative charge makes phenoxide ion more stable and favours the ionisation of phenol.

The acidity of phenols increases if an electron-withdrawing group is present at 0- and p- position. Electron releasing groups decrease the acidity.

e.g. ethanol undergoes dehydration by heating it with cone. H2SO4 at 443 K.

(4) Oxidation:
It i nvolves the formation of a

1° alcohols are oxidised to aldehydes.

Strong oxidising agents such as acidified KMnO4 or K2Cr2O7 are used forgetting carboxylic acids from alcohols directly. A better reagent for oxidation of 1° alcohol to aldehydes is pyridinium chlorochromate (PCC).

2° alcohols are oxidised to ketones by CrO3.

3° alcohols do not undergo oxidation.

Dehydrogenation:
When the vapours of a alcohols are passed over heated Cu at 573 K,
1° alcohols give addehyde.

3° alcohols undergo dehydration to give alkene.

(c) Reactions of Phenols:
(1) Electrophilic Aromatic Substitution:
The -OH group attached to the benzene ring activates it towards electrophilic substitution. It is 0- and p- directing.
(i) Nitration: 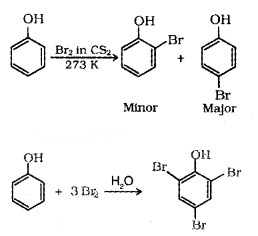 Some Commercially Important Alcohols
(1) Methanol (CH3 – OH):
It is also known as wood spirit. Industrial preparation – Catalytic hydrogenation of carbon monoxide at high pressure and temperature and in the presence of ZnO-Cr2O3 catalyst.

Methanol is a colourless liquid, poisonous in nature, cause blindness and in large quantities causes even death. It is used as solvent in paints and varnishes.

(2) Ethanol (C3 – CH2 – OH):
Obtained commercially by fermentation of sugars. The enzyme invertase present in the yeast converts sugar into glucose and fructose, which undergo fermentation in presence of zymase, another enzyme found in yeast.

It is a colourless liquid, used in paint industry as a solvent.
Rectified spirit – 95.6% ethanol.
Absolute alcohol – Pure anhydrous alcohol (100% alcohol)
Power alcohol – Alcohol mixed with gasoline (1:4 ratio).
Denatured spirit- The commercial alcohol is made unfit for drinking by mixing in it some CuSO4, pyridine or methanol. It is known as denaturation of alcohol.

Phenols are also converted to ethers by this method.

2. Physical Properties:
Ethers have much lower boiling points than alcohols. It is due to the presence of H-bonding in alcohols. Lower members of ethers are soluble/miscible in water as they form hydrogen bonds with a water molecules.

Order of reactivity of hydrogen halides is Hl > HBr > HCI. In the reaction of ether with HI, if the ether contains primary or secondary alkyl groups, it is the lower alkyl group that forms alkyl iodide.

(2) Electrophilic Substitution:
It occurs at o- and p- position as the -OR group is o- and p- directing.
(i) Hologenation: