Question 2.
When pollen is transferred from another of a flower to stigma of the another flower of the of the same plant, it is referred to as
(a) allogamy
(b) xenogamy
(c) geitonogamy
(d) autogamy
Answer:
(c) geitonogamy

Question 3.
For plant breeding purposes: Pollens are stored at -196°C. What is the purpose behind it?
Answer:
Stored pollens can be used as pollen banks in crop breeding programmes.

Question 6.
The source of food for developing embryo is
(a) Nucellus
(b) Ovule
(c) Endosperm
(d) Anther
Answer:
(c) Endosperm

Question 15.
Choose the correct answer. The layer of microsporangium that nourishes the developing pollen grains is
(a) Endothecium
(b) Tapetum
(c) Middle layer
(d) Epidermis
Answer:
(b) Tapetum

Question 1.
Pollen grains are well preserved as fossil for many years due to some characteristics

Question 2.
One time fertilization is the characteristic feature of majority of plants but angiosperm show two times of fertilization

Question 3.
Commelina, viola, and oxalis that carries both chasmogamous and Cliestogamy flowers.

2. Papaya is dioecios plants, because, the male and female flowers are present on different plants, which prevent autogamy and geitonogamy.

Question 5.
Wind pollination is common in grasses and water pollination in vallisneria. Give the features of these plants to facilitate pollination.
Answer:
1. Grasses

Question 6.
In most plants continuous self-pollination leads to inbreeding depression while in others certain devices help to discourage self pollination. Give any four devices.
Answer:

Question 7.
The micropyle remains as a small pore in the seed coat. What is its role?
Answer:
Micropyle facilitates the entry of oxygen and water into the seed during germination.

Question 8.
Draw the diagram of a typical dicot embryo and label the parts like plumule, cotyledons, radicle, and root cap.
Answer: 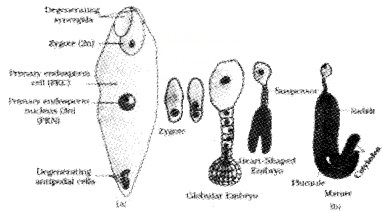 Question 9.
Observe the developmental stages given below and answer the following.

Question 10.
Apomictic seeds are important in agriculture. Do you agree? Give reason.
Answer:
Yes. These seeds are formed without fertilisation hence there is no genetic variation .This feature is helpful to preserve the desirable characters for many years.

Question 13.
Banana is a true fruit and also a parthenocarpic fruit. Justify.
Answer:
Since banana fruit is formed from ovary it is true fruit. It is parthenocarpic because the ovary develops into fruit without fertilization.

Question 15.
Some peoples live in area are subjected to allergic disease due to pollen grains.

Question 16.
Typical angiosperm embryo sac is 7 celled and 8 nucleate. This condition occurs due to the development of megaspore mother cell

Question 18.
Some pollen grains cannot germinate on stigmatic surface due to the loss of viability

Question 20.
Pollengrains of many plants are found to be allergic.

Answer:
1. Pollen grains are rich in nutrients. In recent years pollen tablets are used as food supplements. It is used in western countries in the form of syrup and tablets. Pollen consumption has been claimed to increase the performance of athletes and race horses.

Question 21.
Zygote development leads to the formation of embryo.

Question 22.
Suppose you are given four flowers namely maize, vallisneria, sunflower, and zostera.

Question 23.
A close relationship exist between a species of moth and the plant Yucca, where both species moth and Yucca cannot complete their life cycles without each other. Justify it.
Answer:
The moth deposits its eggs in the locule of the ovary of the Yucca flower. Flower in turn gets cross pollinated by the moth. The larvae of the moth come out of the eggs as the seeds starts developing.

Question 24.
Coconut and groundnut are oil yielding crops, point out the difference in the structure of seed.
Answer:
Coconut is an endospermous seed. Reserve food materials like fat, oil, etc. are stored in endosperm, in which the prominent part is endosperm and small sized embryo is situated at one end of the endosperm.

Question 25.
Seeds are formed in angiosperms when male and female gametes get fused. But in some plants seeds are produced without the fusion of gametes.

2. Apomixis is a form of asexual reproduction which mimics sexual reproduction. Seeds are produced from a diploid egg cell without reduction division and fertilization. Nucellar tissue surrounding the embryosac develops into an embryo.

Question 29.
Pollination is aided by biotic and abiotic agents. Identify the type of pollination in Vallisneria, coconut, and grass.
Answer:

Question 31.
Why do you think the zygote is dormant for some time in a fertilized ovule?
Answer:
This is because the embryo develops only after the formation of endosperm. So the zygote wait for endosperm formation which supplies food material for developing embryo.

Question 32.
In some plants self-pollination is prevented by genetic mechanism of either pollen or pistil

Question 33.
If one can induce parthenicarpy through the application of growth substances, which fruits would you select to induce parthenocarpy and why?
Answer:
Watermelon, Orange and lemon because in these fruits the seeds are scattered within their edible parts and if seed are removed they become more valuable.

Question 35.
If you squeeze seed of orange you might observe many embryos of different sizes? How is it possible?
Answer:
In orange, nucellar cells surrounding embryosac start dividing, protrude into embryosac and form many embryos.

Question 37.
Observe the flow chart given below. Fill in the blank 1 and 2. Write the relevance of the process indicated as 1.

Question 38.
Apple and mango are fruits. But they are formed in different ways. How are they formed?
Answer:
Apple is called a false fruit because the thalamus develops into fruit. Here ovary is not involved. Mango is a fruit because it is formed from ovary

Question 39.
The synergids have special cellular thickening. Name the thickening and write its function.
Answer:
Filiform apparatus
It guides the pollen tube into the synergid

Question 40.
Analyse the table and fill in the blank. 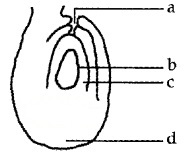 Question 43.
Self-incompatibility and dioecious condition are two devices for discouraging self-pollination in plants. Explain the two.
Answer:
Self-incompatibility – In this, pollen fail to germinate on stigma/pistil of the same flower. This is due genetic mechanism of either male parent or female parent. Dioecious condition – It is the occurrence of Male and female flowers on different plants.

Question 44.
Peculiarities of certain parts of the ovule are given below. Name the parts.

Question 45.
Geitonogamy and xenogamy are two types of pollination. Differentiate between the two.
Answer:
1. Geitonogamy
It is the transfer of pollen grains from the anther to the stigma of another flower of the same plant.

2. Xenogamy
It is the transfer of pollen grains from anther to the stigma of a different plant.

Question 46.
The inner most wall layer of microsporangium is tapetum. It is multinucleate. Justify this statement.
Answer:
Out of four wall layers of anther, tapetum is the innermost layer that nourishes the developing pollen grains.

Question 49.
Occurrence of more than one embryo in a seed is called polyembryony.

Question 52.
Geitonogamy is similar to autogamy. Justify this statement.
Answer:
In geitonogamy pollen grains come from the same plant. Both Autogamy and geitonogamy are come under self pollination.

Question 54.
Observe the relationship between the first two terms and fill in the blanks.

Question 1.
Pollen grains in angiosperms ace not motile. They have to be carried to the stigma by external agents.

Answer:
1. Transfer of pollen grains from the anther to the stigma is called pollination.

Question 2.
Ramu while observing the C.S. of anther of Datura through a microscope, found fourwall layers.

Question 3.
In flowering plants microspores are formed by meiosis and are haploid tetrads

Answer:
1. In the anther each cell of sporogenous tissue act as microspore mother cells (2n) which undergoes meiosis and forms four microspores (n) which are arranged in a cluster of four cells, ie.

microspore tetrad. When the anther matures the microspore dissociates from each other and develop into pollen grains. The pollen grains represents male gametophyte.

2. The nucellus of the ovule one cell is enlarged and act as megaspore mother cell (2n) which undergoes meiosis and results four megaspores (n) one of the megaspore is functional while the other three degenerates.

Only the functional megaspore develop into the embryo sac. Thus embryo sac formation from a single megaspore is called ‘monosporic’.

Question 5.
Diagrammatic representation of mature embryo sac is given. 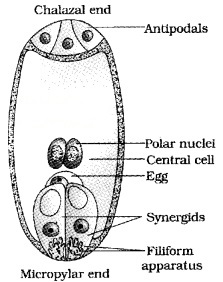 3. Filiform apparatus – guides the pollen tubes into the synergids at the time of pollen germination prior to fertilization.

Question 6.
Double fertilization is the characteristic feature of angiosperms.

Answer:1. It is the fertilization takes place two times.
2.

Question 7.
Haploidy, diploidy, and tripoloidy are the ploidy level of angiosperm plant parts from a seed is given below.

1. Find out the chromosome status of each part.

2. How will you give explanation to reduction of chromosome number from diploid to haploid?

Answer:
1. chromosome status of each part:

2. Chromosome number reduced due to reduction division or meiosis.

Question 8.
A bisexual self pollinating flowering plant has chromosome number 76, in its somatic cells.

2. Sexual reproduction brings about genetic recombination and results in the better Survival of the species.

3. The flowers are small and inconspicuous .they are formed in clusters. Lightweight Pollens are produced in large amount. Stigma is long and hairy.

Question 9.
Tender coconut has liquid endosperm inside it. But matured it has only solid endosperm

Question 12.
Pollen grains in angiosperms are not motile. They have to be carried to the stigma by external agents.

Question 13.
Flowering plants have major devices to discourage self pollination and to increase cross pollination. Point out any four devices.
Answer:
1. Pollen release and stigma receptivity are not synchronised, ie. either the pollen is released before stigma become receptive or stigma becomes receptive much before the release of pollen.

2. In some plants the anther and stigma are placed at different positions so that pollen cannot come in contact with the stigma of the same flower.

3. Self pollination is prevented by self-incompatibility which is a genetic mechanism that prevents the pollen of the same flower or flowers of the same plant from fertilizing the ovules.

Question 14.
Maize consists of nectar less flowers but in or chids flowers are nectary and attractive.

Answer:
1. Maize is a wind pollinated plant. The flowers produce large amount of light and non sticky pollen grains which helps in transportation through wind.

They possess well exposed stamens and large and feathery stigma to easily capture pollen grains. There is a single ovule in an ovary and arranged in compact inflorescence.

Orchid is an insect pollinated plant. It produce large conspicuous flowers, the small flowers are produced in clusters.

The large flowers are colourful, fragrant and rich in nectar. The insects are attracted by colour and fragrance and are often rewarded by nectar and pollen produced by the flower.

Question 15.
Wind is an abiotic agent that helps in pollination. Write any six features of wind pollinated flowers.
Answer:

Question 16.
Observe the figure given below and explain its structure.

Answer:
It is the structure of pollen grain, it has an outer hard layer called exine that possess prominent apertures called germ pores through which pollen tube come out.

Question 17.
Observe the diagram given below.

a) Copy the diagram, and label antipodals and synergids.
b) Explain double fertilization.
Answer:
1. 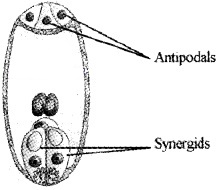 2. At first, one of the male gametes fuses with egg cell to form a diploid zygote. This is called syngamy. The other male gamete fuses with the polar nuclei to form primary endosperm nucleus (PEN). This is called triple fusion. Thus, two types of fusion occur in the embryo sac called Double fertilization.

Question 1.
Differences between microsporogenesis and megasporogenesis. Which type of cell division occurs during this events? Name the structures formed at the end of these two events.
Answer:

Question 4.
With a neat diagram explain the 7-celled, 8-nucleate nature of the female gametophyte.
Answer:
Embryo sac is an oval multicellular structure which contains 8 nuclei but 7 cells. 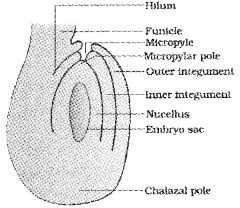