Question 1
Which one of the following is also known as an antidiuretic hormone?
(a) Oxytocin
(b) Vasopressin
(c) Adrenaline
(d) Calcitonin
Answer:
(b) Vasopressin

Question 8.
While studying the excretory system in man, a student noticed some words.
RAAS and JGA. Can you help him to expand these terms.
Answer:
RAAS – Renin – Angiotensin – Aldosterone System
JGA – Juxta glomerular apparatus

Question 10.
State whether true or false and correct the false statements if any: 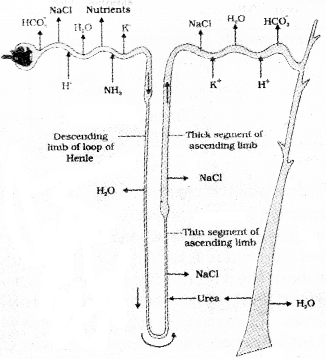 Question 5.
Tadpole is ammonotelic while the frog is ureotelic. Comment on this statement.
Answer:
Tadpole larvae’s habitat is aquatic whereas the frog lives in the terrestrial habitat. So in the aquatic habitat due to the presence of water, ammonia can be excreted easily.

But in frog the water must be conserved. So ammonia is changed into urea which needs only small quantity of water for excretion.

Question 6.
Observe the diagram and answer the following questions. 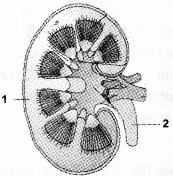 Question 8.
Fill in the gaps:

Question 10.
A patient approaches a doctor having symptoms like excretion of large amount of urine, excessive thirst and dehydration.

Question 11.
A table showing the average quantity of urine in a person in two different seasons are given.

Question 12.
Teacher asks one of the student to name the excretory organs in man. He names three organs beside kidney. Teacher appreciates him for the correct answer. 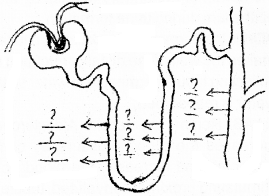 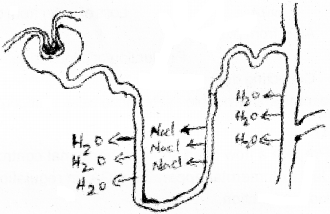 Question 14.
A patient with renal failure in waiting for a kidney donor for a transplantation operation. The urea level is high and the patient is developing symptoms of uremia. What method you can suggest to keep the patient live till a donor can be found. Explain the principle behind it.
Answer:
Haemodialysis. The haemodialyser has a cellophane tube bathed in a fluid with ionic concentration similarto that of plasma. The process of separation of small solutes from macromolecular colloids is done hereby the process of diffusion. So the blood will be free from urea, uric acid and creatinine.

Question 15.
About 125ml of glomerular filtrate is produced per minute in our kidney. However 1ml of urine is produced each minute. What happens to the other 124ml of the filtrate.
Answer:
In man about 125ml of glomerular filtrate is formed per minute. But most of the substances are reabsorbed into tubular network of capillaries. This process is known as selective reabsorption. High threshold substances reabsorbed by active transport and low threshold substances reabsorbed by diffusion. 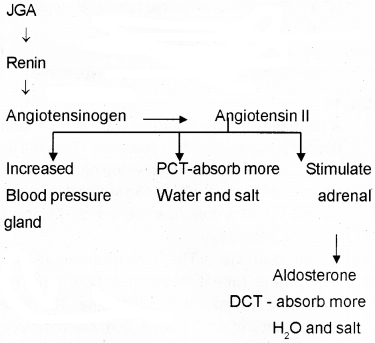 The two limbs of the loop of Henle form another counter current system. These two systems are concentrating the urine in mammalian kidney by diffusion and osmosis.

Question 19.
‘Micturition is an involuntary as well as a voluntary process.’ Justify the statement.
Answer:
The elimination of urine from the urinary bladder is called micturition. The gradual filling of the urinary bladder causes stretching. When the bladder is filled to its limit, the stretch receptors send impulses to the brain to excrete the urine.

Question 20.
In alcoholic drinkers the urine is dilute. Why?
Answer:
The process of reabsorption of water by the distal parts ofthe kidney tubules become low efficient. This occurs due to the deficiency of ADH. lt leads to diabetes insipedus.

Question 1.
State the differences between the following.

Answer:
1. Tubular reabsorption:
The process of selective reabsorption of most of the useful substances from the glomerular filtrate in the renal tubule.

Tubular secretion:
It is the process of active secretion of certain substances such as Hydrogen ions, ammonia etc. from the blood into the lumen of the urinary tubules by the tubular epithelium during urine formation.

2. ADH:
ADH is the hormone from posterior pituitary gland, makes the wall of the distal convoluted tube and collecting tubule permeable to water so that more water is reabsorbed. 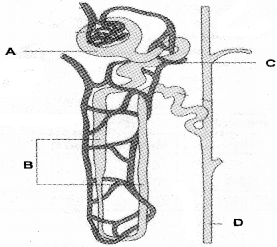 Therefore, as the concentrated filtrate pass upward, it gets diluted due to the passage of electrolytes to the medullary fluid.

Question 3.
Observe the diagram and answer the questions.

Question 4.
Observe the diagram given below which represents the counter-current system in nephron and vasa recta. This mechanism helps in maintaining the concentration gradient in the medullary interstitium. Substantiate. 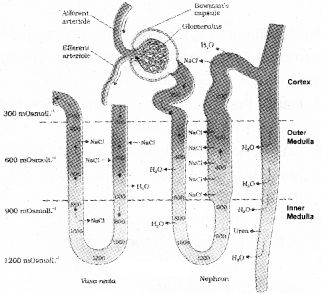 Similarly, small amounts of urea enter the thin segment of the ascending limb of Henle’s loop which in transported back to the interstitium by the collecting tubule. This counter-current mechanism helps to maintain a concentration gradient in the medullary interstitium.

Question 5.
The steps involved in the treatment of a uremic patient is given below. 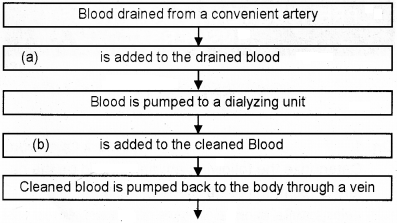 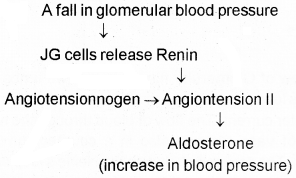 3. An increase in blood flow to the atria of the heart can cause the release of Atrial Natriuretic factor (ANF). ANF can cause vasodilation and thereby decrease the blood pressure. ANF mechanism act as a check on the renin-Angiotensin mechanism.

Question 7.
Note the relationship between the first two words and suggest a suitable word in the missing place.

Plus One Excretory Products and their Elimination NCERT Questions and Answers

Question 2.
Explain the autoregulatory mechanism of GFR.
Answer:
Regulation of GFR. The kidney have built-in mechanisms for the regulation of glomerular filtration rate. One such efficient mechanism is carried out by juxtaglomerular apparatus(JGA).

JGA is a special sensitive region formed by cellular modifications in the distal convoluted tubule and the afferent arteriole at the location of their contact. A fall in GFR can activate the JG cells to release renin which can stimulate the glomercular blood flow and thereby the GFR back to normal.

Question 3.
Indicate whether the following statements are true or false:

Question 4.
Give a brief account of the counter mechanism.
Answer:
Countercurrent Mechanism. The Henle’s loop and vasa recta play a significant role in this. The flow of filtrate in the two limbs of Henle’s loop is in opposite directions and thus forms a countercurrent.

Question 5.
What is meant by the term osmoregulation?
Answer:
Osmoregulation is the regulation of blood volume, body fluid volume and ionic concentration

Question 8.
Fill in the gaps:

Question 2.
Green glands present in some arthropods help in
(a) respiration
(b) excretion
(c) digestion
(d) reproduction
Answer:
(b) excretion

Question 3.
Excretory product of spider is
(a) uric acid
(b) ammonia
(c) guanine
(d) None of these
Answer:
(c) guanine

Question 12.
The characteristic that is shared by urea, uric acid and ammonia is/are
I. They are nitrogenous wastes.
II. They all need very large amount of water for excretion.
III. They are all equally toxic.
IV. They are produced in the kidneys.
(a) I and III
(b) I and IV
(c) I, III and IV
(d) I only
Answer:
(d) I only

Question 13.
Does a bird excrete nitrogenous waste materials in the form of?
(a) uric acid
(b) ammonia
(c) urea
(d) amino acids
Answer:
(a) uric acid

Question 17.
The yellow colour of urine is due to the presence of
(a) urea
(b) uric acid
(c) urochrome
(d) bilirubin
Answer:
(c) urochrome

Question 20.
The conversion of dangerous nitrogenous waste into less toxic excretory matter is carried out in man in the
(a) blood
(b) liver
(c) kidney
(d) skin
Answer:
(b) liver