Question 3.
The breakdown of biomacromolecules in the duodenum is mentioned below. Fill the blank boxes with correct terms. (SAY-2011) 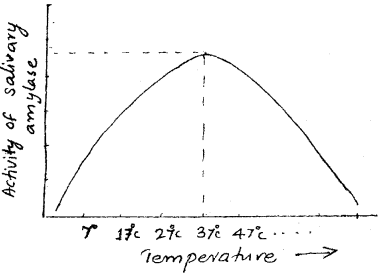 a) Which is the optimum temperature for salivary amylase obtained from the graph.
b) Why the activity declines below the optimum value?
Answer:
a) 37°C
b) Low temperature makes the enzyme inactive.

a) Identify this compound. (MARCH-2013)
b) Name the bond produced when another biomolecule of the same category combines with this.
c) If a number of such molecules are bonded together, what will be the resultant molecule?

Question 9.
Observe the following representation and fill up the blanks appropriately. (SAY-2013)

Question 10.
Observe the graph showing the activity of an enzyme influenced by pH. (SAY-2013) 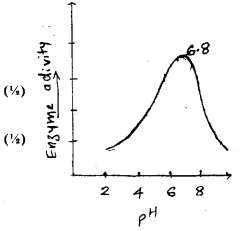 a) Name the possible enzyme involved in this reaction.
b) Where is its site of action?
c) Mention any other factor which affects this enzyme activity that results in a similar pattern of graph.
d) Name another similar enzyme acting on the same substrate.
Answer:
a) Salivary amylase
b) buccal cavity
c) Temperature and substrate concentration
d) Pancreatic amylase 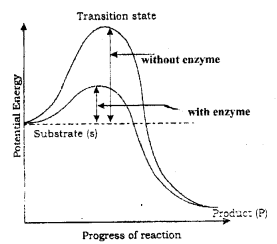 a) Find out the role of the enzyme.
b) Mention any two factors that influence the activity of an enzyme and state their influence.
Answer:
a) Enzyme lower the activation energy and reaction proceeds at rate faster than that of uncatalysed reaction.
b) Enzyme shows highest activity at optimum temperature and PH.

Question 12.
Name the chemical bonds formed between the following : (MARCH-2014)
a) Amino acids in a protein molecule
b) Sugar and phosphate in nucleic acids.
Answer:
a) Peptide bond
b) Phospho diester or Ester bond

Question 13.
Distinguish between cofactor and coenzyme with an example for each. (MARCH-2014)
Answer:
Co-factor — Inorganic or metallic ions which form non protein part of an enzyme Eg- Zinc in carboxy pep-tidase
Coenzyme — Non protein organic part of enzyme Eg – FAD/NAD

Question 14.
a) Why are proteins heteropolymers? (SAY-2014)
b) Identify the protein from the given list of biomacromolecules and write its function. (Cellulose, Starch, Antibody, Inulin)
c) Identify the type of protein structures of ‘A’ and ‘B’.

Symbolic representation of a functional enzyme is given below.
a) Write one difference between a co-factor and an Apoenzyme.
b) Name the different types of co-factors.
c) What is the co-factor for the enzyme, Carbox- ypeptidase?
Answer:
a) Because it is made up of different aminoacids antibody- act against foreign bodies coming into the body
b) A -secondary structure B-Tertiary structure
OR
a) Co-factor—non protein part of an enzyme
Apoenzyme -Protein part of enzyme
b) Three kinds of cofactors are identified: prosthetic
groups, co-enzymes and metal ions
c) zinc is a cofactor for the proteolytic enzyme
carboxypeptidase

Question 15.
Select the wrongly matched pair from the following: (MARCH-2017) 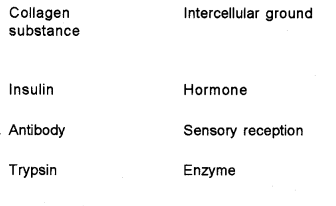 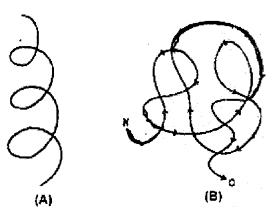 Question 17.
Analyze the graph showing the activity of an enzyme, influenced by temperature (MARCH-2015)
a) What is meant by optimum temperature?
b) Why does the enzyme activity decline at too high temperatures?

Answer:
a) Enzyme shows its highest activity at a particular temperature called the optimum temperature, b) Low temperature preserves the enzyme in a temporarily inactive state whereas high temperature destroys enzymatic activity because proteins are denatured by heat.

Question 21.
Identify the given biomolecule that comes under the fat. (SAY-2016)

Question 22.
a) Name the biomacromolecule (polymer) in which the peptide bond is present. (SAY-2016)
b) Name the bond present between the phosphate and the hydroxyl group of sugar in nucleic acids.
Answer:
a) Protein b) phosphodiester bond

Question 23.
Identify the given biomoledules. (MARCH-2017) 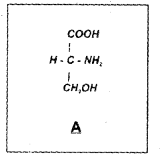 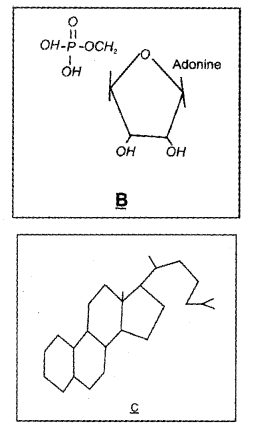