Kerala Plus One Physics Notes Chapter 5 Law of Motion

Summary
Introduction
In this chapter we are going to learn about the laws that governs the motion of bodies.
Inertia:
The inability of a body to change by itself it’s state of rest or uniform motion along a straight line is called inertia.
Examples of inertia:
1. When a fast-moving bus is suddenly stopped, a standing passenger tends to fall in the forward direction.
Explanation
The passenger has the same velocity as that of the bus. When the bus stops suddenly the lower part of his body is brought to rest suddenly because of the friction between his feet and floor of the bus. But the upper part continues to move because of its inertia.

2. When a bus suddenly takes off, a standing passenger tends to fall in the backward direction. This is because the lower part of the body gets a speed when the bus picks up speed and upper part continues to be at rest because of its inertia.

4. Cleaning a carpet by beating is in accordance with law of inertia.

5. Rabbit chased by a dog runs in zigzag manner. This is to take advantage of the large inertia of the massive dog.

6. A person chased by an elephant runs in a zigzag manner or in a circle. This is to take the advantage of the large inertia of the massive elephant.

Newton’s Laws:
Newton built on Galileo’s ideas and laid the foundation of mechanics in terms of three laws.

Newton’s First Law Of Motion
Everybody continues in its state of rest or of uniform motion along a straight line unless it is compelled by an external unbalanced force to change that state:
Note: Newton’s first law of motion brings the idea of inertia. Inertia of a body is measured by the mass of the body. Heavier the body, greater is the force required to change its state and hence greater is its inertia.

Newton’s Second Law Of Motion
Linear Momentum (\(\vec{p}\)):
Momentum of a body is defined as the product of its mass m and velocity \(\vec{v}\)

1. Mass of the body:
When a ball and a big stone are allowed to fall from the same height, we find that a greater force is required to stop the big piece of stone than the ball. Thus larger the mass of a body, greater is its linear momentum.

2. Velocity of the body:
A bullet thrown with the hand can be stopped easily than the same bullet fired from the gun. Therefore, langerthe velocity of a body, greater is its linear momentum.
Note: Momentum is a vector quantity. Its unit is Kgms-1
Newton’s Second Law of motion:
The rate of change of momentum of a body is directly proportional to the applied force and takes place in the direction in which the force acts. Mathematically this can be written as

Question 1.
Derive F = ma from Newton’s Second law.
Answer:
Consider a body of mass ‘m’ moving with a momentum \(\vec{p}\). Let \(\vec{F}\) be the force acting on it for time internal Dt. Due to this force the momentum is changed from \(\vec{p}\) to p + Dp. Then according to Newtons second law, we can write

Where K is a constant proportionality. When we take the limit ∆t → 0, we can write 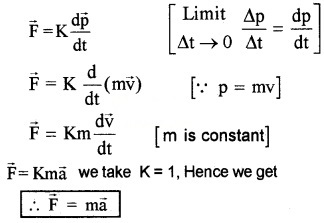 Unit of force:
Unit of force is newton. 1N = 1Kgms-2
Force in terms of the components:
We know force is a vector, Hence we can write as

Impulse:
An impulse force does not remain constant, but changes from zero to maximum. This impulsive force is not easy to measure, because it changes with time. In such a case, we measure the total effect of the force called impulse.

The impulse of a force is the product of the average force and the time for which it acts.

Conservation Of Momentum
Second law and third law lead to conservation of linear momentum.
Statement:
When there is no external force on a body (or system), the total momentum remains constant.

Proof in the case of a single body:
According to Newtons second law, F = \(\frac{d p}{d t}\). if F = 0, we get p = constant. Which means that momentum of a body remains constant, if there is no external force acting on it.

Conservation of momentum in the case of two colliding bodies:

Consider two bodies A and B with initial momenta PA and PB. After collision, they acquire momenta P1A and P1g respectively.
According to Newton’s second law, the change in momentum of A due to the collision with B,

Similarly the change in momentum of B due to the collision with A, FBA∆t = P1B – PB

[Where Dt is time for which the two bodies are in contact].
According Newton’s third law, we can write
FAB = -FBA

Equilibrium Of A Particle
Equilibrium of a particle in mechanics refers to the situation, when the net external force on the particle is zero.

Common Forces In Mechanics
There are two types of forces commonly used in mechanics,

Friction:
Friction is the force that develops at the surfaces of contact of two bodies and impedes (opposes) their relative motion.
There are different types of friction.

a. Laws of Kinetic friction:

c. Coefficient of Kinetic friction:
The force of kinetic friction is directly proportional to the normal reaction N.
i e (fk)max α N

Proof:
Consider a body placed on a surface. Let N be the normal reaction and flimit is the limiting friction. Let ‘θ’ be the angle between Resultant vector and normal reaction. From the triangle OBC, 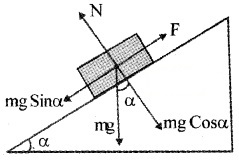 Consider a vehicle moving over a level curved road. The two forces acting on it are 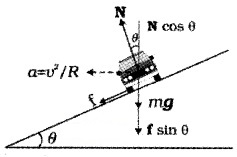 Question 5.
Why surface of the road is kept inclined to the horizontal?
Answer:
Consider a vehicle moving along a level curved road. The vehicle will have a tendency to slip outward. This outward slip is prevented by frictional force. But friction causes unnecessary wear and tear. More over, for typical value of µ and R the maximum speed v = \(\sqrt{\mu_{s} \mathrm{rg}}\) rg will be very small.

These defects can be avoided if we raise the outer edge of the road slightly above the inner edge. This process is called banking of curve. The angle made by the surface of the road with the horizontal is called the angle of banking. 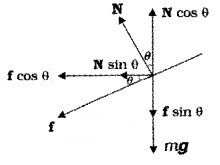 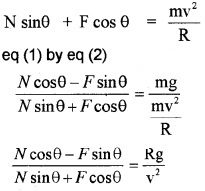 Consider a vehicle along a curved road with angle of banking q. Then the normal reaction on the ground will be inclined at an angle q with the vertical. 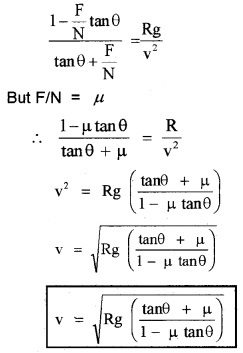 Dividing both numerator and denominator of L.H.S by N cosq. We get

This is the maximum speed at which the vehicle can move over a banked curved road.

Optimum speed:
Optimum speed is the speed at which a vehicle can move over a curved banked road without using unnecessary friction.
When a car is moved with optimum speed Vo, m can be taken as zero.
putting m = 0 in the above equation we get 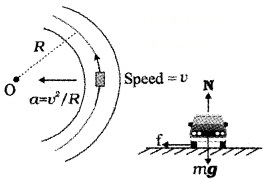