Kerala Plus One Physics Improvement Question Paper Say 2017 with Answers

Question 2.
The work done during an isochoric process is …………
Answer:
Zero

Question 8.
A body is rolling on a horizontal surface. Derive an equation for its kinetic energy.
Answer:
Consider a body rotating about an axis passing through some point O with uniform angular velocity ‘ω’. The body can be considered to be made up of a number of particles of masses m1, m2, m3 ………. etc at distances r1, r2, r3 …….. etc. All the particles will have same angular velocity ω. But their linear velocities will be different say v1, v2, v3, ………. etc. 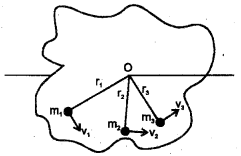 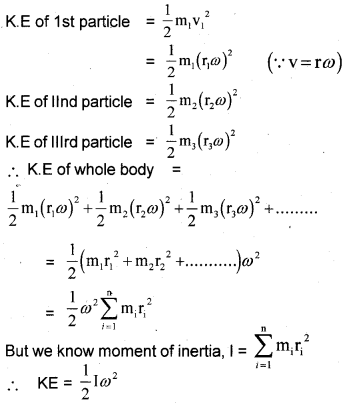 Question 9.
The stress-strain graphs for two materials A and B are shown below (the graphs are drawn using the same scale) Which one is more elastic? Why?

Question 10.
“A heavy and a light body have the same kinetic energy.” Which one has greater momentum? Why?
Answer: 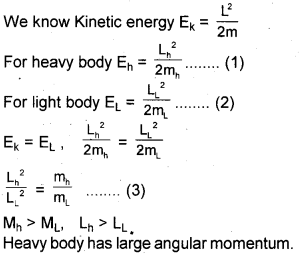 Question 11.
The following figures refer to the steady flow of a non-viscous liquid. Which of the two figures is correct? Why?

Answer:
Figure (b). When water flows through a narrow pipe, its velocity increases. Hence pressure at narrow part decreases. As a result, the height of water level decreaes at narrow part.

Question 13.
According to conservation of energy “energy can neither be created nor be destroyed.”
a) Prove law of conservation of mechanical energy in the case of a freely falling body.
b) The bob of a pendulum of length 1.5 m is released from the position ‘A’ shown in figure. What is the speed with which the bob arrives at the lower most point B, given that 5% of its initial energy is dissipated against air resistance? 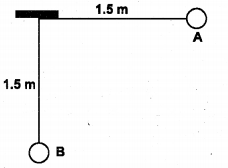 Answer:
a) Conservation of mechanical energy for a freely falling body

b) 5% energy is lost due to friction. Hence energy at bottom is 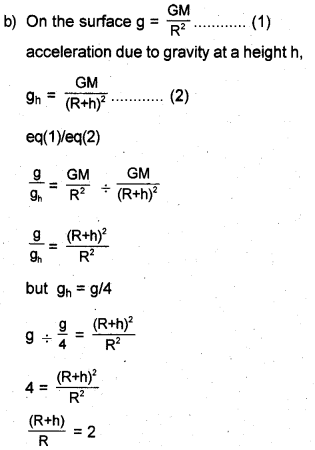 Question 15.
A metal sphere of density ‘ρ’ and radius ‘a’ is falling through an infinite column of liquid of density ‘σ’ and coefficient of viscosity ‘η’.
a) Name any two forces acting on the sphere.
b) With the help of Stoke’s theorem, derive an equation for the terminal velocity of the sphere.
Answer:
a) Gravitational force and viscous force
b) If a body is moving through a fluid, its velocity is influenced by the viscosity of the medium.
Considers small sphere of radius ‘a’ falling under gravity in air: The viscocity of air opposes the motion of the sphere. This opposing force is called viscous force and can be written as.
F = 6πaηv
This is called stokes, formula.
Where η is the coefficient of viscosity of the medium and v is the velocity of the body.

Question 16.
Condition is the mode of transfer of heat in solids.
a) Write the unit of thermal conductivity
b) “Burns produced by steam is severe than that produced by boiling water” Why?
Answer:
a) JS-1m-1K-1 or Wm-1K-1
b) Steam contains more energy than boiling water.

Question 17.
A gas has ‘f’ degrees of freedom
a) Calculate its Cp, Cv and γ
b) Define mean free path.
Answer:
a) (Molar specific heat capacity)
In general a polyatomic molecule has 3 translational, 3 rotational degrees of freedom and a certain number (f) of vibrational modes.
The energy of one mole polyatomic gas, 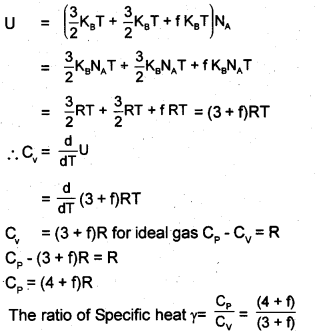 Question 18.
A satellite moves in a circular orbit of raius ‘r’ with an orbit velocity.
a) Derive an equation for the orbit velocity of a satellite.
b) The time taken by Saturn to complete one orbit around the Sun is 29.5 times the earth year. If the distance of earth from the Sun is 1.5 × 108 km, then what will be the distance of the Saturn from the Sun?
Answer:
a) Consider a satellite of mass m revolving with orbital velocity ‘v’ around the earth at a height ‘h’ from the surface of earth. Let M be the mass of earth and R be radius of earth. 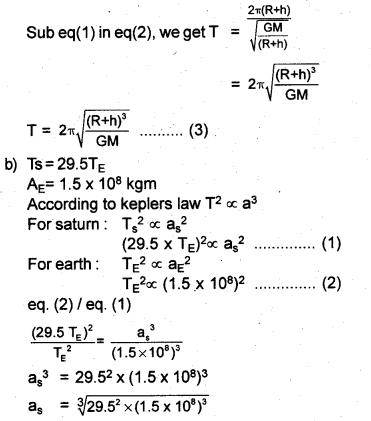 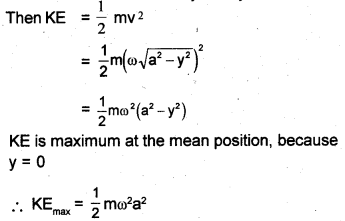 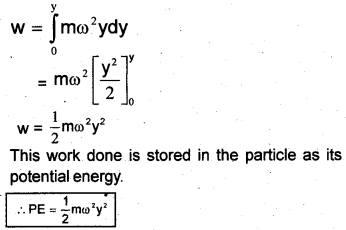 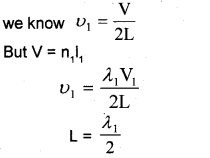 General relation can be written as  L = (\(n \frac{\lambda}{2}\))
The string vibrate in a single segment as shown in figure. 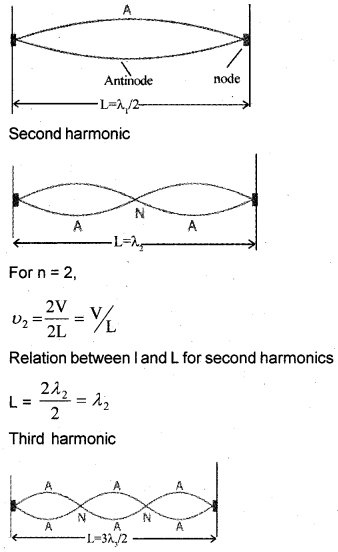 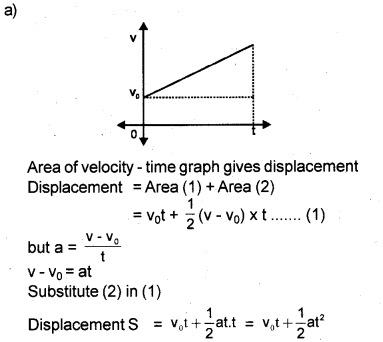 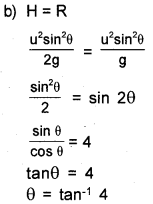 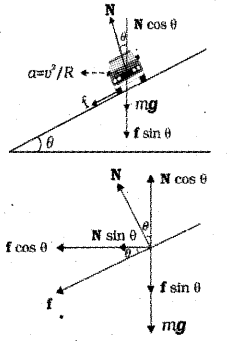 Consider a vehicle along a curved road with angle of banking θ. Then the normal reaction on the ground will be inclined at an angle θ with the vertical. 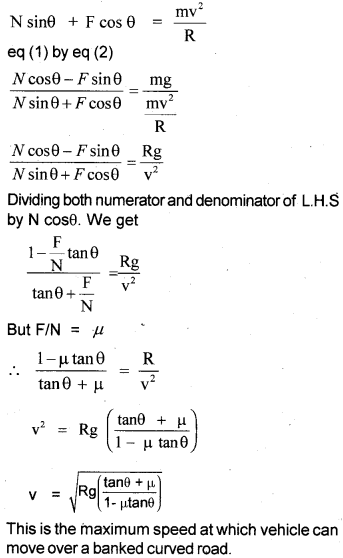 Question 26.
Carnot engine is considered as an ideal heat engine.
a) Draw the P-V graph of Carnot’s cycle.
b) Derive an equation to find the work done during an adiabatic process.
c) Calculate the efficiency of a heat engine working between ice point and steam point.
Answer: 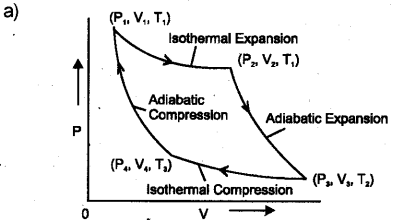 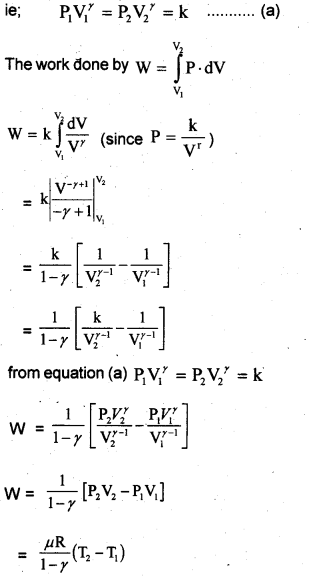 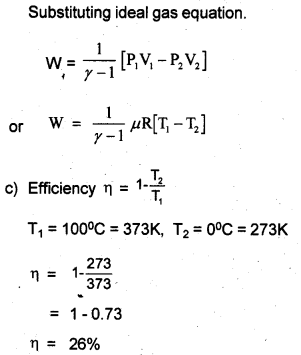