Question 3.
When cooking oil is heated in a frying pan, the oil moves around in the pan more easily when it is hot. The main reason for this is that with rise in temperature, there is a decrease in
(a) surface tension
(b) viscosity
(c) angle of contact
(d) density
Answer:
(d) density

Question 4.
At what temperature density of air is maximum?
Answer:
4°C

Question 5.
A thin glass plate is lying on a wet marble floor, It is difficult to pull the glass plate because of
(i) surface tension
(ii) Viscosity
(iii) friction
(iv) atmosphere
(v) Gravity
Answer:
(i) Viscosity

Question 6.
Why do clouds float in the sky?
Answer:
Zero terminal velocity

Question 7.
A spinning cricket ball does not follow parabolic path. Why?
Answer:
Due to the magnus effect.

Question 10.
Why more viscous oil is used in summer than in winter in scooters?
Answer:
The viscosity decreases with increase in temperature.

Question 11.
Why is sand drier than clay?
Answer:
Capillary action

Question 12.
Why cotton dress is preferred in summer?
Answer:
Cotton dresses have fine pores which act as capillaries for the sweat.

Question 13.
Why oil is poured to calm the sea?
Answer:
When oil is poured in water, the surface tension of water is reduced and water spreads over large area of sea.

Question 16.
How ploughing a field helps to retain moisture?
Answer:
When field is ploughed, capillaries are broken and hence water can not rise up and retains moisture.

Question 2.
Why is hot soup tastier than cold one?
Answer:
When temperature increases, the surface tension of soap decrease. Hence hot soap can enter into tiny pours of taste buds.

Question 3.
Why straws are used to drink soft drinks?
Answer:
When we suck the straw, pressure inside straw becomes lower than atmospheric pressure. This pressure difference cause the soft drink to rise through the straw.

Question 2.
A child dipped two identical capillary tubes, one in a beaker containing mercury. He observed that water and mercury have risen through the tubes to certain heights.

Atomizer is used for getting a fine spray of perfumer or insecticide. It consists of a cylinder with a piston. A small vessel containing liquid to be sprayed is attached to the cylinder. When the piston is moved forward air is blown out through a small opening of the cylinder.

Question 4.
Surface tension is numerically equal to the surface energy.

Answer:
1. Liquids acquire a free surface when poured in a container. These surfaces possess some additional energy. This phenomenon is known as surface tension.

Question 6.
Give reasons for the following cases.

Answer:
1. The density of sea water is more than that of river water due to the presence of salt. Hence sea water offers more upthrust and only a very small portion of human body will be in seawater compared to river water.

2. In ink pen, ink is filled in atmospheric pressure. As we go higher pressure decreases and hence ink will have a tendancy to come out in order to equalise the pressure.

Question 1.
A large tank containing water has a small hole near the bottom of the tank 1.5 m below the surface of water.

Question 2.
Raindrops have an average size of 1 mm when it is formed at the upper atmosphere.

Answer:
1. Due to viscous force acting on the raindrop, it moves with uniform speed.

2. Viscous force, boyancy force and weight of the body
Expression for terminal velocity:
Consider a sphere of radius ‘a’ densitity σ falling through a liquid of density a and viscocity η. The viscous force acting on the sphere can be written as
F = 6πaηv
Where v is the velocity of sphere. This force is acting in upward direction. When the viscous force is equal to the weight of the body in the medium, the net force on the body is zero. It moves with a constant velocity called the terminal velocity.
The weight of a body in a medium,

When body has terminal velocity, we can write.

2. A girl dips a thin capillary tube in water:

Question 4.
The schematic diagram of a sprayer or atomiser is given below.

3. When the aeroplane moves forward, the air blown in the form of streamlines over the wings of aeroplane is shown in figure.

As the upper surface of wing is more curved than its lower surface, the speed of air above the wings is larger than the speed of the air below the wings.

Hence the pressure above the wings becomes less than the pressure below the wings. Due to this pressure difference the aeroplane will get upward force to overcome gravitational force.

Question 5.
During windstorms, roofs of certain houses are blown off without damaging other parts of the houses.

Question 6.
Two thin evacuated (one end closed) glass take A and B are carefully immersed in a beaker containing mercury such a way that there is no chance to get air in to the tubes. A is stand vertically and B is making an angle θ with the vertical.

Question 7.
A small metal sphere is falling through a caster oil.

Question 1.
A capillary tube when dipped into water, it is commonly observed that water will rise through the tube. 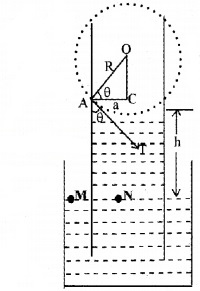 Consider a capillary tube of radius ‘a’ dipped in a liquid of density ρ and surface tension S. If the liquid has a concave meniscus it will rise in the capillary tube. Let h be the rise of the liquid in the tube. Let p1 be the pressure on the concave side of the meniscus and p0, that on the other side. The excess pressure on the concave side of the meniscus can be written as
p1 – p0 = \(\frac{2 \mathrm{S}}{\mathrm{R}}\)
Where R is the radius of the concave meniscus. The tangent to the meniscus at point A makes an angle θ with the wall of the tube.
In the right-angled triangle ACO

substituting the values of R in the equation (1) 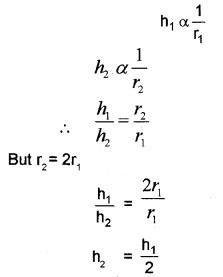 The capillary rise decreases to half of the original value.

Answer:
1. Hydraulic lift – It is based on pascals law.

2. Venturimeter can be used to find the velocity of flow of fluid through a pipe. 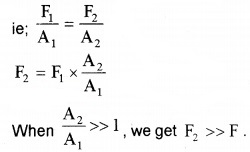 Using this method we can lift heavy load by applying small force.

Question 3.
When a capillary tube of radius ‘r’ is dipped in water, the water rises through it up to height ‘h’.

3. The water will never overflow. If the tube is of insufficient length, the radius of curvature of liquid meniscus goes on increasing, making it more and more flat till water is in equilibrium.

Question 4.
A steel ball of radius 1 mm is falling vertically through a tank of oil at 30°C.

Plus One Physics Mechanical Properties of Fluids NCERT Questions and Answers

Question 3.
A U-tube contains water and methylated spirit separated by mercury. The mercury columns in the two arms are in level with 10.0 cm of water in one arm and 12.5 of spirit in the other. What is the specific gravity of spirit? 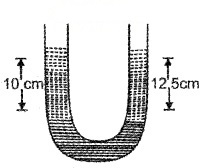 Question 4.
Figs, (a) and (b) refer to the steady flow of a non-viscous liquid. Which of the two figures is incorrect? Why?

Answer:
Fig (a) is incorrect. This is because at a constriction (ie., where the area of cross-section of the tube is smaller), the flow speed is larger due to mass conservation. Consequently, pressure there is smaller according to Bernoulli’s equation. We assume the fluid to be incompressible.

Question 6.
During blood transfusion, the needle is inserted in a vein where the guage pressure is 2000 Pa, at what height must the blood container be placed so that blood may just enter the vein? Given: density of whole blood = 1.06 × 103kgm-3
Answer:
Guage pressure,
p = hρg, h

Plus One Physics Chapter Wise Questions and Answers