Question 1.
Nobody can imagine a world without sound. Sound is a part of our life  musics, ripples, echoes etc. have a lot of applications. [March – 2010]
(a) Can you say how a bat can ascertain directions and distances without any eyes’?
(b) Doctors use an ultrasonic scanner to diagnose tumour tissues. If the frequency of the scanner is 4.2 MHz and the speed of sound wave in the tissue is 1.7 kms, find the wavelength of the sound wave.
(c) Obtain the equation of a standing wave. Then plot it to locate the nodal and antinodal points.
Answer:
(a) Bats can produce ultrasonic sounds. The ultra-sonic sounds reflected from the object helps to identify direction and distance.
(b) Velocity of sound, v = μλ. 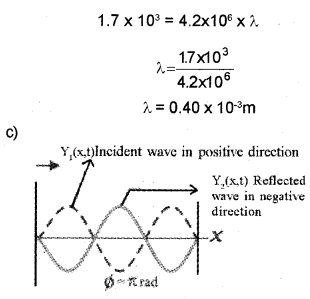 Antinode:
The amplitude has maximum value 2a when (2a sin kx = 2a) 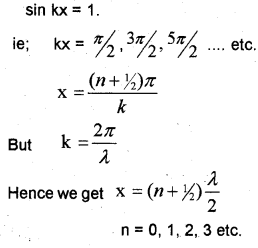 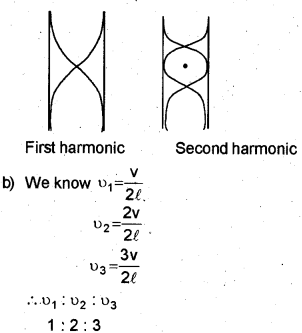 Question 3.
(a) Wave motion is a propagation of energy through a material medium due to repeated periodic motion.
(i) Transverse waves cannot be propagated through gases. Why? [May -2011]
(ii) What was the condition assumed by Laplace in correcting Newton’s equation for the veloc­ity of sound in a gas? Write the Newton- Laplace equation.
(b) A source of sound of frequency 256 Hz is in between a listener and a wall. If the source is moving towards the wall with a velocity of 5 ms-1 how many beats per second will be heard if the sound travels with a speed of 330 ms-1?
Answer:
(a) 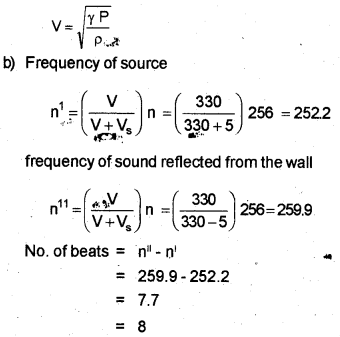 Question 4.
In a laboratory Raju uses a tuning fork in resonance column experiment. [March-2011]
(a) What type of wave is produced by the tuning fork . in the case?
(b) Mention any four characteristics of these waves.
Answer:
(a) Longitudinal wave
(b) Properties of longitudinal wave

Question 5.
Fill in the blanks: 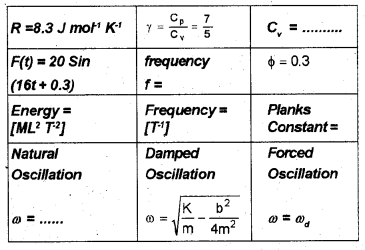 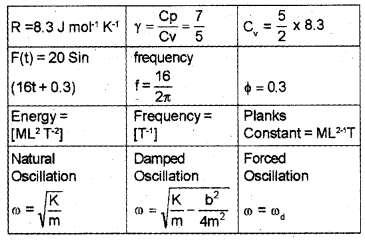 Question 6.
While conducting a resonance column experiment in the laboratory, you can hearthe maximum sound at a certain height. [March – 2012]
(a) Explain the phenomenon of sound.
(b) Show that in a closed pipe at one end, the fre­quencies of the first three harmonics are in the ratio of o,: u2:u3: = 1 : 3 : 5.
(c) Open pipes are preferred to closed ones in musi­cal instruments. Why?
Answer:
(a) If a wave is produced at the open end of a tube it travels through the gas column and gets reflected at the closed end. At a certain height of tube the incident wave and reflected wave superpose each other and produce stationary wave and a sound is heared. This is called resonance. The open end always represents an antinods. 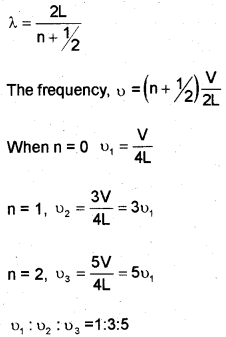 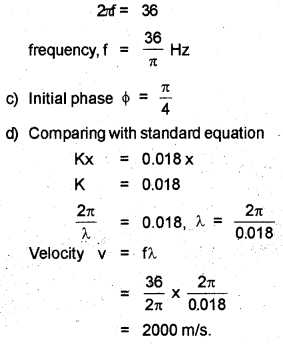 Question 8.
A student plucks at the center of a stretched string and observes the wave pattern produced. [March – 2013]

(b) At antinode
The amplitude of oscillation is more at antinode. Hence we hear a louder sound at antinode.

Question 10.
The equation for a wave is given below. [March -2014]
y = Asin(kx +ωt)
(a) Is it a travelling or stationary wave
(b) Draw the stationary waves in a stretched string in the second harmonic.
(c) Show that the fundamental frequency of an open pipe is twice the fundamental frequency of a closed pipe of the same length.
Answer:
(a) Travelling Wave 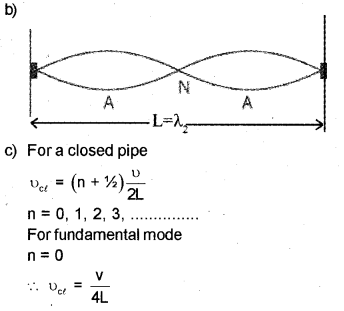 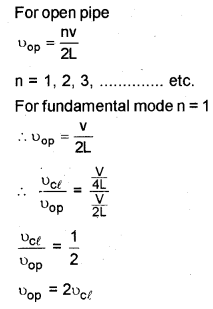 Question 12.
While performing the resonance column apparatus experiment in a laboratory at a certain height, you can hear maximum sound. [March – 2015]
(a) Name the physical concept behind it.
(b) Explain with diagrams,the normal modes of vi­bration in the case of air in an open tube.
(c) Open pipes are preferred to closed one in musi­cal instruments. Why? 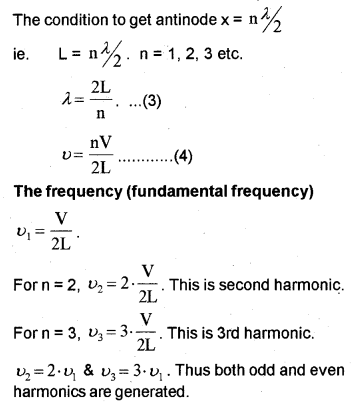 Question 13.
The pitch of the siren of a fire engine increases as it approaches a boy standing at a bus stop. [May – 2015]
(a) The phenomenon behind it, is due to …

(b) Obtain a general expression for the apparent frequency of the siren as heard by the boy.
Answer:
(a) (i) Doppler effect

(b) The apparent change in the frequency of sound wave due to the relative motion of source or lis­tener or both is called Doppler effect. It was pro­posed by John Christian Doppler and it was ex­perimentally tested by Buys Ballot.

Considers source is producing sound of frequency v. Let V be the velocity of sound in the medium and λ the wavelength of sound when the source and the listener are at rest

Let the source and listener be moving with veloci­ties vs and vl in the direction of propogation of sound from source to listener. (The direction S to L is taken as positive)
The relative velocity of sound wave with respect to the source = V – Vs
Apparent wavelength of sound,
\(\lambda^{1}=\frac{V-V_{s}}{v} \ldots \ldots \cdots ….(1)\)

Question 15.
A woman is travelling in a car at a speed of 25m/s. She is moving away from a source producing a sound of 512 Hz.
(a) Calculate the frequency of sound heard by her. (Speed of sound in air = 340 m/s) [March – 2016]
(b) Name the phenomenon that explains this variation infrequency.
(c) Draw the second harmonic of an open pipe (both end open). Mark a node and an antinode in the figure.
Answer: 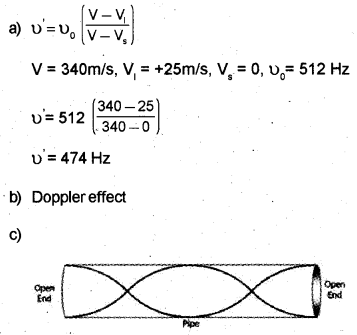 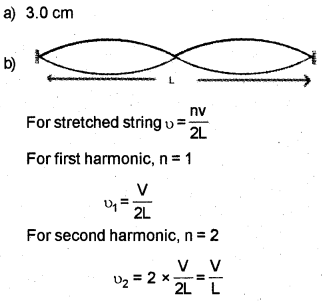