Question 1.
a) Which among the following possess the highest specific heat capacity? (MARCH-2010)
i) Water
ii) Silver
iii) Copper
iv) Steel
b) You are in a restaurant waiting for your friend and ordered coffee. It has arrived. Do you add sugar in your friend’s coffee and then wait for him or do you add sugar after he arrives?
Explain with respect to the concept of cooling.
c) Read the statement given in a book “All thermal conductors are electrical conductors also.”
Do you agree with this statement? If your answer is No, clarify it.
Answer:
a) i) water
b) Add sugar to coffee and then wait. When we add sugar to coffee, the temperature of coffee decreases. Hence rate of cooling also decreases.
c) No. Mica is a good conductor of heat but it is a bad conductor of electricity.

Question 2.
The volume temperature graph of a certain amount of perfect gas at two pressures P1 and P2 are shown. (MAY-2011)
Which pressure is larger P1 or P2? Give Reason. 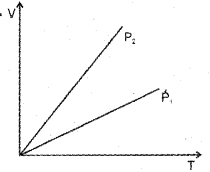 Absoulte zero is the minimum temperature that can be reached by a system. Explain why temperature below absolute zero is not possible.
Answer:
p1> p2 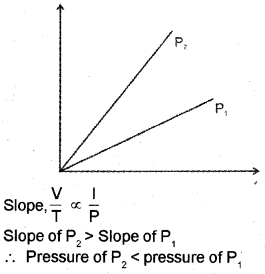 OR
Temperature is a measure of kinetic energy. The mini-mum value of possible KE is zero and it can’t be negative.
Below absolute zero, the volume of a system be-comes negative. Practically this is not possible.

Question 3.
Sitha prepares tea for her brother. After preparing tea the temperature of the tea was 80°C. She kept it for 5 minutes and gave to her brother when the tem-perature reached 50°C. If the surrounding temperature is 20°C, calculate the time it takes to cool from 60° C to 30°C. (MAY-2011)
Answer:
Case I 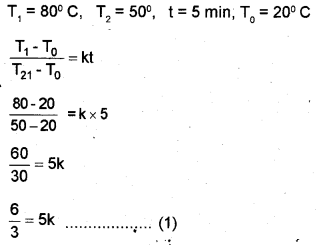 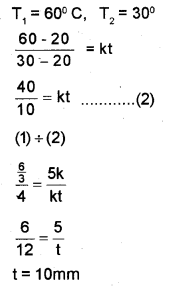 Question 4.
Temperature is the degree of ‘hotness’ of the body. (MARCH-2012)
a) Temperature of normal human body is 98.6°F. What is the corresponding temperature shown in the Celsius scale?
b) Specific heat capacity of water is 4186 J/kg/K.
What do you understand by the term; specific heat?
c) A brass tumbler feels much colder than a wooden tray on a chilly day. Why?
d) A brass boiler has a base area of 0.15m2 and thickness 1.0 cm. It boils water at the rate of 6.0kg/ minute when placed on a gas stove. Estimate the temperature of the part of the flame in contact with the boiler. Thermal conductivity of brass =109 Js-1 m-1 K-1.
Heat of vapourization ofwater=2256 x 103jKg-1.
Answer:
a)

b) Specific heat capacity of a substance is defined as amount of heat required to increase temperature of unit mass of substance by one unit.
c) Thermal conductivity of thumbler is larger than wooden tray. Hence a brass thumbler feels much colden than a wooden tray.
d) 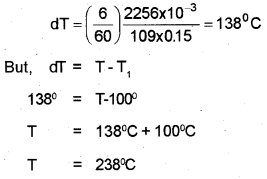 Question 5.
Heat from the sun reaches earth through vacuum. (MAY-2012)
a) Name the mode of heat transfer in the above case.
b) Name the different modes of heat transfer in metals and in liquids.
c) Aquatic animals are protected in cold countries as ice is formed on the surface of river. How?
Answer:
a) Radiation
b) Metals – Conduction
Liquids – Convection
c) ice is a bad conductor of heat. Hence ice prevents heat flow from underwater. Thus underwater aquatic animals are protected.

Question 6.
There are three distinct modes of heat transfer. (MARCH-2013)
a) The main mode of transmission of heat by which the sun heats the surface of the earth is:
i) Conduction
ii) Convection
iii) Radiation
iv) None of these
b) Explain briefly, the occurrence of a sea breeze based on heat transfer.
Answer:
a) Radiation
b) During the day, land heats up more quickly than , water in lake (due to high specific heat capacity
of water). The air on the surface of earth gets heated, expands, becomes less dense and rises up. The colder air (wind) replaces the space created by hot air. It creates a sea breeze. At night the land loses its heat very quickly than water. So water remains more warmer at night. 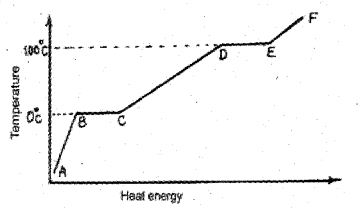 The above graph represents temperature versus heat for water at 1 atm. pressure.
a) Match the following using the above graph.

b) The slopes of AB and CD are different. Why?
Answer:
a)

Question 13.
Graph below exhibits the anomalous expansion of water. (MARCH-2017) 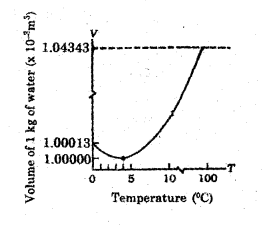 Based on the graph, explain how lakes freeze from the top to bottom rather than from bottom to top.
Answer:
At 4°C, water has minimum volume and hence maximum density. As lake cools towards 4°C, water near the surface becomes denser and sinks. The warmer less dense water near the bottom rises and freezes.