Kerala Plus One Economics Improvement Question Paper say 2018 with Answers

Question 2.
The stage of demographic transition prevailed in India before 1921 was ………….
a) First stage
b) Second stage
c) Third stage
d) None of these
Answer:
a) First stage

Question 4.
Non-sampling error can be minimized by taking …………
a) Small sample
b) large sample
c) medium sample
d) none of these
Answer:
Any answer

Question 8.
Unemployment is one of the major hurdles in India’s growth path. In this context, differentiate the concepts of open unemployment and disguised unemployment.
Answer:
Open unemployment: It refers to that situation in which the worker is willing to do work yet he does not get work.

Disguised unemployment: In this case the number of people engaged in a work is more than what is needed for the work. They do not contribute to productive work and even if withdrawn do not result in a fall in output.

Question 10.
Statistics is an indispensable tool for an economist. It helps him to understand an economic problem. List the other two uses.
Answer:

Growth:
It refers to an increase in the productive capacity of a country. GDP is the generally used indicator of growth. In India the share of agriculture has been declining over the years and that of service sector has been rising.

Equity:
Growth, modernisation and self-reliance can be meaningful only if the fruits of development are equitably shared between all the sections of the population.

Modernisation:
Modernisation means adoption of modern technologies with the view to increase production and productivity.

Self-reliance:
Self-reliance means ability to depend on one self. India adopted the policy of import substitution.

Question 14.
Draw a pie diagram based on the following data. 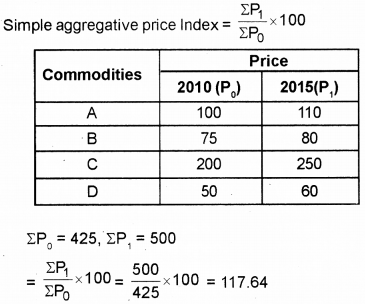 Question 16.
The following are the steps towards making a project. Arrange them orderly.
Choice of target group, conclusion, organization and presentation of data, analysis and interpretation, Collection of data. Identifying a problem on an area of study.
Answer:
Identifying the problem

Question 17.
The Government of India adopted three-dimensional approach to attack the poverty in the country. Briefly analyze the third approach of “Provide minimum basic facilities to the people.”
Answer:
The third approach adopted in India to address the issue of poverty was through provision of minimum basic amenities to the people. The approach was adopted from the fifth plan onwards. It involves making public expenditure in areas like education, health, sanitation etc. with a view to improve the standard of living of the poor.

Under this approach there are three programmes to improve nutritional status of poor households. 1 PDS, 2 CDS and 3 Mid-day meal Scheme (MDMS). Many social security programmes were also launched to provide financial security to elderly people, poor women and widows.

There are benefits in the formal sector. Some of them are:

Question 19.
Poverty means not having enough money for basic needs such as food, drinking water, shelter or toilets.
Briefly explain the major causes of poverty in India. How do you measure it?
Answer:
Causes of poverty:
Poverty in India can be attributed to a number of socio-economic and political factors.

Question 20.
Under the various articles of the Indian Constitution, free and compulsory education is provided as a fundamental right to children between the ages of 6 and 14. On this context, analyze the education sector in India.
Answer:
In December 2002. the Government of India through the 86th Amendment of the constitution, education included in fundamental rights. Accordingly the state shall provide free and compulsory education to all children of the ageof6-14years. In 2009, Government also passed a law on education rights.

There is a need to step up expenditure at all the levels of education to bring about a balance at various levels. Moreover government has also introduced many loan schemes for promotion of higher education.

Large scale achievements made in the education sector in India after independence.

Question 21.
Rural development is the process of improving the quality of life and economic well being of people living in rural areas. Specify the areas which are challenging and need fresh motives for rural development. Elucidate.
Answer:
There are some areas challenging for rural development so we have to improve the following areas. Agriculture diversification is a system of farming that encourages production of a variety of plant and animals and their products. Non-farm employment

This is helpful not only in liberating the small and marginal farmers from the poverty trap, but also to meet the country’s growing demands for fruits, vegetables, milk and milk products, meat, fishes, eggs etc. which generally show rising trends with increasing levels of per capita income in the economy.

Question 23.
The following table shows the scores obtained by 5 dancers in a dance competition. Find the rank correlation coefficient. 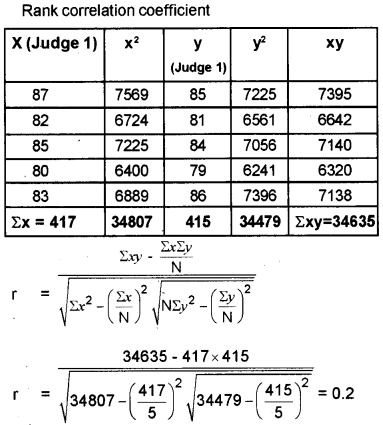 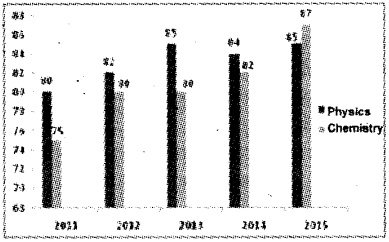 Due to commencement of WTO a lot of policies have changed which have adversely affected the Indian farmers. Moreover because of export-oriented policy in agriculture there has been a shift from production for the domestic market towards production for export mark focusing on cash crops instead of food grains. This has resulted in the price rise of food grains.

In short India’s agricultural sector is badly affected by the reform process.
The industrial sector has performed poorly during reform period due to the reasons are:

However the government has also made attempts to improve the efficiency of PSUS by giving them autonomy in taking managerial decisions.

Power / Electricity:
The most visible form of energy whcih is often identified with progress in modern civilization, is power, commonly called electricity. It determines the economic development of a country.

State of India’s Environment:
India has abundant natural resources in terms of rich quality of soil, hundreds of rivers and tributaries, lush green forests, plenty of mineral deposits beneath the land surface, vast stretch of the Indian ocean, ranges of mountains etc. However, the developmental activities in India have resulted in pressure on its finite natural resources. Besides creating impacts on human health and well-being.

Global Warming:
Global warming is the gradual increase in the average temperature of the earth’s lower atmosphere as a result of the increase in greenhouse gases.

Pollution:
There are different types of pollutions existing in environment which are given.
1. Air pollution:
Increase in number of vehicles and industrialisation are the major contributors of air pollution. The gases like Carbon dioxide, Carbon monoxide, Sulphur dioxide etc. emitted from factories and motor vehicles and dust particles directly contributes air pollution. This is caused by over population.

2. Water Pollution:
Both population growth and urbanisation causes not only less availability of fresh water but also it is a cause for water pollution. Waste disposal from factories to water bodies due to large scale industrialisation pollutes water. Similarly, overuse of chemical fertilizers and pesticides in the agriculture sector also causes water pollution.

Ozone Depletion:
The protective covering of earth lies above 12 miles altitude from the surface of earth is called ozone layer. This layer protects the biosphere from harmful ultra violet radiation from the sun. The ozone depletion is mainly caused by high levels of atomic chlorine and atomic bromine found in the atmospheric layer.

The origin of these compounds are chlorofluro carbons. They are known as Freons. They are used in air conditioners, refrigerators, sprays, etc.

An agreement was signed at Montreal in Canada for the protection of ozone layer. This agreement discourage the use of CFC compounds which is harmful for the ozone layer.

Question 28.
Calculate the Arithmetic Mean, Median and Mode from the following data. 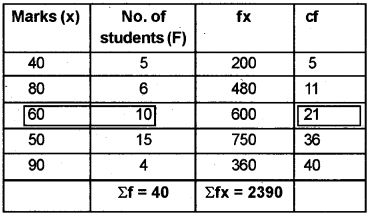 iii) Mode:
Here 15 is the highest frequency. The variable equivalent to the frequency is 50. So 50 is the mode.

Question 29.
Calculate the standard deviation and coefficient of variation from the following data. 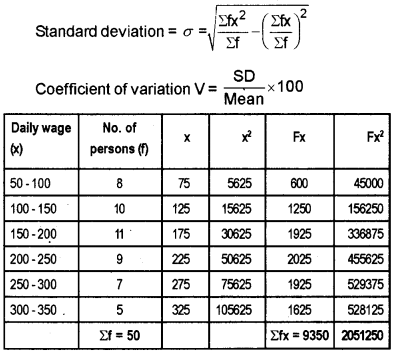 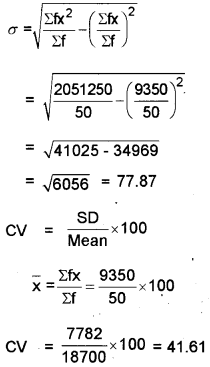 Plus One Economics Previous Year Question Papers and Answers