Question 1.
Name the keyword that indicates an empty set of data.
Answer:
void

Question 4.
In ………… network topology, each node is directly connected to a hub/switch.
Answer:
star topology

Question 5.
Name the character function used to accept a string including whitespace.
Answer:
gets() o rgetline()

Question 10.
What is meant by tokens? Name the tokens available in C++.
Answer:
Token: It is the smallest individual units similar to a word in English or Malayalam language. C++ has 5 tokens.
Keywords, Identifier, Literals (Constants), Punctuators and Operators.

Question 11.
What is the use of the keyword “Const”? Give an example.
Answer:
The keyword const is used to declare constants in a program. Its value doesn’t change during execution. Eg. const float pi = 3.1415

Question 12.
Illustrate the memory allocation for a single dimensional array in C++.
Answer:

Question 13.
Consider the following statements.
Char name [20];
Cin>>name;
Cout<<name;
What will be the output if you input the string “GREEN COMPUTING”? Justify your answer.
Answer:
The output is GREEN. This is because of cin statement that will take upto the space. Here space is the delimiter. To resolve this gets() function can be used. To use gets() and puts() function the header file cstdio must be included.

Question 14.
Correct the program and write the output.
#include<iostream>
using namespace std;
int main ()
{
int n = 25;
float b = sqrt (n);
cout<<b;
return 0;
}
Answer:
use mathematical built in function the header file cmath must be included.
#include<cmath>
The output is square root of 25 is 5

Question 15.
Write a short note on WiMAX.
Answer:
Wi MAX (Wireless Microwave Access): It uses microwaves to transmit information across a network in a range 2 GHz to 11 GHz over very long distance. 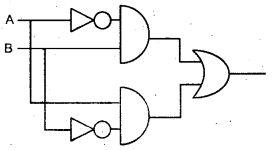 Question 20.
a) Program written in HLL is known as …………
b) What is the need of documentation for a program?
Answer:
a) Source Code

External Documentation: This includes preparation of system manual and user manual containing the functioning of the system, its requirements, installation, etc.

Question 21.
a) What is an algorithm?
b) Distinguish between logical error and syntax error in a program.
Answer:
a) Step by step procedure to solve a problem is called algorithm.

Question 22.
a) Arrange the fundamental data types in ascending order of their memory requirement. (1)
b) What is the use of size of operator in C++? Give an example. (2)
Answer:
a) char, int/float, double
b) size of( ): This operator is used to find the size used by each data type.
Eg. size of(int)gives 4

2) for statement
The syntax of for loop is
for(initialization; checking; update loop variable)
{
Body of loop;
}
First part, initialization is executed once, then checking is carried out if it is true the body of the for loop is executed. Then loop variable is updated and again checking is carried out this process continues until the checking becomes false. It is an entry controlled loop.

Question 26.
Distinguish between exit ( ) function and return statement.
Answer:
Both are used to terminate the program but both are different. Return is a keyword and exit(0) is a function.The difference is, we can use more than one exit(0) function but we can use only one return statement in a scope. To use exit(0), the header file cstdlib should be used.

Question 27.
a) Write the name of any two header files used in C++programs.
b) Write the role of header files in C++ programs.
Answer:
a) iostream, cstdio, cmath, cstring, etc
b) Header files help us to include the associate files that needed in our program.

b) Memory:
A computer has huge storage capacity. It is used to store data and instructions before starts the processing. Secondly it stores the intermediate results and thirdly it stores information(processed data), that is the final results before send to the output unit(Visual Display Unit, Printer, etc)

Two Types of storage unit:
i) Primary Storage alias Main Memory: It is further be classified into Two – Random Access Memory (RAM) and Read Only Memory (ROM). The one and only memory that the CPU can directly access is the main memory at a very high speed. It is expensive hence storage capacity is less.

RAM is volatile (when the power is switched off the content will be erased) in nature but ROM is non-volatile,(It is permanent). In ROM a “boot up” program called BIOS (Basic Input Output System) is stored to “boots up” the computer when it switched on. Some ROMs are given below.

ii) Secondary Storage alias Auxiliary Memory: Because of limited storage capacity of primary memory its need arises. When a user saves a file, it will be stored in this memory hence it is permanent in nature and its capacity is huge. Eg: Hard Disc Drive (HDD), Compact Disc (CD), DVD, Pen Drive, Blu Ray Disc etc.
i) Magnetic storage device: It uses plastic tape or metal/plastic discs coated with magnetic material.

ii) Optical storage device.
Optical Disk: The high power laser uses a concentrated, narrow beam of light, which is focuses and directed with lenses, prisms and mirrors for recording data. This beams burns very very small spots in master disk, which is used for making molds and these molds are used for making copies on plastic disks. A thin layer of aluminium followed by a transparent plastic layer is deposited on it. The holes made by the laser beam are called pits, interpreted as bit 0 and unburned areas are called lands interpreted as bit 1. Lower power laser beam is used to retrieve the data.

Question 30.
a) What is peer-to-peer network?
b) Specify the type of network given below.
ATM network, Cable television network, Network within the school. Network at home using bluetooth, Telephone network, Railway network.
Answer:
a) Peer to peer: in this configuration all the computers have equal priority. That means each computer can function as both a client and a server. There is no dedicated server.

Plus One Computer Science Previous Year Question Papers and Answers