Kerala Plus One Botany Improvement Question Paper Say 2018 with Answers

Question 1.
Fill in the blank.
Small disc-shaped structures at the surface of the centromere are called …………
Answer:
Kinetochore

Question 3.
Which one of the following features are applicable to bacteriophages?
a) They are bacterial viruses.
b) They have double stranded DNA as genetic material.
c) The protein coat is called capsid.
i) a and b  iii) b and c
iii) a and c  iv) All of these
Answer:
iv) All of these

Question 4.
Choose the CORRECT answer.
All tissues on the inner side of the endodermis together constitute.
a) Conjunctive tissue
b) Stele
c) Pericycle
d) Vascular bundle
Answer:
b) Stele

Question 5.
The following figures A and B shows two different types of phyllotaxy.

Question 6.
Observe the given stage of mitosis

Identify the stage and write any two features of it.
Answer:
Telophase

Question 8.
Match the items of column A with column B 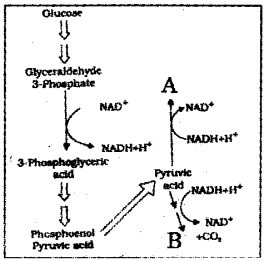 Identify the products A and B. Give an example of organism in which any of these products are formed.
Answer:
A – lactic acid
B – ethanol

Question 10.
Observe the T. Sofa plant part given below. 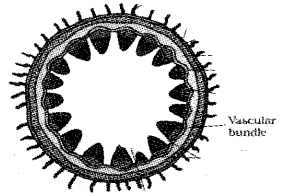 Identify the plant part and explain any two features of its vascular bundles.
Answer:
Dicot stem

Question 12.
Observe the figure given below. 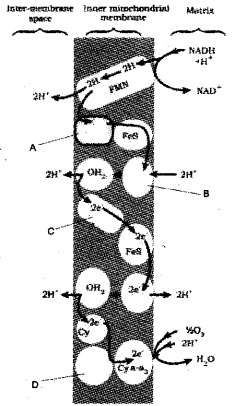 Fill in the blanks A, B, C and D with appropriate terms from the box given below.

Question 14.
The nucleoplasm contains small spherical shaped structures.
a) Name the structures
b) Name the openings seen in nuclear envelope and state their function.
Answer:
a) Nucleolus
b) Nuclear pores
It act as passage for the movement of RNA and proteins

Question 15.
There are certain seeds which fails to germinate even under favourable external conditions. This is called seed dormancy.
a) State any two reasons for seed dormancy.
b) Suggest two man made measures for breaking seed dormancy
Answer:
a) Seed dormancy occurs,