Our nation, India, has various languages, cultures, castes, religions, and geographical differences. However, apart from these, there lies a feeling of oneness and unity among the people. This creates National Unity in a nation.

As the birds live together like one big family, humans should become that united leaving behind their social differences or history. Our nation should belong to this idea of togetherness.

The National Integration Council (NIC) was formed under the guidance of Prime Minister Jawaharlal Nehru in the year 1961. The council’s purpose was to pave the way to counter problems that hindered the growth of national unity. 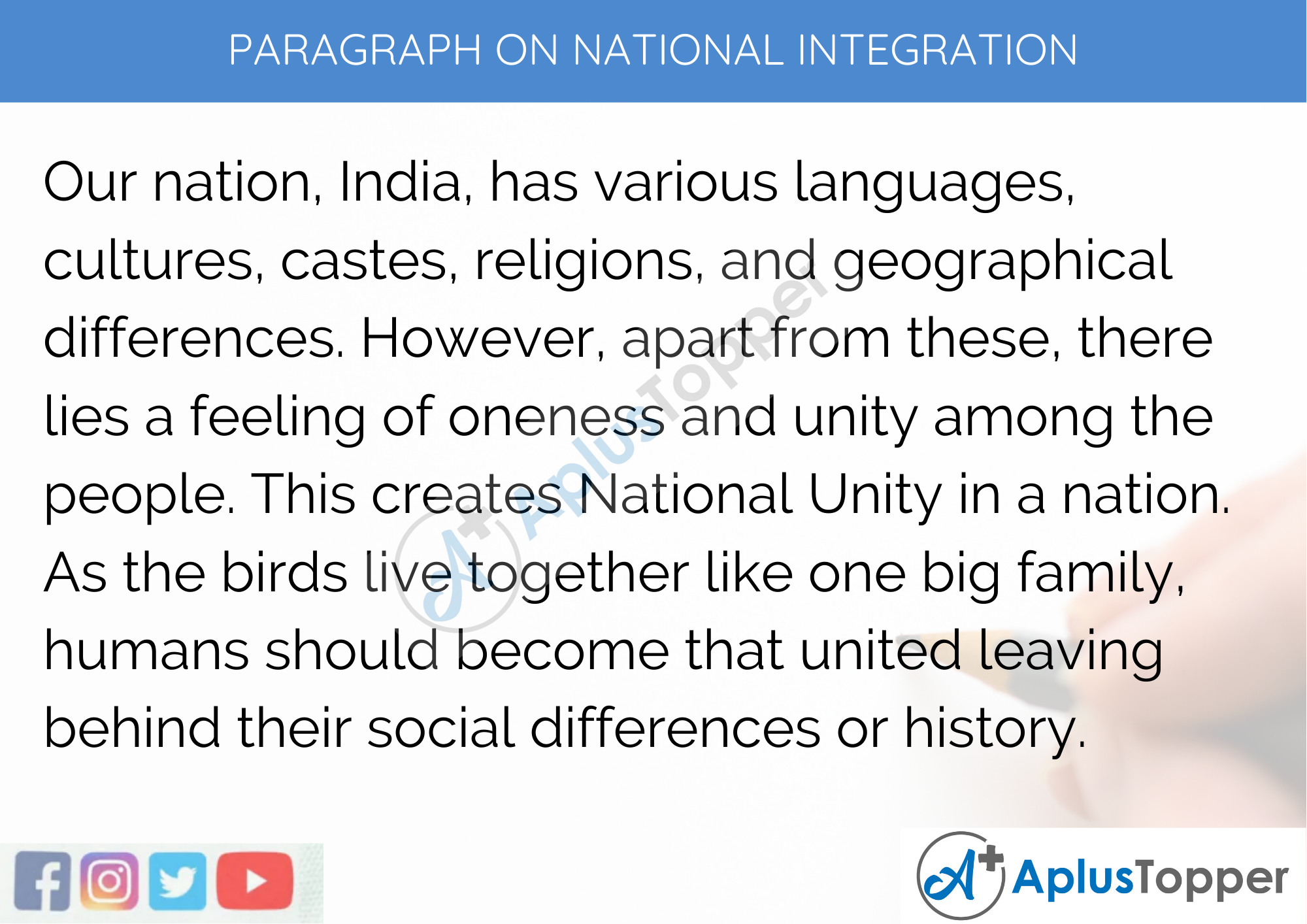 National unity is the feeling of togetherness among the citizens of the country. The idea of national integration has been constantly promoted since our independence. The leaders were well aware of the threats to this unity and consequently took the necessary measures to safeguard it in our Constitution.

This was ensured by implementing several ideals like Democracy, Secularism, and Social Equality. It is why the Constitution becomes one of the key forces behind the promotion of national integration.

The importance of ideals like national integration is of great value in developing countries like India. It can be a catalyst in removing the problems of the ancient Hindu conservative society. Political integration can also be achieved in the process, which would help the masses.

With time and the spread of education, this is no longer an impossible task to achieve. However, every individual should contribute their bit to the society to bring about this massive change.

National Integration has always been the force behind the idea of being a secular state. This implies that every citizen of our country has the fundamental right to freely practice his/ her religion. The Government or anyone, for that matter, cannot show any preference to one religion at the expense of another.

Coming to democracy, under this ideal, all the citizens of India are equal in the eyes of the law. Thus, the idea of national integration paves the way for the basic ideas mentioned in our Constitution.

However, it is not new that there have been many instances where people have been hostile towards a particular group, language, religion, culture, or beliefs. This again causes harm to the hard built national unity of the country.

Casteism also appears to be a great concern in the Indian sub-continent. People belonging to one particular caste are supportive of each other and oppose the progress of the other lower castes. Thus, in the appointment of jobs and educational institutions, caste is a primary field required to be mentioned.

The Government takes small measures to ensure safety and give equal privileges to the needy ensuring national integration; however, we as responsible citizens must also give due respect and realize the greatness of unity in diversity.

India is a country consisting of people from different backgrounds, mixed cultures, and various religious practices. It brings in a harmony of varied diversities together in its land, so it would be a great feeling if India could properly implement the idea of National Integration.

In the past, there has been a poor national integration which the history remembers until now. Thus, after independence, several measures were undertaken by the Jawaharlal Nehru Government to implement the idea of National Integration, by setting up the National Integration Council in 1961.

The population of India has a huge variety of people who live together but have contradicting opinions. In such a case, national disintegration and disunity may become common and evil to society. It would destroy the harmonious image of the nation. People might suffer from indignities and humiliations from the lack of Integrity. This disintegration could be the main cause of several national crises and the partition of the country.

There were several instances where we can find the lack of national unity resulting in the demise of a special power such as the Mughals attack in India, where there was no unity between the Rajputs. These incidents are past now and remain confined to the pages.

Now India is a free county, and unity must be restored. It should culminate in the minds of the people that we belong to one nation, and we must be together to move forward as a strong independent nation. 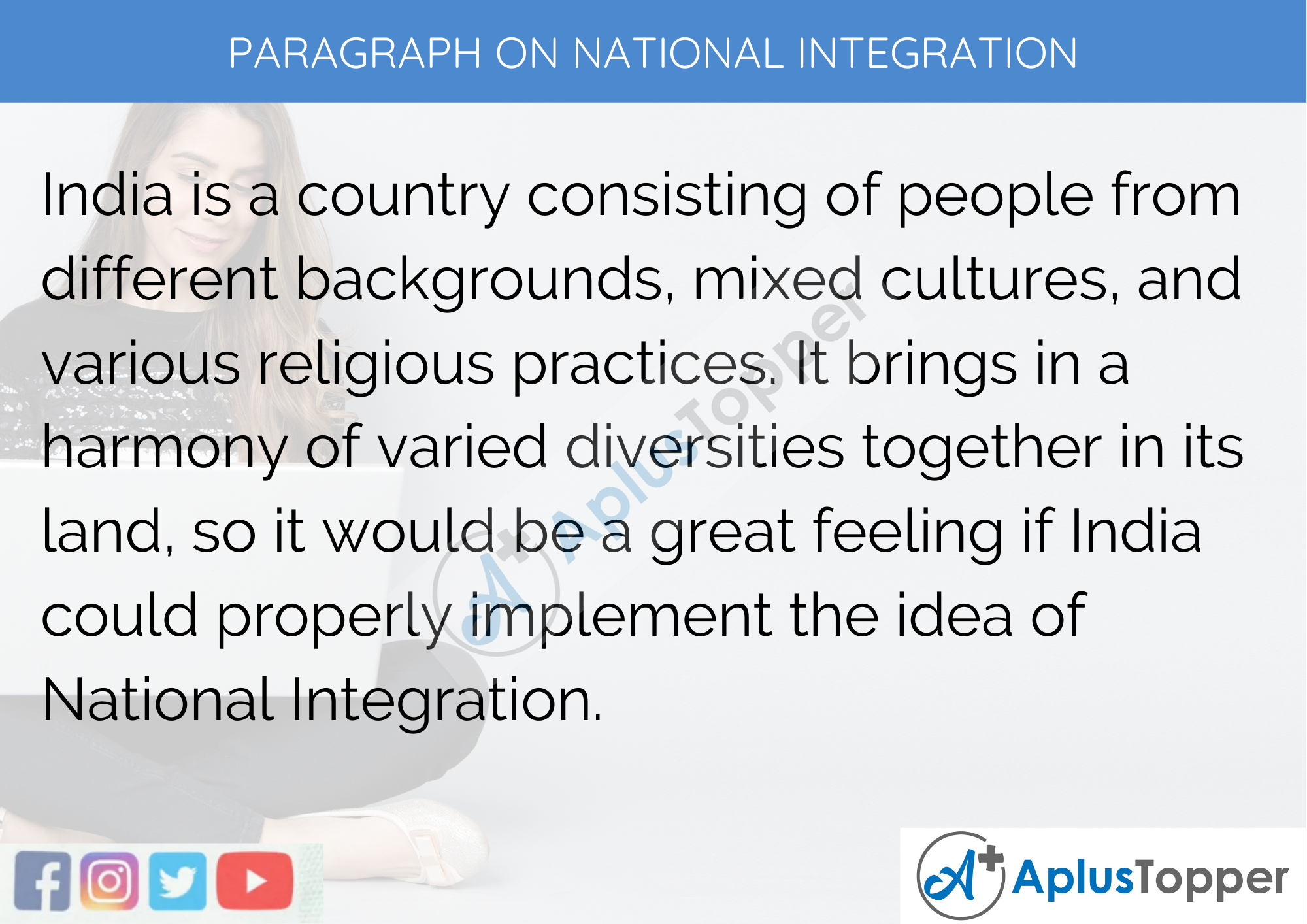 FAQ’s on Paragraph on National Integration

Question 1.
What does National Integration include?

Answer:
National Integration is a feeling of unity and togetherness among the citizens of a particular nation.

Question 2.
Why is National Integration necessary?

Answer:
National Integration is necessary for a country because it helps to stabilize democracy, increases economic growth, and gives vital rights and duties to the people. It is very crucial, especially for developing countries like India.

Answer:
The Prime Minister of India in powerheads the National Integration Council in India.

Question 4.
What is the aim of National integration?

Answer:
The aim of national Integration is to bring people of different caste, creed, and religion under one roof and establish harmony.