Paragraph On Hindi Diwas: Hindi Diwas falls on the 14th of September. It is an annual day and dedicated to the mother tongue, Hindi. On the eve of it, Hindi was adopted as the official language. Thus, Hindi Diwas is celebrated all over the country.

The Hindi language is spoken as a Native language by almost 250 billion people. Also, it is recognized as the fourth most spoken language in the world. Now, check out the paragraphs on Hindi Diwas in this article.

Hindi Diwas is observed on the 14th of September every year. It is celebrated in many colleges, schools, government institutions, and also other places in different parts of India. Initially, the year 1953, Hindi Diwas was observed. After that, it is being celebrated every year by everyone with zeal and fun.

Many cultural activities are organized to celebrate it. Also, many innovative and creative activities will be performed on this day. All these events are one of the ways to show respect to the Hindi language. It is deeply rooted in Indian culture and tradition. Also, it is a reminder that no matter wherever an individual goes in life, he/she must value and respect the language culture. Hindi Diwas is celebrated mostly in the Hindi speaking areas of India. It is to promote the national language all over the country. Hindi falls on the 14th of September every year. Hindi was written in Devnagari lipi. It was a great moment for every India and that day calls for a celebration. Thus, it is celebrated with great zeal each year all over the nation. One of the main events that are organized on the eve of Hindi Diwas is Samaroh.

Many cultural activities are organized all over India on the eve of Hindi Diwas. People gather around to praise the Hindi language by delivering speeches. Hindi poetry recitation events are organized to celebrate Hindi Diwas. Also, it is celebrated in schools, colleges, and offices. Cultural programs are also conducted, and teachers give speeches to highlight the importance of the Hindi language.

After the Indian Independence, states spoke a lot of different languages. Everyone in the country aimed to have a common language. Thus, the communication will be easy all over the country. Hindi is the official communication language for the central government along with the English language.

On the eve of Hindi Diwas, pets, writers and many enthusiasts celebrate by conducting events and cultural activities. Everyone remembers the famous exponents of the language. Devnagari lipi is the one promoted most with the Hindi language. Many competitions for children are conducted at school and college levels. Celebrations and events are needed to encourage our languages. Some of the events held are essay writing, poetry, jokes, and funny narrations. TV channels, magazines, newspapers, and social media organize competitions. People exhibit their innovative ideas in their literary works.

Hindi Diwas is observed each year to highlight the importance of Hindi language. It is the way of reminding the present generations about their roots. Each year, the 14th of September remains every Indian of true identity and unites everyone with the people of the country. No matter wherever one goes, language, values, and culture must stay intact. It is one such day that instils everyone with patriotic feelings.

At present, there is an inclination towards the English language. It is understood as it is used all over the world and is one of the official languages of India. The adoption of Hindi as an official language proves that everyone respects their roots. Also, they want every one of their country to value them. 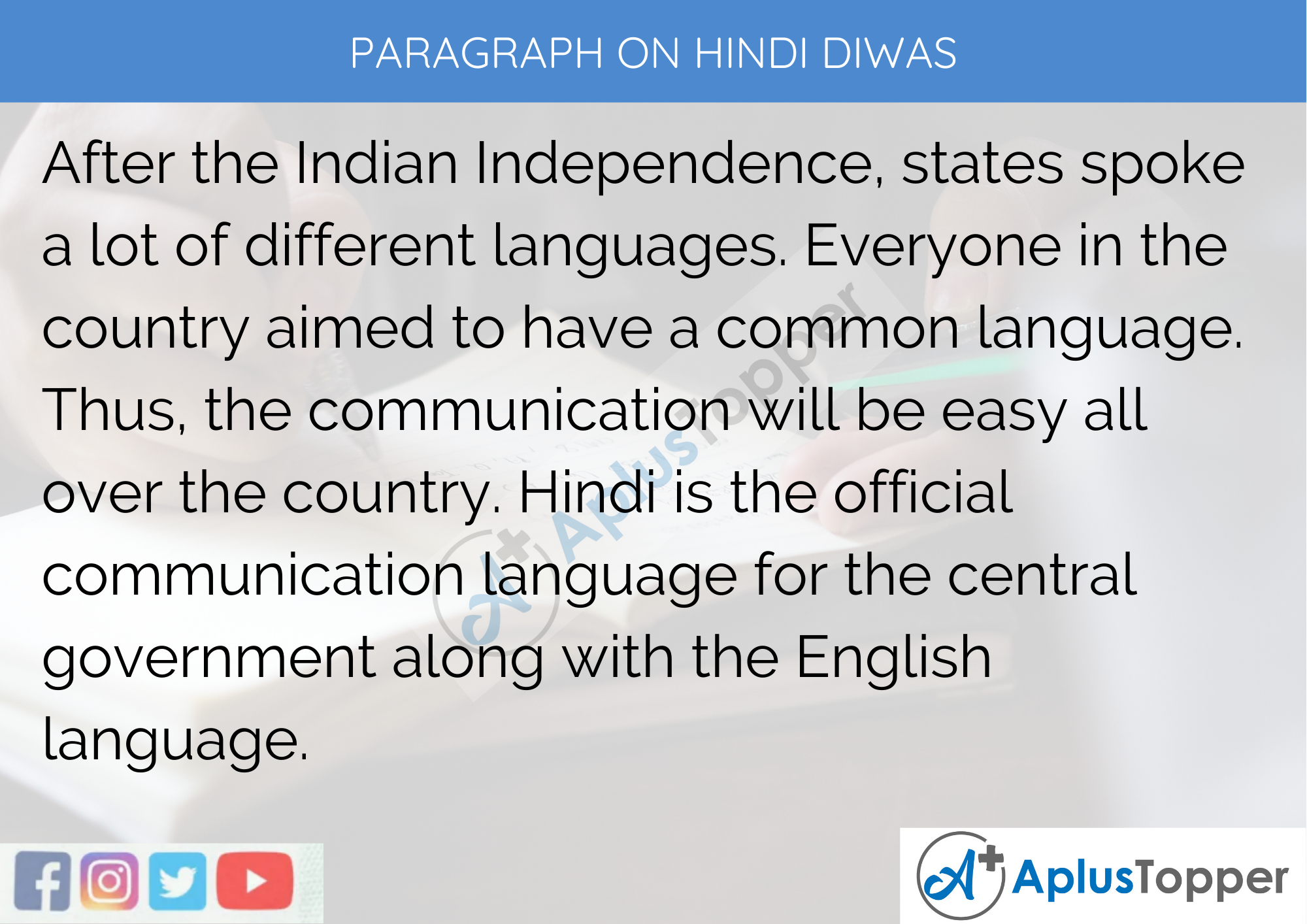 FAQ’s on Paragraph on Hindi Diwas

Question 1.
Why is Hindi Diwas observed on the 14th of September?

Answer:
The Indian government set an aim to offer an idealized look to the mother tongue of the country. It set a goal of orthography and grammar using the Devanagiri lipi to get about standardization in writing. After that, on the 14th of September, 1949, the constitution decided that the Hindi language will be the official language. On the request of Rashtrabasha Prachar Samiti held on the 14th of September 1953. Thus, India is celebrating Hindi Diwas every year on that day. The main aim is to spread the importance of Hindi language in every region of India.

Question 2.
What is the primary theme of celebrating the Hindi Diwas?

Answer:
The main theme of celebrating Hindi Diwas is to promote the importance and usage of Hindi language all over the world.

Question 3.
Why is Hindi famous?

Answer:
Hindi is spoken by about 40 per cent of the Indian population. Also, it is the primary medium of communication in different states.