Deforestation involves large scale clearing up of land to generate space for the projects of producers. Even government projects may require clearing up of forests. Deforestation has adverse effects on the environment. It reduces the fertility of the soil. The fertility of the soil is reduced due to soil erosion. Trees protect us from the scorching heat of the Sun by providing shade and shelter. Trees also produced oxygen and take in carbon dioxide during the process of photosynthesis. It can lead to several problems if deforestation is not checked. A flood can become uncontrollable, and rainfall may become scanty. Protecting trees should be the foremost concern of governments. 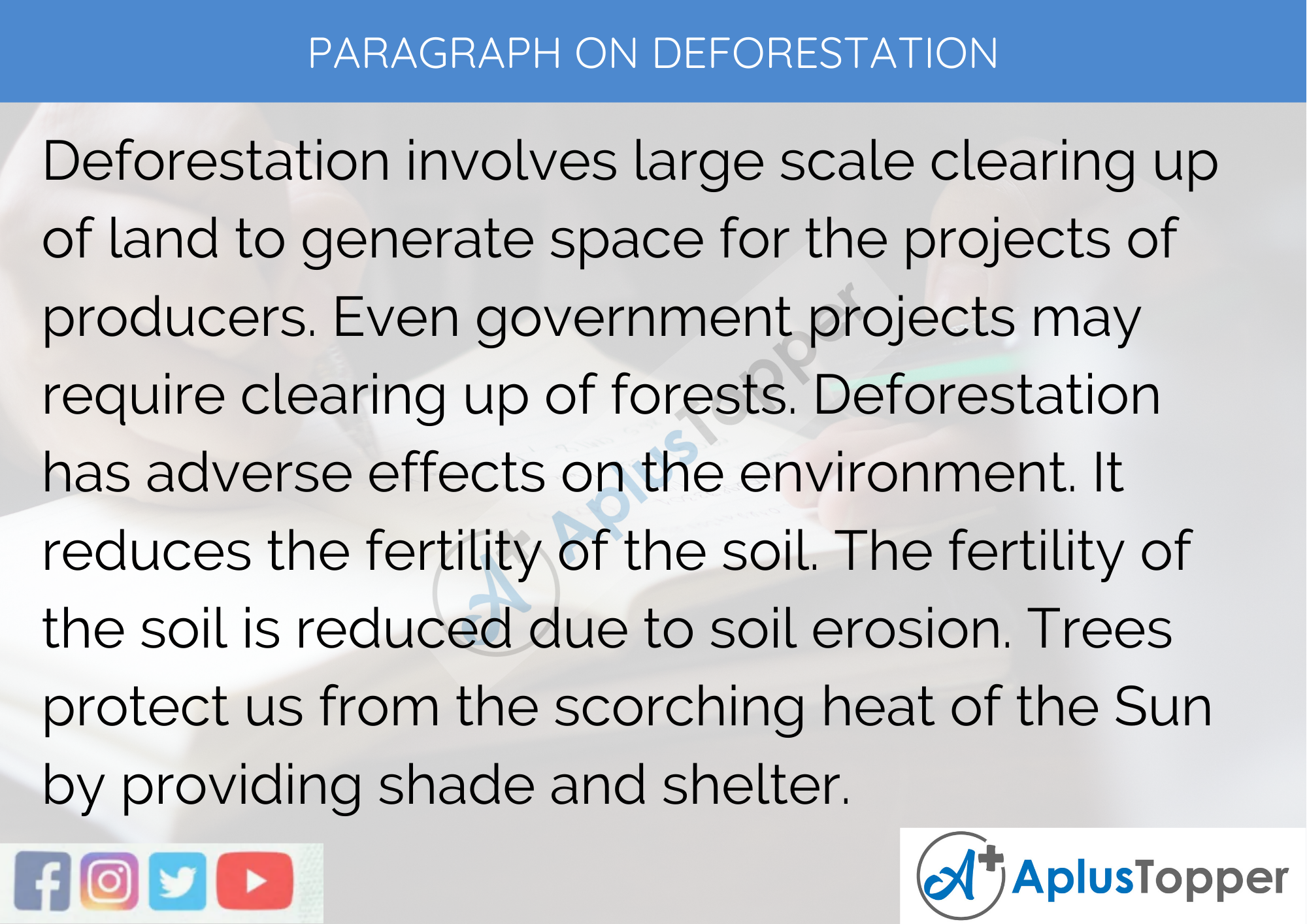 We live in a country where the temperatures are comparatively higher. In these tropical countries, the tree plays a significant role in bringing rainfall. Trees take care of the water cycle. They initiate precipitation and cloud formation. Trees can also be beneficial in case of flood protection. The mangrove of Sundarbans protects the area from devastating floods. Flood still occurs in these areas regularly, but the impact is controlled due to the mangroves. If we keep cutting den trees haphazardly and randomly, the soil structure will see massive changes. Soil erosion is an authentic problem. It degrades the quality of soil that is being used by the farmers for agriculture. Trees provide fresh oxygen to the people. Trees are also the shelter for various birds and animals. Most nocturnal birds and migratory birds find their homes in the trees. The effects of deforestation have made millions of birds, close their habitat.

In this paragraph, we will focus on the harmful effects of deforestation. The effects of deforestation can be jotted down. The first effect of deforestation is the degradation of soil quality. Degradation of soil quality is triggered by the removal of the topsoil layer. The trees hold on to the topsoil with their roots. The roots are used to derive nutrients from the soil. When deforestation occurs, the trees are either cut down or uprooted. The former leads to soil loosening and the later causes the roots to decay. Decaying roots increase the number of alkaline salts in the soil, making them unfit for agriculture.

So deforestation has adverse effects on agriculture. The reduction of trees also several effects on the air quality of a place. Trees release oxygen during photosynthesis. The release of oxygen causes air quality to remain standard. The cutting down of trees impurifies the air. The natural filters are gone. The pollution levels increase. Carbon monoxide emissions cannot be curbed as the number of vehicles increase. The trees also can’t protect the air from getting polluted. So the rampant deforestation also causes Air Pollution. In addition to Air pollution, deforestation causes soil erosion and degradation of soil quality. Deforestation must, hence, be curbed.

This paragraph will provide a formal introduction on how wildlife is affected due to deforestation. We will also discuss the methods in which the various governments are trying to dampen the effects of deforestation. We are all aware of the serious of wildfires have been taking place all over the earth. These wildfires are mostly surviving for days and weeks.

The sudden rise in temperatures happening across the world has led to such a situation. The entire planet is heating up due to global warming. The reason for global warming is rampant deforestation. The deformation paves the path for industrialization. As the number of factories increase, the trees decrease. Brazil has been holding a very lacklustre stance in case of deforestation. A considerable part of the Amazon rainforests has been cleared. Several wildlife species lost their habitat and lives. Birds have also lost their homes.

The effects of deforestation are far-reaching. In has plunged the entire world into a severe crisis for clean energy resources. Clean Energy is the need of the hour. With the severe deforestation that has taken place, a clean energy alternative is necessary. The outcome of deforestation has been the depletion of the Ozone Layer. It shields us from the harmful UV rays of the Sun. India has initiated strict measures around the country with regards to afforestation. The Chipko Movement was a milestone in the realm of environmental awareness. It was begun by several women who hugged trees to deforestation. Afforestation has been done in several parts of the country. 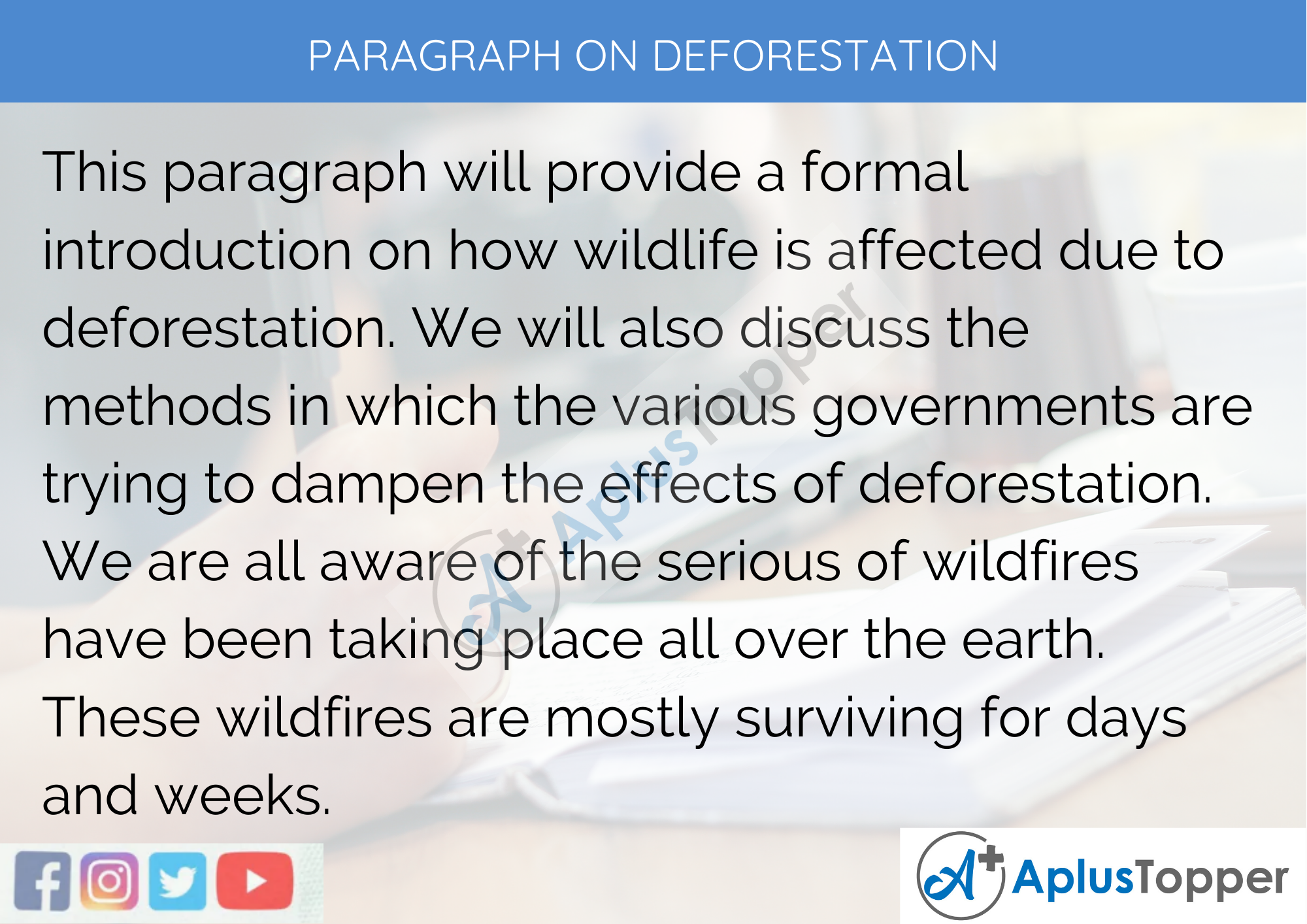 FAQ’s on Paragraph on Deforestation

Question 1.
What is deforestation?

Answer:
Deforestation is the cutting down of trees. It is done to increase the pace to build house, roads, factories and other infrastructure.

Question 2.
What is the opposite of deforestation?

Question 3.
What are the problems caused by deforestation?

Question 4.
Is global warming a direct effect of deforestation?

Answer:
Yes. Global warming is a direct effect of deforestation. forest cover has reduced massively over the past years. It has caused the world temperatures to soar. The climate changes are adverse, and seasons are delayed. Global warming cause increase of greenhouse gases in the environment, causing a rise in temperatures.