Nipah Virus Essay: Nipah virus, scientifically known as Nipah henipavirus, is a bat-borne disease that causes Nipah virus infection in humans and other animals, a disease with a high mortality rate.

The spread of the virus normally requires direct contact with an infected source. It generally spreads between people and from other animals to people. The diagnosis of the Nipah virus is based on symptoms and confirmed by laboratory testing.

The World Health Organization, in recent researches, says that Nipah Virus infection is a zoonotic illness that is transmitted through contaminated food or directly from person to person. A person with contamination and infection starts causing a range of illnesses from asymptomatic infection to fatal encephalitis and acute respiratory illness. Severe disease in animals can be caused by the virus, resulting in significant economic losses for farmers.

Nipah virus has resulted in a few outbursts in Asia; it infected humans and a wide range of animals and caused many diseases and deaths. The first recognized outbreak in Malaysia also affected Singapore. Most humans were infected from direct contact with sick pigs or their contaminated tissues. The transmission occurred either by non-protected exposure to secretions from the pigs or via unprotected contact with a sick animal’s tissue.

In outbreaks in Bangladesh and India, the primary cause of the virus’s spread was the usage of fruits and fruit products such as raw date palm juice contaminated with urine or saliva from infected bats. Human to human spread of Nipah Virus has also been found among the family, relatives, and caregivers of patients infected with the virus.

The disease was first coming to light in 1998 by a team of researchers at the Faculty of Medicine, the University of Malaysia, during the outburst. Most of the patients contaminated with the virus in Malaysia were referred to and treated at the University of Malaysia Medical Center. The virus was isolated and identified in the year 1999. Nipah virus was labeled after a village in Malaysia, Sungai Nipah.

Management is restricted to essential care; as of 2020, there has been neither vaccine nor specific virus treatment. The interim measure includes dodging exposure to bats and sick pigs and also avoiding usage of raw date palm sap. By the end of May 2018, about 650 human cases of Nipah virus were calculated to have taken place, and 45 to 70 percent of those infected did not survive. An outburst of the disease caused 18 deaths in the Indian state of Kerala also.

The symptoms start to show up between 6 to 15 days after getting contaminated with the virus. Initial indications are fever, headache, drowsiness followed by disorientation and mental confusion. Breathing issues might also be present during the initial stages. Coma may ensue within a timestamp of two days.

Nipah patients who have problems related to the lungs and their respiratory system are more likely than those without breathing difficulties to spread the virus, as are those individuals who are more than 45 years of age. The disease is speculated in symptomatic individuals in the circumstances of an epidemic outbreak. The risk of catching the Nipah virus is high for hospital workers and caretakers of those infected with the virus. 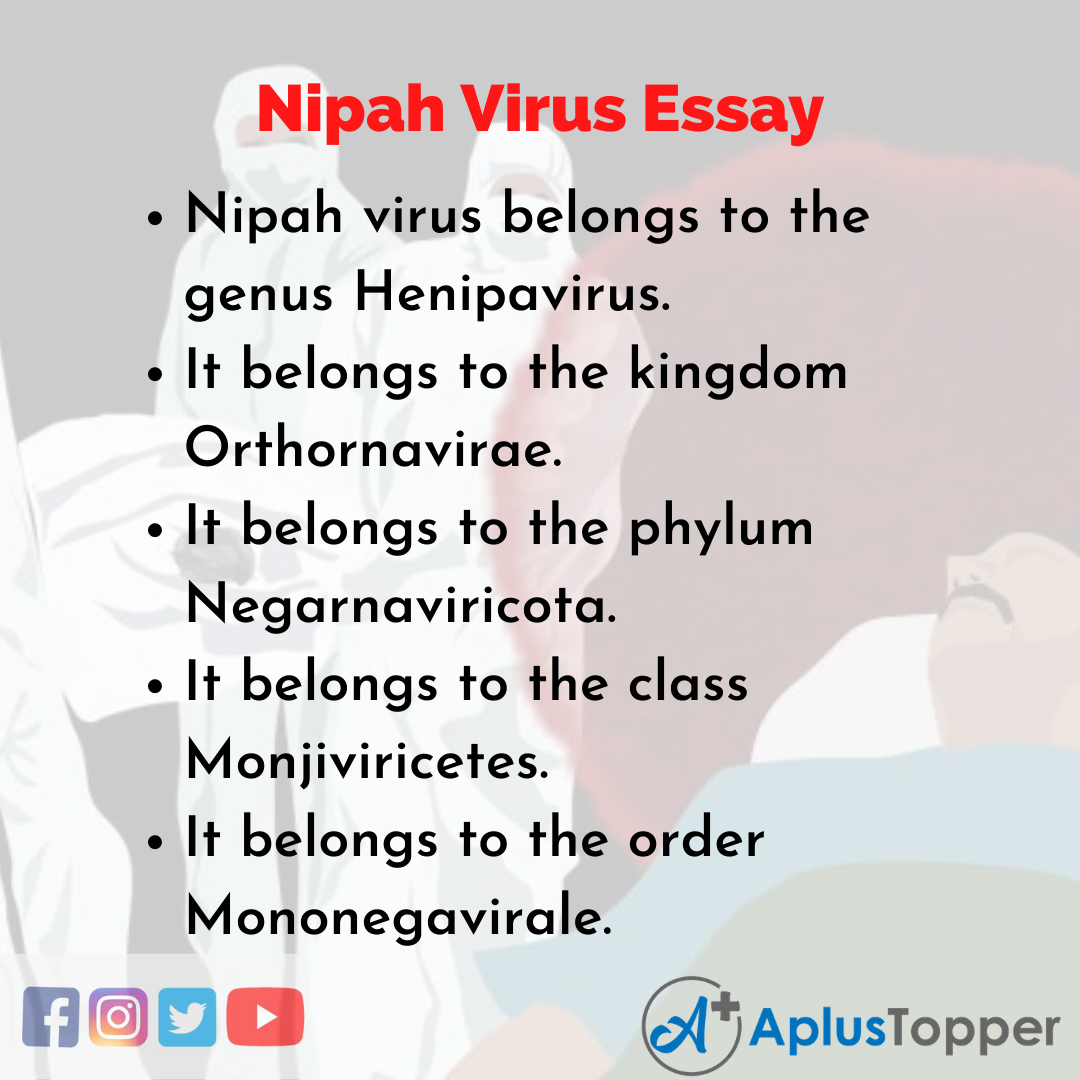 A Nipah Virus causes a viral infection called the Nipah virus infection. This is a type of RNA virus in the genus Henipavirus. The virus is generally circulated among specific types of fruit bats. It can spread both between people and from other animals to people. Spreading of the virus typically requires direct contact with an infected source. WHO identified the Nipah virus as a future epidemic in a new plan developed after the Ebola epidemic for urgent research and development before and during an epidemic toward new diagnostic tests, vaccines, and medicines.

The transmission of the Nipah virus from flying foxes to pigs took place due to an increasing overlap between bat habitats and piggeries in the regions where the outbreaks took place. At the index farm, fruit orchards were close to the piggery, allowing the spillage of urine, feces, and fruits partially eaten by the pigs.

10 Lines on Nipah Virus in English Question 1.
Is the Nipah virus curable?

Answer:
There is no particular treatment for the Nipah virus. The primary measures for infected human cases are intensive supportive care.

Question 2.
What are the symptoms of the Nipah virus?

Answer:
Infection with the Nipah virus is associated with encephalitis. After exposure of 5 to 14 days, illness presents with fever and headache.

Question 3.
Where is the Nipah virus found?

Answer:
Nipah virus outbreaks have been found in Malaysia, Singapore, Bangladesh, and India.

Answer:
it is transmitted either from human to human or from animals, such as bats or pigs to humans.