New Years eve Vocabulary: New Year wishes to all our readers. The last day of the Year is filled with fun engaging in social gatherings, parties, drinking, and more. The celebration continues till the next day: the New Year. Celebrating a new year with your English-speaking friends will require you to know certain words for better communication. A simple New Year vocabulary will help you have better conversations and fun.

To help you have a wonderful experience, we have a list of New Year vocabulary words you will need to have a great new year ahead filled with joy and happiness.

The vocabulary words for the list of things around the New Year are pretty long. However, if told to use one word for New Year, we would be lost, so we must use some words to maintain the tradition. So celebrating this time of the year should be with the New Year vocabulary of words.

This article will assist you to know about words to describe a new year owing to your great celebration. 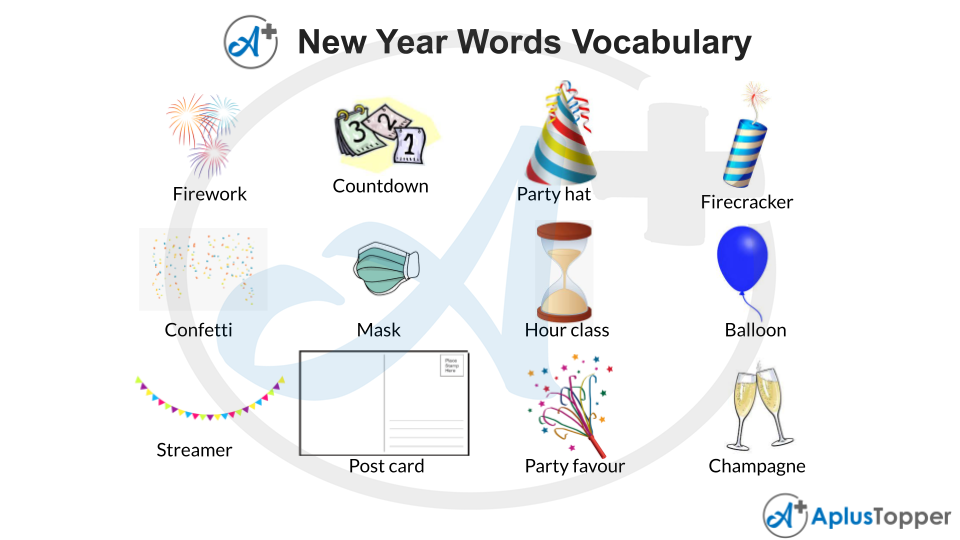 Using fireworks during the New Year is believed to come from ancient times when noise and fire were brought together and believed to destroy evil spirits and bring good luck. Fireworks are done during midnight to welcome New Year with noise and light. It is the most spectacular event witnessed at midnight.

A new calendar is formed during New Year starting, which is followed for the next whole year. In ancient times New Year’s began from different dates for different regions, now also it is observed. Thus, January 1 is now officially the start of a new year throughout the world.

The first day of a New Year is called New Year’s Day. Most people enjoy this holiday as it is a nationally declared holiday. However, people who drank alcohol last day may have a hangover or spend time with loved ones.

During the New Year, people like to drink alcohol of their choice to celebrate a great year ahead. Champagne in ancient times was identified as wine for the elite, a symbol of status, and was also a drink of choice for Louis XIV. Opening champagne bottles and toasting glasses is still a New Year tradition around the world.

Parties during the New Year are filled with colorful items; to make it more lively decorative items like balloons of different colors and patterns are used. It is tied in various forms and placed at parties or houses for social gatherings.

The countdown is the time counting until New Year arrives. Count down during New Year is by hours, minutes, or seconds. But as a ritual, the New Year countdown is done for the last ten seconds.

New Year is welcomed by concerts or programs of singing and dancing in many places. The gathering of many people here shows the excitement of New Year. Dance is also done with partners to show affection.

There are realities of games played during a social gathering of family and friends like resolution and lie, loaded questions, etc. But, it is a symbol of New Year’s spirit and enjoyment.

People gather at public places, fairs, concerts in the evening to start the celebrations. Streets are filled with light and street foods. The evening is the busiest of New Year’s eve remarks at the beginning of the Year.

A group of people, mainly close friends, the family brought together to celebrate. New Year events are filled with social gatherings to spend quality time. Communities can be at parties, concerts, shows, or any other public or private place.

Written or spoken request to come for parties or gatherings to celebrate New Year with food, wine games, and more.

Midnight is the time of hitting twelve highlights at the beginning of the New Year. The midnight is filled with fireworks, tossing glasses, party bumps, and more.

Party is a social gathering for people filled with food, drinking, and games. During New, Year party can be held at home or clubs across. It generally requires pre invites or bookings during days like New Year.

The time from Christmas till New Year is a declared holiday at any place. People may choose to spend their New Year holiday at home with friends and family or go for vacations to start the Year afresh.

Party hats are worn in the new Year to resemble colors and joy. Children like to wear party hats and enjoy around during this time of the Year.

Making New Year’s resolutions has been an entire trend for some time. It is a tradition followed in western and eastern countries where a person oaths to change habits or practices towards a positive attitude for the Year. Ironically the New Year resolution does not last long.

An hourglass symbolizes the passage of time. For example, an hourglass shows the time of a new years eve to New Year, a cycle from December to Monday, which comes every year, meaning that time never stops.

Auld Lang Syne is a poem sung to bid farewell to thaw year popular I western culture. This song is popularly recognized as the New Year’s song.

This gathering remarks an important event, starting of New Year is celebrated by bursting firecrackers. People throughout the world enjoy the holiday and enjoy good food and a good time.

We can notice a New Year parade at different places in the world. The train includes people marching, dancing, and shows or events to welcome the New Year. It is one of the most extravaganza events of the day.

Parties with themes generally have a ritual of wearing masks. For example, new Year brings back mask parties to keep the identity anonymous and enjoy the welcoming of a year.

Dinner is hosted at many places, these act as social gatherings but are very homely. Dinner invitations are hot and have good food and wine with friends and family.