Natural World Vocabulary: There are different meanings of nature. It describes anything that comes from nature. In other words, we can say that it is not man-made. Learn the List of Natural world Vocabulary in English with pictures from here. This article teaches you many English words regarding Natural World. This will improvise your communication skills. It also helps you to know beautiful places on the earth. Some of the Names of Natural Disasters and nature words are Asteroid, Volcano eruption, Beach, waterfalls, Rainbow, Caves, Ocean, and so on.

A list of natural world vocabulary in English is shown below. 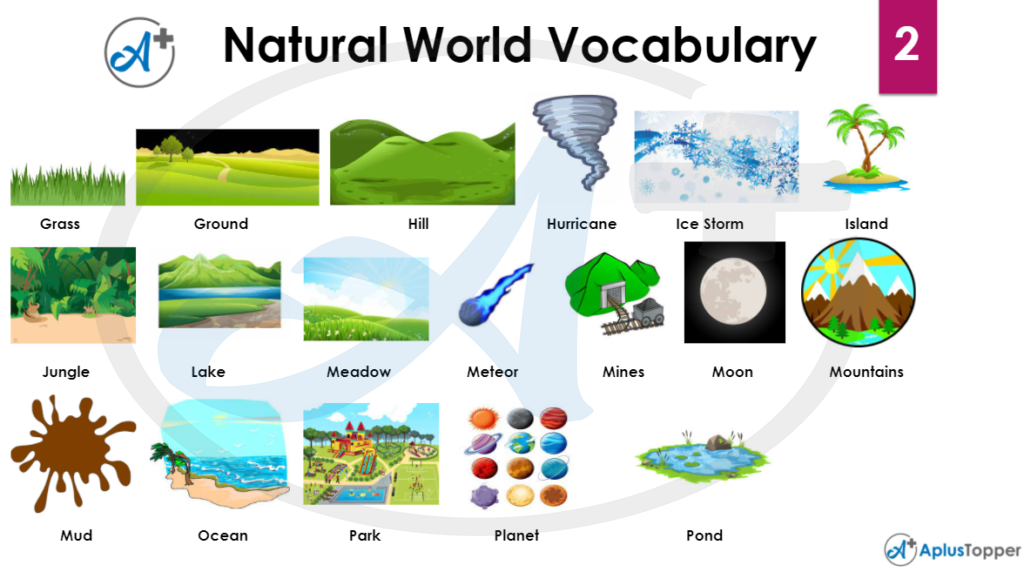 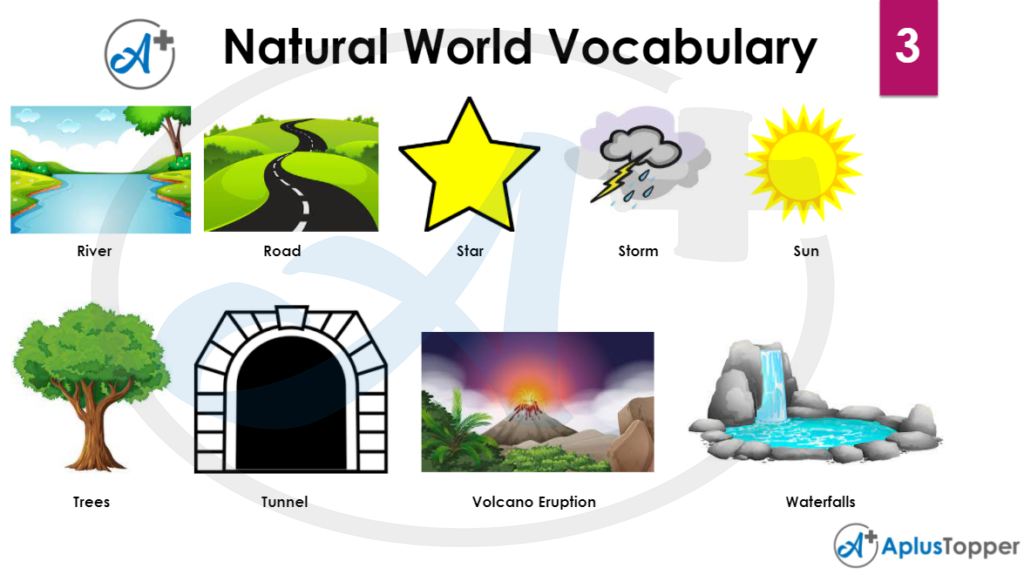 List of Natural Disasters and Weather Vocabulary with Images

An asteroid is a small rocky body orbiting the sun. An asteroid is a natural disaster that harms the natural world. Asteroids are actually minor planets that can neither be classified as planets nor comets.

Avalanche is a sudden arrival or occurrence of something in overwhelming quantities.

Beach is a land separating a body of water from the inland area. They lie along the edges of the ocean, lake, or river. The beach is covered with sand rocks and seashells.

A natural bridge is a type of arch where the natural force making the hole. A bridge is a medium that is used to cross the water or rocks etc. The bridge can be natural or artificial. 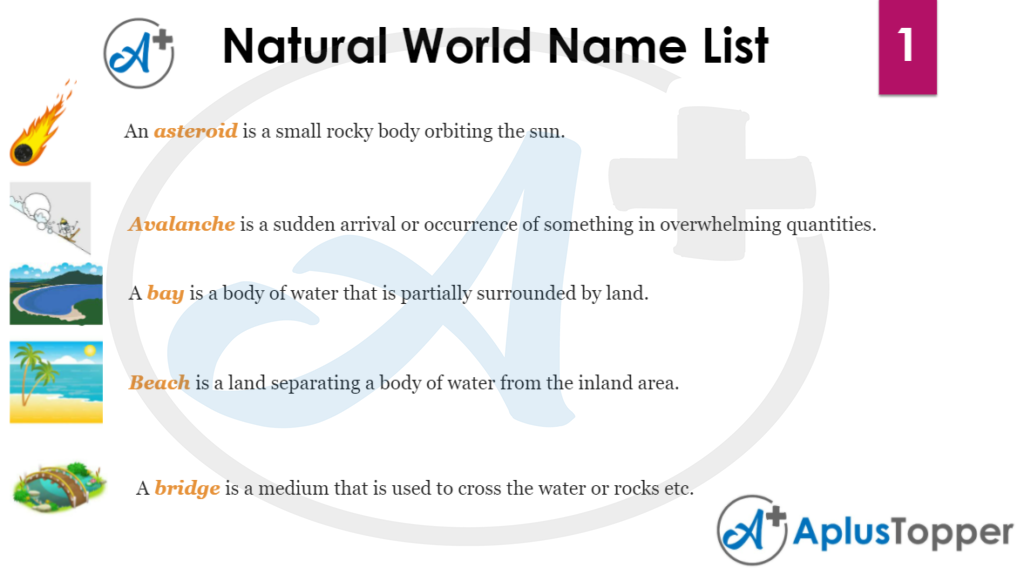 A Canyon is a deep cleft between escarpment or cliffs resulting from weathering and the erosive activity of a river over geologic time scales. The largest and most famous canyons have been formed by dry areas by swift streams fed by rain or melting snow from wetter areas.

A cave is a natural void in the ground. It has a space large enough that a human can enter into it. Visiting or exploring caves for recreation is called caving, potholing.

Cities are formed by humans. There is nature around the city and even in our homes. Also, we can consider that Nature exists far away from the cities.

Cliffs are very common landscape features. A cliff is a mass or area of rock that rises very high and almost vertical, straight up and down. Usually, cliffs are formed because of processes called erosion and weathering.

Clouds are water vapor in the sky. They are visible in different shapes and formations. The water evaporates and rises up into the sky. Coasts are natural ecosystems. The coast is also known as the coastline or seashore. It is the area where the land meets the ocean or as a line that forms the boundary between the land and the ocean or a lake.

Dams can be man-made, natural causes, or even by beavers. A dam is a structure built across a river or stream to hold the backwater. In simple words, we can say that dams are used to store water.

A desert is an extremely dry large area of land with sparse vegetation. Around one-third part of the Earth is covered by natural desert. A desert is a natural laboratory where you can study the interaction of wind.

A dune is a landform composed of wind or water-driven sand. Dunes are found wherever loose sand is windblown.

An earthquake is sudden ground movement caused by the sudden release of energy stored in rocks. It is the sudden movement of the Earth’s crust. 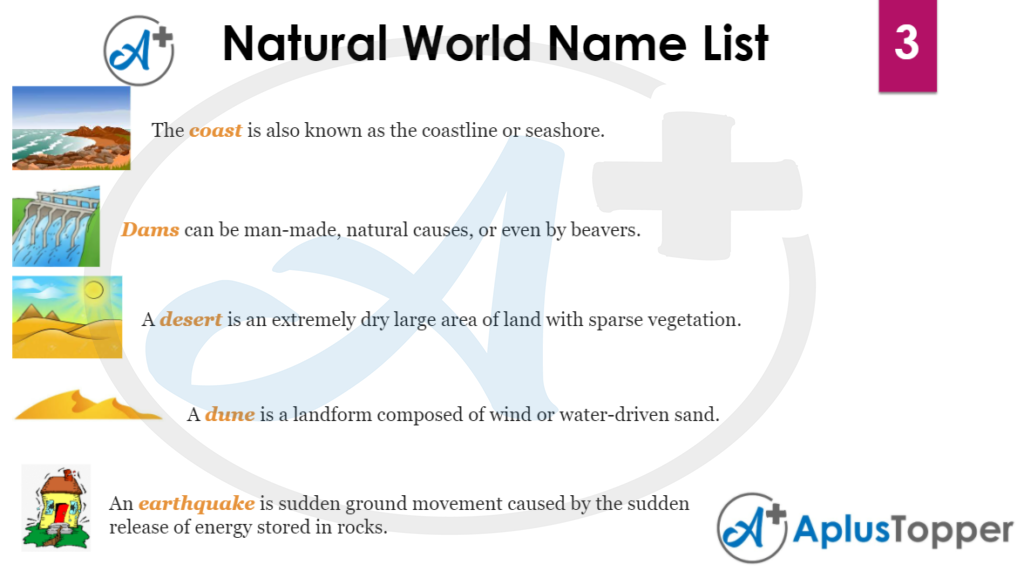 Farmland is also known as agricultural land. Farmed land may or may not be natural. Farmland is the land that is farmed or which is suitable for farming.

The field is an open area of land especially used for planting trees and for cropping. It is used for agricultural purposes and also for playing fields used for sports and games.

Floods mean the overflow of water onto land. It is a disaster. It is caused by heavy rainfall, rapid snowmelt. It damages personal property and health.

Flowers
The flower is a part of a plant that grows at the end of the stem. The flowers have different flowers. They only survive for less time. Flowers can feed insects to birds, animals, and humans.

Forest means a large area covered with trees. We depend on forests for our survival. They include plants and animals and it is an ecosystem. Temperature and rainfall are the two most important things for a forest. 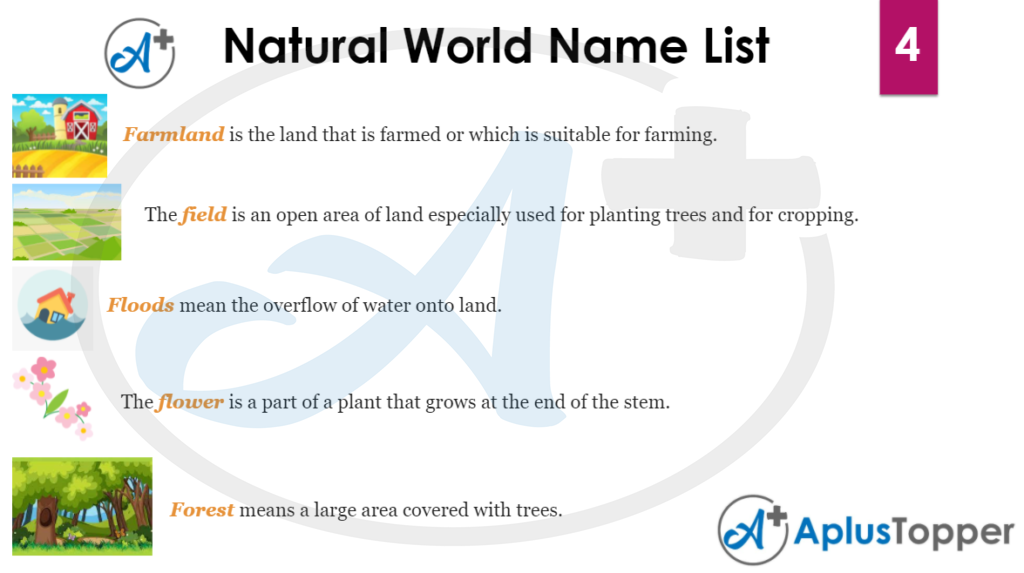 Glacier is a large body of ice and snow. It is formed because all snow does not melt in summer. The weight of the snow pressures the lower parts of the snow and it creates ice. After many years the ice is converted into glaciers and it will start growing large.

Grass belonging to the plant family. The grass is too small with narrow leaves. They grow wildly and they also cultivate on lawns. The grass is also called graminoids. There are at least 10,000 species of grass.

The ground is the solid surface of the earth. It is a mixture of clay, organics, minerals, and sand. We use the ground for Playing games.

A hill is a piece of land that rises higher than the surrounding surfaces. The top of the hill is called a crest. An example of a hill is a natural elevation smaller than a mountain. Hurricanes are the most violent storms on earth. They form near the ocean water and the equator. Actually, they form on large oceans like the Atlantic and Pacific oceans. The speed of the wind is 74 miles per hour or greater than that when the hurricane occurred.

Ice storms are caused by freezing rain. It occurs when the air temperature is 32 to 38 degrees. During the ice storms, the rain falls into layers of freezing air near the surface of the earth. It occurs mostly in North America.

Jungle means uncultivated land. The land grown with plants, trees, animals, and other living organisms is called a jungle. It is a risky place or wild.

Lake means a large area of water surrounded by land. There are millions of lakes in the world. The lake stores the water. They are found in mountains, seashores, deserts, and lakes that prevent plants from growing. 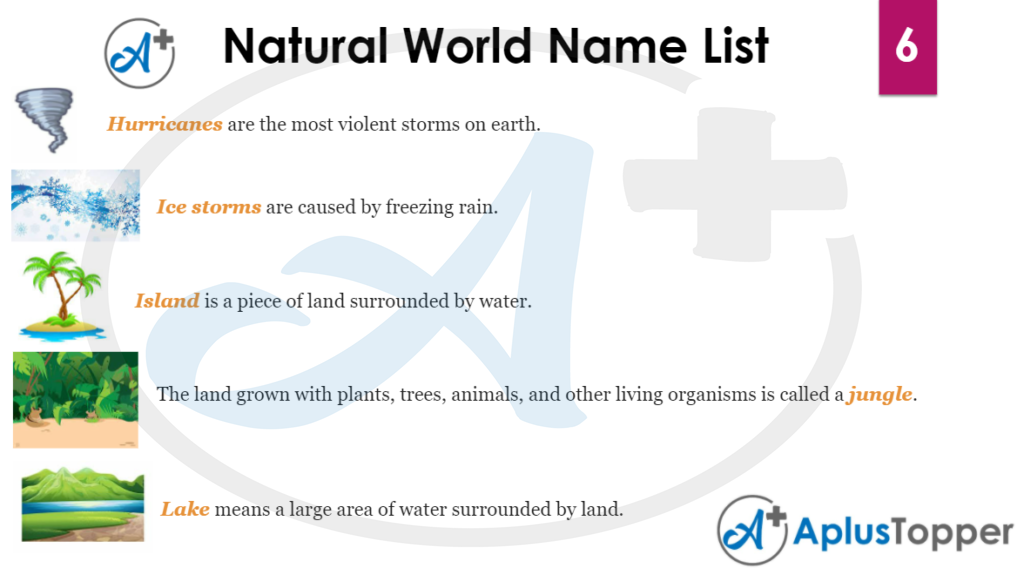 Lighthouse is a structure or a tower with a light that gives the signal to navigators. Lighthouses are in all shapes and sizes and it is located at the harbors and islands.

Meadow means land covered with grass and grass with wildflowers. The animals found in the meadow are shrews, red foxes, snakes, and many birds. It occurs naturally.

A meteor is a streak of light in the sky. It is called a shooting star or falling star. It is formed when the sharp rock crashes with the earth’s atmosphere.

Mines are a place with deep holes and tunnels are dug under the ground for minerals such as coal, diamonds, and gold. They are different types of mining are underground, open surface, placer, and in situ mining.

Mountains are an elevated portion of the earth’s crust. Mountains are slowly leveled, related to the weathering. It is greater than a hill, it is 2000 feet or greater.

Mud is lighter than sand and heavier than clay. It is made up of quartz and feldspar. It is soft and sticky and formed by mixing earth and water. 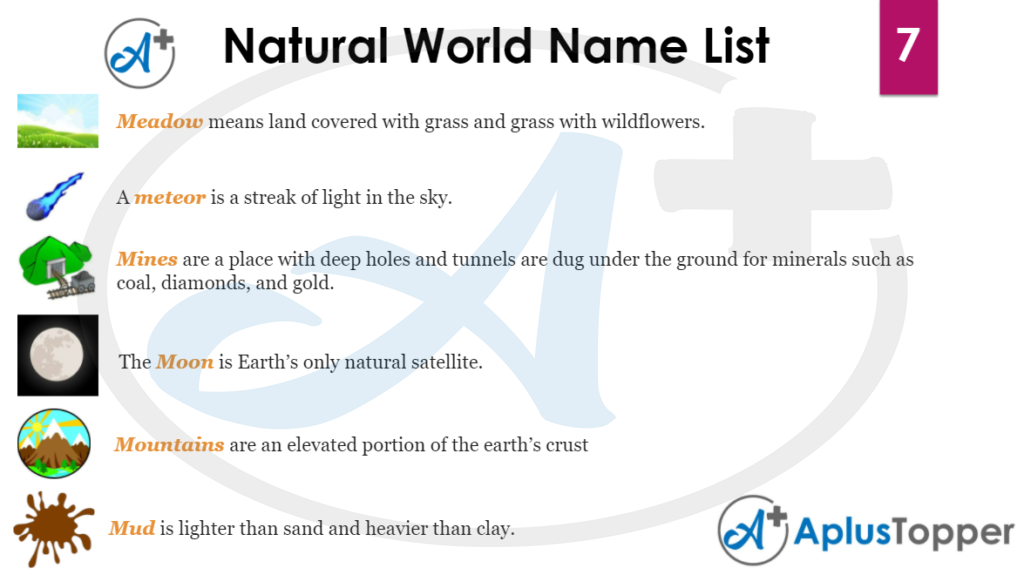 The ocean is a continuous body of saltwater. It covers more than 70 percent of the earth. In the ocean, the salt is formed by rain washing mineral ions from the land into water and carbon dioxide in the air dissolves into rainwater which makes it acidic.

Park is a public garden. It is a piece of enclosed ground with games and plants by royal prescription. It is a place for children and families to connect with nature and recreate outdoors.

The path is a way through a forest, field, mountain and it is used to seeing plants and animals. It is also called the natural tail.

A planet is a celestial body that is in orbit around the sun. A planet is a large object such as venus or earth that orbits a star. Planets are smaller than stars and they do not make light.

The pond is an area filled with water. Either natural or artificial. It is smaller than a lake. ponds have fresh water. There are different types of pond-like biological ponds, fish ponds, mirror ponds, and so on.

Roads are used for traveling people, animals, or wheeled vehicles to move. Roads make economic development and growth important in social benefits. Roads are made up of concrete which uses sand, rocks, cement, and water. 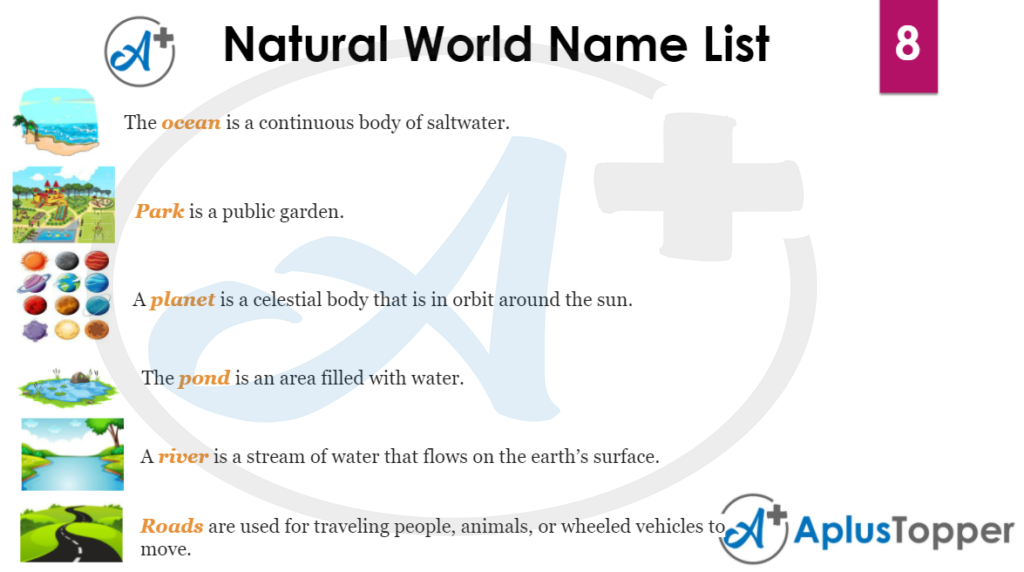 Sea is a portion of the ocean that is partly surrounded by land. There are 50 seas around the world. Seawater is saltwater. Seas feed us, regulate our climate and generate oxygen.

A star is a luminous ball of gas. It consists of hydrogen and helium, Nuclear fusion reactions in its core support the star gravity and produce heat. The sun is the closest star to the earth. We see stars in the sky like dots of light.

Storm means a disturbance of the normal condition of the atmosphere. It manifests itself by winds of unusual force or direction often accompanied by rain, snow, hail, thunder, and lightning. People also used the word storm to describe strong winds.

The Sun is a star at the center of the solar system. Sun radiates the energy mainly visible light, ultraviolet light, and infrared radiation. All planets revolve around the sun.

Trees are perennial plants with stems, trunks, and branches with leaves. Trees give us oxygen and store carbon stabilize to soil and give life to the world’s wildlife. Trees also provide shelter and material for tools.

The tunnel is an underground passageway. It has been made under the ground, usually through a hill or under the sea. Tunnels may be for foot, vehicular road traffic, rail traffic, or for a canal.

Volcanic Eruption means when lava and gas are released from a volcano. It is the most dangerous type of eruption called a volcano. As the lava cools it forms a new crust on the edges of crusts.

Waterfalls are a point in a river. Where water flows vertical drop or series of step by step drops. Waterfalls are also called cascades. The process of erosion and wearing away of earth plays an important part in the formation of waterfalls. 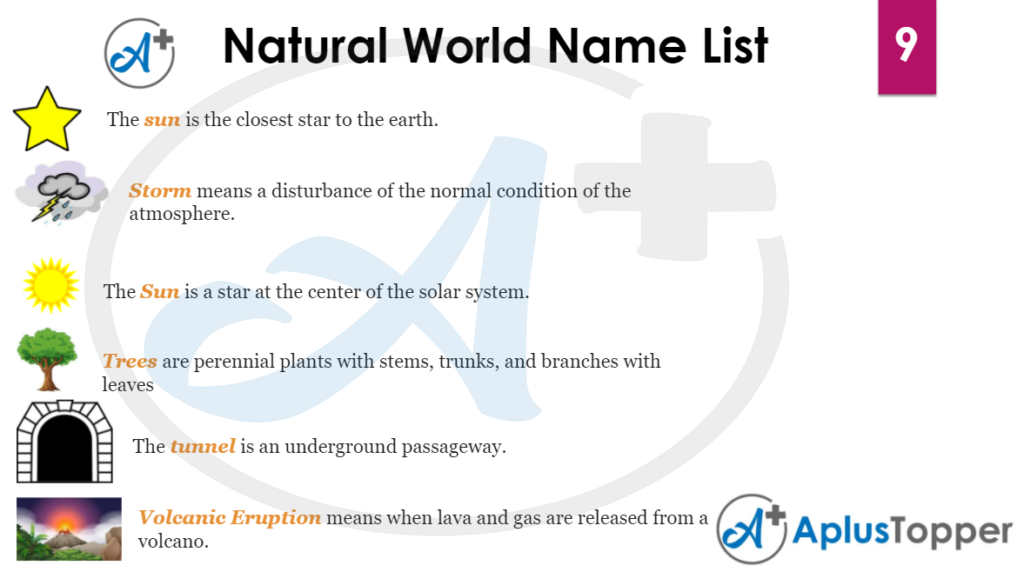