Essay on MLK: MLK, Martin Luther King Jr. was an African-American leader in the United States. The man lost his life while performing a peaceful protest for the betterment of the blacks in America. His real name was Michael King Jr.

Martin Luther attained a PhD on completion of his studies. He was an American Christian minister and activist and became the visible leader and spokesperson in the Civil rights movement from the year 1950s until his assassination. He was among one of the greatest men who dedicated his life in serving the community.

We provide students with essay samples on a long essay of 500 words and a short essay of 150 words on the topic MLK for reference.

Martin Luther King Junior was born on January 15th, 1929. The man was an American Christian minister and activist who later on became the most famous spokesperson and figurehead in the civil rights movement. He was assassinated on April 4th 1968.

Martin Luther King was a good man who decided to dedicate his life for the community. MLK was an American minister, activist and humanitarian. He worked for several other causes actively participating in many protests and boycotts.

King is well known for advancing civil rights through civil disobedience and non-violence, which was again inspired by Mahatma Gandhi’s nonviolent activism and Christian beliefs. King’s other inspiration was the works of Nelson Mandela.

King led Montgomery bus boycott in 1955, and later he became the first president of SCLC – Southern Christian Leadership Conference. King helped in organizing the March on Washington in 1963, where the man delivered his famous ‘I have a dream’ speech on the steps of the Lincoln Memorial.

The Nobel Peace Prize was given to King on October 14th, 1964, for his works in combating racial inequality by nonviolent resistance. In the year 1965, King helped in organizing the Selma to Montgomery marches. In his final years, King expanded his focus to include opposition towards capitalism, poverty and the Vietnam War.

A national occupation of Washington D.C. was planned by King that was called the Poor People’s Campaign, when he was killed on April 4th 1968 in Memphis, Tennessee. The man had made many enemies during his lifetime as a leader of the Civil rights Movement. The government also had plans to hurt his reputation.

Martin Luther King Jr. was a great speaker motiving the blacks to protest using non-violence. He used peaceful strategies like a protest march, boycott, and sit-ins etc. to fight against the laws of the government.

No matter how many times the man was attacked in public or his house was bombed, King was firm on his believes of non-violence as a means to an end. He was successful in changing the lives of the African Americans of his time and the subsequent decades.

According to King, all men were equally created, and all of them should be entitled to enjoy the same rights and privileges. His goal was to turn the minds of people so that masses could have the same understanding. He staged non-violence protest, strikes, and speeches. 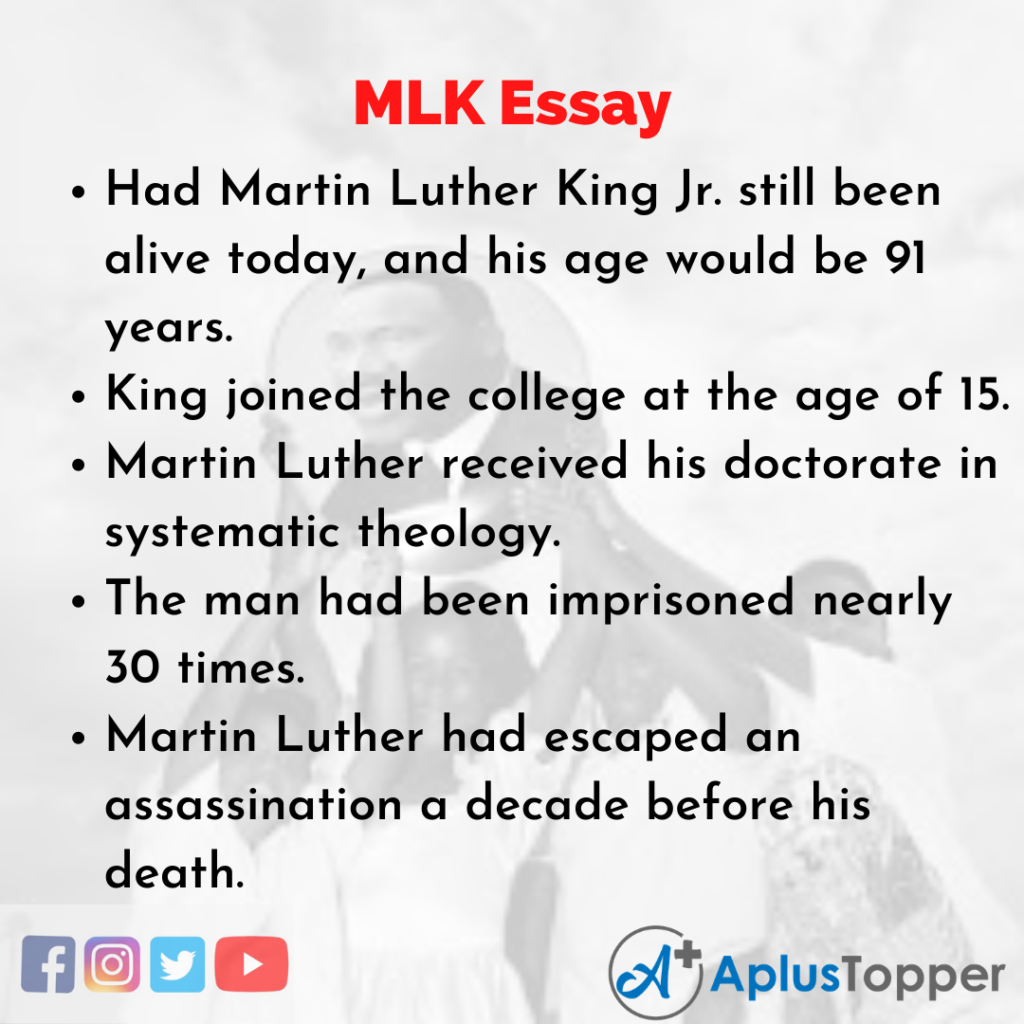 Martin Luther King Jr. or MLK was a social activist and a Baptist minister. He played a crucial role in the American civil rights movement from the mid of 1950s until he was assassinated in 1968. The victims of injustice and economically disadvantaged African Americans were sought for equality and human rights by Martin Luther King, through peaceful protest.

Martin Luther is one of the most well-known leaders of the African American who worked for the welfare of his community throughout his lifetime. He had dedicated his life for the people of his community. The man was the strongest man in the community which made him very famous.

King and his fellow companions of peaceful protestors forced the government several times to bend the law. Martin Luther King’s life has a strong seismic impact on the thinking and life of blacks. He was among one of the marvellous leaders of the era influencing and positively changing lives.

10 Lines on MLK Essay in English

1. Had Martin Luther King Jr. still been alive today, and his age would be 91 years.
2. King joined the college at the age of 15.
3. Martin Luther received his doctorate in systematic theology.
4. The man had been imprisoned nearly 30 times.
5. Martin Luther had escaped an assassination a decade before his death.
6. A bullet also killed King’s mother.
7. President Ronald Reagan in the year 1983, signed a bill that created a federal holiday in the honour of Martin Luther King Jr.
8. The last public speech of King foretold his death.
9. ‘I have a dream’ speech by Martin King Jr. was not his first at the Lincoln Memorial.
10. King’s last public speech predicted his death. Question 1.
What has America done in the memory of Martin Luther King Jr.?

Answer:
Every year, the day of his assassination is celebrated in the U.S. as Martin Luther King Jr. day. There are also schools and buildings named after him in his memory, and there is a Memorial at the Independence Mall.

Answer:
The man was second of the three children to Alberta King and Reverend Michael King. King’s mother named him Michael, and that is the name that was entered into his birth certificate.

Answer:
The man was a transformational leader. Even after so many years of him passing away, King I still influencing a generation of individuals towards equality and trying to reform a system towards those ideals.