Metamorphosis Essay: Metamorphosis is a novel which was written by Kafka in which he describes a man who gets transformed into a bug. This novel has its uniqueness. It was created in 1912.

Kafka gained fame and popularity during the Great Depression with his writings which generally dealt with the political problems being faced. Humanity and modernism are the main themes in Kafka Story.

We are providing students with essay samples on a long essay of 500 words and a short of 150 words on the topic of math for reference.

Change of form or nature of a thing or a person is defined as Metamorphosis. It can be caused by natural or supernatural means. This novel revolves around a person named Gregor who leads an everyday life and works as a travelling salesman, and he has the least human connections. As he is a travelling salesman, he spends most of the time on the road. He carries the burden of his entire family, and he is the sole earner in his family after his father’s business goes bankrupt. One day Gregor wakes up to find himself as a bug.

Gregor loses his identity and found himself as just an insect. At first, he thought he thought he woke up dreaming a monstrous dream but then he realizes that it wasn’t a dream and it’s reality. His transformation into a bug signifies the intolerable way of life he has been living.

He gets terrified of seeing his new appearance with countless sets of legs and a hard shell. His family also finds out about the physical appearance of Gregor and gets shocked. His mother becomes unconscious, and his manager runs away from the apartment. Gregor manages to go back to his bedroom by crawling but gets stuck. His entire family moves him into the room and closes the chamber. Gregor and his family settle into routine life after getting shocked and perplexed on seeing the transformation. Gregor starts to learn the new capabilities of his new body. Grete becomes his primary caretaker who feeds him twice a day and even cleans his room. Gregor learns to crawl all around the room. Grete, with the help of his mother, moves out all the furniture out of the room giving him more space to crawl. On seeing Gregor, his mother faints once again, and Grete runs into the living room to get some medicines followed by Gregor.

After his father returns home, Grete explains all the things that happened, and on hearing this, his father gets agitated and starts chasing Gregor all around his room and starts throwing apples at him. One apple hits him hard, and he becomes paralyzed. Gregor’s mother rushes and requests him to stop beating Gregor. It takes almost a month for Gregor to heal, and the door of Gregor is always left open so that he could witness the evening routine of his family.

The family hires a maid to clean and also takes in three tenants to meet the financial needs of the family. One night the tenants invite Grete to play the violin. On hearing the violin sound, Gregor gets excited and goes to the place where Grete plays the violin. On seeing the appearance of Gregor, the tenants get terrified and move out of the room without paying any rent. Grete insists that they should get rid of Gregor so that they could lead an everyday life. Gregor listens to her sister’s statement goes back to his room. Gregor gets so disappointed, and it turns out to depression, and he finally dies the next morning. After a few hours, Gregor’s maid finds him dead and informs it of the family. The family travels to a new apartment and starts living everyday life. 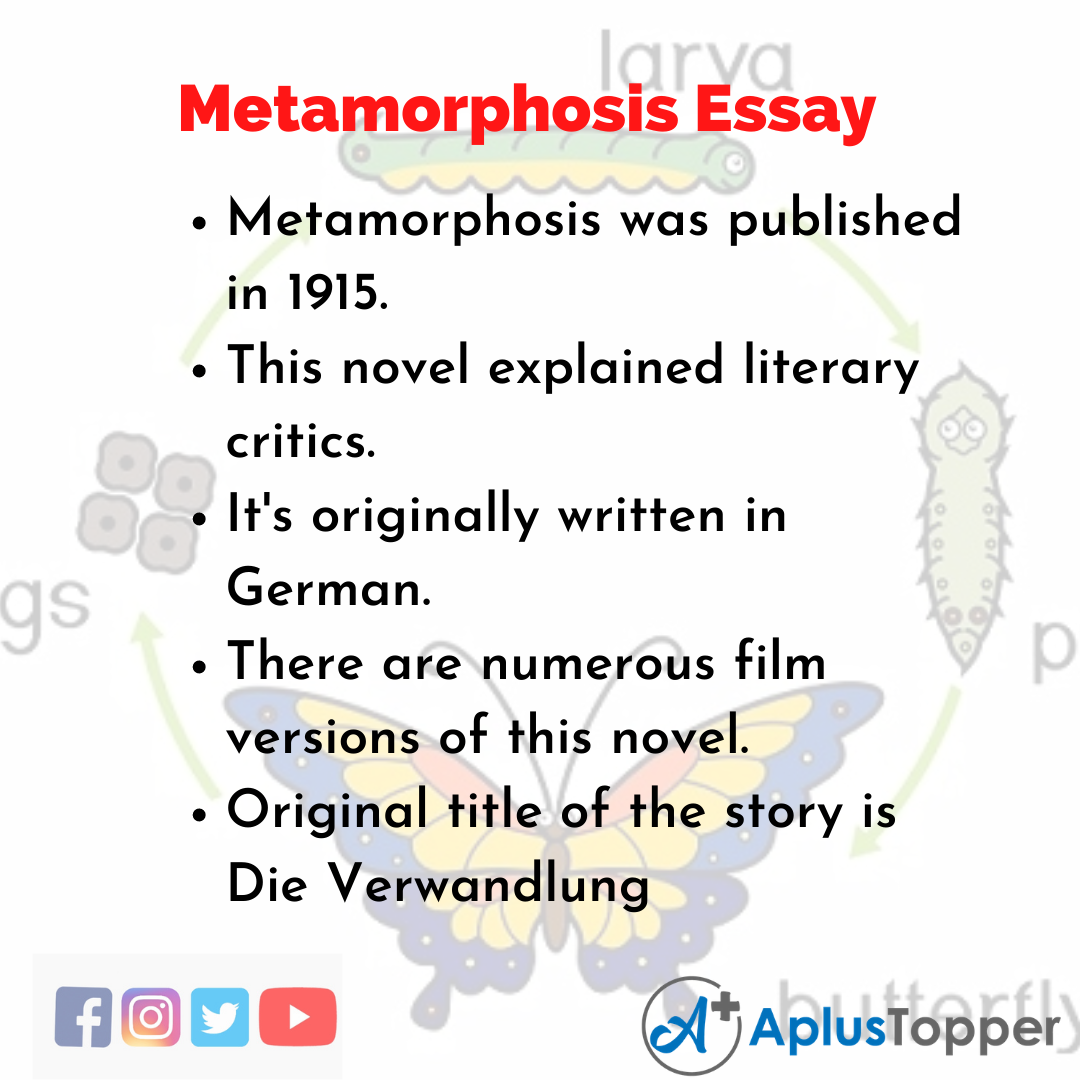 Kafka writes Metamorphosis. Gregor is a travelling salesman who carries the burden of the entire family and leads an everyday life. One day he wakes up to see himself as a bug. He gets terrified on seeing his legs and nutshell at his back. His entire family gets frightened at the physical appearance of Gregor. Gregor’s sister Grete starts taking care of Gregor by feeding him twice a day and cleaning his room. Gregor slowly learns to use his capabilities and starts crawling all around the room.

Grete, with the help of her mother, decides to move all the furniture out of his room so that he could have more space. Gregor’s mom faints and becomes unconscious. Grete goes to the living room to get some spirits and Gregor follows her. Grete gets terrified in seeing Gregor behind her.

After her father returns home, Grete explains all the things that happened. Gregor’s father gets agitated and starts chasing Gregor all around the room and start throwing apples at him. One apple hits him back hard, and he becomes paralyzed. It takes up to one month to heal up.

Gregor’s family appoints a new maid to clean and give the apartment to rent for three tenants to reach the financial needs. One day the tenants invite Grete to play, and Gregor goes to see his sister playing the violin. Seeing Gregor, the tenants get terrified and leaves the room without paying any rent. Grete insists on getting rid of Gregor to lead an everyday life. On hearing this, Gregor feels disappointed and finally dies the next morning. The maid finds Gregor dead and informs Grete and family members. After Gregor’s death, the family moves to a new apartment and lead an everyday life.

10 Lines on Metamorphosis in English 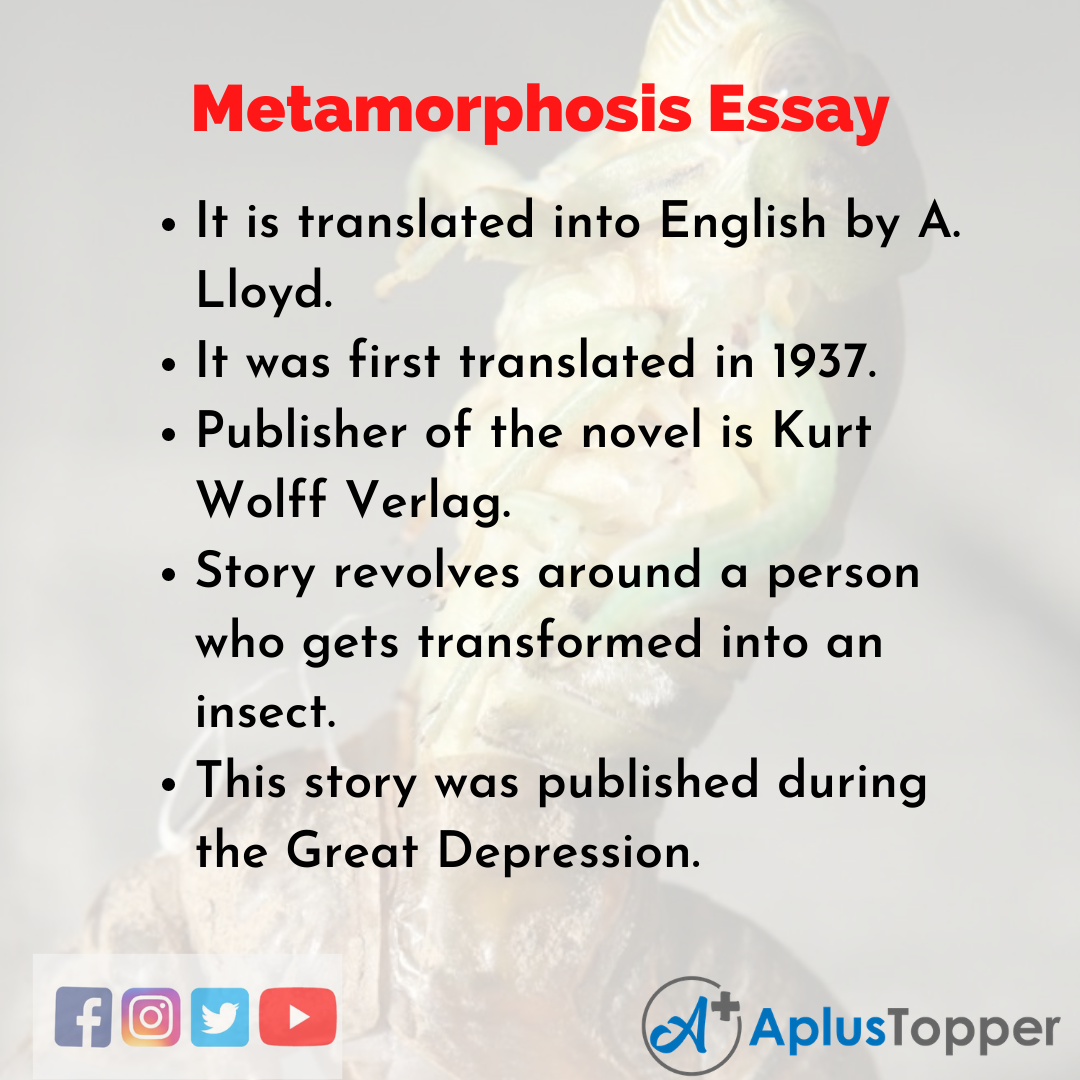 Question 1.
Why did Gregor thought it’s a dream at first?

Answer:
Gregor thought it was a dream because he never expected to transform into a bug all of a sudden.

Question 2.
Why did the author use Metamorphosis as a title?

Answer:
Metamorphosis means the transformation of a thing, and in the novel, Gregor gets transformed into a bug, so Metamorphosis is a suitable title.

Question 3.
Why did Gregor die?

Answer:
He was disappointed and depressed on hearing his sister’s statement, which ultimately leads to his death.

Question 4.
Why did the tenants leave the room?

Answer:
They left the room without paying any amount because they were terrified of seeing Gregor.