Mesh Topology Advantages and Disadvantages: Mesh Topology is a kind of network setup where all the devices and the computers are interconnected. It is a structure that can connect a majority of the transmissions to be distributed if, for some reason, one of the connections fails. Mesh topology is an example of how wireless network works nowadays.

With the help of mesh topology, we have been able to achieve a full or partial connection. In case of a complete connection, all computers are connected, and we can calculate the number of connections with a specific formula. If there is a partial connection, then at least two of the computers will connect to multiple devices. It is an excellent way to implement primary connections without worrying about any computer failing to operate and disrupting the connection. Here are the advantages and disadvantages of mesh topology. 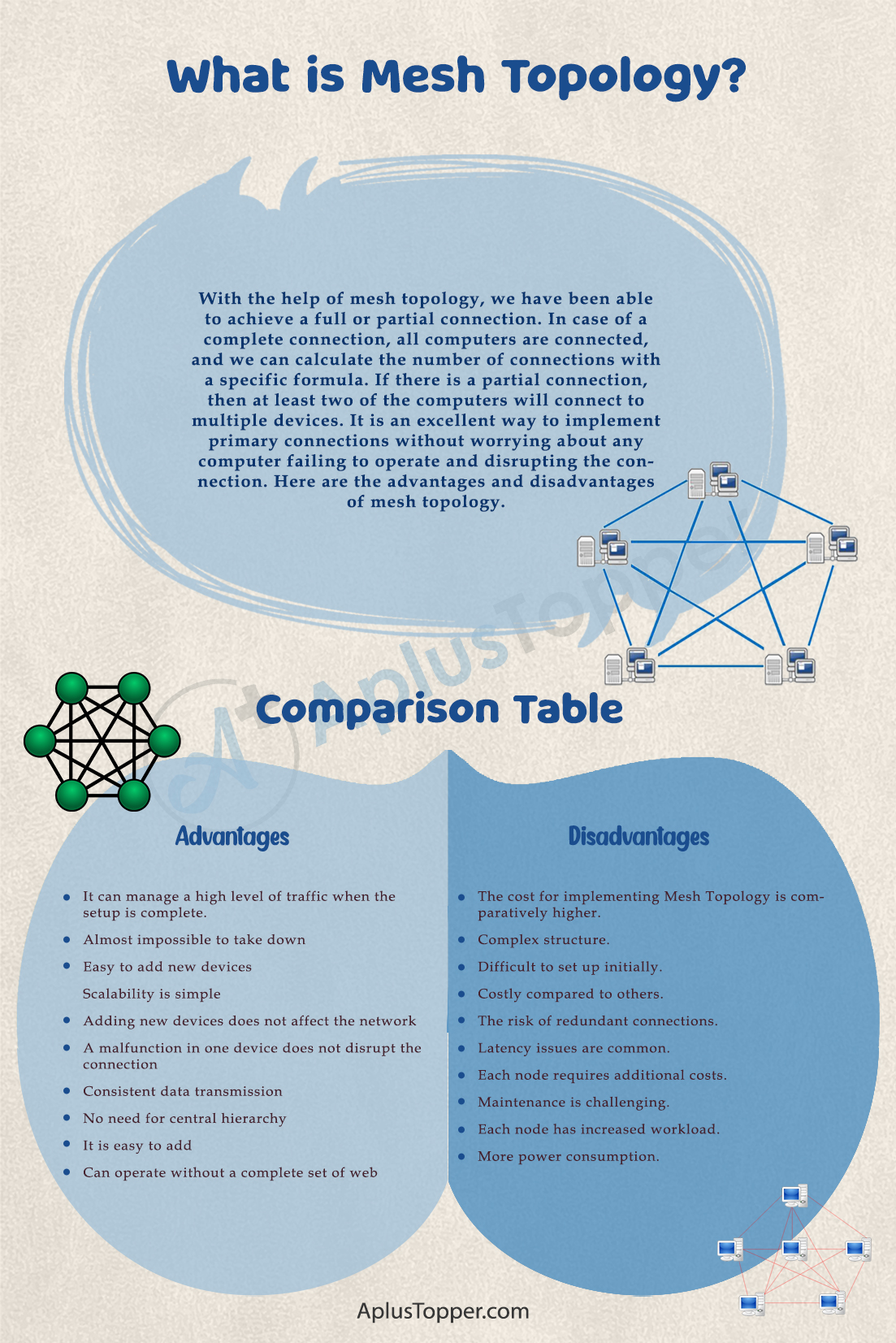 There are several advantages of Mesh Topology, and learning about these can help you decide how to set up the network and benefit from it.

Though Mesh Topology has many advantages, there are some disadvantages. Knowing these can help one to understand the flip side of the coin. The disadvantages are as follows. 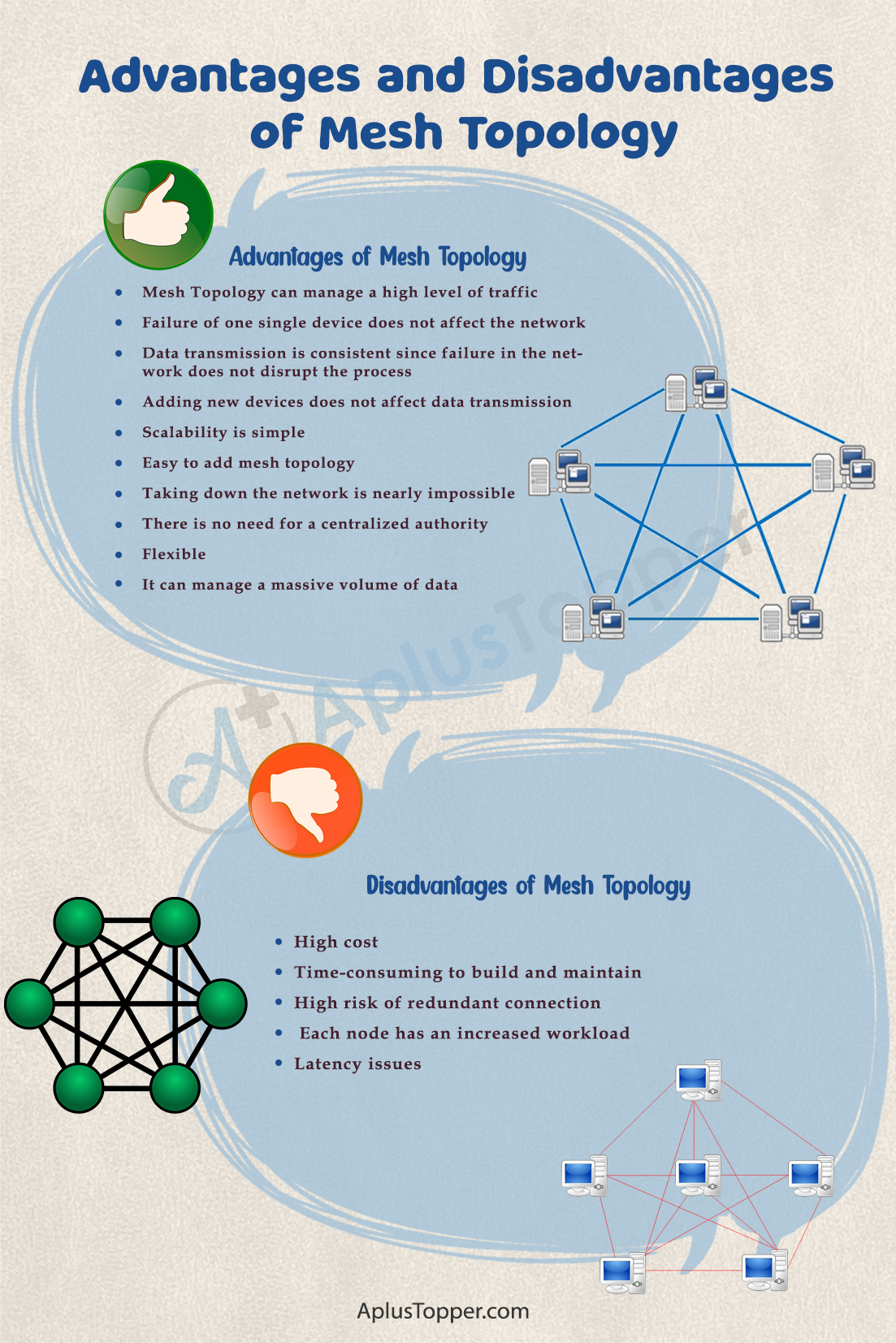 Comparison Table for Advantages and Disadvantages of Mesh Topology

Analyzing topics by learning their advantages and disadvantages is an excellent way to obtain knowledge. Knowing about more issues such as this will help to prepare for international competitive exams in lesser time. 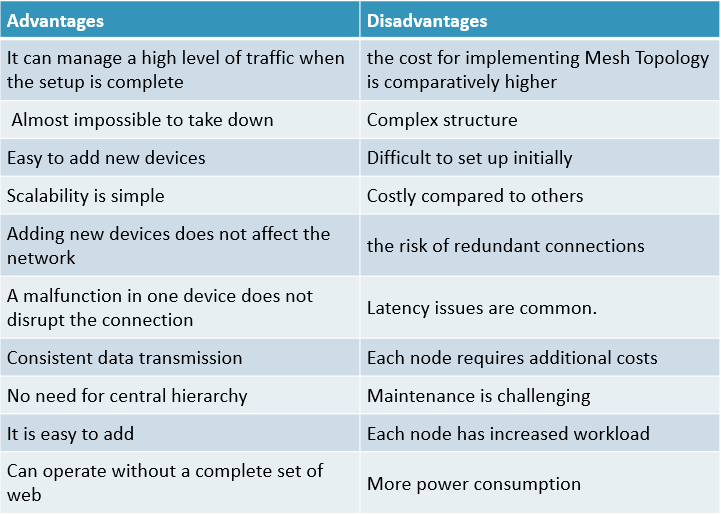 FAQ’s on Pros and Cons of Mesh Topology for Students

Answer:
The structure is such that it can efficiently manage traffic effortlessly due to the multiple nodes involved. Since there are various nodes, it can handle a high level of traffic when the setup is complete and correct.

Question 2.
Where can one use Mesh topology?

Answer:
People all around the world still use it though it is one of the oldest forms of networking. Nowadays, home automation needs, HVAC systems, and smart buildings have mesh topology.

Question 3.
Why are the nodes essential for mesh topology?

Answer:
The potential node distribution points in a building or other areas are an essential factor because there aren’t enough nodes, then linkage problems may occur while processing the messages.