Medicine English Medical Vocabulary: Medicines play a vital role in medical science. They serve as the building blocks of the field of medication. In this article, we have designed a list of medicine names vocabulary to help the readers have a better understanding of the working and constituents of these medicines. We have also included a list of descriptions of these medicines, which will make the process of learning even more fun.

Doctors and medical professionals play a vital role in making our lives simple. This article has a list of medicines that will help us in understanding the role and functioning of the medications that are curing us on a daily basis. 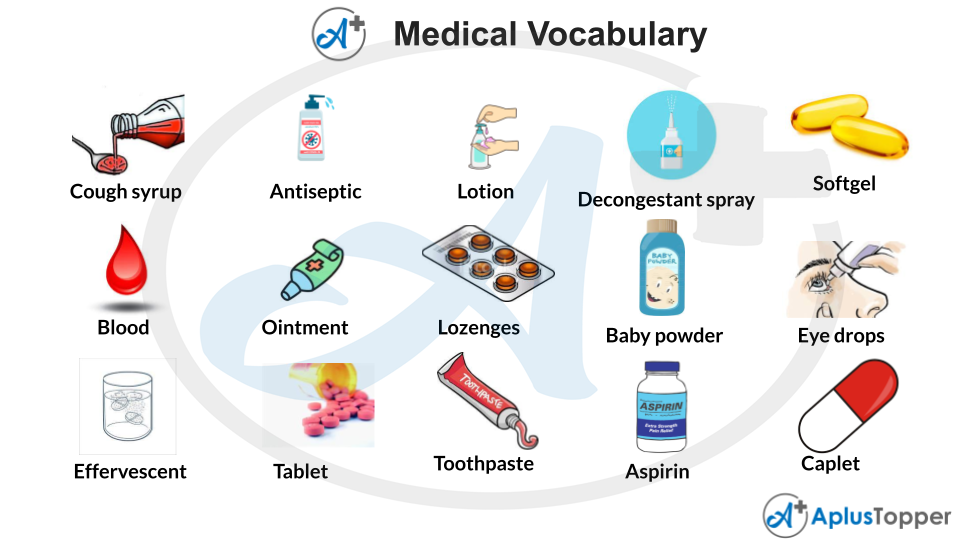 Capsules have medicine enclosed in an outer shell. The outer shell gets broken down in the digestive tract, and the medicine is absorbed into the person’s bloodstream. The medication is then distributed through the body and is metabolised similarly to the medication in a tablet. The capsule is usually made with gelatine and can be of two types – hard and soft.

Tablets are medicines mixed with binder powder, moulded and pressed to a tablet form. It is a pharmaceutical oral medicinal dosage. Most tablets consist of a thin coating which makes them easy to swallow, helping the drug to be dissolved in the stomach. They are the most well-known type of pill – safe, inexpensive and effective way of delivering oral medication.

Medical solutions are necessary for treating dehydration or cleaning and treating wounds. The medicines are dissolved in a liquid in order to create the solution, which is then consumed by the patient.

Oral rinse is a type of mouth wash that is used for reducing bacteria and germs in the mouth. It is also used for treating gingivitis (redness, swelling, bleeding gums). Using an oral rinse every day after brushing helps in keeping the mouth clean and fresh.

Cough syrup is a liquid like substance used for suppressing the cough. It functions by thinning and loosening the mucus in the airways, which clears congestion and makes breathing easier. It also acts on the part of the brain, which reduces the urge to cough. It is consumed by people who want some relief from the constant coughing and uncomfortable feeling accompanied by it.

An antiseptic is used for stopping or slowing down the growth of microorganisms. They are generally used in hospitals and other medical centres for reducing the risk of infections during any surgery and other procedures. It is also prescribed by doctors to patients who have been infected by any virus or bacteria – such as for diseases like common cold, flu, fever and stomach ache.

In liquid medicines, the active parts of medicine are combined with a liquid for making it easier to take or better absorbed. Liquid medicine is also often known as a solution, mixture or syrup. It is mainly prescribed to children who are unable to consume tablets or capsules. Many liquid medicines have added colouring or sugar, and many don’t.

A lotion is used to maintain the hydration level of the skin for locking the moisture. This keeps the skin soft, healthy and supple. Unlike any cream, lotions are less greasy and consist of more water content. They also have other additional benefits, such as reduces skin flakiness and dryness. It also helps with skin conditions such as infections, itchiness, pain or allergy.

Decongestant sprays are used for temporary relief of a congested nose that has been blocking by many conditions such as sinusitis, common cold, allergies and hay fever. It functions by narrowing the blood vessels in the nasal area, reducing congestion and swelling. It makes breathing easier for a person who has been facing congestion of the nose.

It is a dosage of oral medicine made in the form of a specialised capsule. It consists of a gelatine-based shell that surrounds a liquid fill. Soft gel shells are a combination of water, gelatine, opacifier and a plasticiser like sorbitol or glycerine. It is a multivitamin product used for treating or preventing vitamin deficiency caused by certain illnesses, poor diet or during pregnancy.

Blood transfusion is a medical procedure that is done for life-saving. In many situations, patients need to be given blood, such as when blood is lost due to an injury, or excess blood is lost during surgery. The blood is collected from donors, and the donor’s blood is matched with the recipient’s blood before it is transfused.

An inhaler is a tool holding a medicine which one can take by breathing in. inhalers are the main form of treatment for asthma. Inhalers can deliver medicines to the airways of an individual, which will help prevent asthma attacks, relieve symptoms during an asthma attack, or do both.

An ointment is a semi-solid oil-based preparation for external use only intended to be applied on the skin. Generally, they have a greasy or oily consistency and can appear ‘stiff’ when applied to the skin. Ointments have drugs in them that act on the skin.

Implants or patches are absorbed by the skin – like nicotine patches that help give up smoking or any contraceptive implants. These are usually used as a long-acting form of medication that is used for treating any kind of addiction. Patches adhere to the skin for delivering the drug into the body.

Lozenges are oral medicines used for defining dosage forms that are intended to slowly dissolve inside the mouth of an individual for local delivery, mainly within the oral cavity. Numbing agents that are found in these lozenges help in easing the pain and soreness related to a sore throat. They are primarily used for the systematic absorption of drugs.

Some medications come as powder or granules and are taken by mouth. They can also sometimes be mixed with a small amount of water or food. This makes intake of the medicine much easier for people who have a difficult time taking the medication, especially children.

Eye drops can be used for treating a variety of eye problems. They are most often saline solutions with medication. Antibiotic eye drops are prescribed by medical professionals for treating bacterial eye infections. They function by killing the bacteria that have entered the eye. Sometimes, eye drops don’t have medication in them and are only used for the lubricating and tear-replacing solution.

These tablets were designed for producing solutions that release carbon dioxide simultaneously. Generally, these tablets are made by compressing the active ingredients with a mixture of bicarbonates and organic acids like tartaric and citric acid. They are used for simplifying the handling of doses, promote superior, provide optimal compatibility and increasing any patient’s liquid intake.

A well-known term for any medication taken in doses that are measured by drops. These are any liquid medications that are administered using droppers. It refers to the medicine that is applied to one specific area. These are mainly used where the active medicinal part works best when it reaches the affected area directly. They are primarily used for ears, eyes or nose.

An injection is used for administering a pure liquid form of medicine into the tissues of the body beneath the skin. It is injected using a sharp needle and a hollow tube. These shots are usually used when the person needs immediate results from the medication. There are mainly three types of injections – subcutaneous, intramuscular and intravenous.

Toothpaste is a gel or paste used with a toothbrush for cleaning and maintaining the health and aesthetic of the teeth. Toothpaste is used for promoting oral health and hygiene. It helps in strengthening the enamel which has been attacked by acids, remove stains from the teeth, clean and polish the teeth and also freshens the breath.

Aspirin is a tablet used for reducing fever and relieving mild to moderate pain from any condition like toothaches, muscle aches, common cold and headache. Aspirin can be bought over the counter without any prescription. It has also been discovered that taking aspirin daily can reduce the risk of cardiovascular events like stroke or heart attack in people who have a high risk.

These look similar to normal liquids or tablets, but they must not be swallowed. Buccal medicines are held inside the cheek so that the lining of the mouth absorbs the active ingredients. Sublingual medicines function in the same manner, but they are put under the tongue. These medicines are prescribed only under specific circumstances.