Martin Luther King Essay: Martin Luther King Jr. was one of the pioneers who fought for the black people’s civil rights movement in America. He was a national figure and a brilliant orator who knew what to say to make any person understand his heart.

He stayed true to his morals and values throughout his activism. King set the foundation for racial equality from the 1950s till his death in 1968 that continues even today. His leadership and work were the reason for the end of legal segregation across America. In all that he did, he followed non-violence as his fundamental base. This was something that was an influence of Mahatma Gandhi and his role in the independence of India. He is well known for his speech ‘I have a dream,’ and a year after this speech, the law prohibiting racial discrimination was passed by President Johnson in 1964.

We provide children and students with essay samples on a long essay of 500 words and a short essay of 150 words on the topic “Martin Luther King” for reference.

Martin Luther King Jr. made a statement about how sometimes people must make decisions because it is right, regardless of whether it is safe. This is a testament to the work that he did and the legacy he left behind. He was born Michael King Jr. on the 15th of January 1929, in Georgia to Reverend Michael King Sr. and Alberta King. He began his activism in the 1950s after his education and marriage.

The incident that launched him as a national figure and spokesman for the civil rights movement was the Montgomery bus boycott that lasted for 385 days. He followed the Gandhian principles of non-violence in his work and leadership of the Southern Christian Leadership Conference. In 1964, he was awarded the Nobel Peace Prize for his work for the rights of the Afro-American population.

Martin Luther King Jr. was an activist that fought for the rights of the Afro-American population. He was also a Baptist minister, an influence that came from his father, Reverend Michael King Sr. He fought for an America where all peoples, regardless of color and race, would live together in harmony.

He took part in and organized various non-violent protests, sit-ins, marches for the sake of his cause. He challenged people to think and fight for equality instead of submitting to the racial discrimination and humiliation that was legal. His work was rewarded with the legal revoking of the segregation and racial discrimination prevalent across the country. He was also the President of the Southern Christian Leadership Conference.

But while King’s work saw the fruit, he was also met with strong and intense opposition, not only from those that were racist but from the government itself. He was accused of being a communist and was placed under the constant surveillance of the FBI. He lost the President’s favor due to his stance on what was happening in Vietnam. He worked fiercely for 13 years until his assassination in 1968. He was awarded the Nobel Peace Peace Prize in 1964.

Martin Luther King is the first person that comes to mind when we talk about the fight for racial equality in America. He lived from 1929-1968 and spent 13 years fighting against racial segregation and discrimination. His father was the source of his Baptist ideals, and his activism as Reverend Michal King Sr. was also a civil rights activist.

King grew up facing racial discrimination, and instead of swallowing his anger, he set about to make a change in a system that legally made space for segregation. He urged people to do the same and led movements, protests, marches, and sit-ins to this effect. He led the Montgomery bus boycott that ended racial segregation in Montgomery. He continued his work and leadership, and while he saw success, there were consequences. He was often imprisoned for his work and even survived a knife attack. None of these things could stop him and continued working, keeping the non-violent principles as the basis for his work. He found inspiration in the lives and work of leaders like Mahatma Gandhi and Nelson Mandela. His famous speech ‘I have a dream,’ was at a march to the Lincoln Memorial in Washington. The very next year, the law prohibiting racial discrimination was passed by President Johnson in 1964.

King’s work ended prematurely in 1968 as James Earl Ray assassinated him. The Civil Rights Act of 1968 was passed soon after King’s assassination, and his legacy lives on even today.

Martin Luther King Jr. made a statement about how sometimes people must make decisions because it is right, regardless of if it is safe or not. This is a testament to the work that he did and the legacy he left behind. He was born Michael King Jr. on the 15th of January 1929, in Georgia. He was one of the three children that Reverend Michael King Sr. and Alberta King had. He grew up with a strong Christian influence as a child from his family. He was also co-pastor with his father until his death at the Ebenezer Baptist Church.

King spent all his childhood in a segregated neighborhood in Atlanta, Georgia, that was the south. But when he came to Morehouse for his freshman year and had an opportunity to see equality and something radically different from home – the lack of segregation. He graduated in 1948 with a Bachelor of Arts from Morehouse.

Martin Luther King is well known for his leadership and participation in fighting for black people’s right to vote, and desegregation among other fundamental rights. King was a leader of the Southern Christian Leadership Conference till his death and came to the forefront with the Montgomery Bus Boycott.

In 1955, Claudette Corvin and Rosa Parks refused to give up their seats for white people on the bus in separate incidents. This sparked off the Montgomery bus boycott that King led. It lasted for 385 days, and this incident resulted in removing segregation on public buses in Montgomery. This boycott launched King into a national figure and spokesman for the movement against racial discrimination.

In 1968, King was in Tennessee in support of sanitation workers on strike. He was assassinated before he was able to complete what he had planned for this rally. James Earl Ray shot him on the 4th of April, causing a wound that turned to be fatal. Over time memorials were made in his honor in America and across the world, recognizing his work.

King is today known as a pioneer for civil rights, and the fight that he began is a fight that continues to date. While his dream has yet to come true, many are working tirelessly and carrying the mantle he left behind. Martin Luther King Jr. in one of his letters from Birmingham prison said that through painful experience alone we can know that freedom is not something that is freely given. The ones who do not have it, must demand it. It shows his grit and perseverance even in the face of opposition. King was a civil rights activist for the Afro-American people. Never forgetting his ideals and principles of non-violence, he fought for the freedom of his people. His leadership was pivotal in legally putting an end to racial segregation in America.

Racism was something that he was acutely aware of as he grew up. Right from the age of six, his friendship with a white boy was taken away when his parents decided that they did not want their son to associate with a black boy. His father played a significant role in educating King about the long history of oppression and racism that his people had faced in America for years. His father was also someone who took a stand against segregation and discrimination when he could. Something that King watched that left a deep impression upon him.

Growing older, King began to hate the whites for the racism he had seen and gone through. He also began to stray from what he had learned in his Baptist upbringing. The oratory skills that King would later be famous for began to bloom around his adolescence. The very first speech that he gave was in his junior year. He said that the black Americans still wear chains, though slavery was abolished years ago. Even a highly esteemed black man is still inferior to the cruelest white man. On his ride home with his teacher on the bus, he was ordered by the driver to stand to let the white passengers sit down. He refused to until his teacher said that he should do what was told, as he would be breaking the law otherwise. When he wrote of the bus ride, he recorded that it was the angriest he had ever been.

King spent all his childhood in a segregated neighborhood and had a chance to see the opposite in Connecticut. He came to Morehouse here for his freshman year and had an opportunity to see things from a new perspective. Here was also where King reconciled with his Baptist upbringing. He graduated in 1948 with a Bachelor of Arts from Morehouse.

In 1953, he married Coretta Scott and were parents to four children, Yolanda King, Martin Luther King III, Dexter Scott King, and Bernice King. It was also in the 1950s that his activism began, which he continued till his death.

King became the pastor of the Dexter Avenue Baptist Church in Alabama in 1954. He was also a member of the executive committee of the National Association for the Advancement of Coloured People.

In 1955, Claudette Corvin and Rosa Parks refused to give up their seats for white people on the bus in separate incidents. This sparked off the Montgomery bus boycott that King led. It lasted for 385, during which King’s house was bombed. He was arrested as well, but this incident resulted in removing segregation on public buses in Montgomery. This boycott launched King into a national figure and spokesman for the movement against racial discrimination.

With other civil rights activists, King came together and founded the Southern Christian Leadership Conference in 1957. Among other purposes, this group was to organize non-violent protests and movements in their pursuit of ensuring civil rights for all, regardless of race. King was a leader of the SCLC till his death.

While he found favor in some officials’ eyes, he put himself squarely in opposition to the President when he spoke against the war in Vietnam. King not only fought for his people but spoke out against all injustice whenever he could. He was also branded a communist by the FBI and was under constant surveillance. So much so that when he was assassinated, it was speculated whether it was the work of just one man or King’s death was a part of a bigger conspiracy.

James Earl Ray was the man who ended King’s long fight against racial discrimination. King was fatally shot, and not even surgery could save him. His death caused nationwide rioting, which took great effort to put an end to. 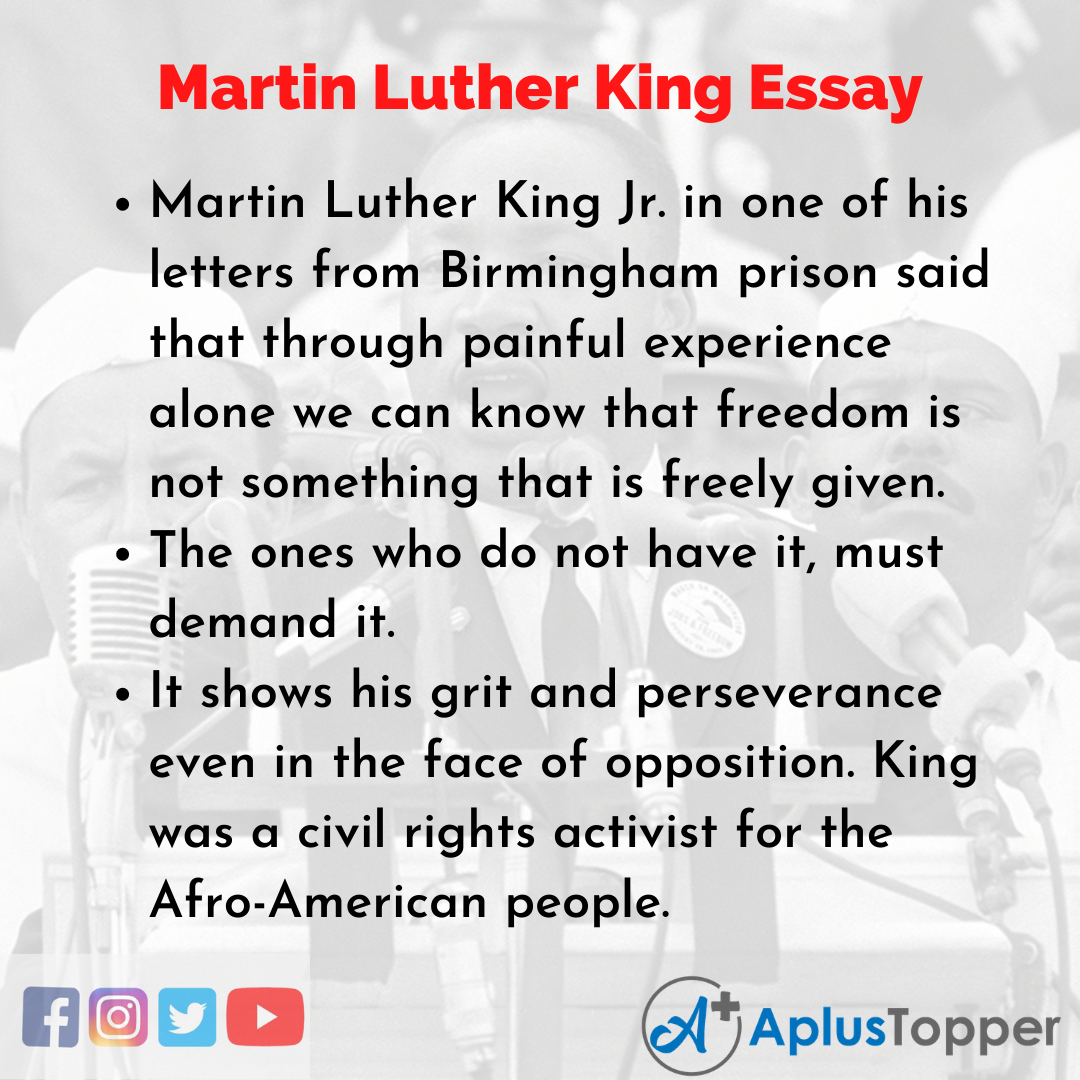 King was one of a kind. He refused to watch oppression take place and do nothing about it. He did his best to change the system to bring about equality and justice to all. His words and ideas are still today held as significant and radical. He changed not only his nation but the whole world.