Macbeth Ambition Essay: Without ambition, several great achievements by humankind would not have been reached. Nobody would have dreamed of creating opportunities, discovering, and clashing against several failures to succeed if there was no ambition driving them.

Though we have always seen ambition as a positive drive towards success, unrestrained ambition is humanity’s greatest downfall. We see ambition as the most important theme in Shakespeare’s Macbeth, also an evil motivation that encourages Macbeth’s cruel nature and slowly turns him into a vicious, bloodthirsty demon.

We provide children and students with essay samples on a long essay of 500 words and a short essay of 150 words on the topic “Macbeth Ambition” for reference.

Ambition has been humanity’s driving force since the beginning of time. But that drive has not always played out to be positive. Throughout history, there have been numerous examples of a man abusing his power and position to achieve things they did not deserve.

The extreme obsession with power and uncontrolled ambition portrayed in the Shakespearean play Macbeth introduces us to an extreme ambition that leads towards a bloody path of greed. In Macbeth by William Shakespeare, the main personality Macbeth shows a link with the themes “Great ambition leads to loss of humanity” and “Paranoia eats away a person’s soul.”

Macbeth’s character is a good, courageous, and beloved man at the start of the play, and after finishing his latest battle, he was given a new title. However, fate seemed to have different plans for the fine, brave, ambitious Macbeth. Macbeth was told by the three weird sisters that he will one day become king. Thus lighting up the fire of greed within Macbeth, head-starting his descent into madness and the guilt he feels towards the acts he has committed.

Lady Macbeth is very similar in the sense that once she was aware of Macbeth’s ambition, it planted her deep-rooted desire for the crown as well. However, their various similarities end with Duncan’s demise and the way they both experience guilt over what they did. Lady Macbeth uses her husband’s drive and ambition to orchestrate the current king, Duncan’s murder so that Macbeth can rule as a king. But despite his lust for the position, Macbeth’s ethic and morality stopped him. Therefore, Lady Macbeth proceeded with the king’s execution alone to help her husband reach his ultimate goal.

Though Lady Macbeth wasn’t entirely the reason behind Duncan’s murder, her evil ambition causes her to proceed with her evil act. Lady Macbeth’s ambition overrides her husband’s, and she convinces him to murder the current king. One could say that without Lady Macbeth, the murder would not have taken place. When Lady Macbeth criticizes Macbeth accusing him of not loving her and doubting his manliness, his ambition increases, and he also wants to prove that all the things he is accused of is false.

Though the story revolves around Macbeth, his wife, and their ambition to get the throne, three witches made the initial strike. Their influence may have introduced the sinister idea into Macbeth’s psyche and giving him the ambition to take over the kingship. You would think that both the characters’ overarching ambition was seizing the throne by getting rid of Duncan. But it’s not the major reason why he does it. Initially, it was his ambition that drove him to do anything for him to attain the throne. But later, it was his manly ego and ambition to prove his wife, his masculinity, and love.

In the end, three sources ultimately led towards the murder of Duncan. Macbeth’s ambition, another is Lady Macbeth’s influence and ambition, and lastly, it is the witches’ influence that led Macbeth to think about becoming the king. The story wouldn’t have taken place if it was not for the overarching ambition of the characters. 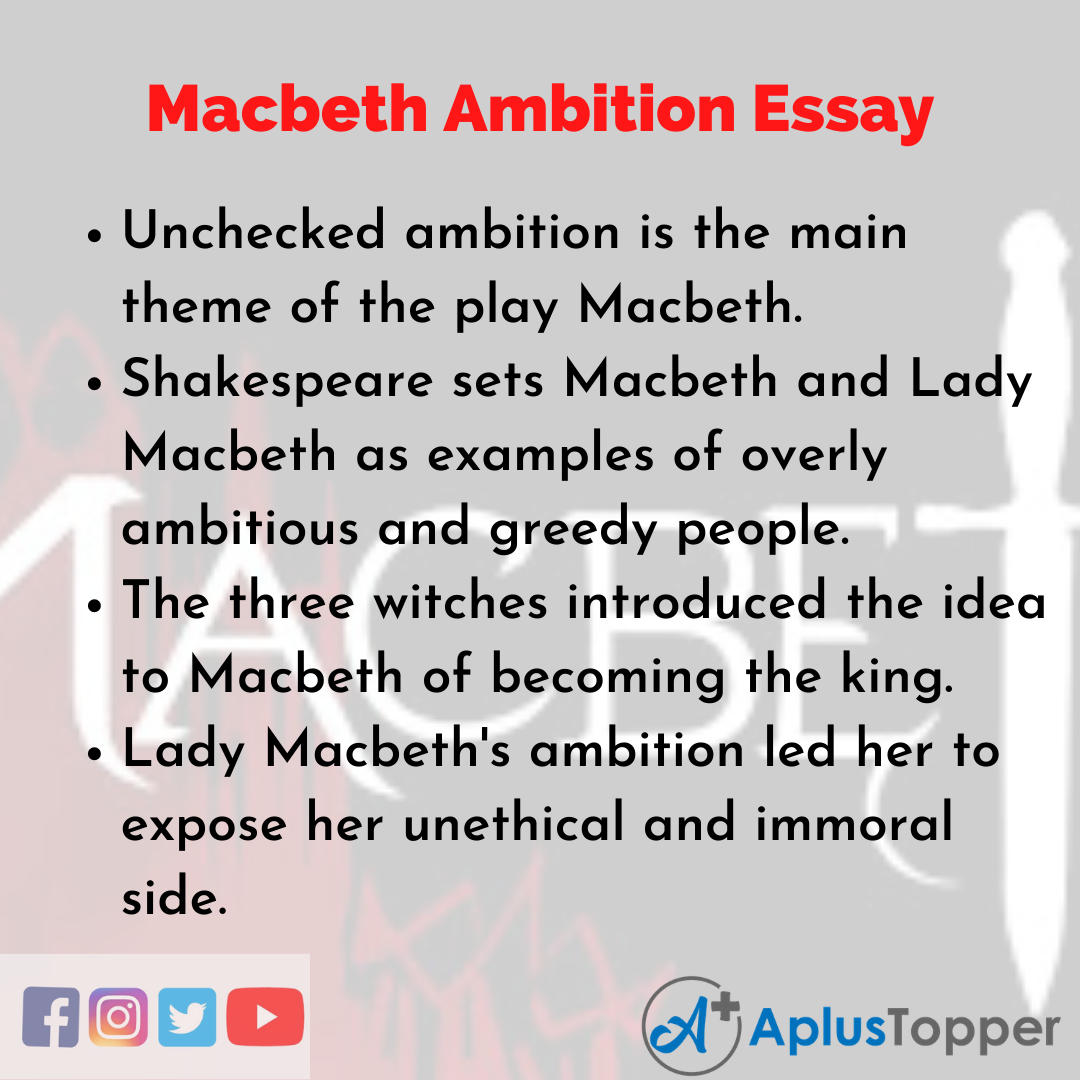 The central theme of Macbeth—the destruction brought by the corrupting power of unchecked ambition— finds its most powerful expression in the play’s two main characters. In the play Macbeth, by Sir William Shakespeare, Macbeth and Lady Macbeth share various similarities throughout the play. Arguably, their most dominating semblance is their shared lust for power. The ambition of becoming the king drives Macbeth, and in the process of becoming one, he and his overtly ambitious and manipulative wife commits multiple murders. But this intense avarice, in the end, leads to their ruin in differing ways.

Overall, Shakespeare presents ambition as an entity that can corrupt a character and pay an inevitably tragic fate for them. He uses Lady Macbeth and Macbeth as examples of people with an unchecked ambition and extreme thirst for power. Ultimately their insatiable greed and ambition for power are the cause that brought upon their deaths.

10 Lines on Macbeth Ambition in English Question 1.
Why is Macbeth’s ambition important?

Answer:
Ambition is an important theme throughout the play of ‘Macbeth.’ is Not only Macbeth ambitious but also his wife, Lady Macbeth

Question 2.
Is ambition good or bad in Macbeth?

Answer:
The ambition in Macbeth is negative as the consequences of the ambition shown here are murders and treachery.

Question 3.
What are the consequences of Macbeth’s ambition?

Answer:
Macbeth’s ambition results in him to commit murders. He murders Duncan, the current king, and people in line for the throne to become the king.