(iii) The loss of power in a transformer can be reduced by :
(A) increasing the number of turns in primary.
(B) increasing ac voltage applied to primary.
(C) using a solid core made of steel.
(D) using a laminated core of soft iron

(v) An important component of Michelson’s method to determine speed of light is :
(A) a NICOL prism.
(B) a bi prism.
(C) a grating.
(D) an octagonal mirror.

B. Answer all questions briefly and to the point: [15]
(i) In an electric dipole, what is the locus of a point of zero potential ?
(ii) What is the resistance of a carbon resistor whose coloured bands are shown in Figure 2.

(iii) A part of an electric circuit is shown below (Figure 3): 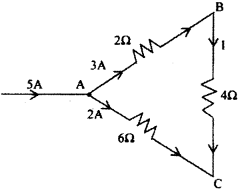 Using Kirchhoff’s 2nd Law, find the current I flowing through the 4 Ω resistor.

(iv) Figure 4 below shows a graph of emf ‘e’ generated by an ac generator versus time ‘t’.

What is’the frequency of the emf ?

(vi) Which electromagnetic wave is longer than X ray but shorter than light wave ?

(viii) Name an optical device, which, when used with a spectrometer, can determine the wavelength of the given monochromatic light.

(ix) Young’s double slit experiment was performed with monochromatic light of blue color. The experiment was then repeated, first with light of red color and then, with light of yellow color. Which color produces interference pattern with maximum fringe separation (i.e. fringe width) ?

(xii) How much energy will be created if 1 g of matter is destroyed completely ?

(xiv) State one important use of a Zener diode.

(ii) D, i.e. a high resistance in series with the coil.

(iv) The correct choice is A.

B. (i) A straight line passing through the center of the dipole and perpendicular to its axis. 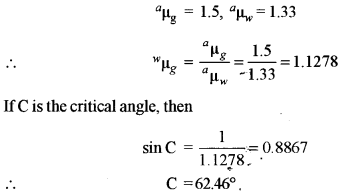 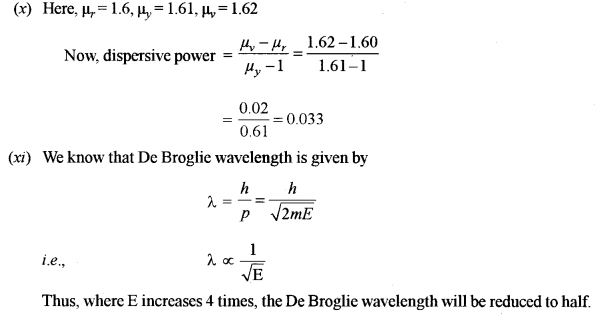 (xii) According to Einstein relation 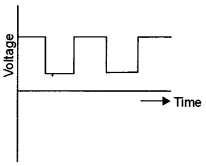 Part- II
(Answer six questions in this part, choosing two questions from each of the Sections A, B and C)

Question 2.
(a) An isolated 16 μF parallel plate air capacitor has a potential difference of 1000 V (Figure 5a). A dielectric slab having relative permittivity (i.e. dielectric constant) = 5 is introduced to fill the space between the two plates completely (Figure 5 b). Calculate : [2]
(i) the new capacitance of the capacitor.
(ii) the new potential difference between the two plates of the capacitor. 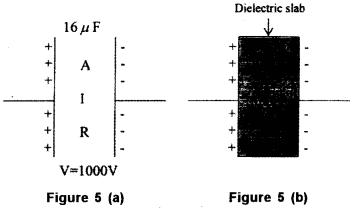 (b) An electron revolves around the nucleus of hydrogen atom in a circular orbit of radius 5 x 10-11 m. Calculate: [4]
(i) intensity of electric field of the nucleus at the position of the electron.
(ii) electrostatic potential energy of the hydrogen nucleus and electron system

(c) (i) It is the phenomenon of evolution or absorption of heat at the two functions of a thermo couple when a current is passed through it from an external source. In Peltier effect electrical energy is being converted into heat where as in Seebeck effect, heat is converted into electrical energy.
(ii) It means that the resistance of a metal of resistance IΩ increases by 4 x 10-3 ohm for every one degree centigrade rise of temperature.

Question 3.
(a) In the circuit shown (Figure 6), PQ is a uniform metallic wire of length 4 m and resistance 20 Ω. Battery B has an emf of 10V and internal resistance of 1 Ω. J is a jockey or slide contact. Resistance of the ammeter A and connecting wires is negligible.
(i) When the jockey J does not touch the wire PQ, what is the reading of ammeter A ?
(ii) Where should the jockey J be pressed on the wire PQ so that the galvanometer G shows no deflection ? 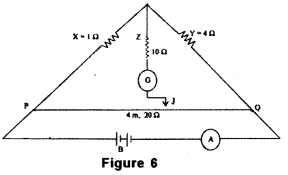 (b) What is ‘current density’ ? Write the vector equation connecting current density J with electric field intensity E, for an ohmic conductor. [2] 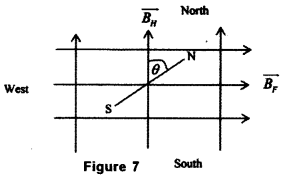 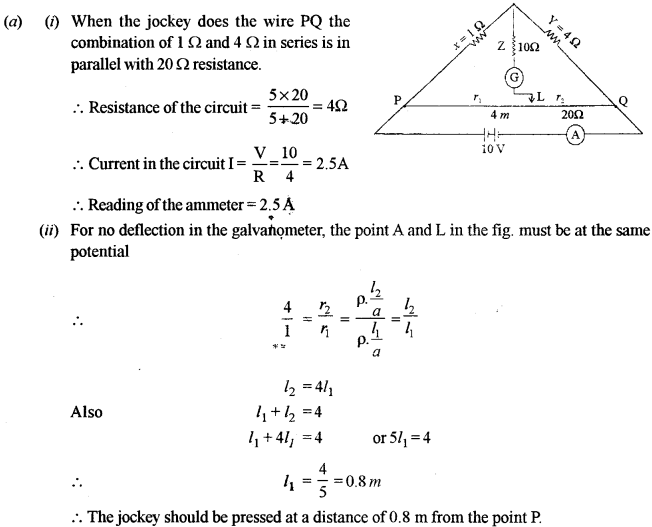 (b) Current density at a point is defined as the current passing through a unit area which is held perpendicular to the direction of current. If a current I flows through an area S, then current 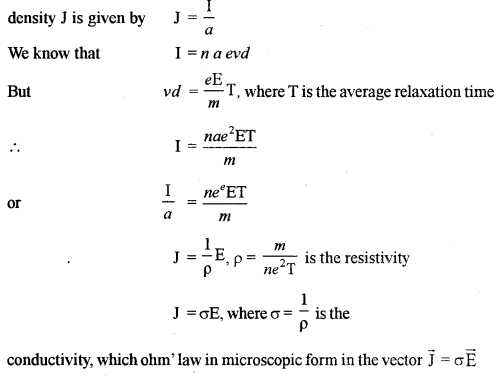 Question 4.
(a) Figure 8 shows two very long conductors PQ and RS kept parallel to each other in vacuum at a distance of 20 cm. They carry currents of 5 A and 15 A, respectively, in the same direction, as shown. Find the resultant magnetic flux density BR at a point M which lies exactly midway between PQ and RS. [3] 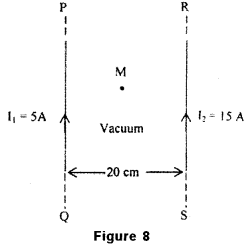 (b) With the help of a neatly drawn labelled diagram, prove that the magnitude of motional emf ‘e’ is given by e = Blv, where l is the length of a metallic rod and ‘v’ is the velocity’ with which it is pulled in a transverse magnetic field ‘B; [3]

(c) Plot a labelled graph showing variation in impedance Z of a series LCR circuit with frequency f of alternating emf applied to it. What is the minimum value of this impedance ? [3]
Answer: 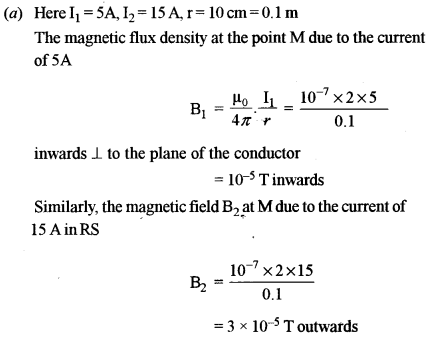 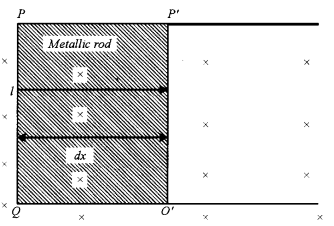 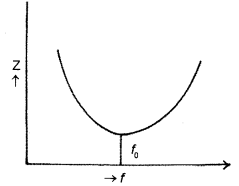 Question 5.
(a) On the basis of Huygens’s wave theory, show that when light is incident on a plane mirror obliquely, angle of reflection is equal to angle of incidence. [3]

(b) (i) What is a continuous emission spectrum ? Name one source of light which produces such a spectrum.
(ii) Explain in brief why dark lines are observed in the solar spectrum. [3]

Answer.
(a) In the fig. is shown a wave front AB on a reflection surface. According to Huygens’s wave theory every point on the wave front is a source of secondary wavelets which travel in all directions with the velocity of light in the medium. The forward, locus of the secondary wavelets gives us the position of the reflected wave front. In the fig, the wavelets from B strike XY at A’ such that BA’ = c × t. With A as center and radius ct, draw an arc AB’ = ct. From A, draw a tangent to this arc to meet it at B’. Then A’B’ is the reflected wave front. Produce the ray forwards to meet XY at P. From P, draw PD’ and PN ⊥ B’A’ and BA’ respectively. Then A’B’ will be a true reflected wave front of 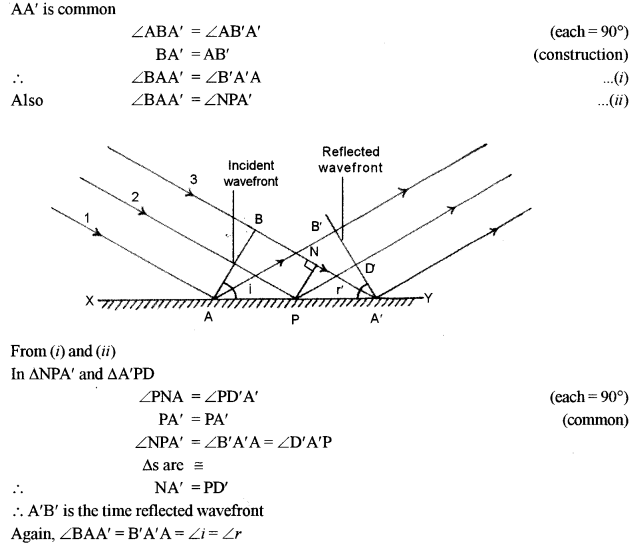 (b) (i) Continuous emission spectra : This spectrum is emitted by incandescent solids or by dense luminous gases heated to a high temperature. It consists of a number of continuous, unbroken bands of colors ranging from red to violet. There is no discontinuity or gap. It consists of all the wavelengths from one end to the other end. The intensity of a band is maximum at one end and then goes on decreasing. Since there is no demarcation between different colors it is called a continuous spectrum.
(ii) The interior of the sun is at a very high temperature of the order of 1070C and emits a continuous spectrum. In the chromosphere certain elements are present. These elements, in accordance with Kirchhoff’s law absorb those very radiations which they are capable of emitting when they are heated. Corresponding to these elements dark lines appear in the solar spectrum. Thus dark line helps us to identify the element present in the chromosphere.

(c) According to lens maker’s formula 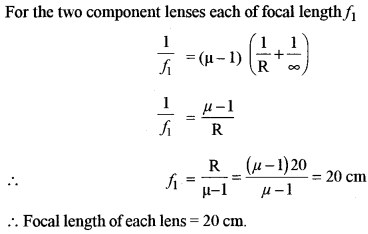 Question 6. .
(a) An illuminated point object O is kept 20 cm from a thin convex lens L1 of focal length 15 cm as shown below. A thin diverging lens L2 of focal length 25 cm is kept co-axial with the first lens and 3 5 cm from it, as shown in Figure 10.

Find the position of the final image formed by this combination of lenses. [4]

(b) (i) What are coherent sources ? [2]
(ii) In Young’s double slit experiment, what is the path difference between the two light waves forming 5th bright band (fringe) on the screen ?

(c) State one similarity and one difference between interference of light and diffraction of light. [2]
Answer: 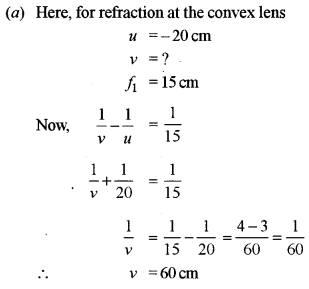 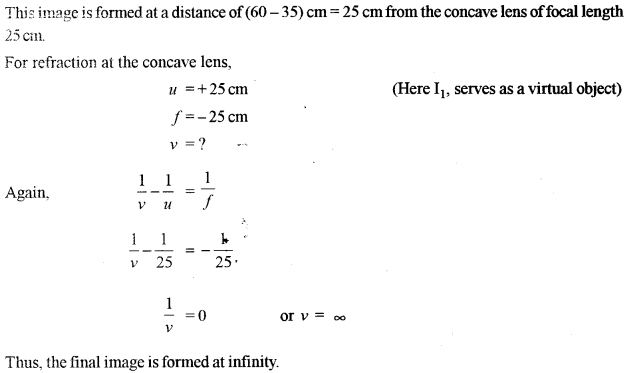 (b) (i) Coherent sources are sources which emit light of the same frequency, wavelength, amplitude and of the same phase or a constant phase difference. These sources are usually derived from the same source.
(ii) For bright fringes we know that
p =nλ = 5λ

(c) in both the interference and diffraction, alternate dark and bright regions are formed due to the superposition of waves. In interference, two coherent sources are required. Diffraction is interference between the light waves starting from the two halves of a single wave front.

Question 7.
(a) A ray EF of monochromatic light is incident on the refracting surface AB of a regular glass prism (refractive index = 1.5) at an angle of incidence of i = 55° (Figure 11). If it emerges through the adjacent face AC, calculate the angle of emergence ‘e’. [3]

(b) (i) In case of polarized light, what is meant by the ‘plane of polarization’ ? [2]
(ii) Find refractive index of glass if its polarizing angle is 60°.

(c) (i) Explain the statement: “Angular magnification of a compound microscope in normal use is 30.” [3]
(ii) State how the resolving power of an astronomical telescope can be increased.
Answer: 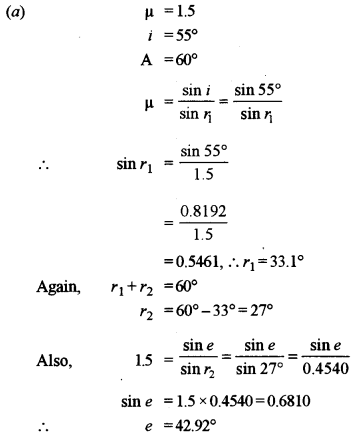 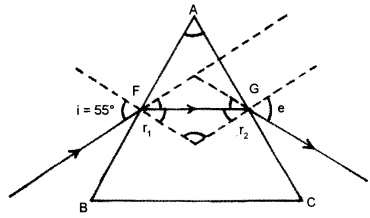 Question 8.
(a) In Millikan’s oil drop experiment, the two plates are 2 cm apart. When a potential difference of 2355 V is applied between them, an oil drop of radius 1 pm is found to remain suspended. Calculate the number of excess electrons on the drop. [3]
[Density of oil = 900 kg / m3 Density of air may be ignored] 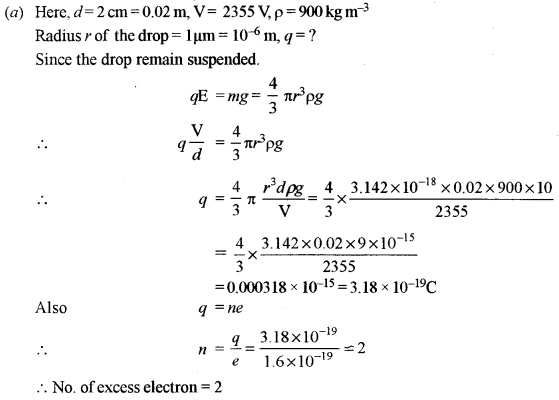 (b) The necessary connections are as shown :

Question 9.
(a) Starting with \(N=N_{0} \mathrm{e}^{-\lambda t}\) obtain a relation between disintegration constant ‘λ’ of a radioactive element and its half life (T). Various terms have their usual meaning. [2] 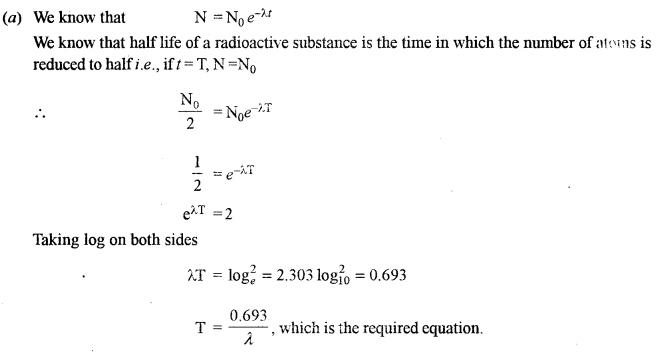 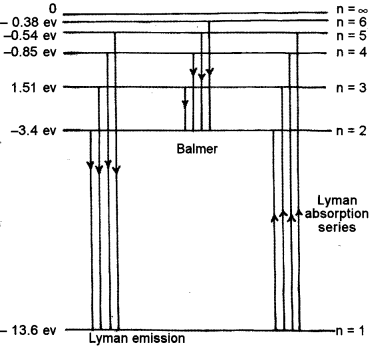 Question 10.
(a) Draw a labelled diagram of a common emitter amplifier. What is the phase angle between the input and output voltages ? [3]
(b) Threshold wavelength of a certain metal is 792 nm. What is the maximum kinetic energy of photo-electrons emitted by this metal if it is exposed to ultraviolet light of wavelength 396 nm? [3]
(c) The following combination of gates acts as a logic gate. With the help of a truth table, find out which logic gate the combination represents : [2] 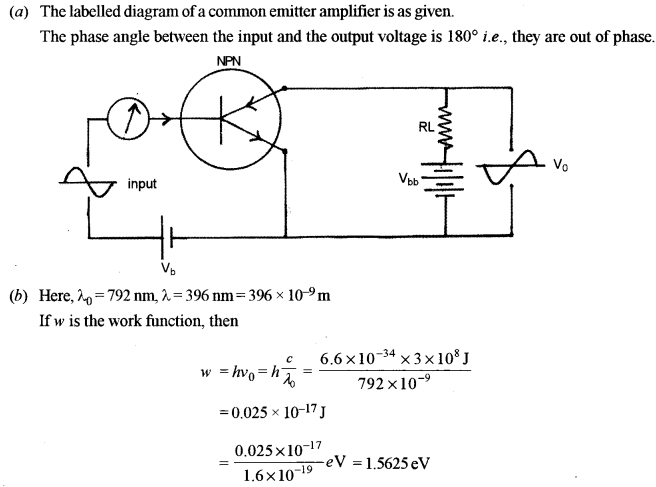 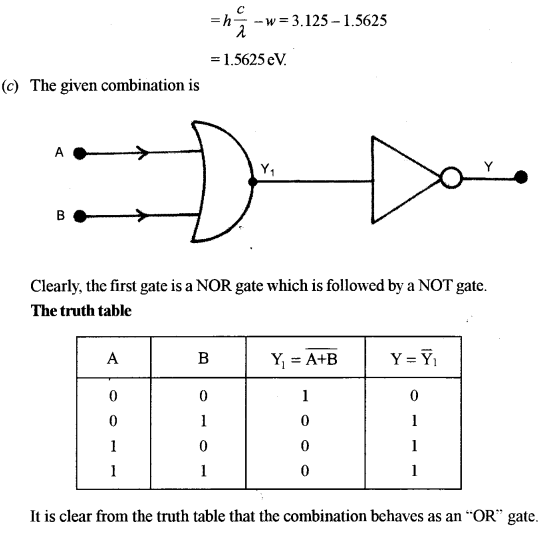