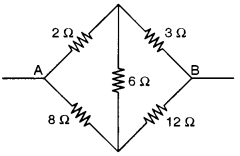 (v) The particles which cannot be accelerated by a cyclotron or a Van de Graff generator are :
(a) Alpha particles
(b) Beta particles
(c) Neutrons
(d) Protons [15]

(B) Answer all questions given below briefly and to the point:
(i) A large hollow metallic sphere has a positive charge of 35.4 μC at its center. Find how much electric flux emanates from the sphere.

(iii) Name any one instrument which works on the principle of tangent law in magnetism.

(v) Alternating current flowing through a certain electrical device leads over the potential difference across it by 90°. State whether this device is a resistor, capacitor or an inductor.

(vi) What is the shape of the wave front diverging from a point source of light ?

(vii) The critical angle for a given transparent medium and air is ic. A ray of light travelling in air is incident on this transparent medium at an angle of incidence equal to the polarising angle ip. What is the relation between the two angles ic and ip ?

(viii) Find the focal length and nature of a lens whose optical power is – 5D.

(ix) What is Modulation ? Explain in brief.

(x) What are the dark lines seen in the solar spectrum called ?

(xi) What is the relation between wavelength and momentum of moving particles ?

(xii) Name the series of lines in the hydrogen spectrum which lies in the ultra-violet region.

(xiv) Give an example where energy is converted into matter.

(iv) The SI unit of magnetic dipole moment is Coulomb-meter (Cm).
(v) The device is a capacitor.
(vi) Spherical.
(vii) If ip is the polarising angle and n the refractive index of the medium, then n = tan ip If ic is the critical angle,then

(ix) The audio signal cannot be transmitted efficiently as such. Modulation is the process of modifying some characteristic of a high frequency carrier wave (amplitude, frequency or phase) in accordance with the instantaneous value of the amplitude of modulating signal. The modulating signal is then transmitted across space.

(xi) The required relation is λ = h/p where λ = wavelength and p the momentum of the particle and h = Planck’s constant.

(xii) The series emitted in the hydrogen spectrums in ultra-violet region is called the “Lyman Series.”

(xiv) In pair production. It is materialization of energy.

Part- II
(Answer any six questions in this part, choosing two questions from each of the Sections A, B and C)

Question 2.
(a) (i) Write an expression (derivation not required) for intensity’ of electric field in :
(1) Axial position.
(2) Broad side position of an electric dipole, in terms of its length (2a) dipole moment (p) and distance (r).
(ii) What is the ratio of these two intensities i.e., E1 : E2, for a short electric dipole ? [3] 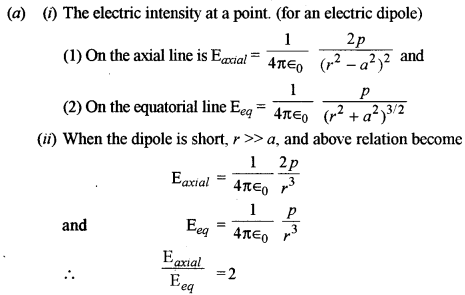 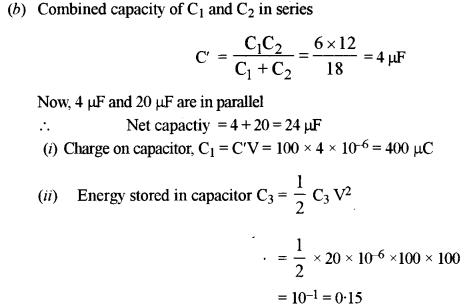 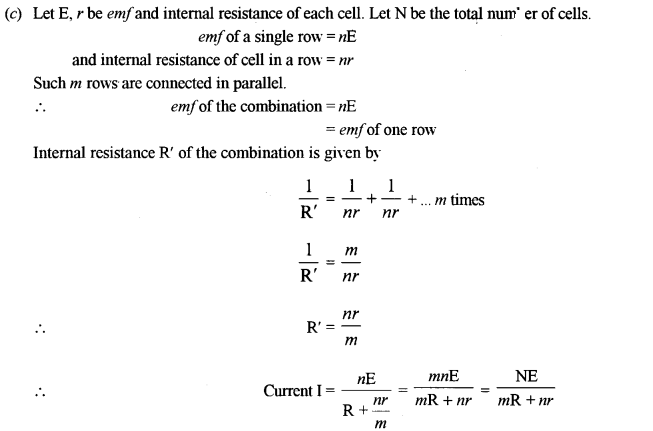 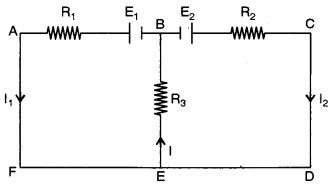 (b) You are provided with one low resistance RL and one high resistance RH and two galvanometers. One galvanometer is to be converted to an ammeter and the other to a voltmeter. Show how you will do this with the help of simple, labelled diagrams. [2]

(c) (i) Plot a labelled graph to show variation of thermo-emf ‘e’ versus temperature difference ‘θ’ between the two junctions of a thermo couple. Mark ‘N’ as neutral temperature and ‘I’ as temperature of inversion.
(ii) What is Peltier effect ? [3]
Answer:
(a) The distribution of current in the given circuit is as given below:
Apply first law at the point E 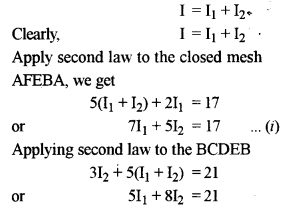 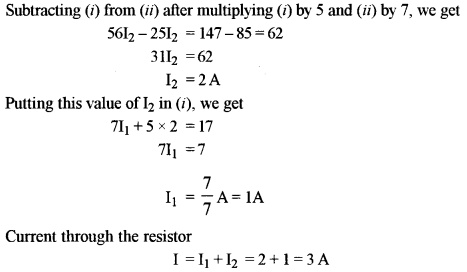 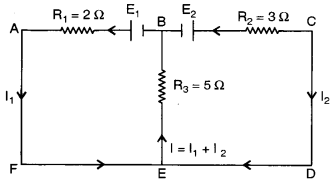 Question 4.
(a) Figure below shows two infinitely long and thin current carrying conductors X and Y kept in vacuum, parallel to each other, at a distance ‘a’. [2]

(i) How much force per unit length acts on the conductor Y due to the current flowing through X ? Write your answer in terms of (μ0/4π), I1, I2 and a.
(Derivation of formula is not required.)
(ii) Define ampere, in terms of force between two current earning conductors.

(b) A metallic rod CD rests on a thick metallic wire PQRS with arms PQ and RS parallel to each other, at a distance l = 40 cm, as shown in figure. A uniform magnetic field B = 0.1 T acts perpendicular to the plane of this paper, pointing inwards (i.e,.. away from the reader). The rod is now made to slide towards right, with a constant velocity of v = 5 0 ms-1. [3]

(i) How much emf is induced between the two ends of the rod CD ?
(ii) What is the direction in which the induced current flows.

(c) (i) Figur below shows a series RCL circuit connected to an ac source which generates an alternating emf of frequency 50 Hz. The readings of the voltmeters V1 and V2 are 80 V and 60 respectively. 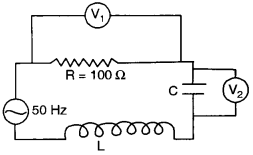 (ii) Definition of Ampere : 1 ampere is that much current which when flowing through each of the two infinitely long conductors separated by 1 m in vacuum results in a force 2 x 10-7 newton per meter length on each of them. 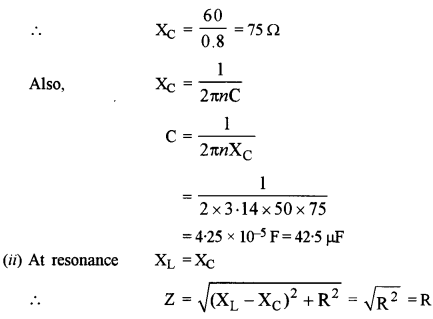 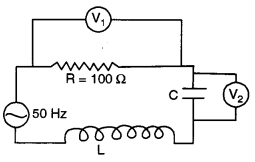 (b) With the help of a labelled diagram, show that fringe separation β in Young’s double slit experiment is given by : [4]
\(\beta=\frac{\lambda \mathrm{D}}{d}\)
where the terms have their usual meaning.

(c) (i) What is the difference between polarised light and unpolarised light based on the direction of electric vector \((\overrightarrow{\mathrm{E}})\) ?
(ii) What will be the effect on the width of the central bright fringe in the diffraction pattern of a single slift if:
(1) Monochromatic light of smaller wavelength is used.
(2) Slit is made narrower. [2]
Answer: 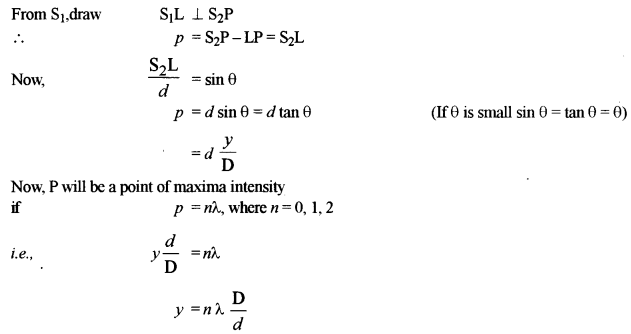 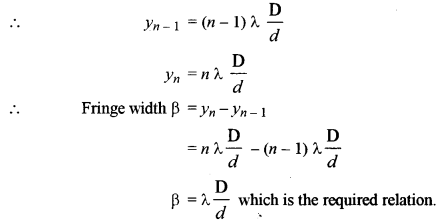 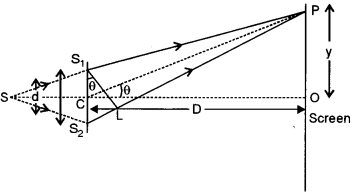 Question 6.
(a) At what angle, a ray of light should be incident on the first face AB of a regular glass prism ABC so that the emergent ray grazes the adjacent face AC ? [3]

(b) A convex lens ‘L’ and a plane mirror ‘M’ are arranged as shown in figure below. Position of object pin ‘O’ is adjusted in such a way that the inverted image ‘I’ formed by the lens mirror combination, coincides with the object pin ‘O’. Explain how and when this happens. [2]

(b) When the object O is at the focus of the lens, the rays after refraction through the lens will be rendered parallel to the principal axis. These rays will strike the mirror normally and will retrace their path giving rise to an image, which will coincide with O as shown.

Consider a thin convex lens XY having R1 and R2 as the radii of curvatures of the two surfaces XP1Y and XP2Y respectively. Let n1 be the refractive index of the medium in which the object O is situated and n2 the refractive index of the material of the lens. The first surface of radius of curvature R1 forms the image of the object O at a distance v’ from the surface XP1Y. This image then serves as a virtual object for the second surface giving rise to a final image at I. For refraction at the first surface, we can write 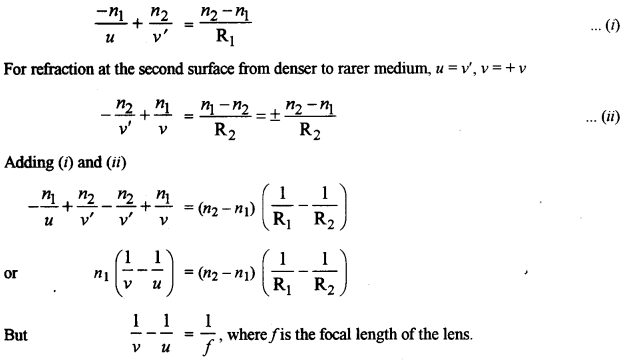 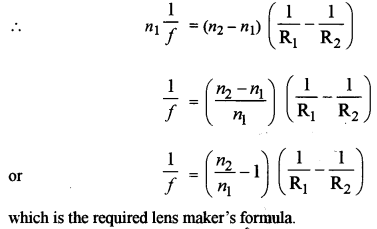 Question 7.
(a) Show that the axial chromatic aberration (fr – fv) for a convex lens is equal to the product of its mean focal length (f) and dispersive power (ω) of its material i.e., Prove : [3]
fr – fv = ωf

(b) Draw a labelled diagram of an image formed by a compound microscope, with the image at least distance of distinct vision. Write any one expression for its magnifying power. [3]

(c) What is meant by long-sightedness ? How can this defect be corrected ? [2]
Answer: 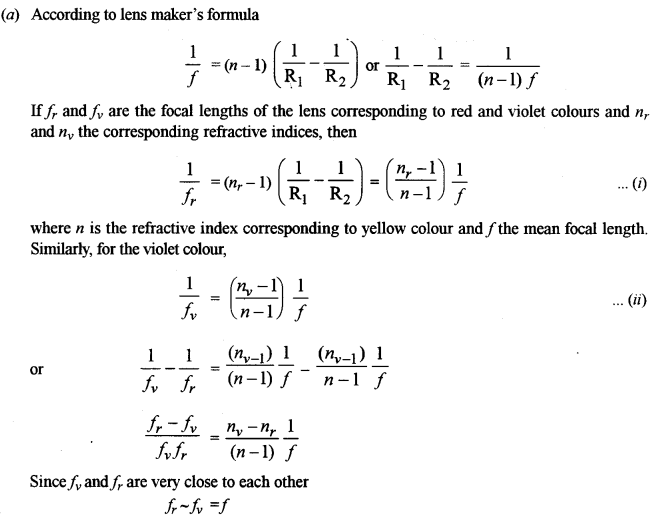 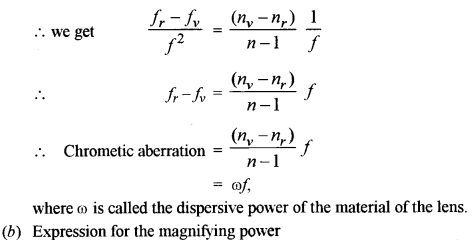 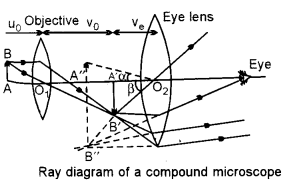 (c) A person suffering from long-sightedness can see clearly far objects but the close objects appear to be blurred. This defect can be corrected by using a convex lens of a proper focal length.

(b) In a photoelectric cell, a retarding potential of 0.5 V is required to block the movement of electrons from the cathode when monochromatic light of wavelength 400 nm is incident on its surface. Find the work function of the material of the cathode. [3]

(c) Name a phenomenon or an experiment which proves : [2]
(i) Particle nature of electromagnetic radiations. [2]
(ii) Wave nature of particles.
(Description of the phenomenon/experiment is not required).
Answer: 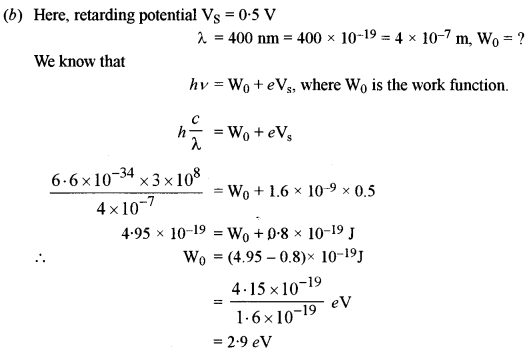 (c) (i) The phenomenon of photoelectric effect proves the particle nature of electromagnetic radiations.
(ii) Davisson-Germer experiment proves the wave nature of particles.

(ii) Total energy of an electron orbiting around the nucleus of an atom is always negative. What is the significance of this ?

(b) (i) Draw a labelled graph showing variation of relative intensity of X-rays versus their wavelength λ. Mark λmin on the graph.
(ii) State how the value of λmin can be varied. [3]

(c) Half life of a certain radioactive substance is 6 hours. If you had 3.2 kg of this substance in the beginning, how much of it will disintegrate in one day ? [2]
Answer.
(a) (i) Postulates of Bohr’s theory:
(1) According to angular momentum postulate, electron can revolve only in those orbits around the nucleus in which its angular momentum is an integral multiple of h/2π
i. e., \(m v r=n \frac{h}{2 \pi}\)

(2) The emission or absorption of energy takes place when an electron jumps from one excited state to the other. If the energy state E2 to the energy state E1, the frequency of the emitted radiation is given by
E2-E1 =hv
(ii) If the total energy of an electron orbiting around the nucleus is – ve, it implies that the electron is not free but is bound to the nucleus. To make the electron, energy must be supplied from an external source. 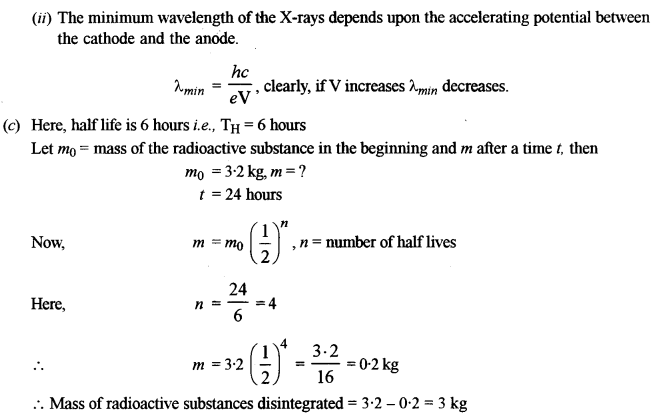 (b) Show by drawing labelled diagrams, the nature of output voltages in case of: [3]
(i) A half wave rectifier.
(ii) A frill wave rectifier. .
(iii) An Amplifier,
(In each case, input is an ac voltage)
Circuit diagrams of these devices are not required.

(c) Identify the logic gate whose truth table is given below and draw its symbol: [2] 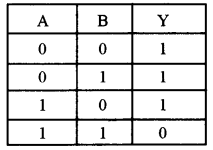 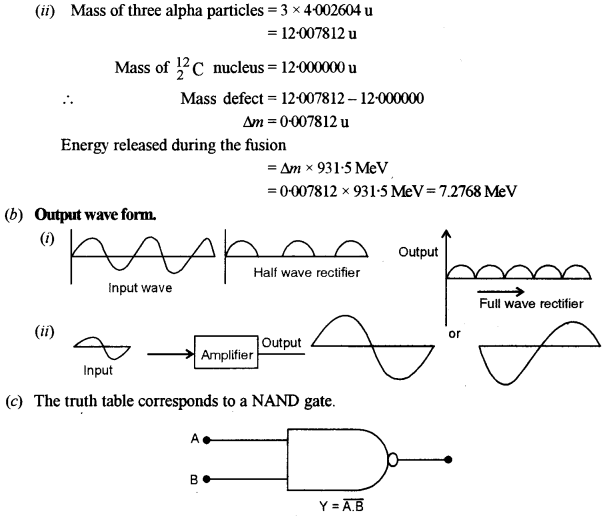