(Candidates are allowed additional 15 minutes for only reading the paper.

Question 1.
(a) Answer the following questions briefly and to the point: [8 × 1]
(i) Give a significant point of difference between Oestrous and Menstrual cycle.
(ii) Give the biological name of the organism causing typhoid.
(iii) If the haploid number of chromosomes in a plant species is 20, how many chromosomes will be present in the cells of the shoot tip?
(iv) Name a plant which flowers every twelve years.
(v) Name the diagnostic test for AIDS.
(vi) Name the terminal stage of ageing in the life cycle of plants.
(vii) Which organisms constitute the last trophic level?
(viii) What is emasculation?

(e) Give a reason for each of the following: [2 × 1]
(i) Pollen grains of wind pollinated flowers are produced in large quantities.
(ii) Equilibrium of a forest ecosystem can be disturbed by uncontrolled hunting of big predators.
Answer:
(a) (i)

(d) (i) Biopatent: It is a legal right given to the owner for a biological discovery.
(ii) Parthenocarpy: Development of fruits without fertilization.

(e) (i) Pollen grains of wind pollinated flowers are produced in large quantities because large number of pollen grains may be wasted on the way. It ensures pollination.
(ii) Equilibrium of a forest ecosystem can be disturbed by uncontrolled hunting of big predators as herbivore population will increase and disturb the food chain.

(i) Possible blood groups of the progeny: A and B
(ii) Alleles involved – IA, IB, 1O

Question 3.
Define life span. Give the life span of an elephant. [2]
Answer:
Life span is the time period from birth to death of an organism.
Life span of Elephant is between 20 – 90 years.

Or
(b) Four measures to control noise pollution:

– Use of better designed, quieter machine industries.
– Noisy industries should be away from residential areas.
– Enforce restriction on the use of loudspeakers and amplifiers.
– Plantation of trees on highways.

Question 6.
Define BOD. What is its significance in an aquatic ecosystem? [2]
Answer:
BOD: (Biological Oxygen Demand) It is the amount of dissolved oxygen needed by aerobic organisms to breakdown organic material present in a given water sample.

Its significance in an aquatic ecosystem is that it indicates water pollution.

Question 7.
Give one significant difference between each of the following pairs : [2]
(a) Humoral immunity and cell-mediated immunity.
(b) Benign tumour and malignant tumour.
Answer:
(a) Humoral immunity:
Consists of B-lymphocytes and is active against viruses and bacterias.

Cell-mediated immunity:
Consists of T-lymphocytes and is active against all pathogens including fungi and protozoa.

(b) Benign tumour:
Non-cancerous and growth rate is slow. 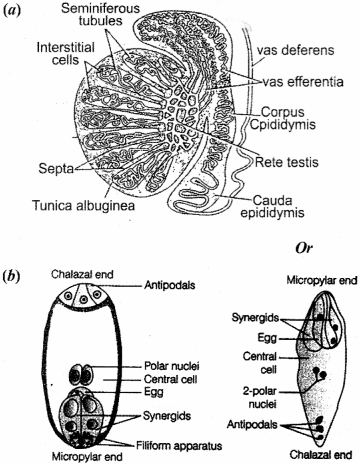 Question 10.
Explain gene therapy, with reference to treatment of SCID. [3]
Answer:
Gene therapy is the correction of genetic defect through genetic engineering or rDT.

Deficiency of adenosine deaminase causes SCID in which patient lacks T cells and B cells. The cells from the bone marrow of the patient are cultured outside the body. The functional ADA gene is transferred into these cells through retrovirus vector.

The transformed cells are transferred to the patient back. The T cells and B cells appear in the blood. It is effective in embryonic condition. After birth it has to be done repeatedly.

Question 11.
Study the table given below. Do not copy the table, but write the answers in the correct order. [3]

Question 12.
Explain industrial melanism. [3]
Answer:
Two varieties of peppered moth were seen. Biston betularia grey coloured and Biston carbonaria black coloured. Before industrialization number of grey variety was more. After industrialization number of black variety increased. Due to pollution lichens disappeared and the tree became dark. The black variety got advantage through camouflage and were saved by the attack of predator birds. This showed natural selection of the black coloured moths.

The explants are selected and sterilised. These are then placed in culture medium. Incubation under ideal, sterile and aseptic condition is done. Callus formation takes place. Auxins are added for cell differentiation. Organogenesis occurs and plantlets are generated. Hardening of plantlets are done and then in the end they are transferred in the soil.

Question 15.
(a) Define the following: [3]
(i) Hotspots
(ii) Ramsar Sites
(iii) Red data book
Or
(b) Define the following:
(i) Biodiversity
(ii) Eutrophication
(iii) PAR
Answer:
(a) (i) Hotspots : A region with high level of endemic species. An area rich in biodiversity.
(ii) Ramsar sites: These are the wetland areas of biodiversity.
(iii) Red Data book: A book containing a list of endangered species.
Or
(b) (i) Biodiversity: It is the degree of variation of life forms.
(ii) Eutrophication: The process of accumulation of inorganic nutrients in an aquatic ecosystem.
(iii) PAR : Photosynthetically Active Radiation is the wavelength of light available for photosynthesis.

Question 16.
(a) Describe post transcriptional processing of RNA in eukaryotes. [5]
Or
(b) Describe Avery, McLeod and McCarty’s experiment. State its significance.
Answer:
(a) Post transcriptional processing of RNA in eukaryotes:
It is the changes in the primary transcript (hnRNA) to mature or functional mRNA.
The processing is as follows:
Capping : It is done with methylguanosine.
Tailing / Poly-A tail: It is the addition of adenylate residues at 3′ end.
Splicing : In this removing of introns and joining of exons take place.
Capping and tailing : It prevents degradation of mRNA.
Or
(b) Avery, McLeod and McCarty’s experiment:
From heat-killed S strain bacteria, extraction and purification of proteins, DNA and RNA, etc., is done.

The extract was treated with protease, RNAse and DNAse. DNAs treated extract did not kill mice. Protease killed mice. RNAse killed the mice.

This proved that DNA is the genetic material.

Significance:
Hereditary material can be extracted from one organism and introduced into another (transformation).

Question 17.
(a) Write a short note on Chipko Movement. [5]
Or
(b) Write a short note on Joint forest management.
Answer:
(a) Chipko movement is related to forest conservation. The villages in Gharwal started this movement. Sunderlal Bahuguna, Amrita Devi etc., were the leaders for this movement and it gained momentum under their guidance. The aim was to protect the trees from cutting and felling. The people in great number hugged the trees so as to protect them from cutting. They embraced the trees. Chipko means embrace. This movement prevented contractors from cutting the trees. This became a turning point in the history of eco development. Many people lost their lives in this movement. This movement encouraged planting of trees for timber, food, shelter and making villages self-sufficient.
Or
(b) Joint forest management was established by Government of India. It involves both the state forest department and local rural communities. Currently a large forest areas are under them. The rural communities protect the forest from fire, grazing, illegal harvesting and poaching. In return forest department provides non-timber forest products and share of revenue from the sale. It gives employment to the villagers. The products offered gums, resins and medicines to the villagers. This management avoids human tribal conflict.

Question 18.
(a) What does PCR stand for? Describe the different steps of PCR. [5]
Or
(b) Give an account of the Blue-White Method of selection of recombinants.
Answer:
(a) PCR stands for Polymerase Chain Reaction or gene amplification is the method of making multiple copies of the gene of interest using oligonucleotides and DNA polymerase.

Different steps of PCR are as follows:
(i) Denaturation : The target DNA is heated to a high temperature of 94° — 96°C. This results in the separation of two strands. Each strand serves as a template for DNA synthesis.
(ii) Annealing: The two oligonucleotide primers are hybridized or annealed to each single-stranded DNA following rule of complementarity. It is caused at low temperature of 40° – 60°C.
(iii) Extension (Polymerisation) : With the help of Tag DNA polymerase, the DNA is synthesized the primers using dNTPs and magnesium ions. The temperature is 72°C.
(iv) The newly synthesized DNA is subjected to same procedure to double the DNA content from the previous cycle.

(b) The Blue-White Method of selection of recombinants:
Based on insertional inactivation the foreign gene is inserted into Lac Z gene coding for Beta-galactosidase enzyme which are used as selectable markers. The Beta-galactosidase converts colourless substrate (X gel) into blue coloured product. In transformed hosts, Lac Z is activated due to insertion of foreign DNA. Non-transformed colonies convert colourless X gel (chromogenic substrate) into blue coloured product. The transformed colonies remain white or colourless. It helps to differentiate between transformant or recombinant and non-transformant or non-recombinant.