Internet Is Boon Or Bane Essay: The internet is a global system of interconnected computer networks that link several billion devices worldwide. It is an international network of networks that consists of millions of private, public, academic, business and government packet switched networks, linked by a broad array of electronic, wireless and optical networking technologies. The internet carries an extensive range of information resources and services, such as applications of world wide web (www), the infrastructure to support email, peer to peer networks for file sharing and telephony.

Below we have given a long essay on Internet Is Boon Or Bane of 500 words is helpful for classes 7, 8, 9 and 10 and Competitive Exam Aspirants. This long essay on the topic is suitable for students of class 7 to class 10, and also for competitive exam aspirants.

Internet can be reckoned as the discovery of man which has revolutionised his style of working and living. It has totally reduced distance, broken all man-made barriers and made our world a small place. It has brought information at our doorstep opening before us what is known as ‘Information Superhighway’ at the click of a button.

The internet didn’t just happen overnight- ather it was the end result of a search that had been in place since the late 1950s. By the time the world started to get online in the mid-1990s, the net had been almost 40 years in the making.

The internet revolutionised the computer and world of communication like never before. The invention of the telegraph, telephone, radio and computer set the stage for this unprecedented integration of capabilities. The internet has a worldwide broadcasting capability, a mechanism for information dissemination, and a medium for collaboration and interaction between individuals and their computers without regard for geographic location.

The internet has changed much in the two-decades since it came into existence. It started as the creation of a small band of dedicated researchers, and has grown to be a commercial success with billions of dollars of annual investments. According to a survey, as of June 2012, over a third of world’s human population have used the services of the internet. This made Bill Gate say

It is changing to accommodate yet another generation of underlying network technologies with different characteristics and requirements from broadband residential access to satellites. New modes of access and new forms of service will spawn new applications, which in turn will drive further evolution of the net itself.

The internet boom in India has become one of the major contributors of the economic growth of the country. The use of internet has increased more than 11 times in the last seven years. The internet boom has equally affected the metros, the towns and villages. Internet has revolutionised the access of information, telephony, television, sharing ideas among other things. With the strike of a button, all is done. The internet boom in India has also contributed to the generation of employment. The rise in the use of internet has led to the growth of cyber cities, cyber cafes and internet parlours throughout India. With the rise in its popularity in India, there is a need for professionals who would feed the information into the web. Content writing and management, web page designing, internet advertising have become booming sectors within the IT industry in India.

Some of the ways the internet is being used are for finding people, place or information. One can use the directory services to search the phone books of any country together with zip codes. Businesses and potential businesses research their competition over the internet. In education field, school teachers co-ordinate projects with classrooms all over the globe. College students and their families exchange e-mails to facilitate letter writing and keep down the cost of phone calls. Students do researches with the help of their home computers. Moreover, the latest encyclopaedias are available online.

In the field of travel, cities, towns, states and countries are using the web to put up (post) tourist and event information. Travellers find weather information, maps, transportation schedules and tickets, and museum hours online. In marketing and sales, software companies are seen selling software and providing updates via the net. Companies are seen selling products over the net. Online shopping enables people to browse online, choose titles, and pay for stuff over the net. Not just for students, internet is an incredible tool for job finders too. One can distribute his/her resume online to prospective employers.

Furthermore, people are even finding romance on the net. Singles ads and matchmaking sites vie for users. Patients and doctors keep up-to-date with the latest medical findings, share treatment experience, and give one another support in medical problems around the globe. Some practitioners exchange e-mails directly with their patients. Also people do financial research, buy stock, and invest money. Some companies are online and they even trade their own shares. Churches, NGO’s and other community organisations put up pages telling about themselves and inviting new people. With so many varied and extensive usages, Bill Clinton once said

“The internet has become an integral of America’s economic, political and social life.” 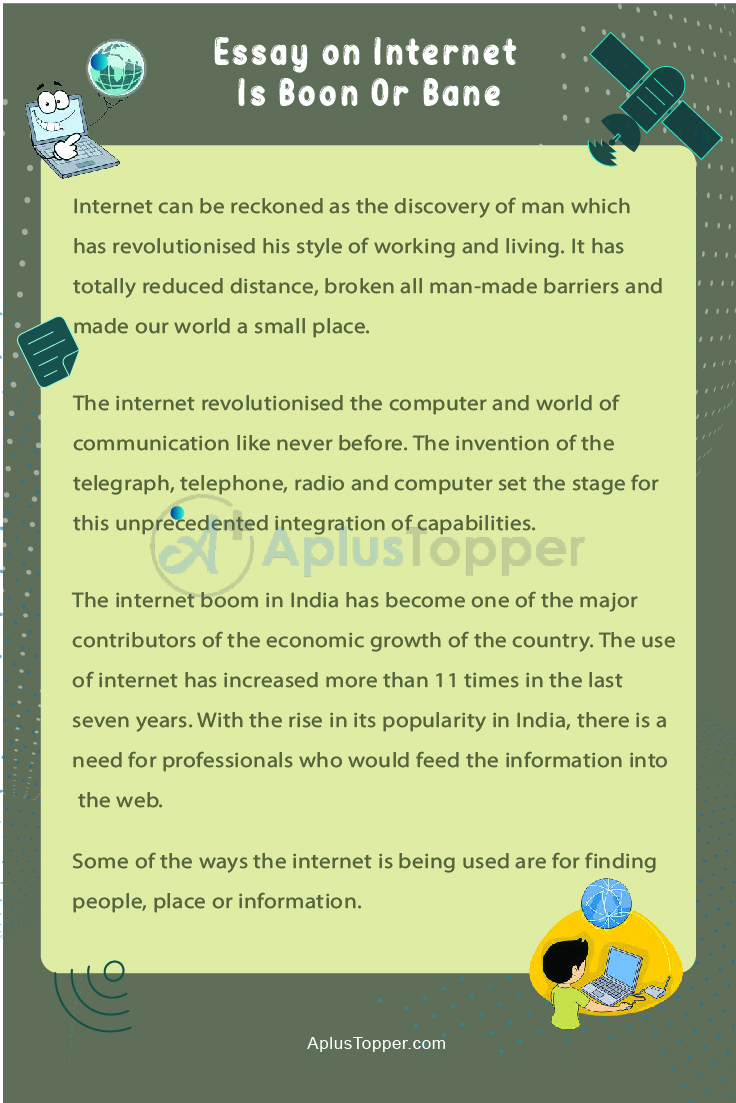 Below we have given a short essay on Internet Is Boon Or Bane is for Classes 1, 2, 3, 4, 5, and 6. This short essay on the topic is suitable for students of class 6 and below.

However the internet boom has some setbacks too which is a threat to the whole humanity. Some people are getting addicted to the internet and thus causing problems to their health. People are also seen wasting a lot of time surfing internet. Internet and television together are adding to the busy lifestyles of people further making them lazy.

Internet hackers are on the rise, creating havoc in the world of business and communication. They are creating a lot of problems by creating viruses, using it for identity theft or even misusing the confidential information of the government. There are a lot of thefts, frauds unscrupulous businesses that have sprung up on the internet to take undue advantage of the innocence of the people.

The problem of pornography is widespread and L thus ruining our youth. Anti-social elements of society like terrorists are also using internet against the humanity. During the times of riots or unrest in a nation, fast spreading information proves difficult to be tackled. Internet is a great tool which man has invented. Its potential is still not fully tapped. More and more uses of Internet are being discovered as days go by. It has made our life easy, comfortable, pleasurable and luxurious. Internet has ushered in the cyber age. However, it is high time that its wrong use and negative impact be minimised. If not put an end to, it will strangle our younger generation and lead them to moral abyss.