Indian National Flag Essay: The Indian Flag is a matter of pride for every Indian living in India or abroad. Most government buildings have the India flag hoisted on the roofs. Flags are also installed at the front of government vehicles. The prime minister raises the national Flag twice every year. It is done on the occasion of Independence Day and Republic Day.

It was only in 2019 that an exception was made, and the prime minister hoisted the Indian Flag for the third time. This was done when he visited the Andaman Islands and paid respects to Netaji Subhash Chandra Bose. The Indian Flag carries a sense of enormous gravity and commands respect from people of all walks of life. Here we have written two essays on the topic for the benefit of students during their exams.

Here we have provided one brief long essay of 500 words, one short essay of 100-150 words, and ten important lines covering the topic.

Indian National Flag Essay has been written for the benefit of students studying in classes 7, 8,9,10 for their exams and other assessments.

Later the Supreme Court of India approved the Indian Flag to be owned by private individuals. The flag code states that the Indian Flag has to be made by Khadi. Khadi is a special handwoven cloth that was popularized by Gandhiji during his call for ‘Swadeshi.’

The Indian Flag is often referred to as the tricolor or the ‘tiranga.’ This is because the Flag consists of three different colors. The saffron in the Indian Flag represents the devotion of the people. This means that the people of this country shall always take their country forward without thinking much about their benefit.

It applies to the people looking after their fellow beings too. Essay on India are supposed to advance towards their future collectively. The white in the middle represents India’s commitment to peace and stability. India shall, on all accounts, not resort to violence and always strive for a peaceful and stable world.

The green at the bottom speaks of India’s connection with soil and nature. It also denotes our country’s progress coming from agriculture and the people who are involved in the primary sector. In the middle of the Indian Flag, there is the wheel of truth. It has twenty-four spikes denoting the twenty-four hours in a day. It also speaks about continuity. India and her people shall be continuous in the efforts for a peaceful, progressive, and powerful nation.

The Flag of India has particular importance in all our lives. We are supposed to stand up when it is hoisted and salute it as a mark of our respect towards it. Our Flag is a part of our identity. Disrespecting and disregarding the national Flag is a grave offense. Apart from being an offense, it also means disrespect on the part of ourselves and the entire nation. The Indian Flag is a part of our national identity. The National Flag fulfills our identity as Indians. Gandhiji conceived the idea about the present nature of the Indian Flag. The upper part is orange in color while the middle is white, and the lower portion is green. The difference only was in the middle.

The Flag of the Congress party had the spinning wheel in the center resembling self -sufficiency through the use of domestic products. The present Indian Flag has the wheel of truth or ‘dharma’ taken from the Ashokan pillar at Sarnath. The orange color in the Flag represents duty, while the white represents peace.

Every Indian is committed to being dutiful towards themselves, their fellow beings, their nation, and the world. Similarly, every Indian is expected to follow Gandhiji’s path of truth and non-violence that leads to the peace and prosperity of the nation and her people. The bottom of the Indian Flag contains the color green.

This color resembles the country’s agricultural economy and the importance of her farmers in making the country a strong and powerful nation in the world. we will soonly update Indian National Flag Essay in Hindi, Urdu, Kannada, Bengali, Marathi and Sanskrit. 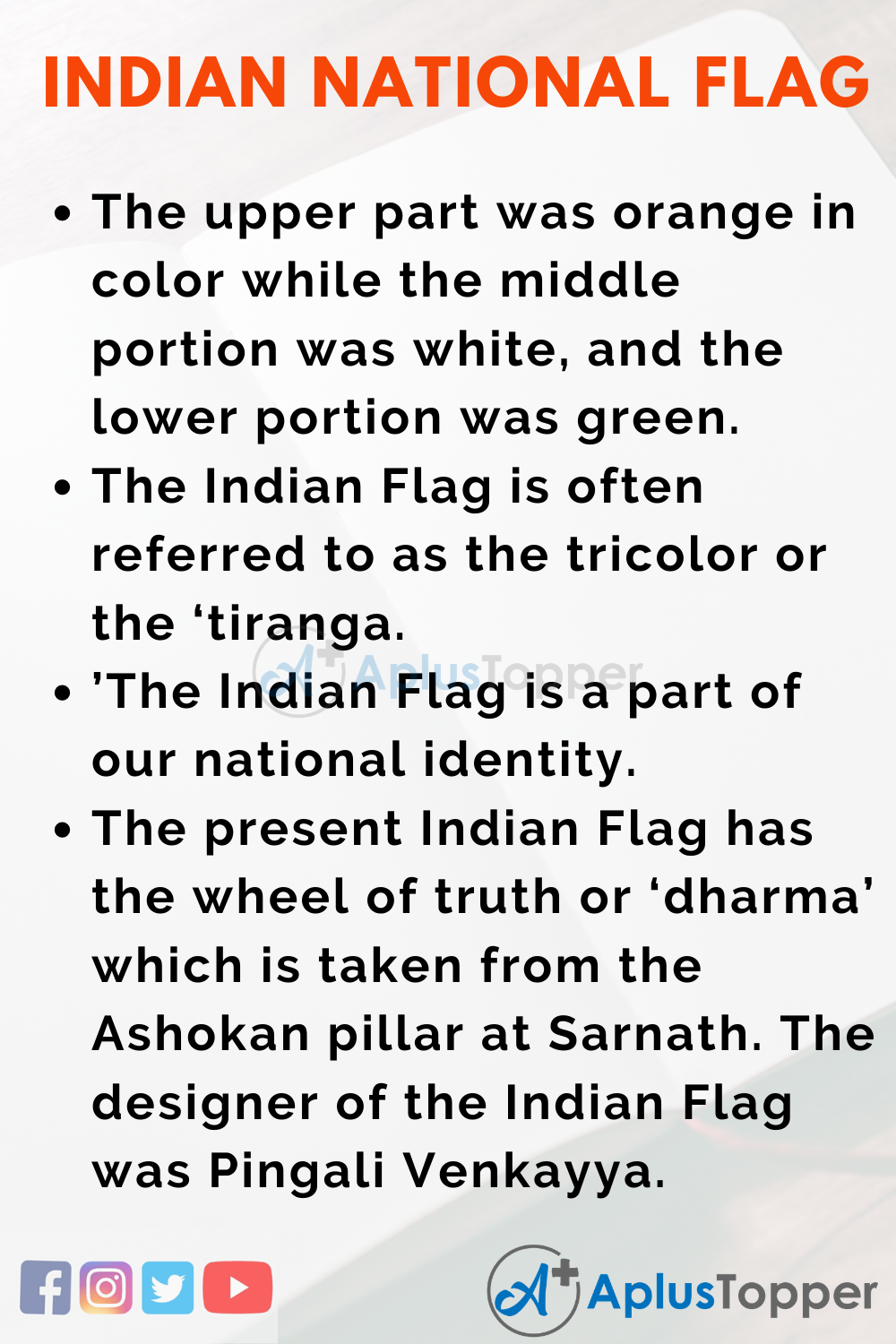 Question 1.
Why is the Indian National Flag the same as that of the Congress party?

Question 2.
What governs the laws related to India’s Flag?

Answer:
The Flag Code of India governs the conduct related to India’s Flag.

Question 3.
What is the Indian Flag made of?

Answer:
India’s Flag is made of khadi or handwoven cloth.