Long Essay on If I Were The Defence Minister! 500 Words for Kids and Students in English

“If wishes were horses,’the beggars would ride,” so runs a proverb. Everybody wishes to be the prime minister or a film hero. Uneasy lies the head that wears the crown. The life of a prime minister may appear to be very luxurious and comfortable but if we take a closer look, it would be obvious that it is not so. Defence minister occupies an important position in the prime minister’s cabinet. I have an earnest desire to find a way for materialising my dreams of becoming the defence minister of the country.

Our country is passing through a critical period. We are still confronted with many problems. So every Indian ought to do his utmost to defend the motherland. We have yet to deal with a few aggresive countries. If ever I get a chance of becoming the defence minister of India, I shall put in my best efforts to make my country strong and prosperous. It would be my first and foremost duty to guard my country from all possible dangers and difficulties. For this purpose, I intend to pursue the following programme.

First of all, I shall raise the strength of the Indian army. Every physically fit young man would be required to join the army for a minimum period. He shall be imparted training on modern patterns. The persons would be fully equipped with modern, automatic and semi-automatic weapons of modern warfare.

Secondly, NCC training would be made mandatory in all the schools and colleges. All the students would be made to realise the importance of such training. They would be encouraged to adopt army as their career after completing their education. I shall popularise the slogan “militarise the nation.” The student-batches would be sent to the villages where they would help illiterate villagers understand the various procedures of civil defence. Those students who show interest in the tasks assigned to them, would be awarded a ‘Certificate of Merit’. When they later seek employment in the defence ministry, they shall be given preference.

Thirdly, besides raising the numerical strength, the whole army would also be equipped with modern weapons. They would be fully trained in the techniques of modern warfare. Automatic and semi-automatic weapons would replace old and obsolete weapons. Many more ordnance factories would be set up in our country. The latest weapons of defence would be manufactured in our country. I shall take concrete steps to achieve self-sufficiency in arms production so that we may not have to depend upon foreign assistance during war time. Self-reliance in defence is the most important function in the entire government. The defence ministry is responsible for resisting foreign aggressions and invasions and I will ensure that it comes up to the mark.

Fourthly, I shall give maximum concessions to Jawans. The Jawans who are on the borders, should not be worried about the fate of their families, in case they sacrifice their lives for their motherland, the bereaved families should not feel rejected by the country. I shall offer them maximum concessions in the form of suitable employment to some of the members of their families, family pensions and handsome cash rewards in certain deserving cases. I would also like to revise the pay scales of the Jawans, especially soldiers who get very meagre salaries. The widows and families of Jawans and officers, who died during the Kargil war, have been given adequate compensations. I shall maintain this tradition. 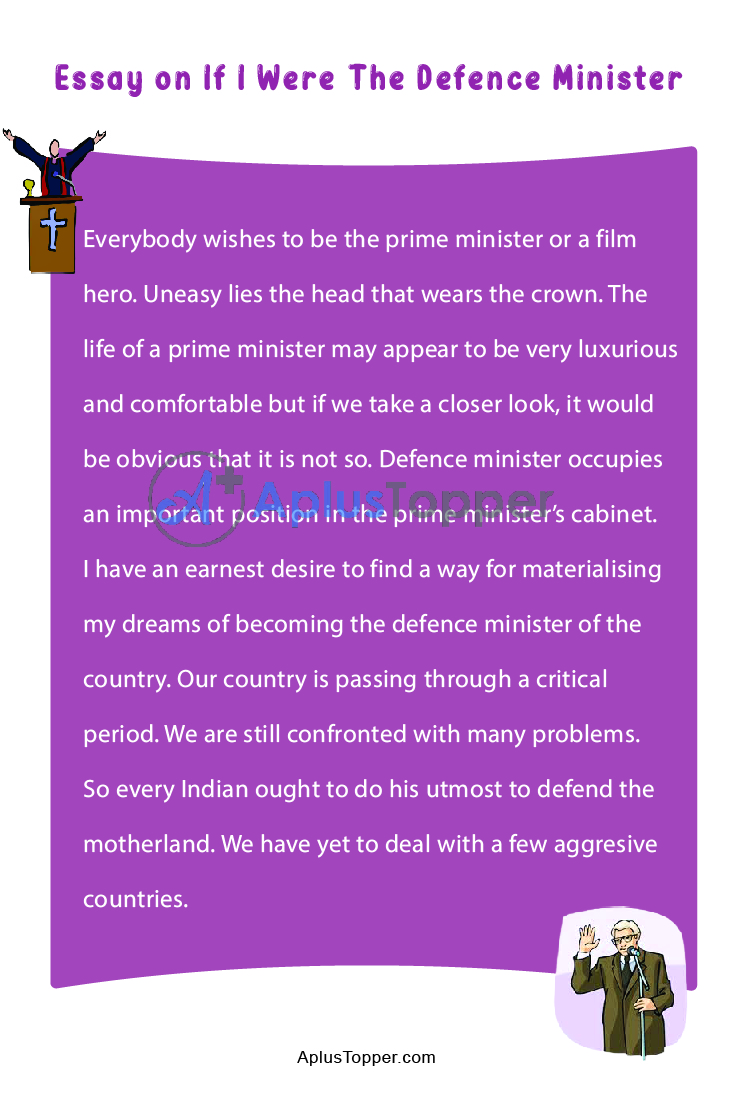 Further, I shall endeavour to give a new look to the defence set-up: For achieving all this, I may have to divert the greater part of the country’s resources to defence. I know that the life of a defence minister is not a bed of roses. I shall consider myself to be the most fortunate person if I am able to find an opportunity that may enable me to achieve my long-cherished dream. I shall make defence ministry the most prestigious and useful organ of the government.