Humanity Essay: The definition of humanity would be as quality of being human; the precise nature of man, through which he is differentiated from other beings. But being human does not necessarily mean that an individual possesses humanity.
If you want to know the quality of humanity in a person take notice of how they do for people who give nothing back in return to the favour they have offered.

We provide children and students with essay samples on a long essay of 500 words and a short essay of 150 words on the topic “Humanity” for reference.

When we talk about humanity, there can be various perspectives to look at it. The most common way to understand humanity is through this simple definition – the value of kindness and compassion towards other beings. When we scroll through the pages of history, we come across lots of acts of cruelty being performed by humans, but at the same time, there are many acts of humanity that have been done by few great people.

The thoughts of such great humanitarian have reached the hearts of many people across this planet. To name a few people, such as them are Mother Teresa, Mahatma Gandhi, and Nelson Mandela. These are just a few names with which most of us are familiar with. By taking Mother Teresa, as an example of a humanitarian, we see that she had dedicated her entire life to serving the poor and needy from a nation who she barely had any relation. She saw the people she served for, as humans, a part of her fraternity.

The great Indian poet, Rabindranath Tagore, expressed his strong beliefs on humanity and religion in his Nobel prize-winning piece, Gitanjali. He believed that to have contact with the divine one has to worship humanity. To serve the needy was equivalent to serving the divine power. Humanity was his soul religion. Their ways of life have taught us and will be teaching the future generation what it means to be a human—the act of giving back and coming to aid the ones in need. Humanity comes from the most selfless act, and the compassion one has.

But as we are progressing as a human race into the future, the very meaning of humanity is slowly being corrupted. An act of humanity should not and can never be performed with thoughts or expectations of any personal gain of any form; may it be fame, money or power.

Now we live in a world that, although it has been divided by borders, it is limitless. People have the freedom to travel anywhere, see and experience, anything and every feeling that ever existed, but we still are not satisfied. Nations fight now and then to attain pieces of land in the name of religion or patriotism, while millions of innocent lives are lost, or their homes are destroyed who are caught in the middle of this meaningless quarrels. The amount of divisiveness caused by human-made factors such as religion, race, nationalism, the socio-economic class is causing humanity to disintegrate slowly.

Humanitarian crisis such as the ones in Yemen, Myanmar and Syria has cost the lives of million people. Yet the situation is still far from being resolved. All it needs to save them is for people all across the globe to come ahead and help them. Humanity is just not limited to humans. It’s also caring for the environment, the nature and every living being in this universe. But most humans are regressing to the point that they don’t even care about their surroundings.

In this era of technology and capitalism, we are in desperate need to spread humanity. The global warming, pollution, extinction of species every day could be controlled if we and the future generation understand the meaning of humanity rather than just subduing ourselves to the rat race. 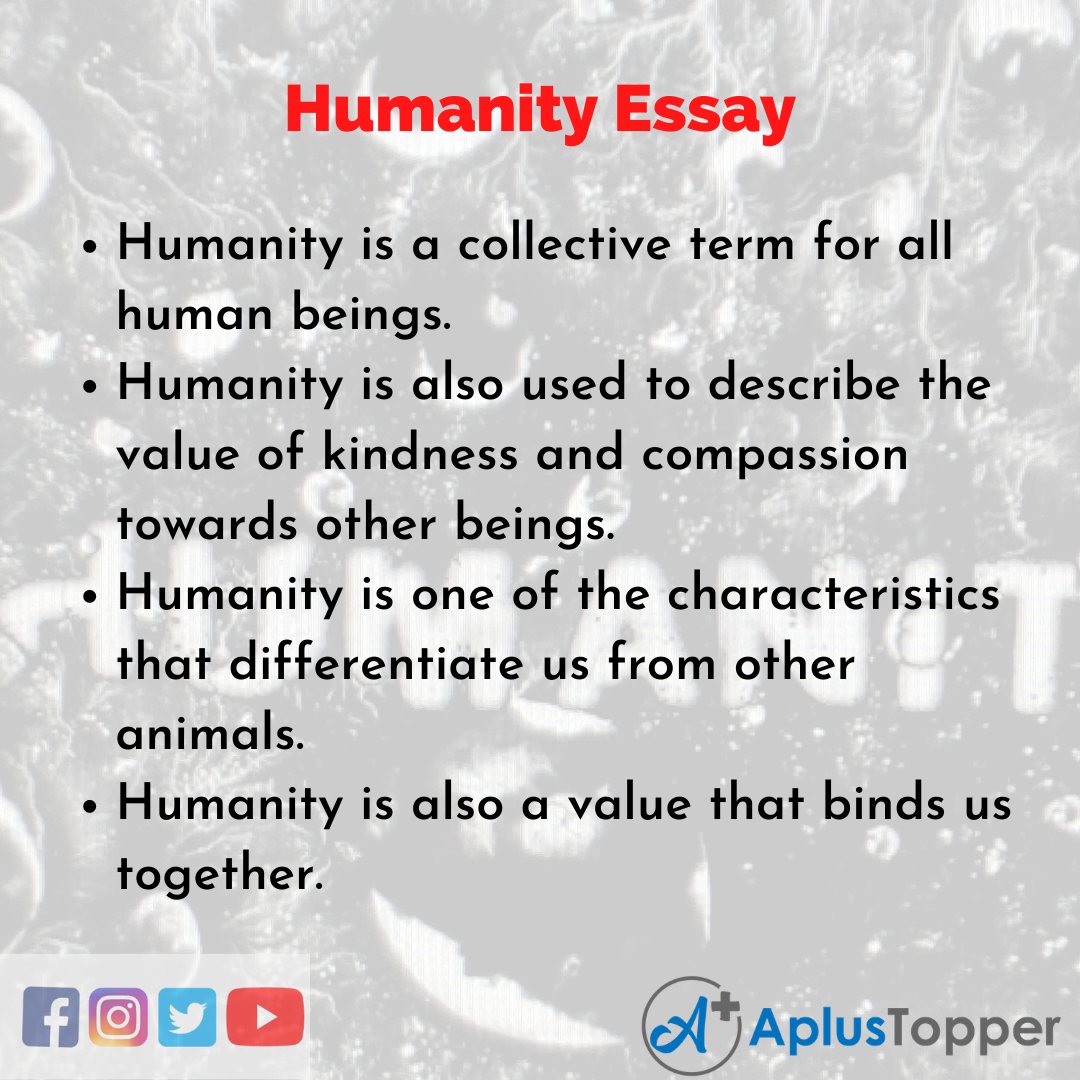 Humanity is an integral part of life which tells that to help other living beings, try to understand others and realize their problems with our perspective and try to help them. For expressing humanity, you don’t need to be a well-off person; everyone can show humanity by helping someone or sharing with them, part of our ration. Every religion in this world tells us about humanity, peace and love.

But humans have always indulged in acts that defy humanity, but we, as a generation, have to rise and strive to live in a world where everybody is living a fair life. And we can attain by acts of humanity. In last I would only say to any religion you belong to be a human first be a human lover strive for humanity as every religion teach us humanity and share your life with others as life is all about living for others and serving humanity that is why “no religion is higher than Humanity.”

10 Lines on Humanity in English 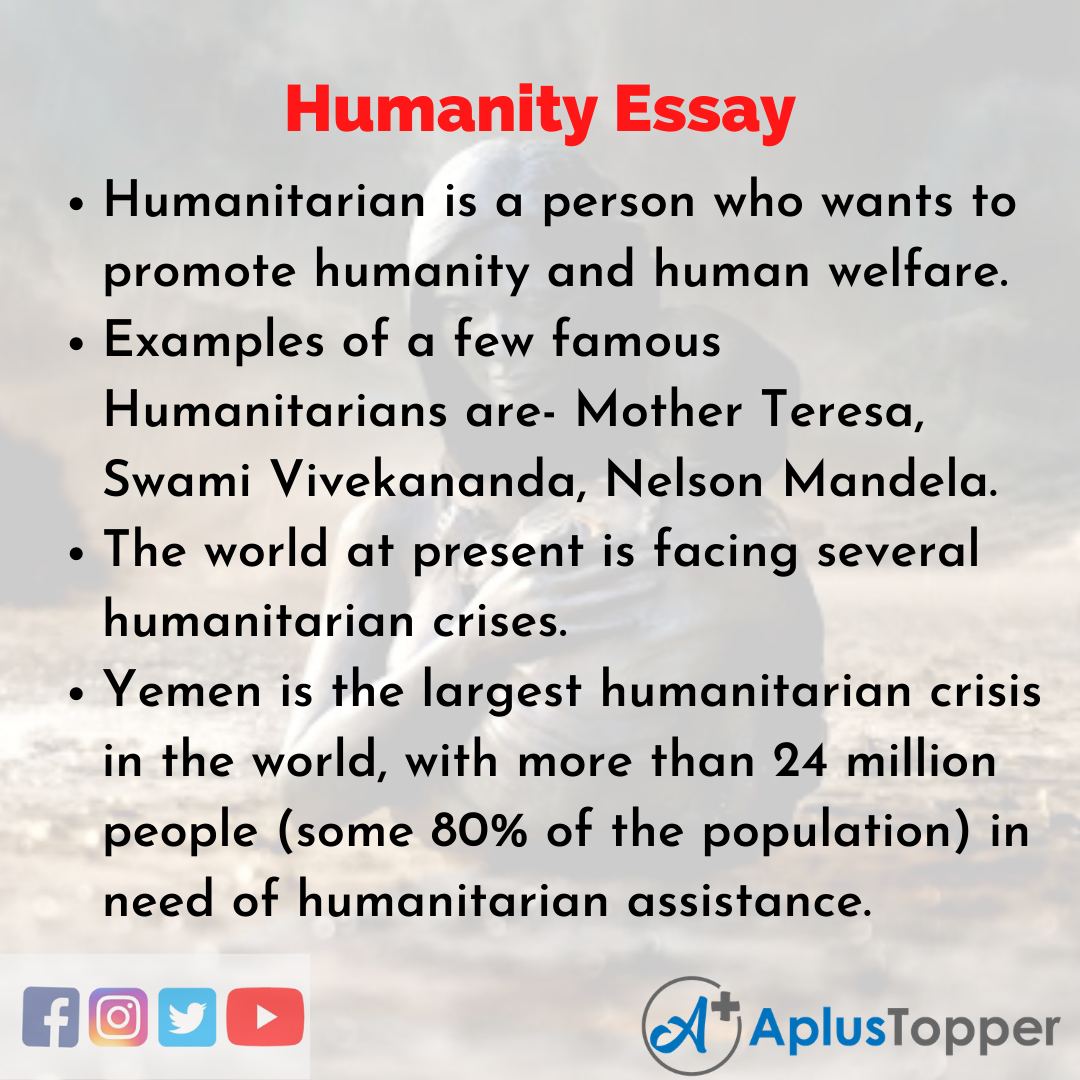 Answer:
The definition of humanity is the entire human race or the characteristics that belong uniquely to human beings, such as kindness, mercy and sympathy.

Question 2.
What are the qualities of humanity?

Answer:
Qualities that form the foundation of all other human qualities are honesty, integrity, wholeheartedness, courage and self-awareness. These factors define who we are as human beings.

Question 3.
How do we show humanity?

Answer:
Some says to show humanity is to model genuine empathy, to show gratitude, and to express respect and humility.