Honour Killing Essay: Honour killing or shame killing is the murder of a family member as the offenders’ belief that the victim has brought dishonour or shame to the family, or has violated the principles set by a community or a religion. Most often, women are the victims of honour killings, where the male family members murder them.

Honour killing is a type of domestic violence practiced within the family. Some countries have put strict laws against the practice. However, justice systems of certain countries by lack of enforcement of existing laws or by explicit provisions don’t exercise the laws against the killing committees in the name of the family’s honor.

We are providing students with essay samples on a long essay of 500 words and a short essay of 150 words on the topic Honour Killing for reference.

Honour killing is the practice of the murder of a member of the family, especially women or girls, as the killing community believes that the victim has brought shame or dishonour to the family. Honour killing has a few typical reasons. Refusal of arrange marriages or forced marriages are often the reason.

Though both men and women are victims of honour killings in certain cultures, there are different standards of code of honour for men and women. For women, stricter standards of virtue are included and duty for men to commit violent acts if demanded of honour.

As the definition of honour killing suggests, it is done to protect the ‘family’s honour’. Family honour is an abstract concept involving the quality of being worthy that is perceived and respectability that affects the social standing. The ideology of family honour is different in different countries.

In male-dominated societies, the activities of women and girls are closely monitored. Women’s virginity is considered to a kind of ‘sexual purity’, and its maintenance is considered to be the responsibility of male members in her life – her father, her brother and finally her husband. Victims that are subjected to honour killing are believed to have been involved in actions that are considered ‘sexually immoral’.

These activities include openly conversing with men, they are not related to or having before marriage or sex outside marriage – even if that includes rape or sexual harassment. Engaging in a homosexual relationship is still not accepted in larger parts of the country.

A woman is targeted for murder for various other reasons such as seeking divorce or separation from her husband even if the relationship is abusive. The mere suspicion that a woman has acted in a way to damage the family’s reputation is enough to trigger an attack on her. Objective truth is not the factors causing these attacks but the general feelings of the male and perceptions.

In certain cases, a man and woman decide to run away from their family because they are in love with each other. Still, their families do not support their marriage as it is inter-caste or inter-religion. In rural parts of India, honour killing due to inter-caste or inter-religious marriages continues to take place. These cases remain legally unreported to the police due to the direct or indirect support from the villagers. Such murders are often ruled as accidents or suicide by the victim when reported.

In India, women are a victim of 97% of honour killing acts. The lack of proper laws against these crimes committed to protecting the ‘honour’ of a family or society results in the crimes being reported under myriad crime which makes it difficult to be tracked.

In the 21st century, international awareness of honour killing has increased. However, some countries remain in understanding the grave offence and take necessary steps to criminalize it. In some countries, the judicial systems fail to put action to the laws against the killing committees, especially to protect the honour of the family in the society. People living in the cultures of honour perceive family to be the central institution of their society. Family honour is a vague concept that is taken seriously to such an extent by some communities that killing another human in the name of ‘honour’ is considered as a matter of pride.

The government of India should have strict laws against the people who not only commit the heinous crime but also support it by hiding it and removing the evidenced or reporting it as suicide. This grave offence needs immediate attention and should be firmly dealt with as people are still losing their lives in the name of ‘honour’.

1. The United Nations estimated that every year 5000 women and girls are being murdered in the name of honour killing.
2. Honour killings are mainly reported in the Middle Eastern and South Asian countries.
3. It also occurs in countries like Brazil, Canada, Italy, Iran, Sweden, Syria, UK, and the US etc.
4. Honour killings can be considered as extreme forms of gendered domestic violence.
5. The absence of reliable data on a country level makes it difficult to ascertain the frequency of honour killings.
6. Pakistan has the highest number of documented honour killings. One-fifth of the world’s honour killings are performed in the country.
7. Many believe Islam to be a reason for honour killings, but the practice has been there since pre-Islamic times.
8. In the cities of Haryana, Amritsar, Uttar Pradesh of India, the maximum number of honour killings take place.
9. The methods of killing are extremely cruel such as beating, burning alive, hanging acid attacks etc.
10. Honour killing is used as a tool to instil fear among the people of society. 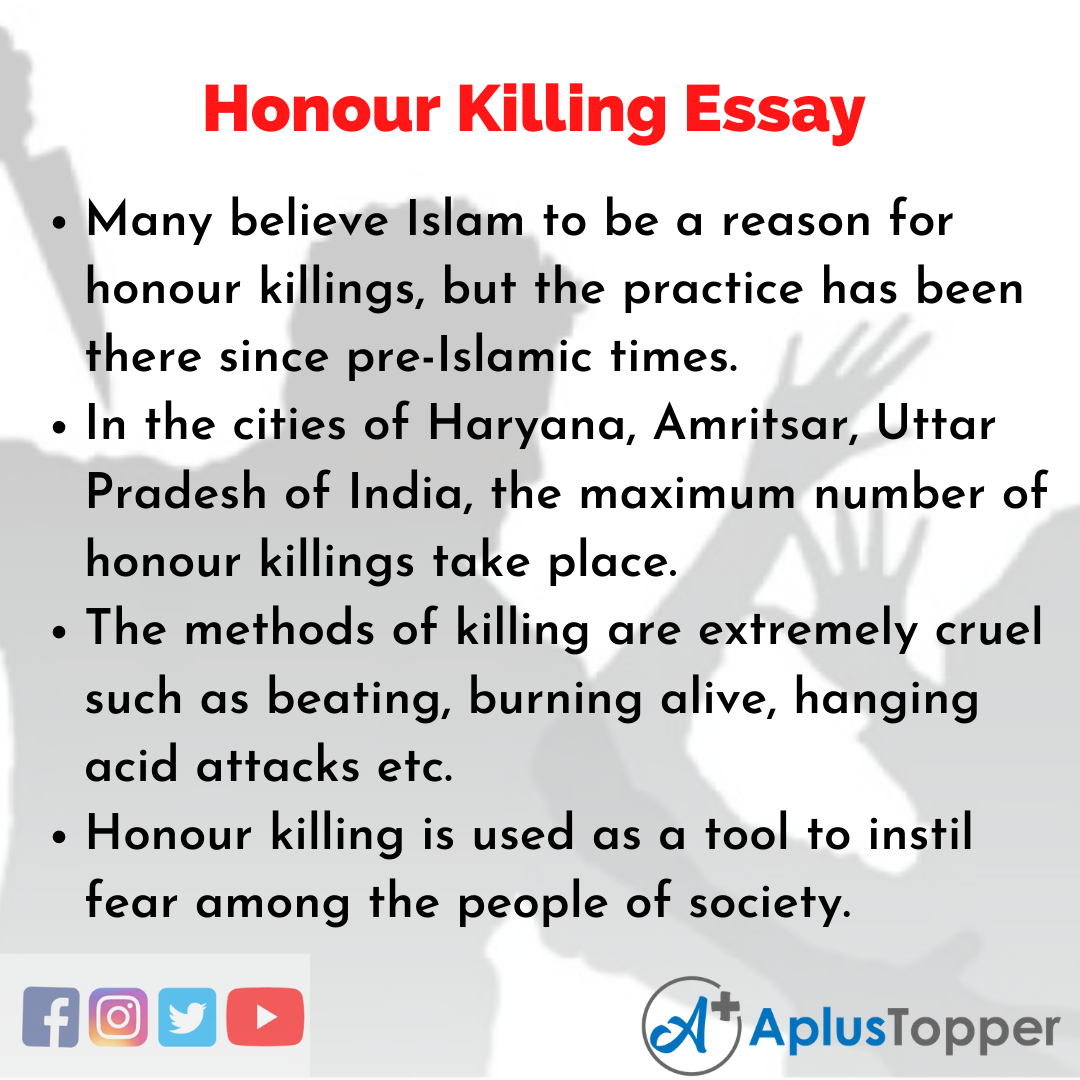 Question 1.
Is honour killing practised in a religion?

Answer:
Honour killing has no religion. Many believe it is an Islamic practise, but it is also practised in non-Islamic countries.

Question 2.
Why are women subjected to honour killings more than men?

Answer:
In patriotic societies, it is believed that the actions of the women are what hold the honour of the family together.

Question 3.
How common are honour killings in the UK?

Answer:
There are 12 – 15 reported cases nationally in the UK.

Answer:
Usually, the male members of the family commit the crime.