Heroism Definition Essay: During tragedy or times of crisis, people either become spectators or step in and make the world a better place. These individuals are often selfless and put their own lives in danger just to save another’s.

To effectively write an essay on heroism, we need to understand the exact meaning. Delving into its etymology, we can understand its roots: The noun “heroism” is derived from the Greek word “heros” which translates to “Demigod”. Traditionally, one of the main characteristics of a hero is their fearlessness and valor. While these two are the main characteristics, there are other defining factors of a hero. Throughout history, there have been people who serve as exemplary characters for countless people, through their acts of courage and determination.

In this article, we shall explore the meaning of heroism, discover Heroism Definition Essays and important writing guidelines for such essays.

Following are a few general guidelines to be followed when drafting an essay. Doing so will help you write a good essay and secure better scores for the same.

The following essays have been drafted based on the above-mentioned guidelines. You can edit or modify the same to suit your preferences:

Times of peril often separate people into two distinct groups – the spectators and the heroes. A spectator, as the name suggests, witnesses an incident and does not take any action – even if the lives of others are at stake. A hero, on the other hand, puts their life on the line just to save others. They do it not because of fortune or fame but for their selflessness. Throughout history, there are many individuals who have risen above and beyond their call of duty. Such individuals have been the pillars of society and also set an exemplary standard for generations to come.

For instance, Captain Vikram Batra was an officer of the Indian Army who laid down his life for our freedom. His sense of patriotism could be traced back to his teenage years, when he told his mother: “Money is not everything in life; I have to do something bigger, something great, something extraordinary for my country.” In fact, he even landed a high-paying job with a Hong-kong based company but he opted to join the army instead. His actions were lauded in a tribute by an Indian Oil print campaign – which read: “Sometimes, an ordinary Indian can make an INR 120,000 crore company feel humble. For every step we take, there’s an inspired Indian leading the way.” During the course of the Kargil War, Vikram was almost always faced with precarious terrain and difficult situations that were never in his favour. Yet, he always went over and above his duties, even when faced with certain death. July 7, 1999, Vikram and his men began their most dangerous mission yet – capture an icy slope called Point 4875, which was located 17,000 feet above sea level. He and his men had to endure extreme snowstorms, blinding fog and icy slopes that were 80 degrees steep.

Regardless, Vikram and his men pushed valiantly, even though a barrage of gunfire and mortars were raining down on them. The mission was almost complete when a junior officer stepped on a mine and injured himself. Vikram fearlessly rushed out from the safety of a bunker to save his fellow soldier. He was even stopped by a subedar, who would go rescue him instead, but brushed him aside and said “You have children, step aside.” Vikram was able to shoot down five enemy soldiers before making his way to his fallen comrade. He quickly dragged the injured man to safety, but he had to expose himself to enemy gunfire in order to save his fallen colleague. In the heat of action, Vikram took a bullet to his chest, which turned out to be fatal.

Valor enables a person to face imminent danger, even if it means death. Heroes are not born, they are created from the most unlikely of situations. In our example, Vikram was a man who put his patriotism before his own life. He, along with countless other soldiers are the real heroes. In conclusion, heroes may not be physically strong, or fast, but what sets them apart from everyone else is their character – valor, selflessness, determination, moral integrity, and more. Sometimes, even an ordinary person has the potential to uncover their heroic side, when the situation calls for it. 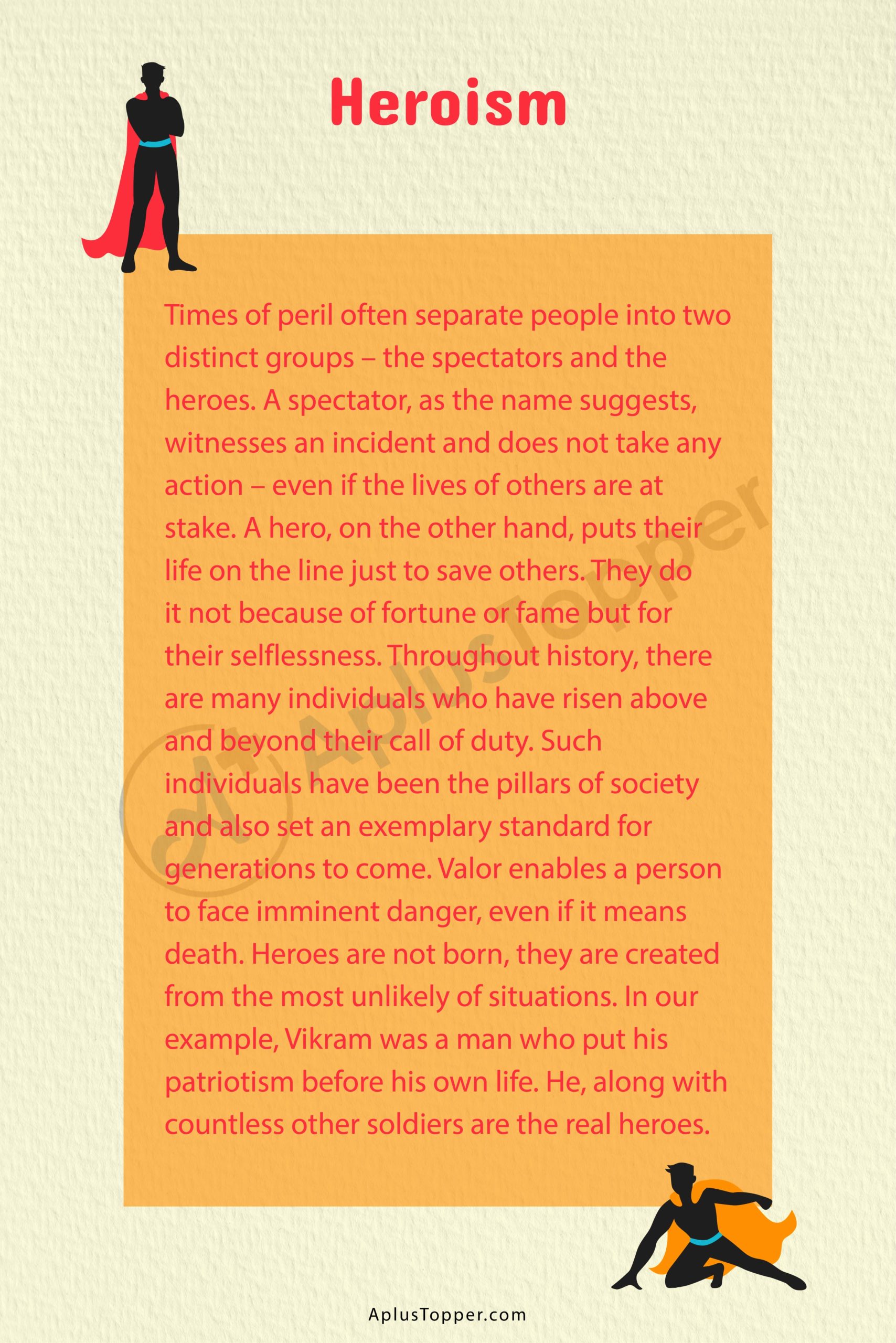 Question 1.
What is the definition of heroism?

Answer:
Heroism is a quality that defines certain individuals. These individuals are often selflessness, showcase determination, moral integrity and are valorant.

Question 2.
What are the qualities of a Hero?

Answer:
A hero has the following qualities: fearlessness, valor, selflessness, determination, moral integrity, tendency to act above and beyond the call of duty.

Question 3.
What is the true meaning of heroism?

Answer:
A hero might be any individual who puts their life on the line just to save others. They might not be physically strong or fast, but they do have the right mindset which can potentially save someone’s life during times of danger. Moreover, they possess certain qualities which are considered to be characteristics of a hero, such as valour, fearlessness, determination, selflessness and a sense of duty.