Green Revolution Essay: The Green Revolution refers to the technological advances in agriculture that changed the way farmers managed their farms. These changes allowed farmers to grow and harvest more crops with less manpower.

Below we have given a long essay on Green Revolution of 600 words is helpful for classes 7, 8, 9 and 10 and Competitive Exam Aspirants. This long essay on the topic is suitable for students of class 7 to class 10, and also for competitive exam aspirants.

The Green Revolution, first coined by William Goud, demonstrated the power and influence that science and technology have over the economic, social and institutional environment within which they operate. Traditional agriculture practices involved few or little inputs, with Mother Nature taking care of the crop. However, at some point in history, an improved method of farming arose; the Green Revolution. This focussed on three interrelated actions.

Firstly, breeding programmes for staple cereals to produce early maturing, day-insensitive and high yielding varieties. Secondly, the organisation and distribution of fertilisers, pesticides and water regulators, and lastly the implementation of these technological innovations.

The Green Revolution describes a rapid increase in the production of crops ranging from wheat to rice. It led to a boom in the agriculture industry. It was the technological response to a worldwide food shortage which became threatening in the period after the World War II.

The beginnings of the Green Revolution are often attributed to Norman Borlaug, an American scientist interested in agriculture. He is known as the ‘Father of the Green Revolution’. He is credited with saving over a billion people from starvation. He developed new disease resistance high-yield varieties of wheat.

By combining his wheat varieties with new mechanised agricultural technologies, Mexico was able to produce more wheat than was needed by its own citizens, leading to its becoming an exporter of wheat by the 1960s. Prior to this, the country was importing almost half of its wheat supply.

In India, the seeds of green revolution were first tested during the drought of 1964-65. M. S. Swaminathan an Indian geneticist, is known as ‘Father of Indian Green Revolution’ for his leadership and success in introducing and further developing high-yielding varieties of wheat in India. These seeds were planted in different soils of Punjab, Delhi, Pusa and Kanpur.

The yield was over 4,000 kg per hectare which was approximately about four times the yield of local varieties. These varieties were then replicated for public cultivation. High yielding varieties programme was introduced in the kharif season of 1 966. States like Punjab, Haryana and Western Uttar Pradesh reaped the benefits of the green revolution in wheat, while production of rice increased in the states of Andhra Pradesh and Tamil Nadu.

There are around twelve components of Green Revolution such as high yielding varieties of seeds (HYV), irrigation – surface and ground, use of chemical fertilisers, insecticides and pesticides, Command Area Development (CAD), land reforms, consolidation of holdings, supply of agricultural credit, electrification of rural areas, construction of roads and markets, farm mechanism and development of agricultural universities.

These components do not work in isolation. Infact it is the consolidated development of all these components that result in the overall development. Green Revolution has influenced Indian Economy to a large extent. One major problem lies in the fact that the revolution did not spread evenly to all the parts of the country.

With the use of mechanised and scientific methods in farming, industries too sprang up. Tractors, harvesters, threshers, electrical motors, diesel engines, pumps etc began to be manufactured on a large scale. Besides demands for pesticides, fertilisers, insecticides increased the number of fertiliser plants in the country. Consequently, there were increased employment opportunities, especially in the rural areas.

Even though, Green Revolution turned out to be a unique event in the history of Independent India by resolving the problems of hunger, famine and starvation, yet it had certain demerits. Green Revolution has greatly profited the rich farmers but has failed to profit the smaller ones. Rather the income gap between the rich, marginal and small farmers has increased. Moreover, not all parts of the country were benefitted. All the crops could not reap the benefits of green revolution except rice and wjjeat. Moreover, the revolution took off with a great start but it could not sustain its growth rate and productivity rate over the subsequent years.

The green revolution had some disadvantages too. It led to a change in dietary habits, as fewer people were affected by hunger and died from starvation, many were affected by malnutrition such as iron or vitamin-A deficiencies. Nutritional content of the products thus yielded were questioned. Also the consumption of the pesticides used to kill pests by humans in some cases may have increased the likelihood of cancer. Poor farming practices including non-compliance to usage of masks and over-usage of the chemicals compounded this situation.

There are varying opinions about the effect of the green revolution on wild biodiversity. Land degradation and soil nutrients depletion have forced farmers to clear up formerly forested areas in order to keep up with production. Moreover, most high intensity agricultural production is highly reliant on non-renewable resources. Agricultural machinery and transport, as well as the production of pesticides and nitrates all depend on fossil fuels. The essential mineral nutrient phosphorus is often a limiting factor in crop cultivation, while the phosphorus mines are rapidly being depleted worldwide. The failure to depart from these non-sustainable agricultural production methods could potentially lead to a large scale collapse of the current system of intensive food production within this century. 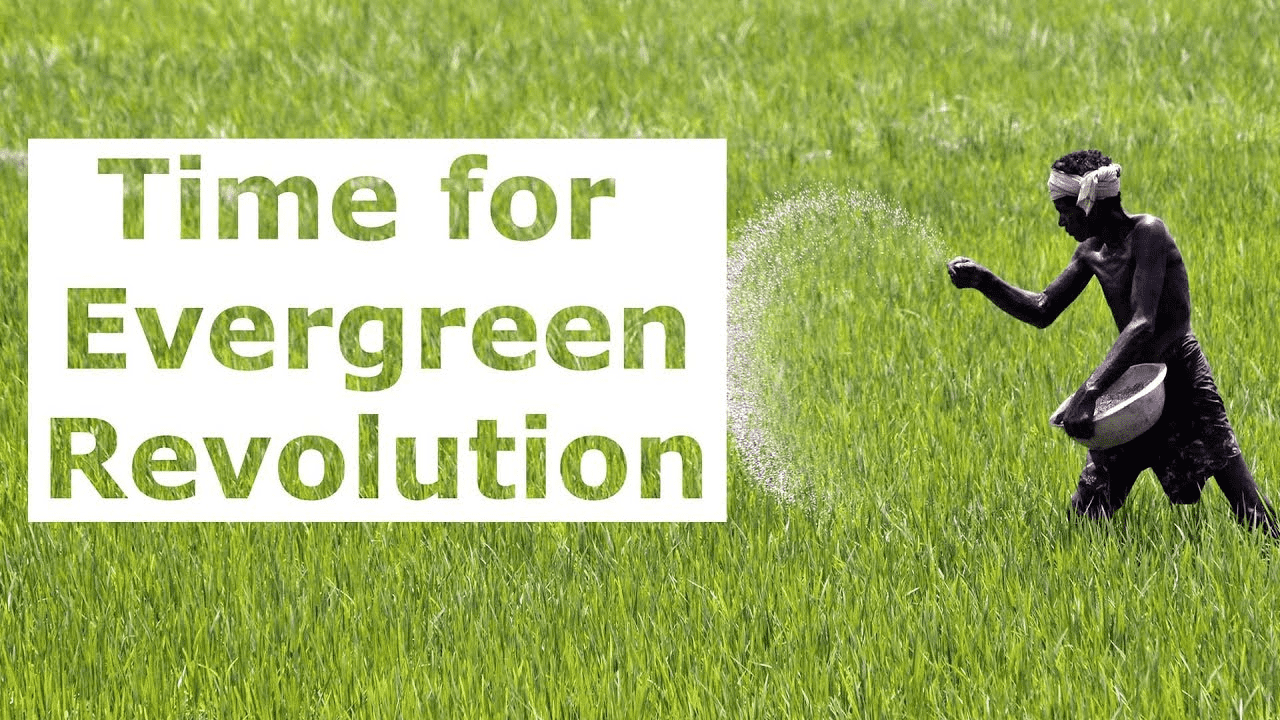 Below we have given a short essay on Green Revolution is for Classes 1, 2, 3, 4, 5 and 6. This short essay on the topic is suitable for students of class 6 and below.