Free Will Vs Determinism Essay: Free will is a term of philosophy that determines the ability to have a rational choice to choose a specific type of action.

Doing things with free will is to justify and get ready to have the responsibility. The principle of determinism states that there established positions of determinism.

We provide the students with essay samples on a long Free Will Vs. Determinism Essay of 500 words and a short essay of 150 words on the same topic for reference.

Long Essay on Free Will Vs Determinism 500 Words in English

Under the rapid development and urbanization, a person obviously can build machines. Still, in every case, our freedom is limited by physical reality and the laws of nature – and a strong binding force is the one we know in everything we do. The reason for this distinction will become very short when we solve this problem.

Determinism is a theory which states that each person’s action is by the previous event and not by the exercise’s will. In philosophy, the view is built upon the foundation of metaphysics; on the other hand, it is possible, theoretically, uncaused events. Scientists worldwide have discovered the causes of some particular actions. Thus the success of control tends to support this rule.

Under the department of philosophy, the discussion of the reason for the connection is one of the two soul’s complementation activity, the reason being deliberation and argument. According to the concept of free will, a rational act would be an exercise of the will performed after due consideration.

Contemporary philosophers have argued that determinism is supplemented by introspection of thoughts and actions. It reveals the activities that happen due to our own choices and is not supported by previous events or external factors. A determinist is expected to respond to such experiences of freedom as illusions. It serves as an unreliable and unscientific method for understanding human being. Sometimes mixed, fatalism is fatal. Because of this and determinism, which asserts that it is not from one thing, external causes and effects of the command, no one has an inevitable fatality in due course. Historically, this debate’s core issue is that the freedom of the will is of human behaviour and moral responsibility- the most important analysis.

Psychologists think that people tend to have such a situation when they have the option of action, whether to do it or not, can or cannot. If all of these actions can be established, the debate must not have existed. In the philosophy of mind, the reasons for performing a particular task is the same in his heart or restore events in the brain, and if so, to determine whether physical activity choices, decisions, and behaviour. Holders of the free-will doctrine also say that all human acts are determined. Hence determinism can also be referred to as a philosophical position according to which all human actions are predetermined. According to it, a person in a given situation has a choice to do the task. In the case of stars, metaphysics, the conditioning that he has received or something else makes him unable to do much but one thing only.

Academic knowledge and emotional orientation take the form of love and respect for others. Experience of a person and the virtues that he speaks is a way of his existence. It’s all about the perception of matter that a being possesses. Some people look at things differently, but in his view, in his change. In the new sense of everything, the consistency of life is changed. In this life, he is born again. 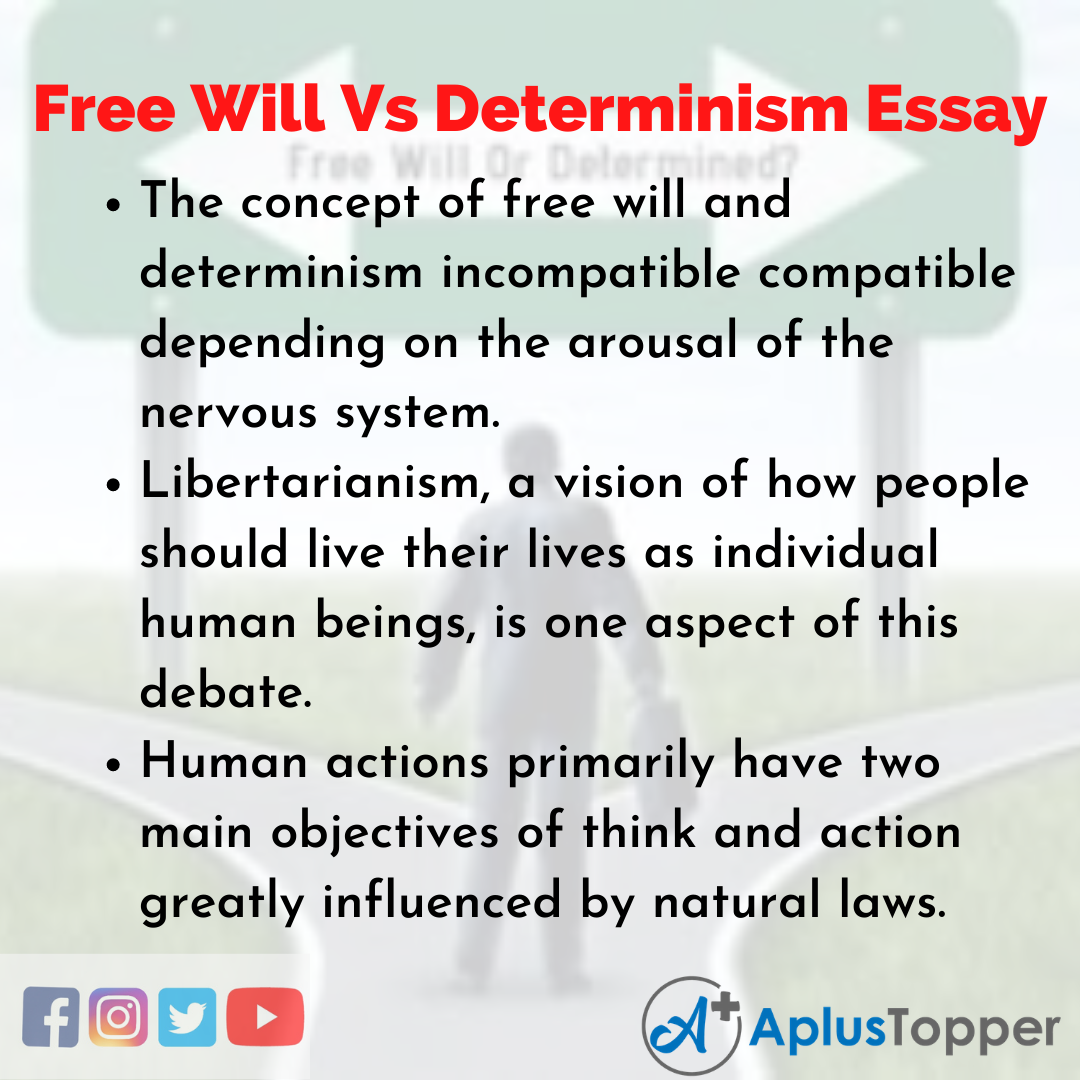 Short Essay on Free Will Vs Determinism 150 Words in English

The debate exists around the extent to which our behaviour is influenced by the result of forces over which we, humans, have no control or whether people can decide whether to act or behave in a certain way.

Extraversion or neuroticism are personality traits, which are the results of arousal in the nervous system. The need for the concept of an autonomous human being is unnecessary.

The concept of determinism is inconsistent with the societal ideas of morals and responsibility, and self-control that form the basis of our moral and legal obligations. A limitation of this concept is that psychologists cannot determine the person’s behaviour due to the complex interaction of variables that can influence behaviour.

This view sees us as no more than a machine of science, and even consciousness itself is interpreted as a level of arousal in the nervous system.

10 Lines on Free Will Vs Determinism in English 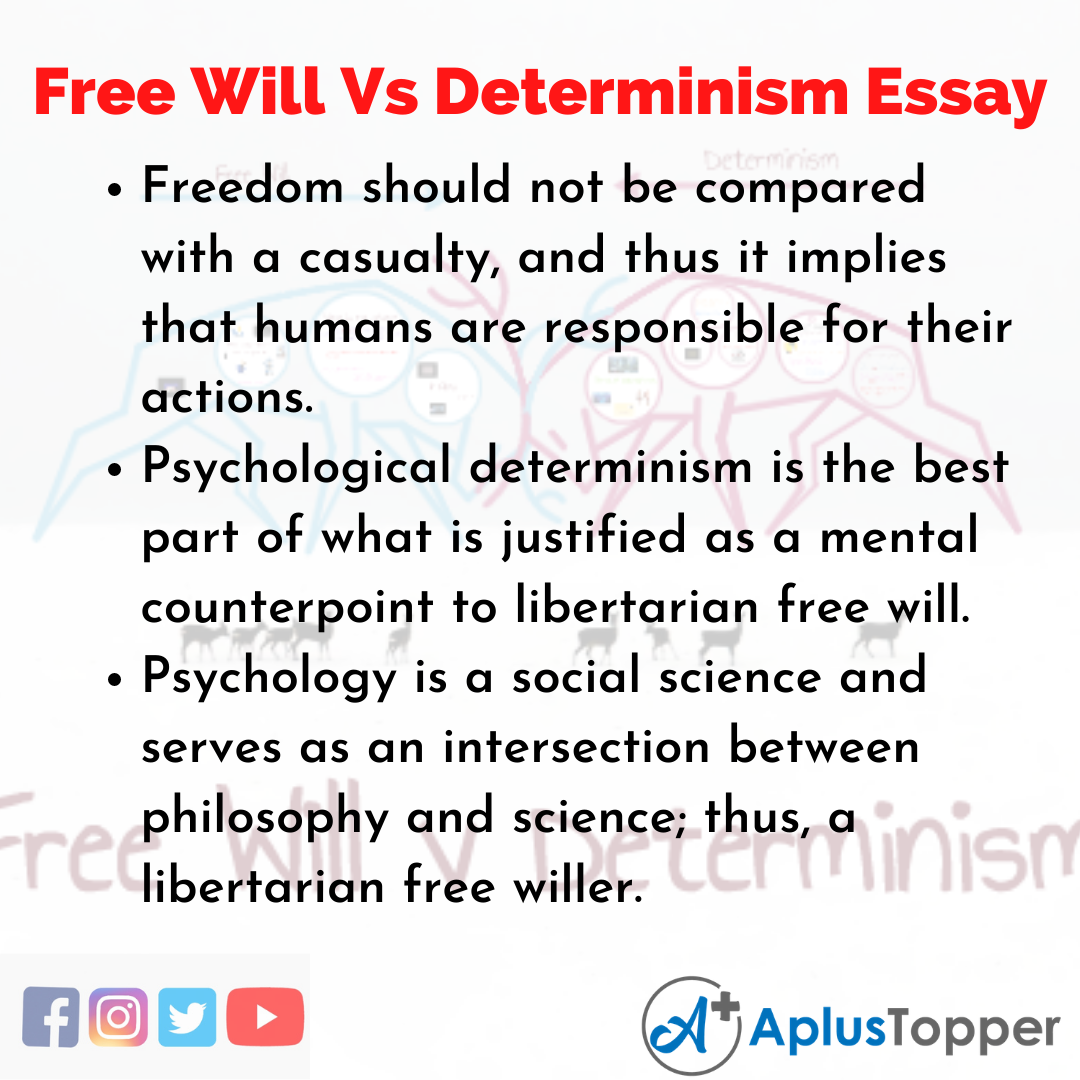 FAQ’s on Free Will Vs Determinism Essay

Question 1.
What is Free Will Vs. Determinism?

Answer:
Free will is a term of philosophy that determines the ability to have a rational choice to choose a certain type of action. At the same time, determinism is a theory by which each person’s action influences the previous event.

Question 2.
Why is the topic relevant?

Answer:
The concept of free will and determinism is incompatible and compatible, depending on the nervous system arousal.

Question 3.
How can it be justified?

Answer:
Freedom should not be compared with the casualty, and thus, it implies that humans are responsible for their action.

Question 4.
Which one of these is more relevant?

Answer:
Determinism to which free will is supposed to make itself compatible is physical determinism.