Free Will Essay: The idea of free will is that an individual can make one’s own choices about how they act, make assumptions and have opinions in various aspects of life. In other words, one’s free will is their freedom to be self-determined.

One’s free will not be fixed by nature; free will in the belief that one’s behaviour is under their control and is not the result of any external factors. Free will is the ability of all humans to choose between various possible courses of action without any hindrance.

We are providing students with essay samples on a long essay of 500 words and a short essay of 150 words on the topic Free Will for reference.

Long Essay on Free Will 500 Words in English

Free will is the potential to choose between various possibilities of a particular course of action without any external factors influencing the choices. The free will of an individual is closely linked to their understanding of the concepts of moral responsibility, guilt, praise, sin and their judgements of various situations.

Often it is considered that one’s free will is the own result choice regarding things, however, most often one’s free will is in accordance to what an individual has learned in their course of life. The free will of an individual is closely linked to the concepts of persuasion, advice, prohibition and deliberation. The actions of an individual which are freely willed are traditionally the one’s which either deserve the credit or the blame. If free will exists, and if it does how it implemented, and implications of are whether it exists or not, has been one of the longest-running debates of religion and philosophy.

Free will is often conceived as the capacity to make choices where any past events have not determined the outcome. Determinism is a philosophical concept which believes that previously existing causes determine all the choices in an event. Determinism suggests that only a single course of the event is possible. This is inconsistent with the existence of free will on an individual.

The debate between free will and determinism has revolved around to the extent that one’s is a result of the forces over which an individual has no control or if people can decide for themselves how to act and behave in a certain way. One of the biggest assumptions of the humanistic approach is that all humans have free will – not all behaviours are determined.

Psychologists taking the free will view suggest that determinism removes dignity and freedom – devaluing human behaviour. By implementing general laws of behaviour, deterministic psychologist underestimates the uniqueness of human beings and their freedom to choose their destiny.

When living beings began to make choices, the evolution of free will began. The difference between animals and plants showcases an important early step. A free will is an advanced form of a simple process of controlling one’s self-called agency. Free will is closely linked to two other important philosophical issues – moral responsibility and freedom of action. Most often, it is thought that an agent’s free action is an out of their free will.

Arguments on free will are mostly semantic arguments on definitions. Most experts denying free will are arguing against unscientific, peculiar versions of the idea. In these arguments the meaning of free will is left untouched which most people widely understand and believe – that is consciously making choices about what to do in the absence of any external coercion and taking responsibility for one’s action.

No one denies that people engage in logical reasoning and practice self-control in making choices. Free will is not typically the magical violation of causality. Free will is just another type of cause. The informal process by which an individual decides what they want to do, which alternative they are willing to choose when given different options in a particular situation. 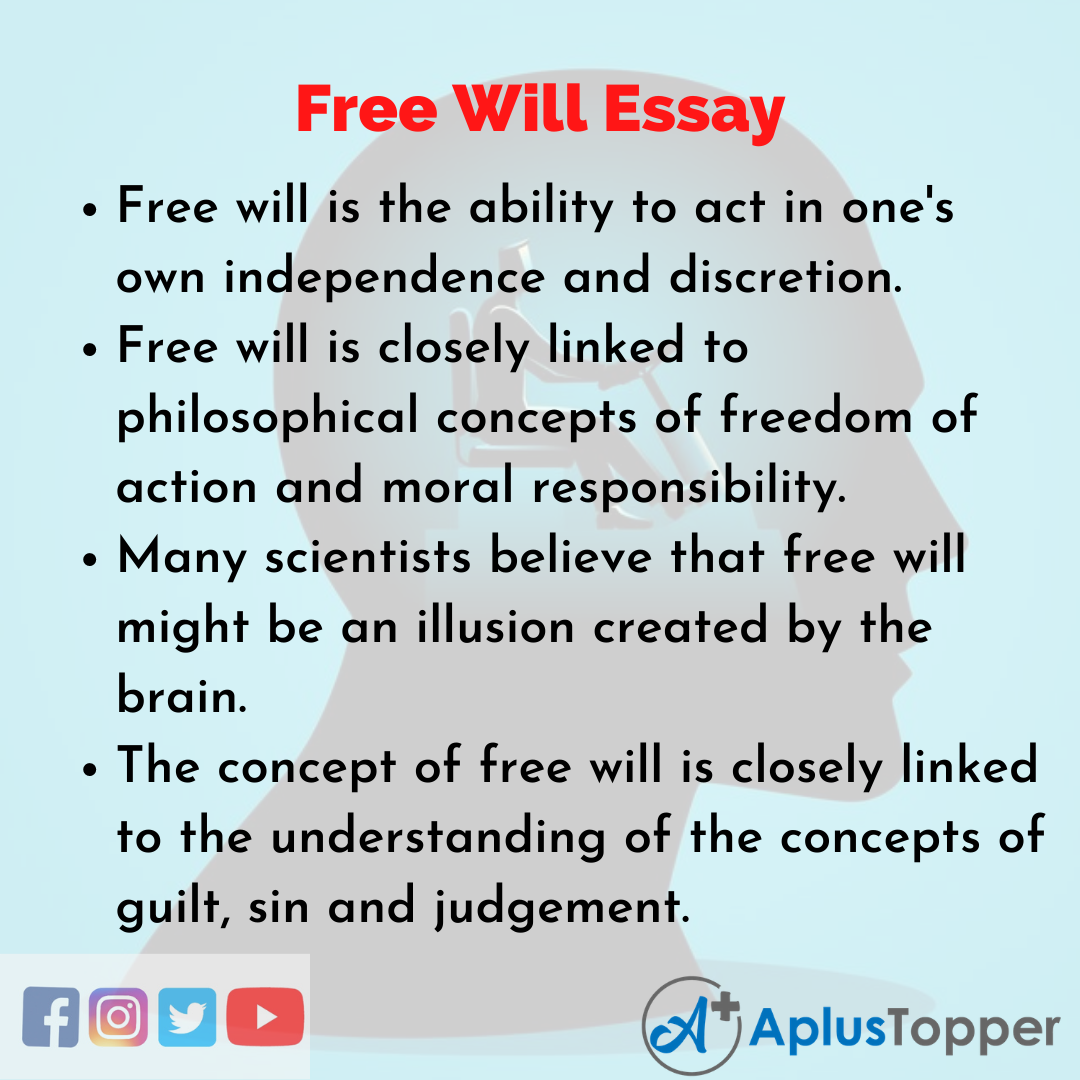 Short Essay on Free Will 150 Words in English

In humans, free will is the capability and potential to choose in between different alternatives or to take measures independently of natural, divine or social restrains. Some advocates of determinism deny free will. Free will is the freedom and power to act without any constrains of necessity or fate. According to many philosophers, free will is just a figment of one’s imagination. They believed that no one has ever had and neither will have complete free will. Rather the choices one makes is either determined or is completely random.

Scientists might have proven that free will might be an illusion. People are convinced that they make conscious choices in due course of their lifetime. However, it may be that the brain convinced itself that it made a free choice from the available options that were given to them after the decision was already made.

10 Lines on Free Will in English 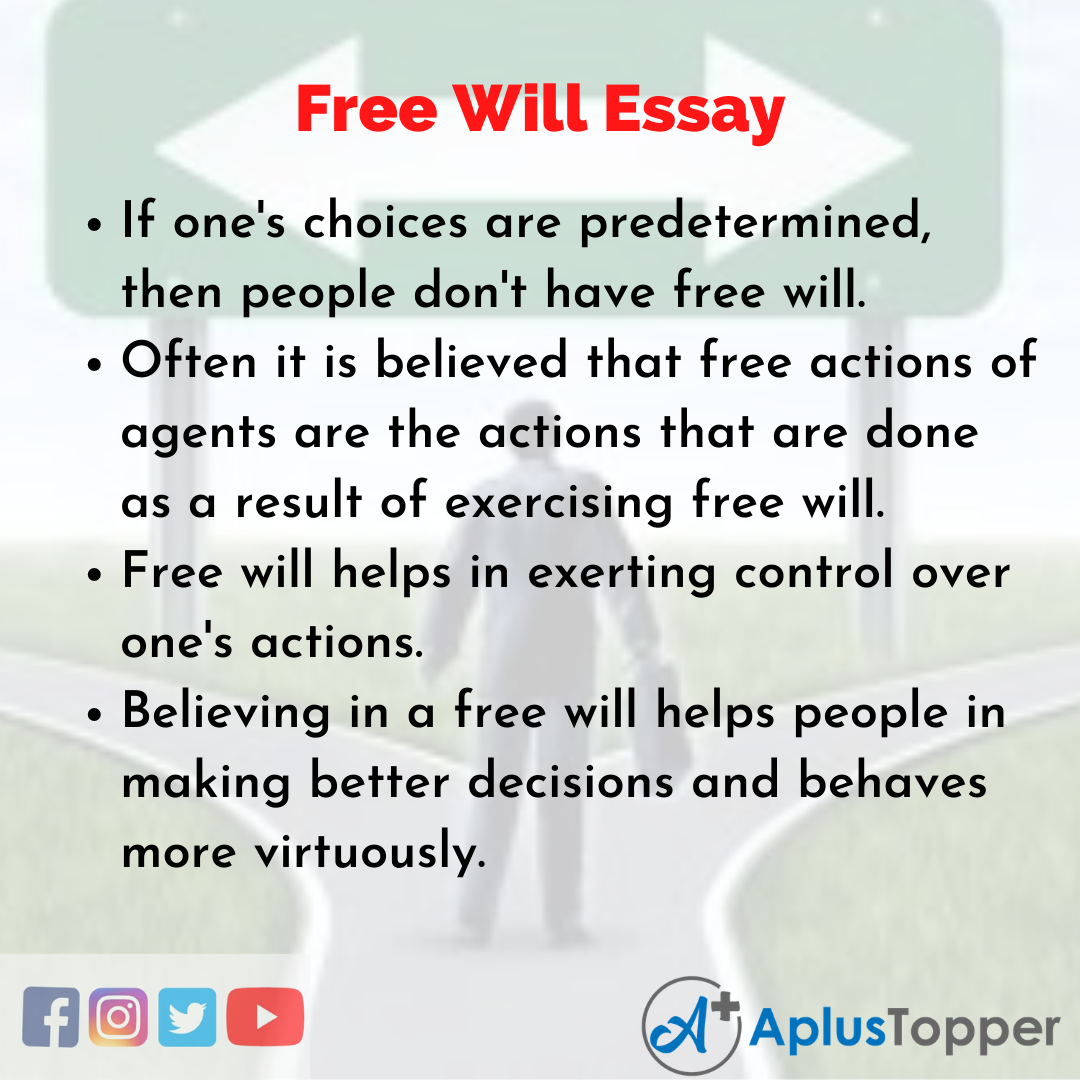 FAQ’s on Free Will Essay

Question 1.
Is free will an illusion?

Answer:
It is a topic of debate. Many scientists believe that it is an illusion and many don’t.

Question 2.
What comes in contrary to free will?

Answer:
Determinism is contrary to free will.

Question 3.
What is free will closely be linked to?

Answer:
Free will is closely philosophically linked to moral responsibility and freedom of action.