Frederick Douglass Essay: Douglass is a well-known figure in the American history of the abolitionist movement. He was not only a social reformer but also a writer, orator and statesman. He became known to the world after he escaped slavery in Maryland and became an abolitionist.

His brilliant oratory skills became a bookmark in the abolition movement. His anti-slavery writings are popular and appreciated in the present contemporary world in large. His brilliant skills in writing has people flabbergasted to believe that he was once a slave.

We are providing a long essay on Frederick Douglassof 500 words and a short essay of 150 words on the same topic along with ten lines about the topic to help readers.

Long Essay on Frederick Douglass Essay is usually given to classes 7, 8, 9, and 10.

Frederick Douglass was a well known American who participated in the abolition movement. He was a slave in Maryland but tactfully succeeded in escaping. He later became an abolitionist in Massachusetts and New York. He was not only a social reformer but also a writer, orator and statesman. His has a significant contribution to American history to abolish the slave trade.

Frederick Douglass was born in the early 19th century. His birthplace is not documented. He remembered his mother calling him “Little Valentine”, thus he celebrated his birthday every year on 14th February. Douglass was accurately a mixed-race child. His racial history included native American, European and African. His mother died when Douglass was seven years old. He spent his early childhood under the surveillance of his grandparents and later on moved to live with Lucretia Auld.

Douglass believes Lucretia had a great impact on shaping his life. She taught him alphabets. Douglass learned to read and write from his neighbourhood friends. As he belonged to a hereditary slave culture, at a tender age, he was enslaved to William Freeland and thereafter Edward Covey. Wherever he was, he tried to put the rays of literacy to his fellowmen, leading to discontentment among the masters being served by educated slaves. Douglass escaped slavery on 3rd September 1838 when he boarded a train in Philadelphia and reached Maryland.

Douglass married Anna Murray on 15 September 1838. Anna was a major influence for Douglass to escape slavery and dream of a free life. Both of them settled in New York. Douglass joined an independent black denomination church and became a licensed preacher in 1839. He was promoted to various positions like steward, sexton and Sunday-school Superintendent. Douglass joined several institutions in New Bedford and became an abolitionist leader. In 1843, Frederick Douglass engaged with American Anti-slavery Society’s Hundred Conventions project. He toured in meeting halls of eastern and midwestern united states.during this tour Douglass experience some terrific moments as an abolitionist which bothered him for the rest of his life.

Douglass was an active reformer in women surfage and held public meetings. For his contribution in the political and social reforms of America, he was nominated for the vice president of united states as a running mate and a nominee for vice president of Victoria Woodhull. He was the first African-American to be nominated in both e positions.

Douglass was a believer of equality in every aspect of society, race and gender. He spent his life fighting and reforming against the injustice on the black race and abolition of the slave trade. He died on February 20, 1895, due to a massive heart attack. Douglass was rewarded and honoured with several prestige during life and posthumously. His contribution to the abolition movement is noteworthy and highly respectable. 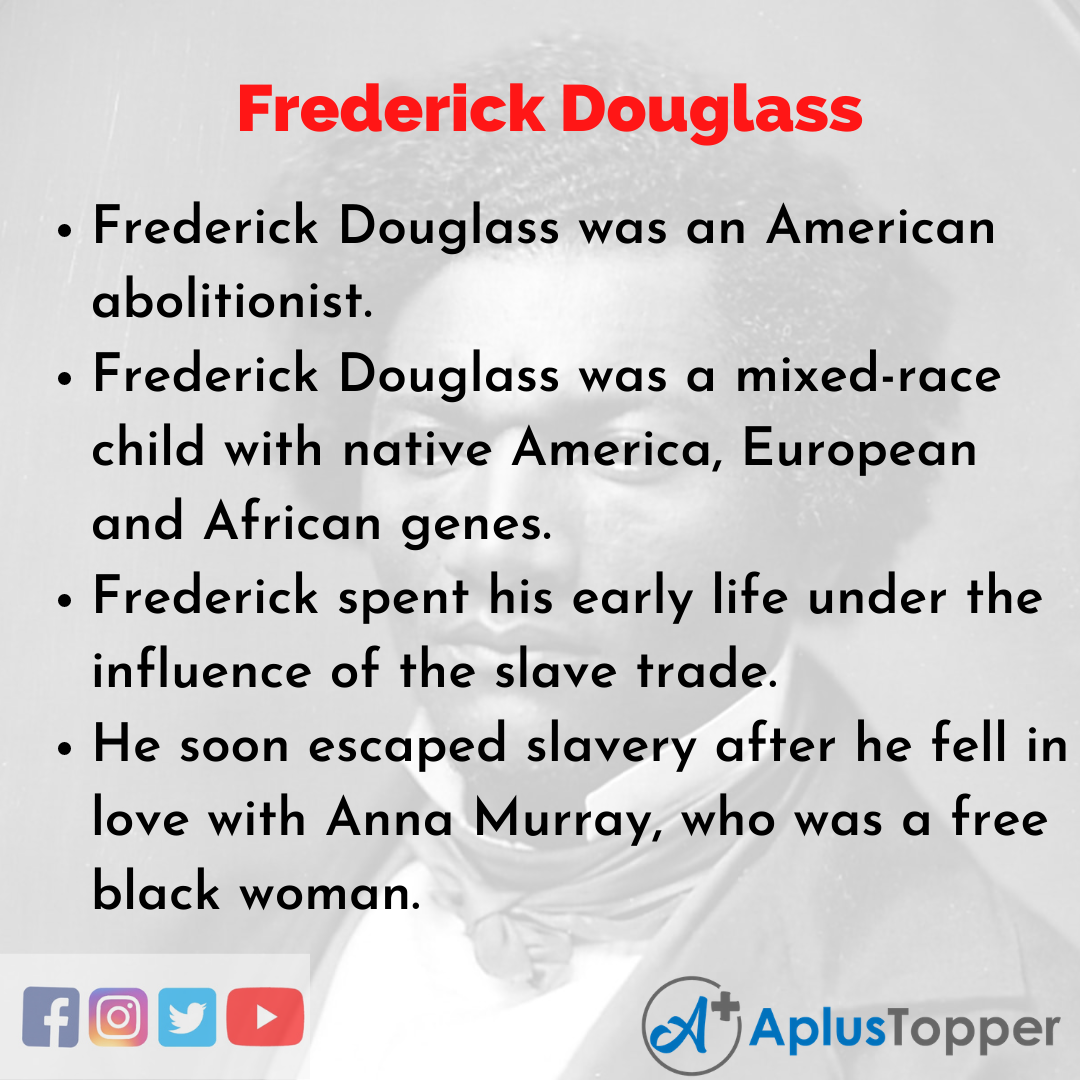 Frederick Douglass was an American social reformer. His notable contributions are in the field of abolition movement as an abolitionist and a writer. He was also an orator and statesman. He wrote three autobiographies named Narrative of the Life of Frederick Douglass, an American Slave, Bondage And His Freedom, Life And Times Of Frederick Douglass. All three books contained experiences of Douglass as a slave and inspirations for the generation to abolish slavery and treat other races as respectable human beings.

Douglass was a mixed-race child. His birth details are nowhere documented. However, Douglass remembered his mother calling him “Little Valentine”. Thus he celebrated his birthday on February 14th. He spent most of his early life under the influence of the slave trade. Anna Murray was a free black woman who influenced and aspired Douglass to escape slavery who later on became his wife.

Frederick Douglass died on February 20. 1895 due to a massive heart attack. He was a believer of equality and a supporter of social reforms encouraging equality. 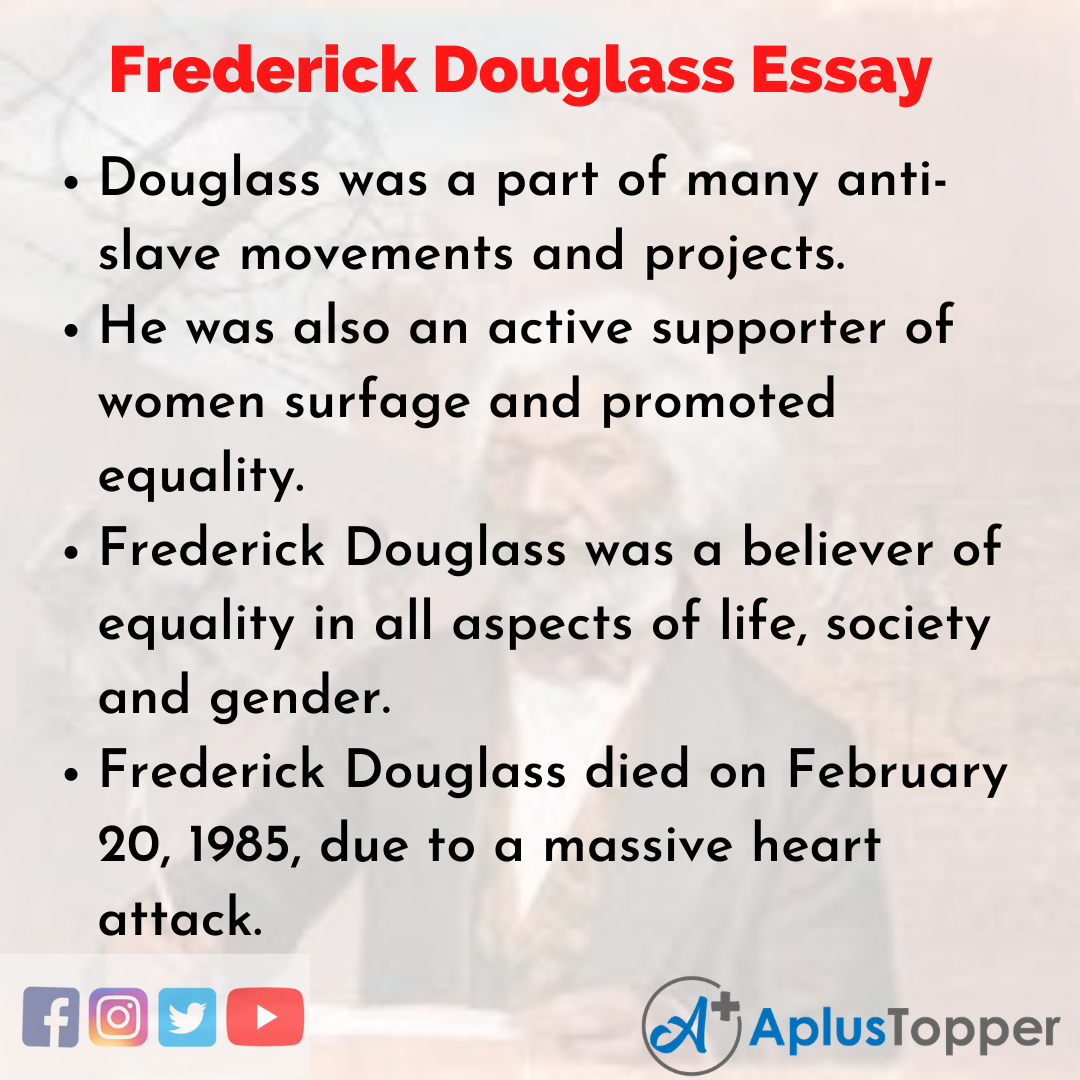 Question 1.
Who was Frederick Douglass?

Question 2.
Did Frederick Douglass abolish the slave trade in the USA?

Answer:
Frederick Douglasswas an active reformer in the anti-slave movements, but it took many more years to abolish slavery in the USA after his death.

Question 3.
What was the race of Frederick Douglass?

Question 4.
How did Frederick Douglass die?

Answer:
Frederick Douglass died of a massive heart attack after he came back from a meeting.