Foods that Start with T: We all are trying new food items every day. Do you happen to remember the name of all the foods that you have tried? In this writing, we added a list of food items that start with the letter t and are consumed on a daily basis.

We have also included some interesting facts about these everyday food items, which will make your learning process more fun.

Name of Foods Whose Names Start With T

List of Food Names With Letter T At The Start

Fascinating Facts On Food That Start With T

These fruits are also called tree tomatoes. These oval-shaped fruits can be found in Indonesia and South America. They are low in calories and are incredibly nutritious fruits. These fruits have a mild tomato flavour and can substitute green tomatoes.

It is a Japanese sauce that is made with fermented soybeans. It is consistent and has a more balanced flavour than the Chinese soy sauce, which makes it a good choice as a dipping sauce. This sauce is also gluten-free and vegan. Tamari is also a well-known seasoning for roasted nuts, especially almonds.

Cheese is always an exceptional addition to any dish in case the recipe calls for it. Taleggio is an Italian cheese type that is smear-ripened and semisoft. The cheese has been named after Val Taleggio. It has a strong flavour and thin crust, which is mild with a unique fruity tang.

Tahini is a staple in the Mediterranean dishes since it is native to the middle east. It’s a thick spread of pastes which is made by grinding sesame seeds. It is rich in nutrients; however, deficient in calories and has a nutty, light flavour.

Tomatoes are nutrient-dense super-fruits offering benefits to a wide range of body systems. These fruits were originated in Central and Southern America. Tomatoes are low in calories – and averaged size tomato can be just 22 calories, and a large one is 33 calories.

This is a flavourful and vibrant salad which is made with a colourful array of grape tomatoes and mildly sweet cherries, fresh mozzarella, and it is tossed in with a refreshing garlic-herd vinaigrette dressing. 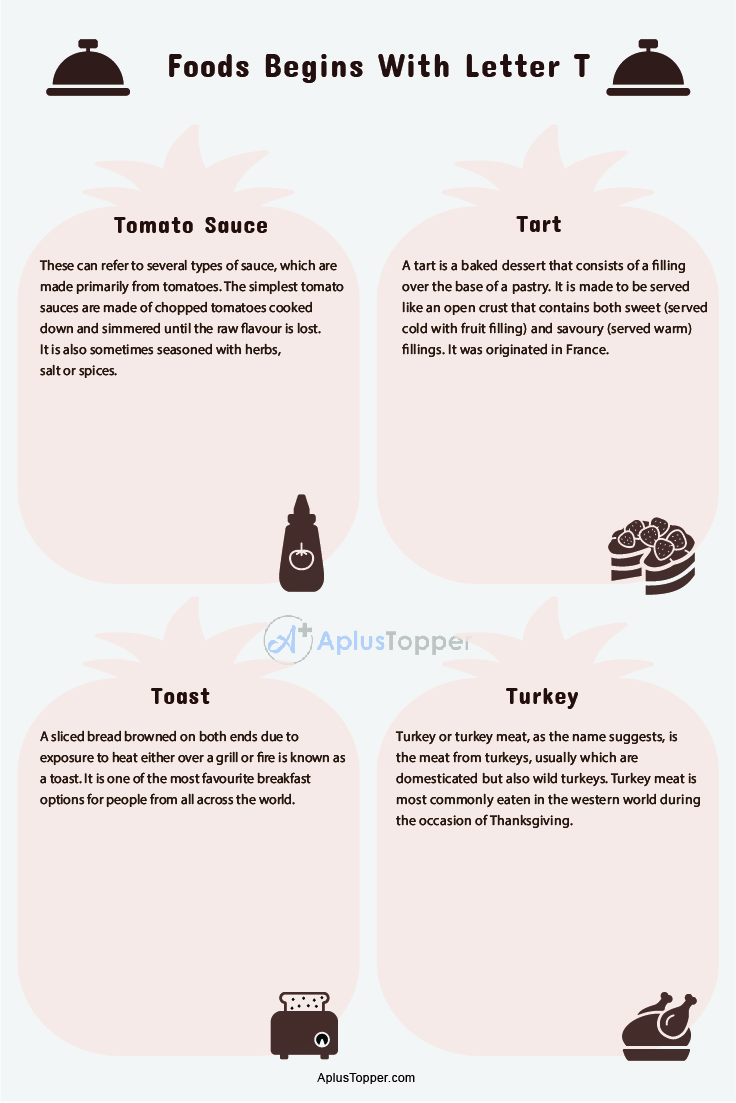 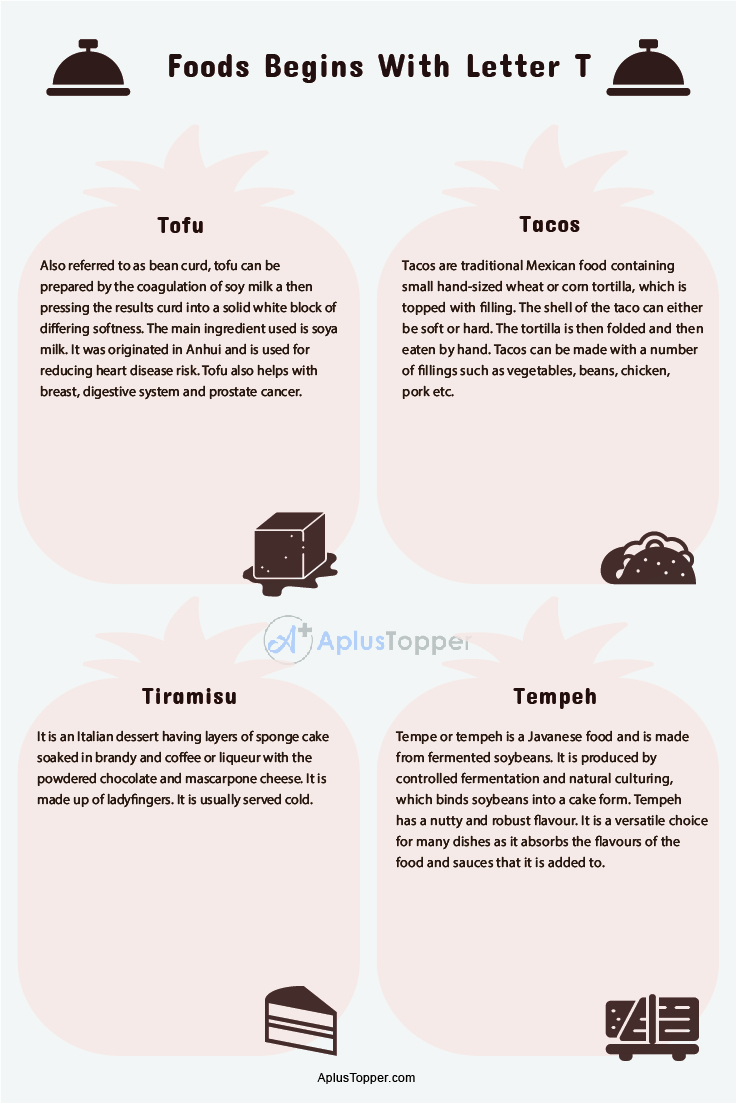 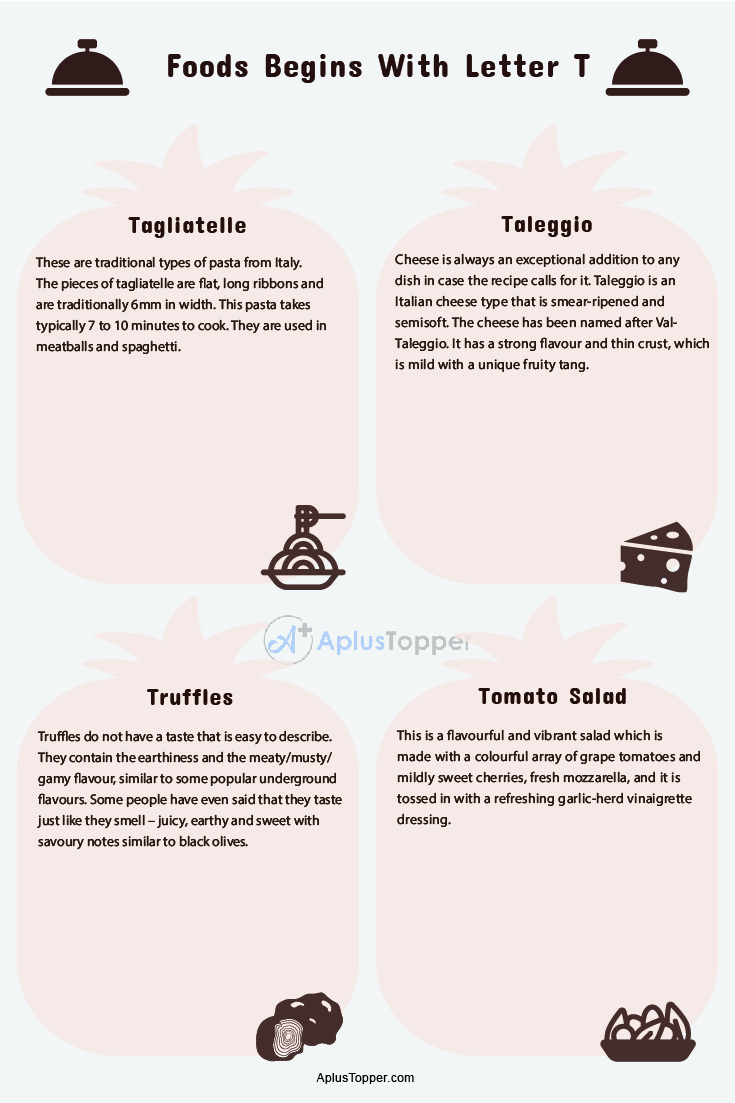 These can refer to several types of sauce, which are made primarily from tomatoes. The simplest tomato sauces are made of chopped tomatoes cooked down and simmered until the raw flavour is lost. It is also sometimes seasoned with herbs, salt or spices.

A tart is a baked dessert that consists of a filling over the base of a pastry. It is made to be served like an open crust that contains both sweet (served cold with fruit filling) and savoury (served warm) fillings. It was originated in France.

A sliced bread browned on both ends due to exposure to heat either over a grill or fire is known as a toast. It is one of the most favourite breakfast options for people from all across the world.

Turkey or turkey meat, as the name suggests, is the meat from turkeys, usually which are domesticated but also wild turkeys. Turkey meat is most commonly eaten in the western world during the occasion of Thanksgiving.

These fruits weren’t the fruit that was bred after a generation of experimenting. Instead, it is a wild citrus fruit which originated in Japan. It is a variety of mandarin orange, a citrus fruit.

These apples don’t look similar to the gemstones that they are named after. Instead, they are round, large and bright red fruits with greenish speckles. Its resists diseases very well and has a piquant flavour. They are developed in the Czech Republic. They can also be used in salads and various other dishes.

Tuna is a saltwater fish, and many people widely eat it. Tuna is widely sold ins canned form, even though fresh tuna is also available. Canned tuna is considered to be the most relevant source of mercury in a person’s diet.

People from all across the world eat the pulp from tamarind. This pulp is tart and sweet at the same time. However, it might be sour if eaten before it is ripe. It is also sometimes used for adding flavours in beverages and foods; it is highly used in Asian cooking for curries and chutneys.

The term ‘totapuri’ implies ‘parrot face’ in English. These mangoes originated in India, and their shape is pointy, elongated, and like a parrot’s beak. These mangoes are also partially cultivated in Sri Lanka. The trees are medium size with greenish-yellow fruits.

These are root vegetables usually grown in temperate climates across the globe for their fleshy, white taproot. Little spicy when raw, turnips will turn nutty, sweet and earthy when cooked. Raw turnips have starchy, crisp flesh.

Tacos are traditional Mexican food containing small hand-sized wheat or corn tortilla, which is topped with filling. The shell of the taco can either be soft or hard. The tortilla is then folded and then eaten by hand. Tacos can be made with a number of fillings such as vegetables, beans, chicken, pork etc.

Tangelo has the combined qualities of two varieties of citrus fruits – tangerine or mandarin and grapefruit or pomelo. Tangelo and mandarin look quite similar. It is also an excellent source of vitamin A, C and flavonoids, which help in preventing throat infections and the common cold.

These mangoes are known for being able to be stored for a long time, making it ideal to sell them in stores. It is not best in terms of flavour and sweetness. These mangoes originated in Florida, and they are medium to large in size with an oblong or oval shape.

It is an Italian dessert having layers of sponge cake soaked in brandy and coffee or liqueur with the powdered chocolate and mascarpone cheese. It is made up of ladyfingers. It is usually served cold.

These apples are named after ‘Tompkins County’ from New York. A study showed that Tompkins King apple trees were originated in New Jersey. These apples are big in size and are of excellent quality for both cooking and dessert fruit. They belong to the species of Malus pumila.

These fruits are used for making pudding and can be found in Texas as well as Oklahoma. If eaten fresh, the fruits have a sweet and mild taste. It is one or two inches long, dark green, small and oval-shaped leaves. The trees have a lifespan of almost 30 to 50 years.

Terap is a relative of jackfruit, breadfruit and cempedak. It has a strong smell and the taste, which most think is more palatable than the jackfruit and cempedak. Its flavour has the hint of mild creamy, almost juicy. The thick rind of the fruit is covered with bread and soft spines. It becomes hard as they become mature.

These are ring-shaped pasta that originated from the Italian region of Emilia. Traditionally this pasta is stuffed with a mix of eggs, Parmigiano Reggiano cheese and nutmeg and is served in capon broth. It can be typically cooked within 4 to 9 minutes. They have a ‘shelf life of 2 to 3 days when unopened.

The name of the fruit, ‘tangor’, is a combination of the word ‘tang’ and ‘orange’. These round orange fruits are another citrus hybrid, a combination of sweet oranges and mandarin. They are cultivated in the warm and temperate regions of the world.

It is a typical Japanese food generally consisting of meat, seafood and vegetables which have been battered and deep-fried. This dish had been introduced in the 16th century by the Portuguese who resided in Nagasaki. The batter of tempura has three ingredients – eggs, flour and ice water.

Tangerines are pretty similar to the common oranges; however, they are not as sour or large. Refrigerated tangerines can last up to 2 weeks. This fruit has been named after the city of Tangier in Morocco. They also have a rough, thick peel and sweet, tangy flesh.

These berries resemble truncated raspberries. They also make a fantastic jam. However, they cannot be shipped or packed for long. They taste like an intense, tart-sweet smouldering on one’s tongue. They ripen continuously between late June through August.

These are traditional types of pasta from Italy. The pieces of tagliatelle are flat, long ribbons and are traditionally 6mm in width. This pasta takes typically 7 to 10 minutes to cook. They are used in meatballs and spaghetti.

Tempe or tempeh is a Javanese food and is made from fermented soybeans. It is produced by controlled fermentation and natural culturing, which binds soybeans into a cake form. Tempeh has a nutty and robust flavour.

It is a versatile choice for many dishes as it absorbs the flavours of the food and sauces that it is added to.

Tart cherry is related to sweet cherry. Their pulp is sourer, and that’s why they’re known as tart cherries. They are rich in different nutrients and are also known for increasing strength reducing muscle soreness. They are also known for curing insomnia, improving the amount and quality of one’s sleep.

Also referred to as bean curd, tofu can be prepared by the coagulation of soy milk a then pressing the results curd into a solid white block of differing softness. The main ingredient used is soya milk. It was originated in Anhui and is used for reducing heart disease risk. Tofu also helps with breast, digestive system and prostate cancer.

These fruits were first discovered in 1986 in New Zealand. Some believe it is an immensely juicy pear that is a naturally occurring hybridization of Comice and Bosc pears. These fruits, when ripe, are juicy, creamy and tender with sweet, rich and mild notes of honey.

Truffles do not have a taste that is easy to describe. They contain the earthiness and the meaty/musty/gamy flavour, similar to some popular underground flavours. Some people have even said that they taste just like they smell – juicy, earthy and sweet with savoury notes similar to black olives.

Tabasco is a hot sauce American brand made from tabasco peppers, vinegar, and salt. This brand of hot sauce was founded in the year 1868.