Foods that Start with R: Food is something we need every day since it helps us with our growth and maintains a healthy life. We love to taste all different variety to food, since, every food has their own distinctive taste. With so many Foods variety across the world, it is not possible for us to remember all the names of the foods.

Hence in this article, let us look at the list of food that starts with R and try to get to know about them to get familiar with the terms.

Names of Foods whose Name Starts with R

List of Foods Names With Letter R At The Start

Fascinating Facts On Foods That Start With R

It is an edible root vegetable that is consumed all over the world. They are mostly eaten raw, incorporated with a salad in various parts of the world; they are also cooked to add additional tastes to this vegetable. They are rich in minerals and antioxidants, especially in minerals like Calcium and Potassium.

Raisins are dried grapes. They help in lowering heart disease and reduces LDL cholesterol which is bad cholesterol. Hence it contains antioxidants; raisins give one youthful and unblemished skin. It also drives the pimples away. Raisins are also the source of gaining weight.

Ramen is among the most popular noodle dish all over the world. This Japanese noodle soup had wheat noodles, which are served in a meat or fish broth. It is also flavored with different sauces such as soy sauce or miso and is finally completed by toppings such as eggs, or sliced pork or nori, Menna, or even scallions.

These rich-colored berries have a sweet juicy taste. Their color varies from red and black, also to purple, yellow, or sometimes even golden. They are abundant in various vitamins, minerals, and antioxidants. Raspberries help to maintain a healthy brain and neurological system.

This world-famous French dish is made up of a mixture of vegetables. It is a classic summer-end French stew. It is made up of Tomatoes, Zucchini, Eggplant, Bell pepper, and yellow squash. The food which was once considered to be the food of the poor people is now one of the most widespread and liked cuisines in the world.

The Red Cabbage, also known as Blaukraut. The leaves are dark red or purple. Red Cabbage is rich in Vitamin K and has a small amount of Calcium, Magnesium, and Zinc, which helps in maintaining healthy bones. Red Cabbage is cooked slowly with dried fruits and apples mixed with spices and a little wine or Apple cider vinegar.

The skin of the Red Potatoes is loaded with fiber, vitamin B, Potassium, and Iron. Red Potatoes contain fewer calories and carbs than normal Potatoes. It also maintains healthy blood pressure. Red potatoes have thin skin, and they can be consumed as a whole

The Red velvet is softer than most velvet cakes. Its taste is like a mixture of vanilla and chocolate with a slight buttermilk taste. Its soft texture and red and white color make it a very favorite cake.

The Ricotta is an Italian cheese that is made up of the milk of cow, goat, sheep, or the Italian water buffalo. It is a whey cheese. Ricotta is a part of the dishes like lasagna and other Italian dishes. It is also a stuffing for manicotti, ravioli, and different types of pasta. It is also made into the cheesecake and as a filling with cannoli.

Rye bread is bread made with flour of rye grain. It can be light and dark in color. They are high in many nutrients like fiber, and vitamin B. Rye bread is most famously used for The Classic Cream cheese and smoked salmon. 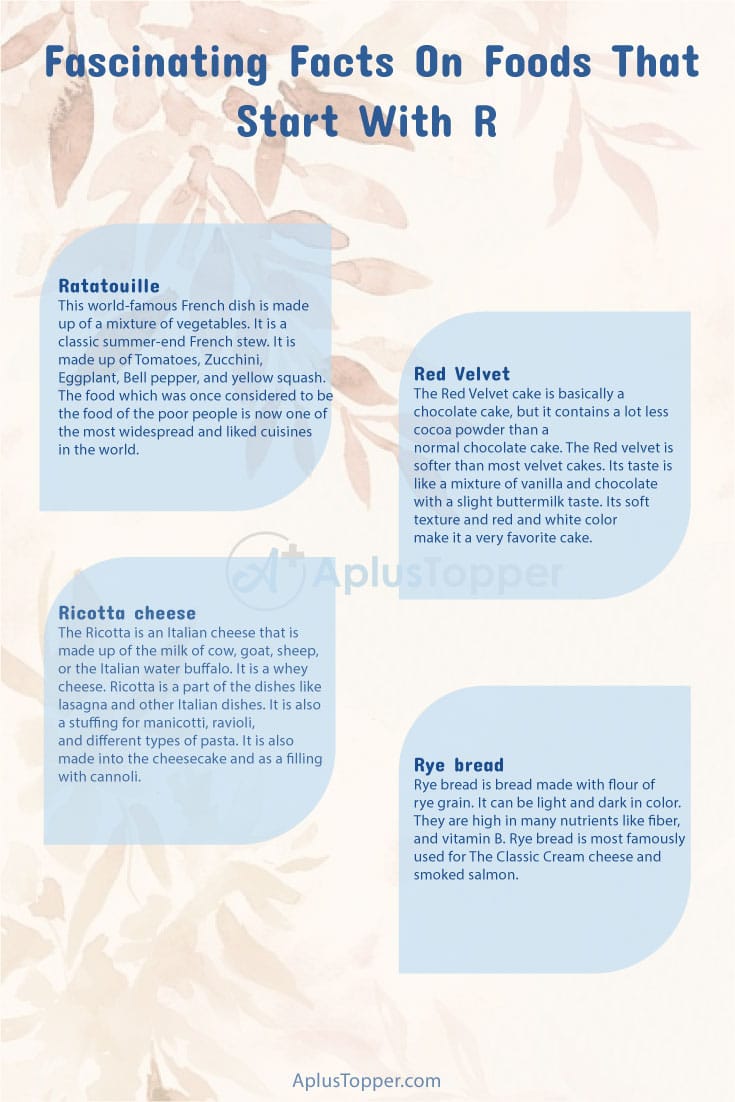