Festivals of India Essay: Festivals of India essay educates the students about India’s vast cultural legacy. With various cultures and religions spread over the country, there are countless festivals celebrated in India. From an academic perspective, students must know about the various festivals celebrated across India. Read on to find more about on essay on importance of Festivals.

To write an engaging festival of India essay, students must use a few tips and tricks to make their essays stand out. This helps students to write very engaging essays and secure more marks in their exams. Consider the following tips and tricks when writing an essay:

These tips will help you secure more marks for the evaluation of the essay.

India has a rich culture, dating back several thousand years. Therefore, India celebrates the most  number of cultural and religious festivals than any other country in the world. Moreover, celebrations in India are often observed with grandeur. In general, festivals in India are classified into three categories, namely: seasonal, religious and national. 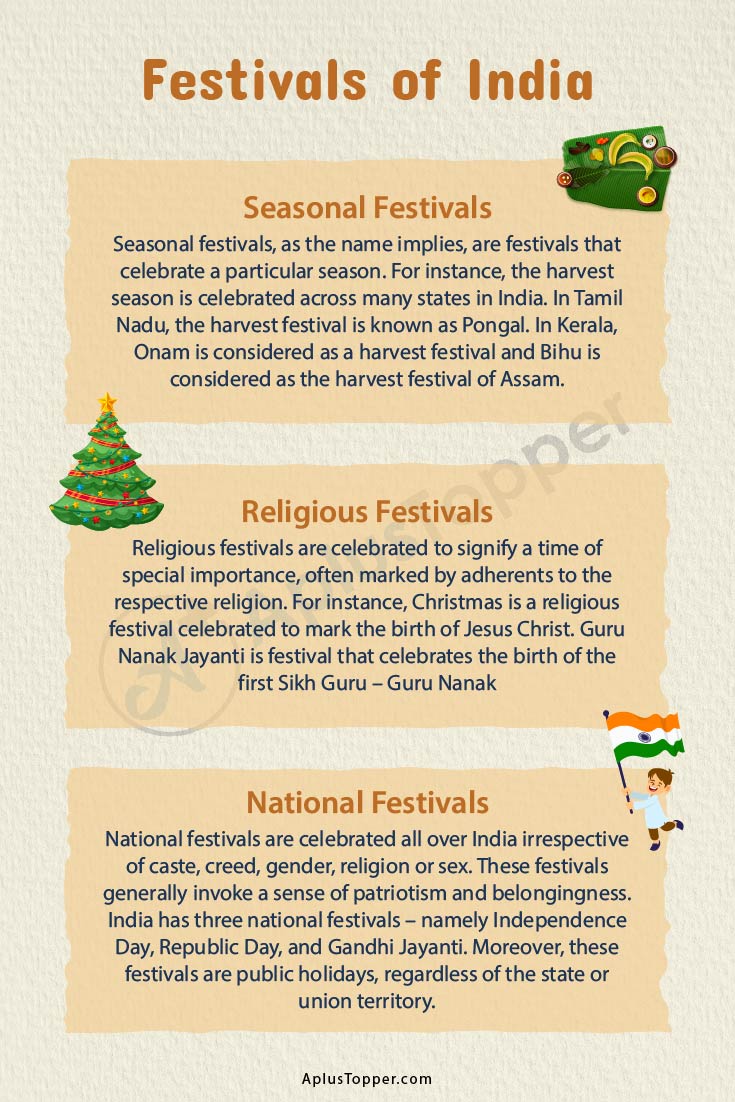 India is a cultural melting pot, with numerous cultures and religions. Therefore, it is not surprising that India has many festivals. The following are some of the major festivals celebrated across India.

Republic Day: Though not exclusively a religious festival, Republic Day marks the enforcement of the Indian Constitution nearly 70 years ago. It is celebrated on the 26th of January every year. This is an important event in the history of modern India, hence, it is a national holiday. Republic Day celebrations take place in a ceremonial boulevard called the Rajpath in New Delhi. The parades pass in front of the President of India and many other important delegates. The parade is also broadcast across national and international television, portraying India’s various cultures and diversity.

Pongal: Pongal is essentially a thanks-giving festival, and the most sacred festival for Tamil Nadu. It is  celebrated between 14th-15th January to thank the “Sun God” and the Lord Indhra for helping the farmers improve their crop yield. It is also customary to reject the old and welcome new materialistic possessions

Sankranti: Makar Sankranti is a popular festival also known by other names such as Suggi, Lohri, and Uttarayan. It is celebrated on 15th January to mark the end of winter and the beginning of harvest season. Sweets are usually exchanged among family members, friends and neighbours. In Gujarat, if one happens lookup at the skies during this festival, they may find kites of varying sizes and designs.

Basant Panchami: Basant Panchami is dedicated to the Hindu Goddess – Saraswati. The dates may vary between January last week and February first week. The festival is celebrated on a massive scale across Assam, Bihar, Odisha and West Bengal. The colour yellow is considered quite auspicious on this day, hence people wear yellow clothes in Rajasthan. In Uttarakhand, Lord Shiva and Goddess Paravti are worshipped on this day.

Maha Shivaratri: Maha Shivaratri marks the overcoming of ignorance and darkness. It is celebrated on 21st February every year with utmost splendour.  Devotees gather in large numbers to worship the Gods in temples at Varanasi. A temple in Ujjain, the Mahakaleshwar Temple is also very prominent during this time and is flocked by thousands of devotees.

Holi: Holi is one of India’s most iconic festivals.It is typically celebrated between 9th and 10th March every year. People play with with bright colours dance to music. Women beat their husbands with sticks and shields, playfully of course. The night before Holi, a big bonfire is created, signifying the destruction of any negative vibes. Southern India observes Holi by worshiping the God of Love – Kamadeva. In Gujarat, Holi is celebrated to signify new beginnings.

Diwali: Diwali, also called the Festival of Lights, signifies the triumph of good over evil and light over dark. It is celebrated on 14th November every year. Moreover, it is also celebrated to honour the seventh incarnation of the Lord Vishnu (Rama-chandra). During this festival, people perform poojas during the day and at night, they adorn their houses with lamps and burst crackers. People also exchange sweets and wear new clothes.

Christamas: Christmas is a festival which is celebrated not just in India, but almost everywhere else in the world. It is celebrated on 25th December to mark the birth of Jesus Christ, who is believed to be the son of God by Christians. Christmas is celebrated by placing gifts under a decorated Christmas tree. People also visit churches to seek blessings from Christ during this festival.

Onam: Onam is the festival of harvest for Kerala. It is also one of the biggest festivals for the state, and is celebrated with grandeur. The festival pays homage to Mahabali, a benevolent Daitya king. The celebration is almost a week long typically starting from 22nd August to  2nd September. The central part of the festival is a grand feast. Moreover, people also adorn new clothes and make patterns out of flowers in front of their houses.

In conclusion, India celebrates many festivals, national, religious and seasonal. It is also one of the few countries in the world to have such as large number of festivals.

FAQ’s on Festivals of India

Question 1.
How do you write a good essay?

Answer:
Focus on doing basic research to create quality content. Also, ensure that the following guides are integrated into your essay: