Euthanasia Essay: The word Euthanasia, originated from Greece means “good death”. Euthanasia also is known as “mercy killing”, in the modern sense of the word, is the practice of ending a life to relieve suffering.

Legally request to end a person’s life prematurely voluntarily has been under a lot of debate. This debate focuses across complex and dynamic aspects like legal, health, human rights, ethical, spiritual, religious, psychological social and cultural aspects of the society. When talking about Euthanasia, we will discuss it in a neutral aspect, covering both the supporters and opponents’ perspectives on this complex activity.

We provide children and students with essay samples on a long essay of 500 words and a short essay of 150 words on the topic “Euthanasia” for reference.

Unfortunately, there are people out there who are suffering from a long term illness or injury and find death to be their ultimate solution. They are in so much pain and suffering that they no longer find their quality of life to be at an acceptable level.

There are many forms of Euthanasia which include, people suffering from incurable disorders, newborns with severe congenital disabilities, and adults in their final stage of a terminal illness under medical life support.

When it comes to passive Euthanasia the acceptance level among the masses is way more than active Euthanasia as it directly withholds the physician with the responsibility to insert a lethal substance into the patient’s body to help them die.

A strong ethical argument against the use of Euthanasia is that it could soon become a slippery slope, with the legalization of involuntary Euthanasia following it.

You can now access Essay Writing on Euthanasia and many more topics.

In the perspective of a person in support of mercy killing — one should have the right to self-determination, and thus be allowed to choose their fate. Pro-euthanasia activists often point at countries who have legalized Euthanasia like Belgium and Netherlands to argue that it’s mostly unproblematic.

Euthanasia in terminally ill patients provides scope for organ donation. This, in turn, helps many in need of an organ transplant. Thereby giving someone the ‘Right to die’ in return helps another with their ‘Right to live’.

However, several criticisms can be seen going against Euthanasia. For example, in some cases of Euthanasia, when the patient is verbally incapable, their guardian is responsible for making the decision, and that might not be in a person’s best interests—for example, getting old aged parents killed for property will.

The strongest argument against Euthanasia is that there is no way to regulate mercy killing properly. Allowing this undermines the commitment of doctors and nurses to saving lives. Euthanasia may become a cost-effective way to treat the terminally ill, and this will discourage the search for new cures and treatments for them.

We now know that there are strong arguments from both sides. There does not seem to be any cut and dry reasoning behind whether the practice of Euthanasia is good or bad. In one end, it can be used to release someone from suffering, but on the other end, it can be used to hide punishable criminal acts. This topic stands at a moral and ethical shaky ground, thus making it harder to be accepted and legalized. Euthanasia or mercy killing is terminating a patient’s life who was previously suffering from a terminal illness. In recent years, there have been debates around the globe over the issue, whether Euthanasia should be legalized. Mercy killing can be active or passive.

Active Euthanasia includes doctors to administer lethal doses to their patients who voluntarily as for Euthanasia. This factor is a major cause of debate in most countries, including India, where this act is illegal. However, passive Euthanasia, under some circumstances, is acceptable where a terminally ill patient refuses life-sustaining medical treatment.

It is not out of context to mention here that one should not be confused Euthanasia with assisted suicide. Euthanasia comes with a lot of factors to follow through as this is an ethically and morally a complex issue.

Even though it can relieve someone’s suffering, but legalizing it can also lead to some serious crimes like murder and places too much power in the doctor’s hands. Thus, Euthanasia is a matter that requires a high moral compass and needs thorough analysis in each case under specific circumstances if legalized.

10 Lines on Euthanasia Essay in English 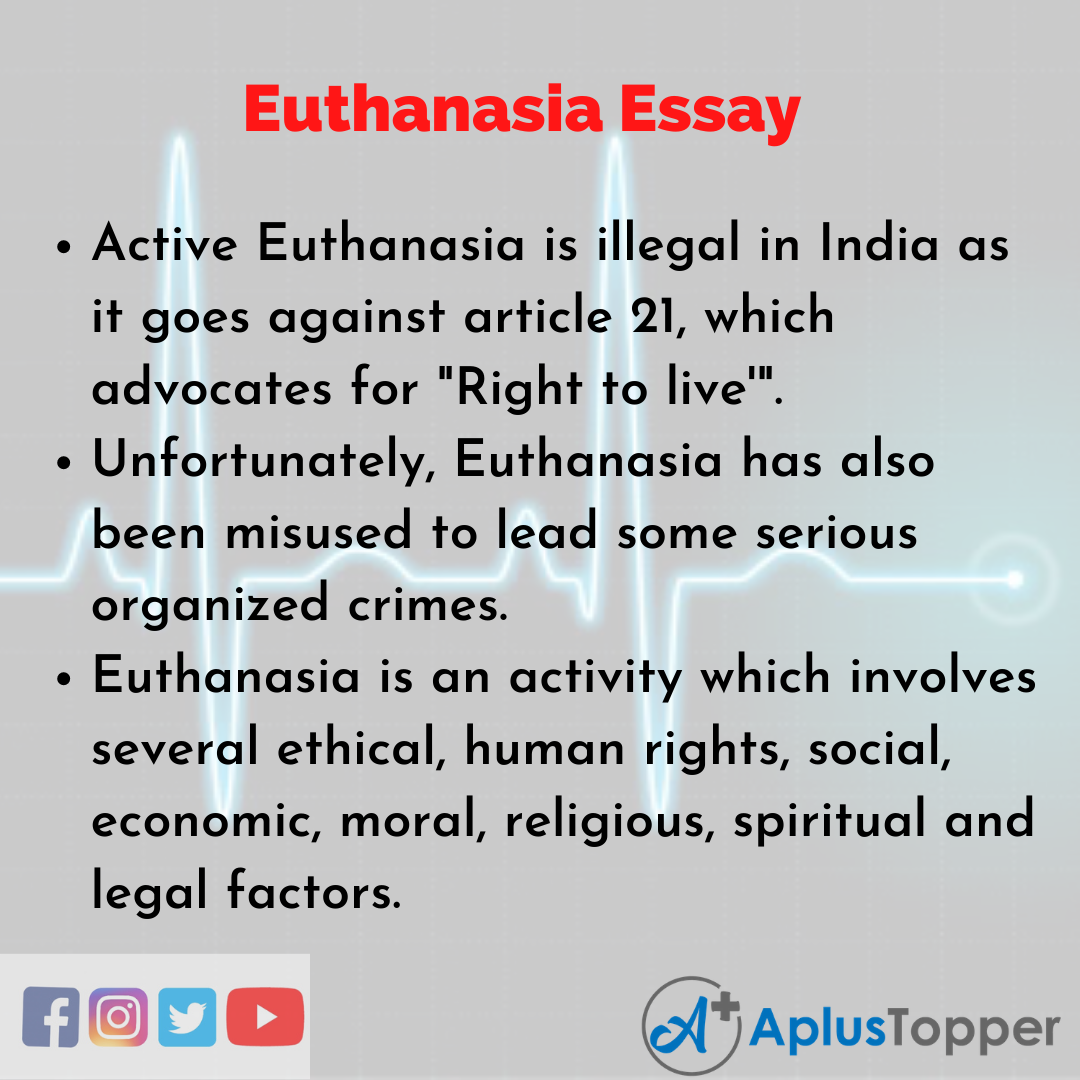 Question 1.
Where is Euthanasia permitted?

Answer:
In 1995, Australia’s Northern Territory was the first jurisdiction to pass a euthanasia bill. As of early 2015, Euthanasia was permitted in Oregon, Washington, Vermont, The Netherlands, Belgium, Luxembourg, and Colombia.

Question 2.
Is there an ethical difference between switching off life support, withdrawing treatment and voluntary Euthanasia?

Answer:
Yes. When life support is switched off, the person dies from their illness naturally. When Euthanasia is performed, a person dies from a lethal drug, deliberately given to cause death.

Question 3.
What is the difference between ‘mercy killing’ and Euthanasia?

Answer:
‘Mercy killing’ is a euphemism for Euthanasia.

Question 4.
Are doctors obliged to comply with requests for Euthanasia?

Answer:
No. Doctors are not obliged to comply with requests for Euthanasia as it’s not a routine medical procedure. The option of refusing a request for Euthanasia guarantees doctors’ freedom of conscience.