Youth, not just in India but around the world is pivotal in revolutions that have the potential to change the course and dynamics of that country. India’s freedom struggle is one such example where it was because of the active participation of the youth of India that we could attain freedom from the British Empire. In this essay on youth, we shall be talking about the importance of youth in a country and what they are capable of doing.

Find below long 600-word Essay on Youth for students and school-going children. A short Essay on Youth with a word limit of 200 can also be found here. The following essays given below can be used by students of class 6, 7, 8, 9 and 10 for their essay writing competition, exam, test, assignment and holiday homework.

The Hongkong protest in Hongkong against China, the Arab spring in various east Asian countries, the black lives matter protest in the USA and the anti CAA protests in India all have one thing in common, it was started and carried out into such a huge phenomenon by the youth of those countries. The participation of youth in political, social and economical changes in the world is not new. The French revolution, the Russian revolution, the American Revolution, the Indian independence movement and the slavery movements in Africa and America were all led by the youth of the world. There is something about the young generation that makes them dynamic and strong. It might be there energy or new ideas or fresh thought process in comparison to their previous generations that makes youth movements so successful around the world.

In this essay on youth, let us not confine ourselves to just about the political movements that the youth has been part of. The youth is much more important to a country and it’s future than just being a part of protests, revolutions and rallies.

India is not just the largest growing population in the world, but also the country with the highest population of youth and workforce. Much of the reason for India’s IT revolution at the turn of the 20th century is because of the youth of the country.  Information Technology (IT) and Information Technology Enabled Services (ITES) were given a massive boost after the dotcom bubble. With a massive population of 135 crore people, the workforce here in India worked for cheaper pay scale than in developed countries like USA or UK. This was beneficial for companies to reduce their cost and helped Indians to gain employment opportunities. This was a perfect example in Indian economy of Nash equilibrium also known as the win-win situation.

Much of India’s growth credit goes to the youth of the country. People from top colleges in India such as IITs, IIMs or Ivy League universities in the USA now own and run big business corporations in the world that is providing millions of jobs to people across different countries. It’s what we do when we are young is what decides how we will be when we grow up.

Most of the army, navy and airforce around the world is dominated by people below the age of 35. Because this is the age where we will be at the peak of our ambition, health and energy. Young people fight in the front lines to save the country from enemies. The youth of the nation is also increasingly getting into the political atmosphere of the country. In fact, India is known for its youth-driven politics with leaders like Rajiv Gandhi becoming the Prime Minister of the county at a very young age of 40.

It is the young people that excel in sports around the world. Sportsmen like Sachin Tendulkar or Roger Federer started their careers as young, energetic and innocent aspirants. One small essay on youth wouldn’t suffice to speak about the achievements of legends like Sachin or Federer. They are a source of huge inspiration to millions of people around the world to achieve their dreams through hard work and dedication.

When it comes to families and relationships, young people take a pivotal role in keeping the boat floating. They take care of their parents and siblings both financially and emotionally. In most of the cases,  they are the sole breadwinners of the family.

From politics and revolutions to sports and family and welfare, the importance of youth for a healthy society is to a great extent. Without youth, there wouldn’t be an all-round society. Youth is a part of every sphere of life from entertainment, sports, science, politics and family. Youth is considered to be the backbone of the country because they are in every spectrum of society like entertainment, sports, politics or science. The average age in India is 26, which means that India is a very young country in terms of its average age of the population. Given these statics, India can be the next biggest economy in the world if the potential of its youth is tapped into.

India has the largest workforce anywhere in the world, both skilled and unskilled. This also means that India can provide cheap jobs to international companies or multinational companies to attract investments to the country. This employment opportunity is fueled by a rising level of the education standards in India. Institutes like Indian Institute of Science Bangalore, Indian Institute of Management, Ahmadabad or Indian institute of Technology Bombay are the jewel in India’s economic development.

They are producing youth who are highly competent and talented that they are not only ruling many companies as of today, like Satya Nadella, CEO of Microsoft or Sundar Pichai, CEO of Google, the students are also developing start-ups and providing millions of job opportunities in India. It is the youth of the country that is helping in making India a truly self-reliant and independent country in the world.

10 lines on Youth Essay in English 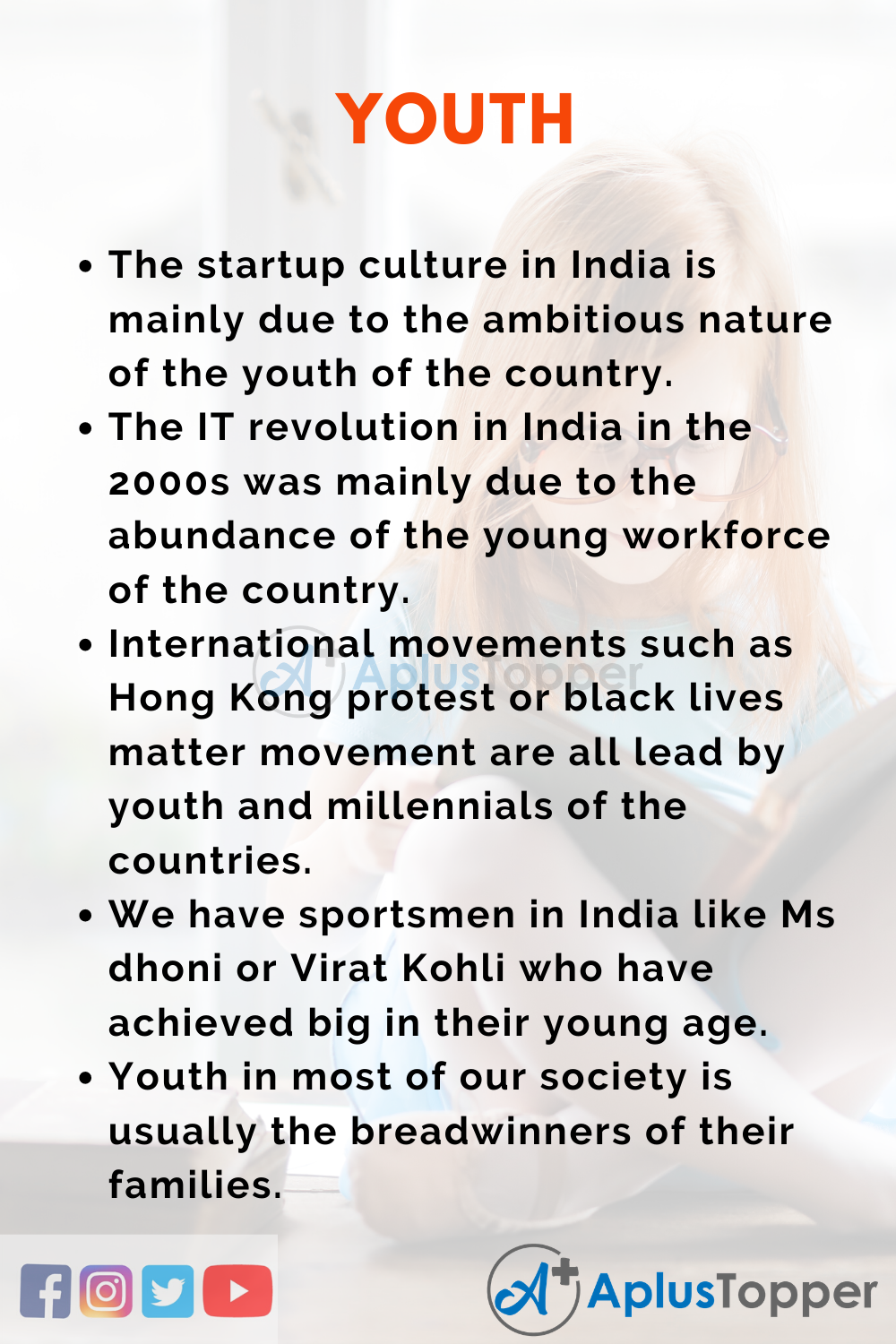 Question 1.
Who is the youngest Prime Minister of India?

Answer:
Rajiv Gandhi is the youngest Prime Minister of India at the age of 40 years.

Question 2.
What is the country with the youngest population in the world?

Answer:
Nigeria in West Africa has the youngest population in the world with an average or a median age of 15.

Question 3.
What’s the importance of youth in a country?

Answer:
Youth in a country is the driving force of society with a keen interest in politics, science and technology. They are the reason why gig-economy is booming in the world.

Question 4.
Who are a few young leaders in India?